Recently, I was fortunate to spend two fantastic days in the Ketona Dolomite Glades of Bibb County in central Alabama. I joined my good friends, Alan Cressler and Noah Yawn for a fun-filled day of botanizing in the remarkable, Kathy Stiles Freeland Bibb County Preserve photographing some of the many rare and endemic species found there.

In the paper entitled, “Vascular Flora of Ketona Dolomite Outcrops in Bibb County, Alabama“, the authors, JAMES R. ALLISON and TIMOTHY E. STEVENS state, “This ecosystem is apparently restricted to outcrops in Bibb County, Alabama, of the Ketona Formation, an unusually pure dolomite. Woody aspect dominant is Juniperus virginiana or Eastern Red Cedar, the herbaceous dominant, Amsonia ciliata var. tenuifolia or Fringed Bluestar. These are all within a zone about 11 miles (~18 km) long and at most about 0.5 miles (~0.8 km) wide, within the southern ‘fringe’ of the Ridge and Valley Physiographic Province.” This narrow band of pure dolomite is exposed in dozens of outcrops.

The authors go on to say, “Glades developing on the Ketona Dolomite (Ketona Glades) vary in size from about 0.25 acres (0.1 hectare) to at least 12 acres (~5 hectares) and have a general appearance resembling the cedar glades developed over limestone or dolomite in Alabama, Georgia, Kentucky, and Tennessee, though they are seldom as level as ‘classic’ cedar glades. The terrain is mostly gently sloping or rolling, but varies from flat to sometimes very strongly sloping. There are patches of exposed bedrock, thin-soiled areas dominated by grasses and other herbaceous vegetation, variously sized islands and peninsulas of woody vegetation where soil has accumulated to greater depth, and marginal ecotones where the glade grades into the surrounding forest. In many areas the bedrock projects above the surrounding surface as low boulders or ledges.”

Here is an image of one of the glades we visited: 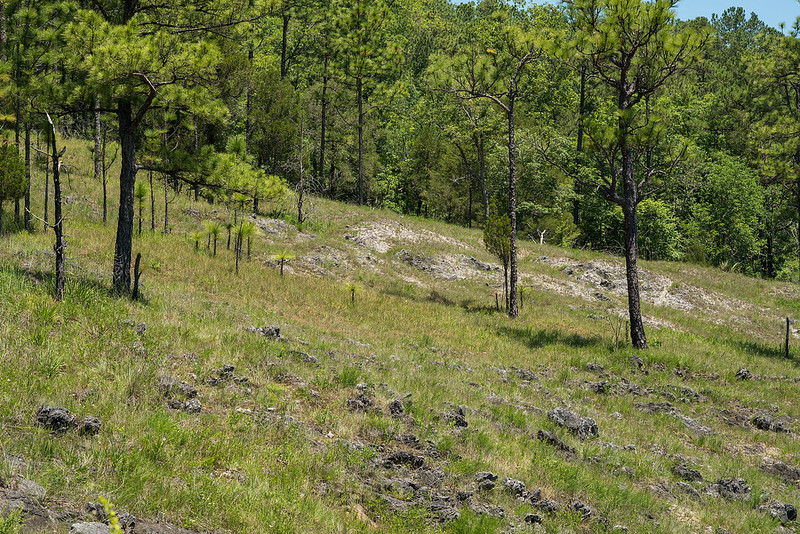 There was so much to see and photograph, that I have decided to split this trip into two parts. This first part will showcase my three target species:Spigelia alabamensis or Alabama Pinkroot, Dalea cahaba or Cahaba Prairie Clover, and Clematis glaucophylla or Whiteleaf Leather Flower. Fortunately for me, we found a number of them in perfect bloom. 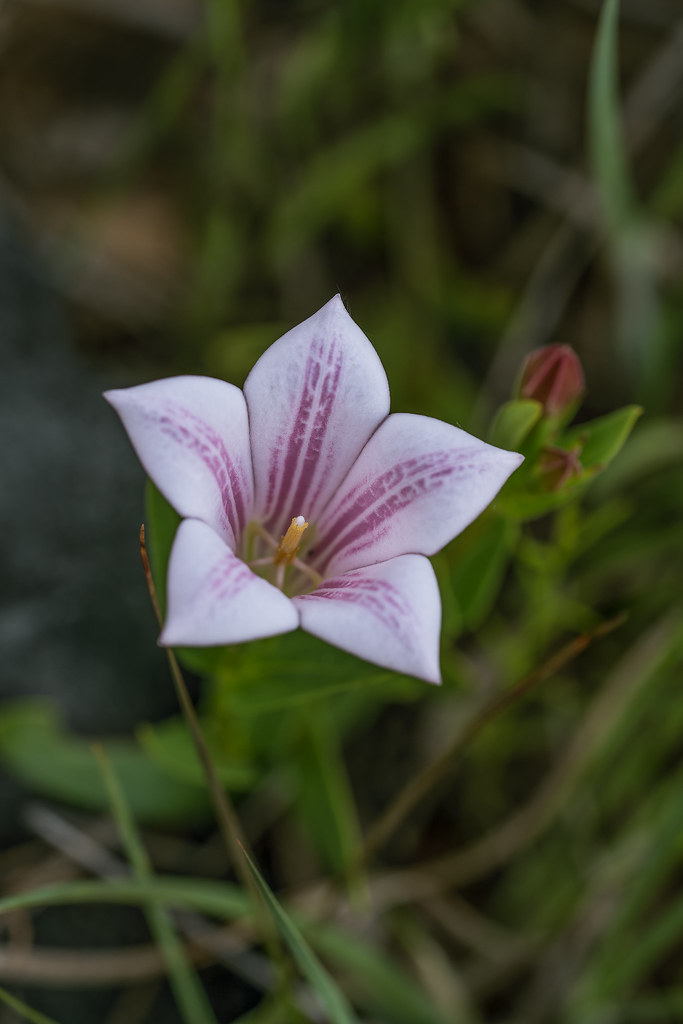 Alabama Pinkroot is an Alabama endemic found only in Bibb County, Alabama at the Ketona Dolomite Glades. Here is a range distribution map from bonap.org, The Biota of North America Program of North American Vascular Flora: 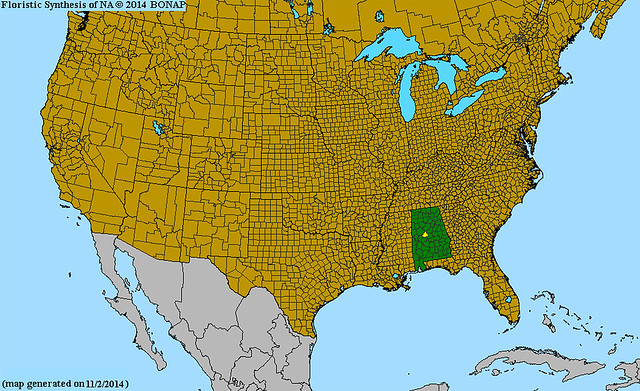 Before our visit to the Glades, I had seen many images of the Alabama Pinkroot on the internet, and I had marveled at the varying pattern of stripes on the petals. My hope was to find and photograph some of this variation. As it turns out, the flowers do not open fully until mid- to late afternoon, so Alan suggested that we visit one of the glades which hosts this species the afternoon we arrived. We would be spending the night nearby and would be conducting a more extensive visit the next day. Good thing he suggested that, because the flowers were still closed the next day when it was time for me to return home. But, in the late afternoon visit the first day, we saw many dozens of open flowers. Here is a selection of the Alabama Pinkroot showing the variation of striped pattern on the petals. The flowers are slightly less than 1 inch (2.5 cm) across:

We scoured the area for the elusive pure white form that Noah saw a week ago, but we never found it. I wasn’t surprised though, because the flowers do not last more than a day or so, and we would have to locate that plant again, hoping it had additional buds.

There is another species that closely resembles Alabama Pinkroot, and it is found in two counties in extreme southeastern Alabama and three counties in adjoining Florida Panhandle. It is named, Spigelia gentianoides or Gentian Pinkroot. For all intents and purposes, the flowers resemble the Alabama Pinkroot buds, but the buds of Gentian Pinkroot never fully open — they remain closed as do many Gentian flowers, although it is a Spigelia, not a Gentian. Here are a few images I took in Gadsen County, Florida on the same day of the year, 2016:

The second target species for this trip was Dalea cahaba or Cahaba Prairie Clover. Now is a good time to mention the use of the term, “Cahaba”. A number of species found in the Glades have this term as part of their name, and that is because the Ketona Dolomite Glades is transected by the Little Cahaba River. According to the Encyclopedia of Alabama, the name, Cahaba, “is thought to come from either two Choctaw words meaning ‘water above’ or a Creek word for the native cane that covered the river valleys.”

As is with many field trips, not all target species bloom at the same time. It is so with the Cahaba Prairie Clover, but we did manage to locate a few photographable plants. This species is low-growing, native herbaceous perennial in the Bean family (Fabaceae). It, too, is an endemic to the Ketona Dolomite Glades. Here is a range distribution map from bonap.org: 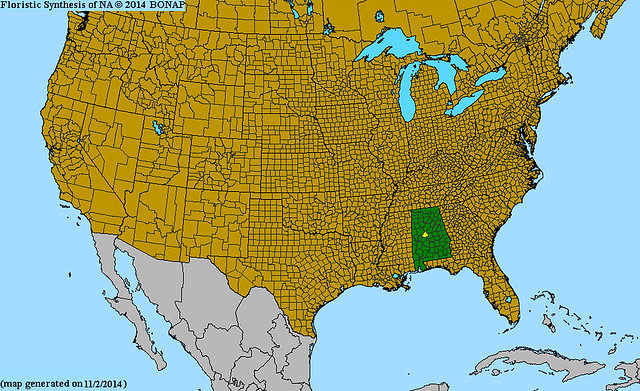 Hmmmmm….. does this look familiar? It should. It’s the same distribution map as for Alabama Pinkroot.

As I just mentioned, we managed to find only a couple of blooming plants. Here are images of them:

It’s a pretty little thing, but it is remarkably difficult to spot against the other vegetation in the glade.

The third of my three target species was Clematis glaucophylla or Whiteleaf Leather Flower. The specific epithet, “glaucophylla”, means “having a glaucous leaf”, where “glaucous” means “of a dull grayish-green or blue color or covered with a powdery bloom like that on grapes.” This color is present on the underside of the leaf. The flower, itself, is bell-shaped and lacks petals. The sepals are dark rose-pink on the exterior and pale yellow-white on the interior with recurved tips. It is oddly shaped but never-the-less, a beautiful flower. Here is the range distribution map from bonap.org: 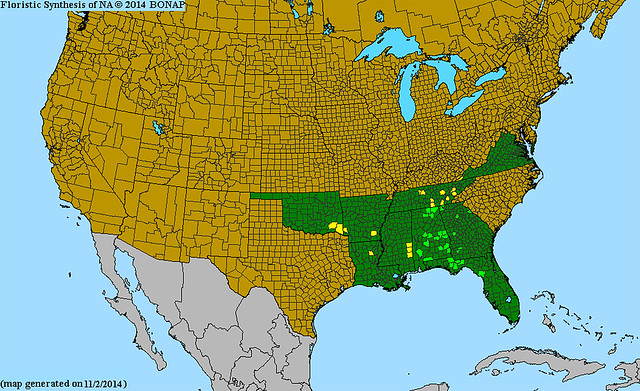 Although it seems to be widely scattered in the Southeast, it is not at all plentiful in any of the sites where it can be found. Here are a couple of images of this beautiful wildflower. The first image shows the vine as it is draped over Croton alabamensis or Alabama Croton, another Ketona Dolomite Glades endemic: 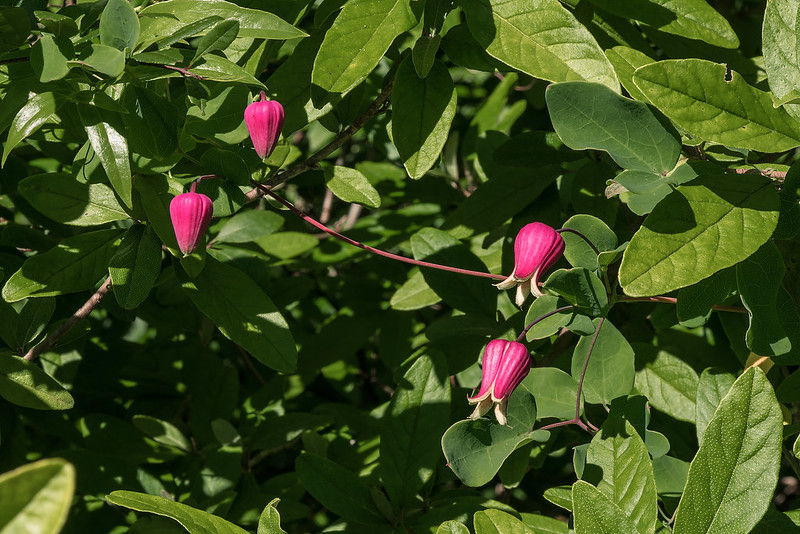 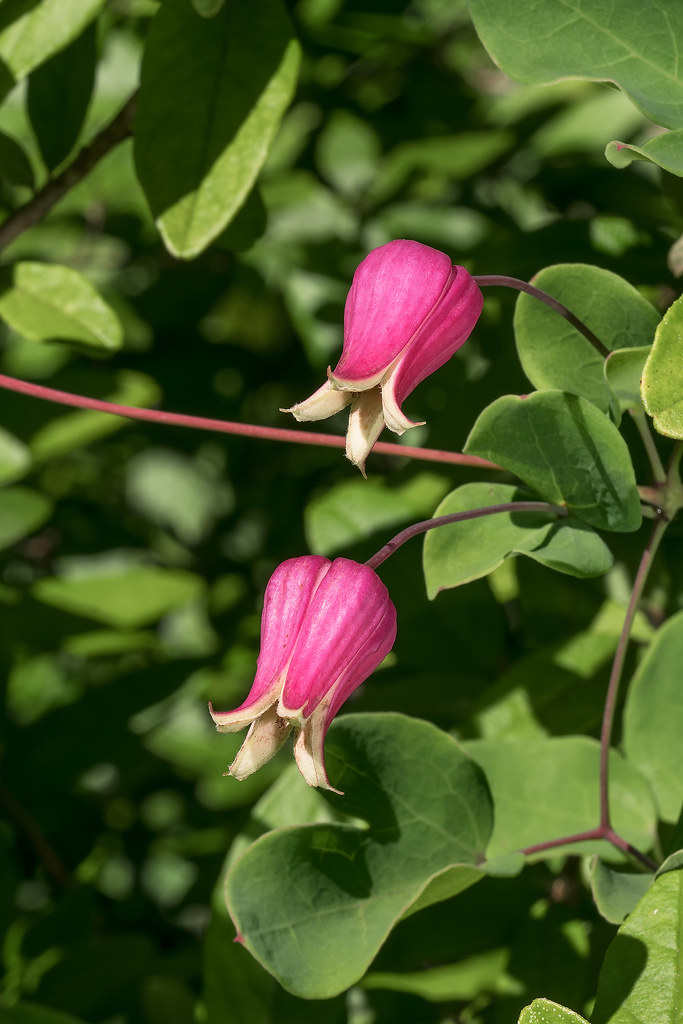 I am really fortunate to have Alan and Noah as my friends. As naturalists and photographers, they both spend an extraordinary amount of time in the field searching for unique and beautiful locations for plants. Over the years, I have gained their trust so that they feel safe taking me to many of their “special” places. As a blogger and photographer, I get a lot of requests to divulge these sites which I spotlight in my blog reports. But, it would be a betrayal of their trust for me to do so. I know it is difficult especially when you are just getting started, to find locations for rare wildflowers, but it takes time and effort and a great deal of networking among like-minded individuals. Nothing worthwhile comes easy.

This has been a good year for botanizing, even considering the Covid-19 predicament we are currently experiencing. But going outside and seeing nature at its best can’t help but be beneficial for the body as well as the soul. I hope I will be able to provide you with additional adventures in the future — I’m keeping my fingers crossed.