Warning: This will be a lengthy post, so settle back with an adult beverage and enjoy…

After spending the night at a motel in Little River, South Carolina, we awoke bright and bushy-tailed, got dressed and ate our meager continental breakfast. With fresh memories of the previous day’s field trip in the Francis Marion National Forest, we packed our gear, checked out of the motel, and headed north on US Hwy. 17, Ocean Highway, toward Supply, North Carolina, the nearest town to the Green Swamp Preserve. Walter Ezell and I had planned to meet Jim Brighton, Jared Satchell, and Kelvin Taylor at “The Pond”, a borrow pit which is a landmark for those botanizing in the Green Swamp. The meeting time was set for 8:30 am.

We arrived and found that Kelvin had just arrived and was waiting for us. A few minutes later, Jim and Jared showed up and parked next to our vehicles. Jim told me that he had invited Eric Ungberg, a graduate student in the Department of Botany at the University of North Carolina, to join us. I had met Eric a couple of years prior to this visit, and I was happy to see him again.

So, we chatted a bit about the “plan”, and we decided to head off to one of the nearby grassy, longleaf pine savannahs where we would hopefully find the rare, Parnassia caroliniana or Carolina Grass-of-Parnassus in full bloom. This species’ status is “S2”, which means: Imperiled in North Carolina due to rarity or some factor(s) making it very vulnerable to extirpation from the state. Typically six to 20 occurrences or few remaining individuals (1,000 to 3,000). This particular site is fairly reliable with many dozens of blooming plants. Here is an example of the flower of Carolina Grass-of-Parnassus: 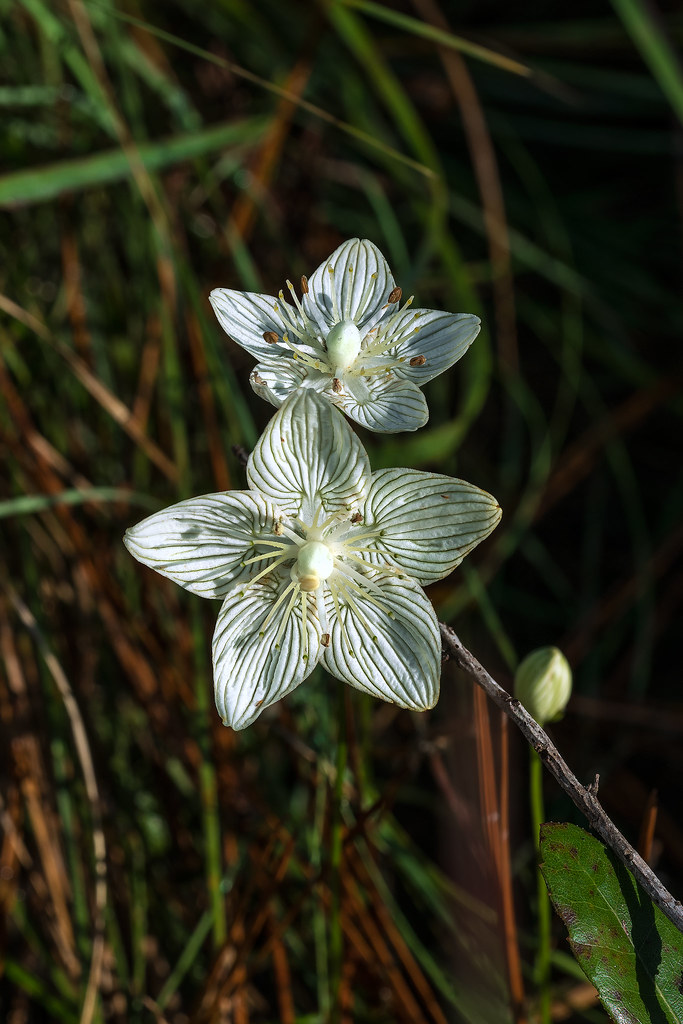 Along the way down the trail, we checked the trailside for another showy wildflower species, Gentiana autumnalis or Pine Barren Gentian, and we found a few, but the flowers were closed. The flowers of most of our Gentian species close at night and do not open again until mid-day. Because it was still early morning, we decided that we would return around noon to check on them again.

We finally made it across the grassy savannah to the ecotone between the grassy savannah and the dense, impenetrable pocosin where we found many scattered Carolina Grass-of-Parnassus flowers in full bloom. We set about trying to select the best ones — a difficult task, seeing as there were so many of them in perfect shape. Here are a few shots of those we saw: 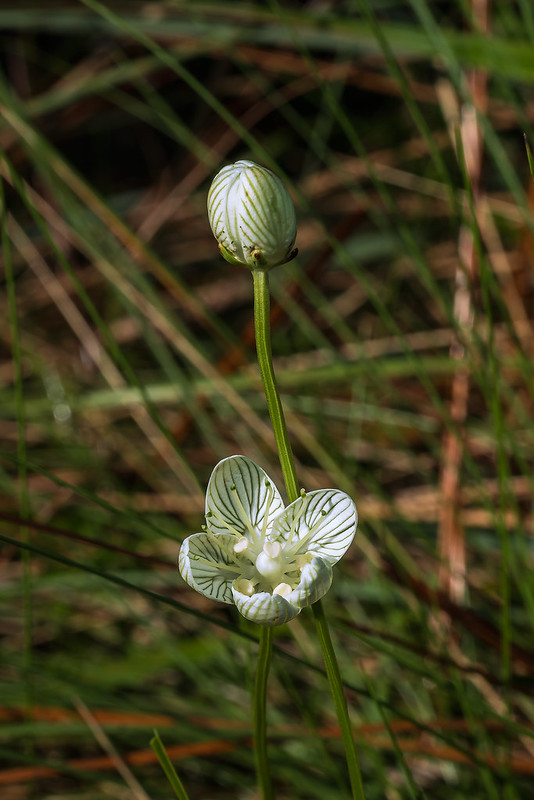 Here are a couple of shots Walter took of the group busy with botanical things: 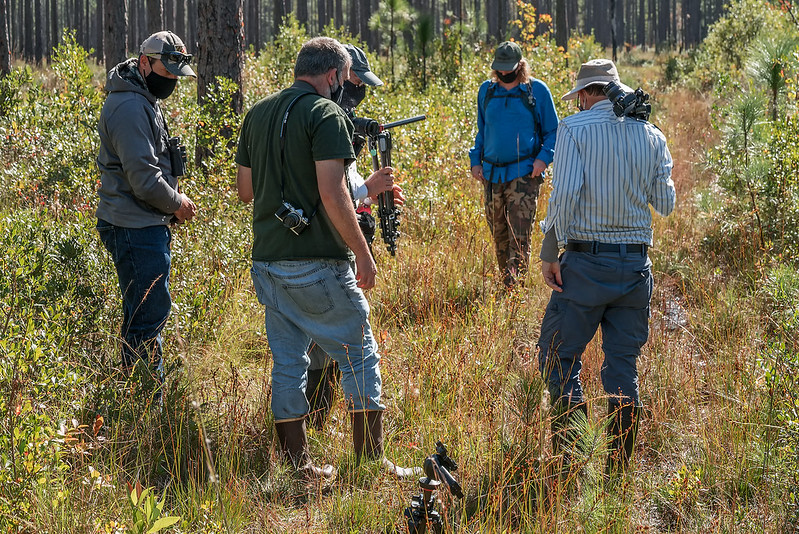 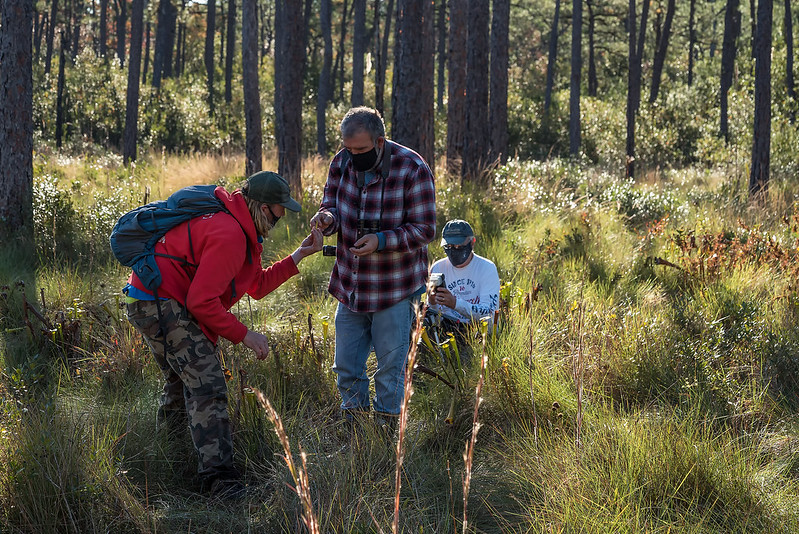 Another species we found to be delightful was Nabalus (formerly Prenanthes) autumnalis or Slender Rattlesnake-root. This is a beautiful light-pink flowering species in which the blooms open from the top down. It was still a bit early, so the flowers were not completely open, but it was too nice to pass up. Spoiler alert: We would find some that were fully open, later on… Anyway, here is one of them: 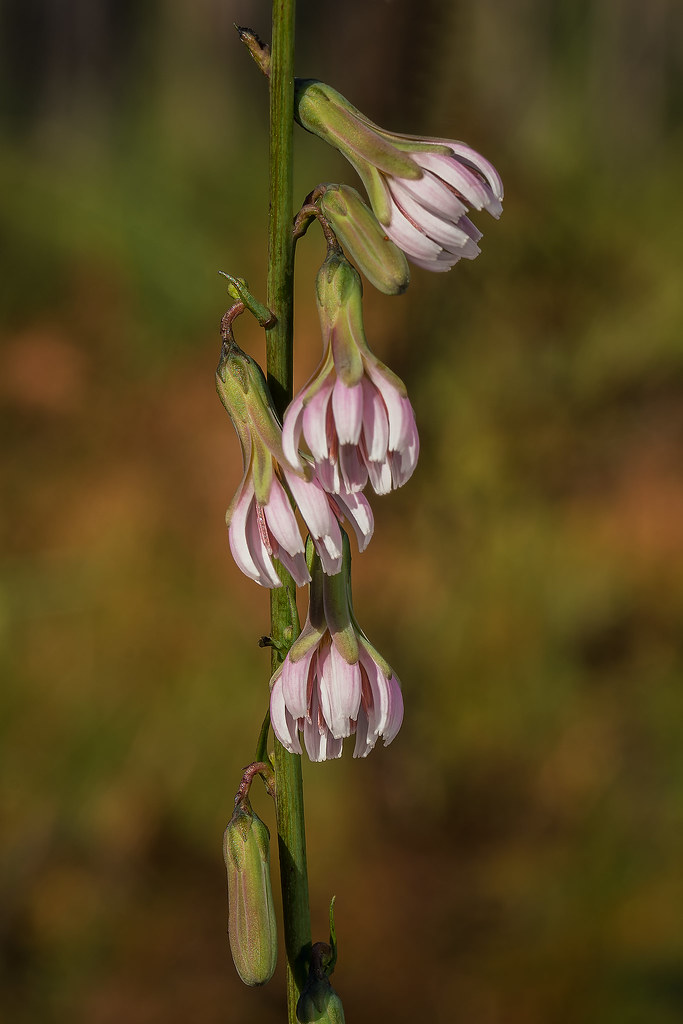 We also found a number of Pitcher Plant species that were somewhat ratty this late in the season, but were worth photographing for documentation. The first of these is Sarracenia flava or Yellow Pitcher Plant, one of the more common Pitcher Plant species in the Green Swamp Preserve. Below left, is a typical pitcher, and below right is a seed capsule structure that is typical of this species:

The rounded structure in the center is what contains the ripening seeds.

Another fairly common Pitcher Plant species for the area is Sarracenia purpurea subsp. venosa or Southern Purple Pitcher Plant. In late summer, the pitchers turn a deep red and are actually quite attractive: 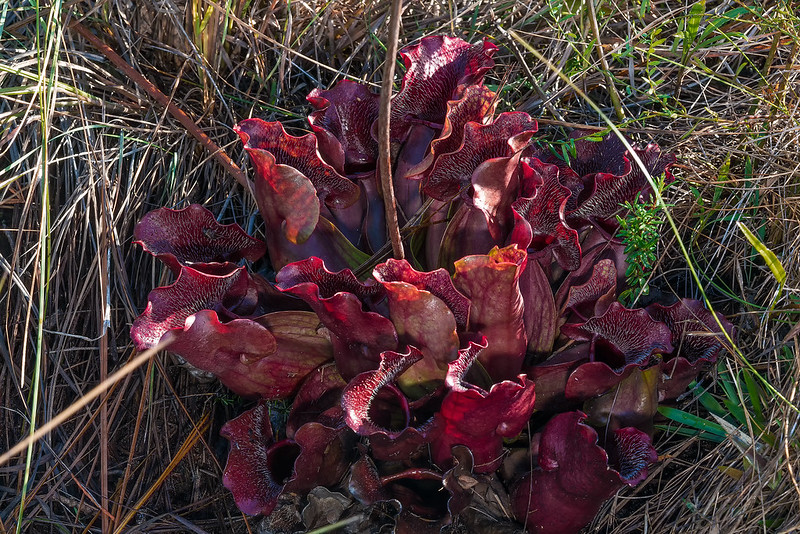 Finally, we found a surprise! It was a hybrid between Sarracenia flava or Yellow Pitcher Plant and Sarracenia purpurea subsp. venosa or Southern Purple Pitcher Plant. This hybrid is known as Sarracenia Xcatesbaei or Catesby’s Hybrid Pitcher Plant. Kelvin spotted this one, and we were all excited to photograph it: 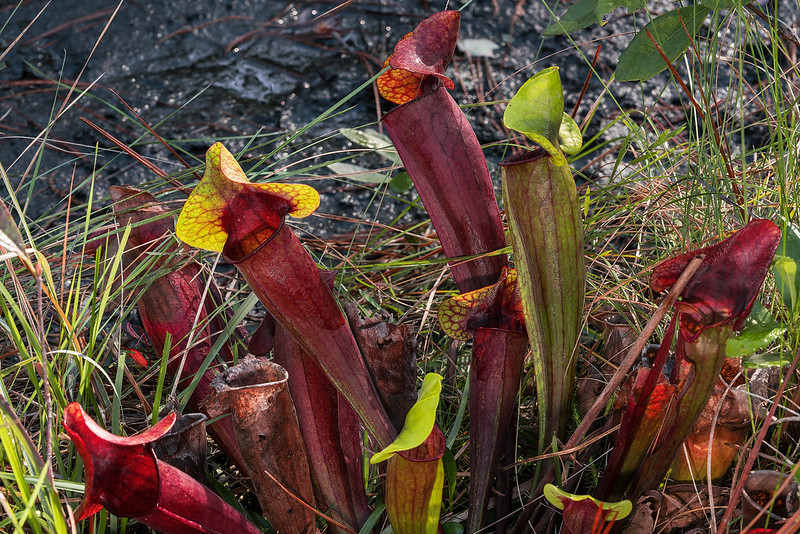 After a couple of hours, we finally made it back to where we had seen the Pine Barren Gentians, but they were still not fully open, so we decided to head to another Longleaf Pine savannah to try to find Spiranthes longilabris or Long-lipped Ladies’-tresses orchid. This species is listed as “S1”, which means, critically imperiled due to extreme rarity or some factor(s) making it especially vulnerable to extirpation (local extinction) from the state. Typically 5 or fewer occurrences or very few remaining individuals (less than 1,000).

In the past we have seen as many as a dozen blooming plants or as few as 0 at this site, so we were anxious to see what might await us. We arrived and crossed a deep, water-filled ditch using an 8-foot (2.5 meter) board that had been placed across the ditch for a precarious crossing. We quickly spread out into the grassy savannah where Kelvin immediately spotted a handful of blooming plants! Yay, Kelvin!!! In no time, we had spotted a couple of dozen blooming plants — some in better shape than others, but still, lots to choose from. Here are some shots of these beauties: 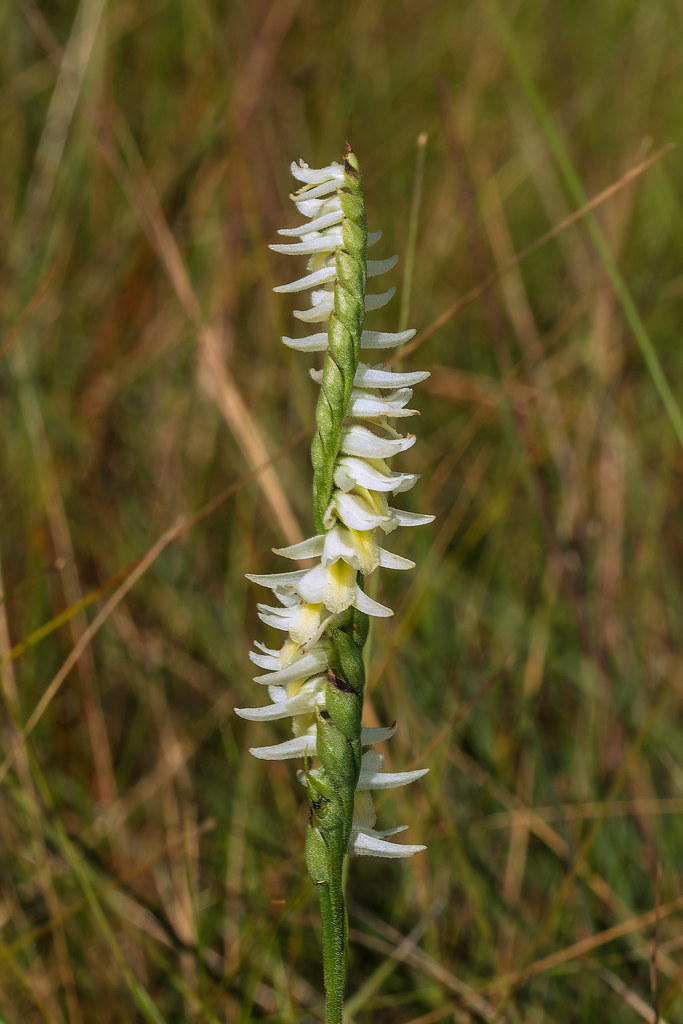 After finishing up in this grassy savannah, we packed our gear and headed north to another larger savannah where I had seen Long-lipped Ladies’-tresses orchids in the past. We arrived and proceeded to go to the grassy spot where I had seen the orchids in the past. Unfortunately, none were found. But, on our way back to the vehicles, we spotted some Slender Rattlesnake-root plants with open flowers! And these were quite nice: 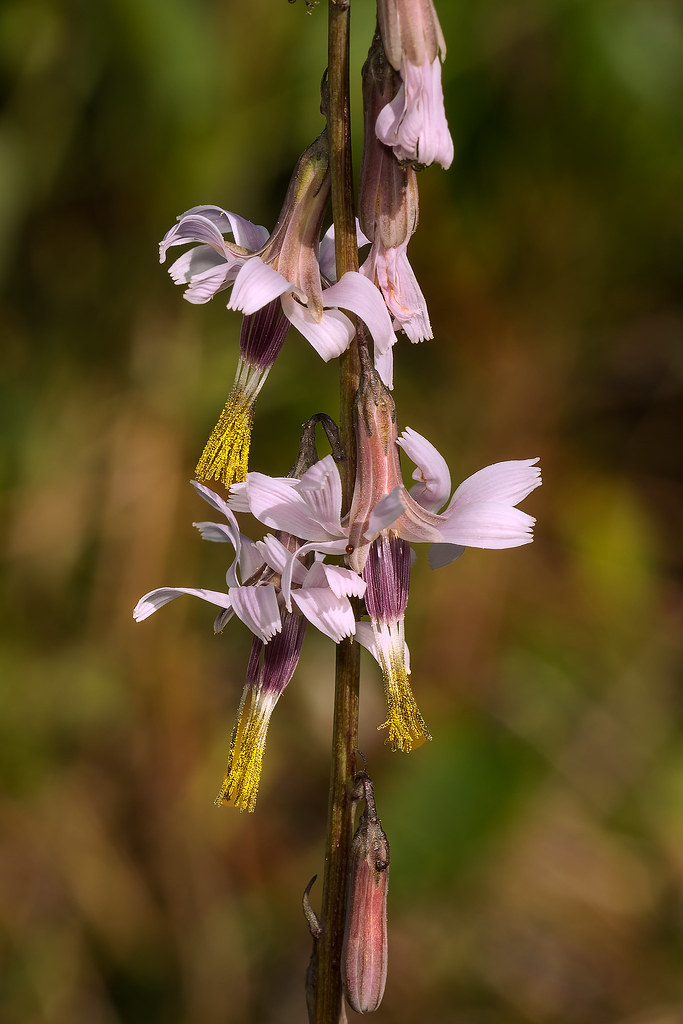 Now, we felt it was late enough in the day that the Pine Barren Gentians should be open, so we hiked back to that area to check them out. Sure enough, we found a dozen or more of those electric blue flowers in full bloom. Here is what we saw:

Two, atypical, 4-petalled flowers, one with a Syrphid species or Hoverfly aiming to capture some nectar or pollen: 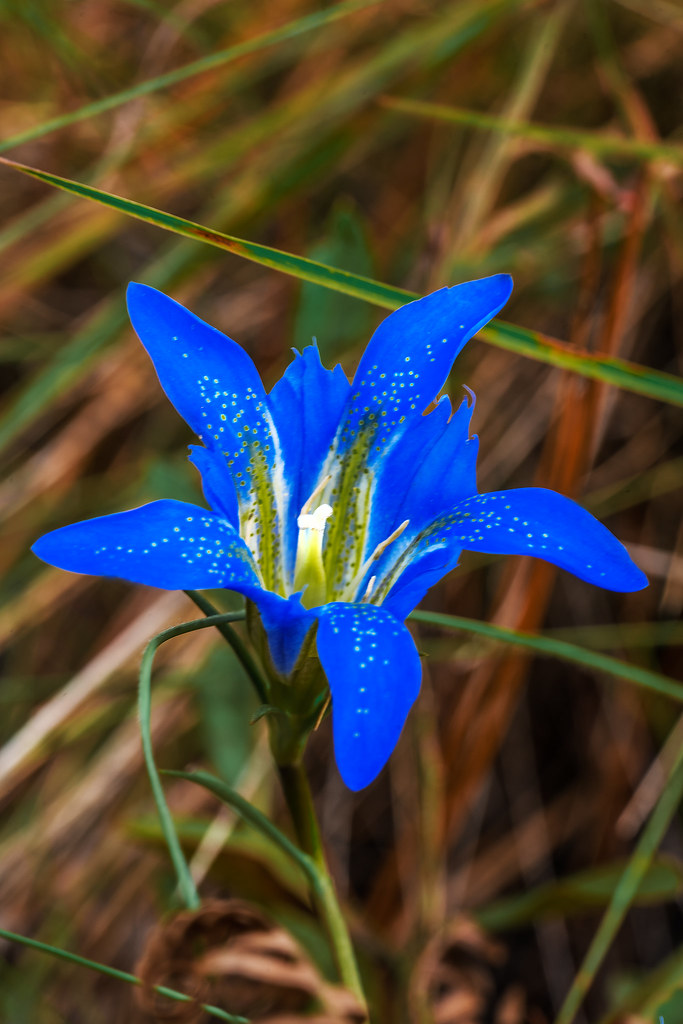 Now was time to head to another area about 20 miles (32 km) to the east: Boiling Spring Lakes. This area has always intrigued me because it is fairly heavily populated, but it also manages to host many orchids and other wildflower species along the roadside ditches. The first stop was to check out the ditches for Spiranthes cernua or Nodding Ladies’-tresses orchid. This one is very similar to the Fragrant Ladies’-tresses orchids that we found the day before in the swamps of the Francis Marion National Forest, but it is quite a bit smaller and has no noticeable fragrance. Here is a shot of the crew lined up along a ditch bank photographing these small orchids: 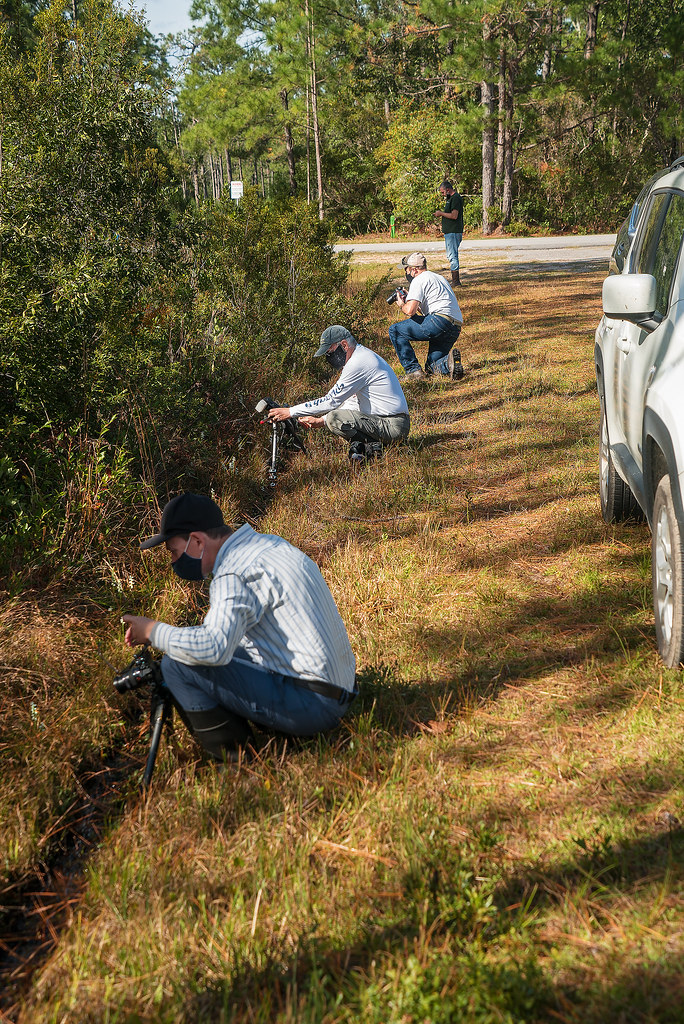 Left to right: Kelvin Taylor, Jim Fowler, Jared Satchell, and Jim Brighton. If you wonder why Walter is not in any of these people shots, he is the one that took these candid shots.

After the ditch episode, we drove around a bit to try to locate some additional orchids, but we didn’t find any better than at this first stop. Here are a few examples: 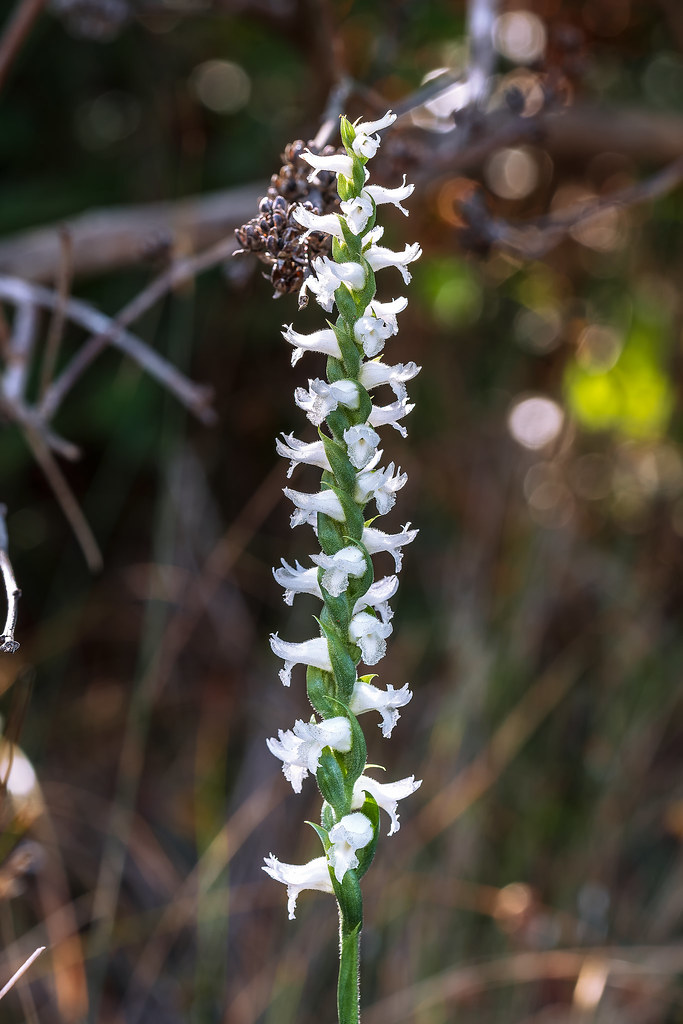 We finished up at this site and headed to the final site of the day: Rice Creek. Here, I had seen some really nice Spiranthes odorata or Fragrant Ladies’-tresses orchids in the past. The site is a bottom-land swamp that is often complete flooded — something that these orchids just thrive in. This species is quite similar to the previous Ladies’-tresses orchids I just posted, but they are much more colorful and robust; some getting to be 3-4 feet (90-120 cm) tall! And, they are very fragrant. Here is a good sampling of some of the large colonies of this orchid species we found. Many of them growing just next to Rice Creek:

As I said, there were some rather large groups of this orchid species nearby: 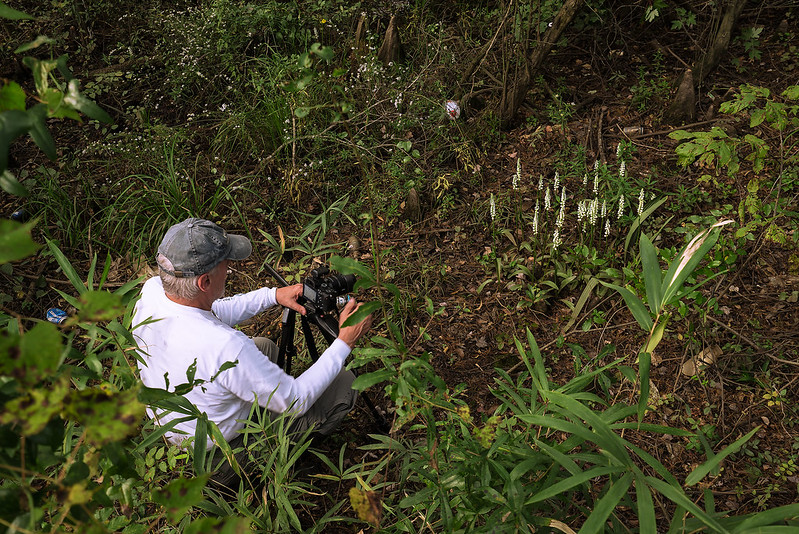 This is the result of that effort in the above shot: 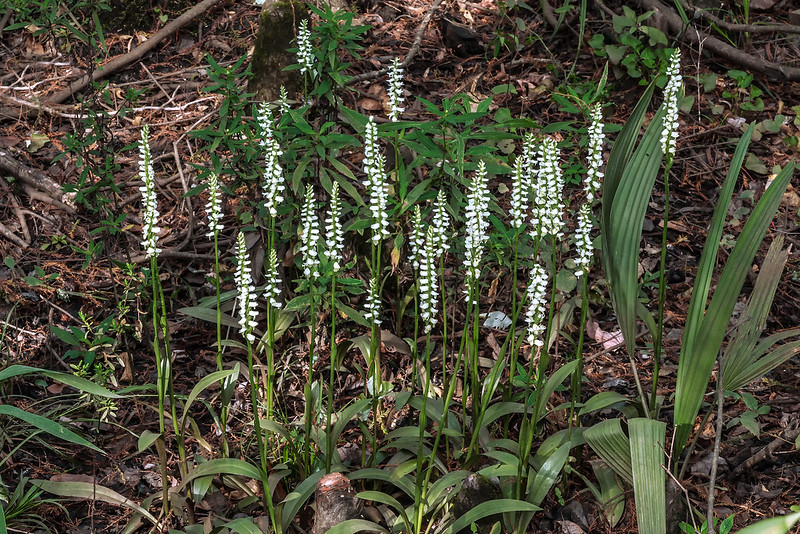 Another group deeper into the swampy woods: 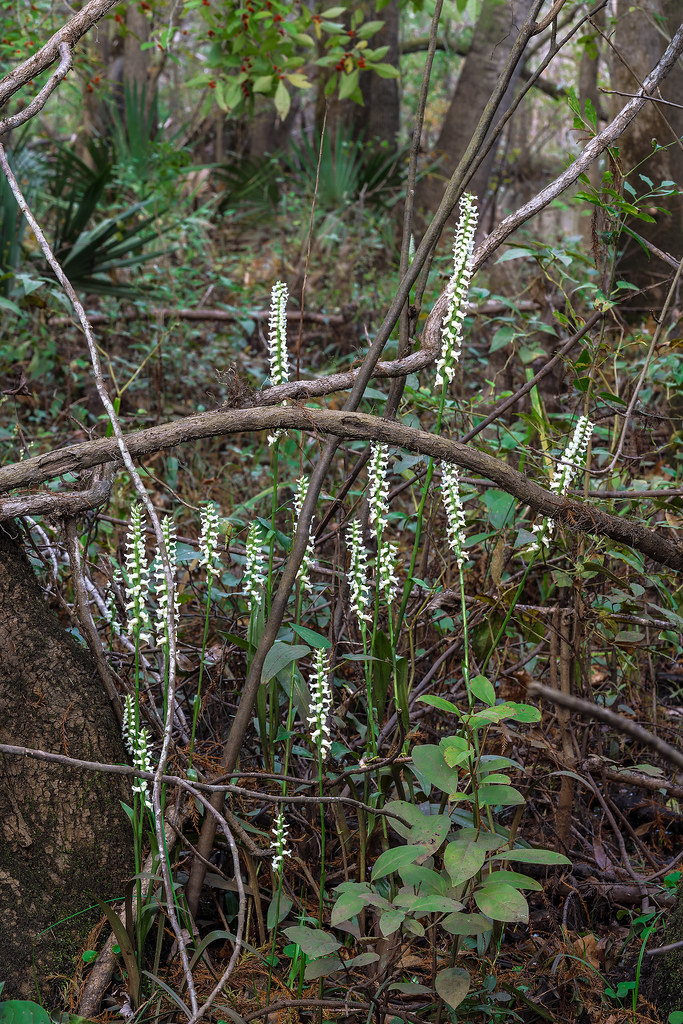 Finally, I think we were all worn out from the excitement of seeing so much botanical beauty. We sat around and chatted about the activities of the day, and we actually made some plans for future trips. This was a really fun day for me, but Walter and I had a 5-hour trip ahead of us. Jim and Jared said that they wanted to try their hand at fishing this creek for a while, so we said out goodbyes and packed our gear for the trip home: 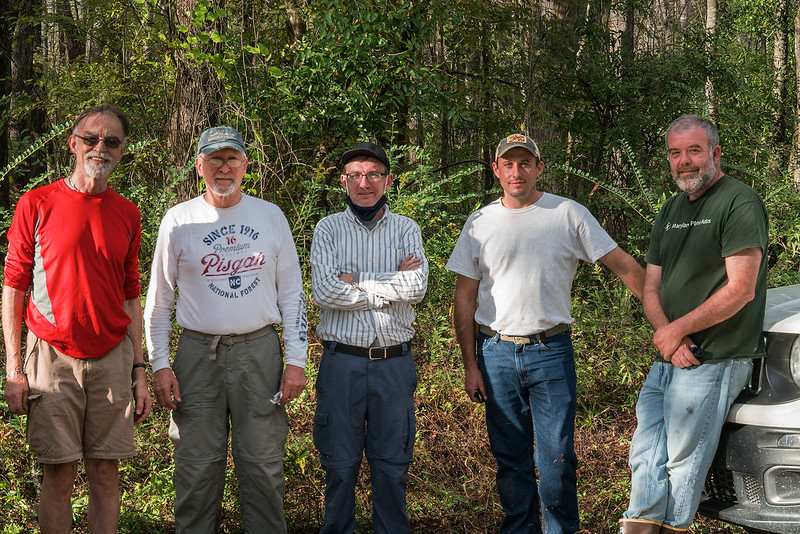 Most of the fun of being out in the field, for me anyway, is losing myself in the natural beauty of places most people would try to avoid. The swamps and thickets of the Carolina Coastal Plain are good examples of this. Fortunately, I know of some people who like the same thing as I do, and it is fun to get together with them, even if it is for the first time, and share the adventure.

This is most likely the last post of the year. This also winds up 8 years of Jim’s Nature Blog. I hope you have gotten some pleasure from my images and my geeky way of presenting the trip details. It has been fun for me to share these adventures with you.