Well folks, I am so excited! Today, I went to an area of the Pisgah National Forest north of Brevard, North Carolina in search of some mid-summer orchids — specifically, Platanthera ciliaris or Yellow Fringed orchid and Spiranthes lacera var. gracilis or Southern Slender Ladies’-tresses orchid. I did actually find those two species in bloom, but before I got to the location where those two were growing, I stopped at my favorite spot for Triphora trianthophora or Three-birds orchid.

This is a spot that my naturalist friend, Neil Jacobs told me about several years ago. He and his wife, Jen Modliszewski found it while he was fishing and she was photographing wildflowers along the Davidson River. I’ve been back to the site several times each year for the last five or six years, enjoying the Three-birds orchids in season.

Funny thing about this particular orchid species: It blooms only after a few, rather specific meteorological conditions have been met, and then for only a few hours that day. After those flowers are past, it may be a week or two before it blooms again. Here are the specific conditions I rely on to predict a wave of blooms:

There must be at least a 5-degree (F) drop in morning low temperatures over 48 hours. Then, 48 hours later, there will be a mass blooming — all the flowers at a certain stage of “readiness” will all open together. It’s that simple! Over the next few weeks to a month, there may be several of these mass bloomings, so if you miss the first one, there’s usually another.

So, for the past few days, I’ve been checking my charts to see if a bloom will be happening anytime soon. I refer to the website, www.wunderground.com/weatherstation/WXDailyHistory, and go to the weather station information for Pisgah National Forest. I check the morning low temperatures and plot them on a simple graph. From Sunday, July 27 through Wednesday, July 30, there was a 15-degree (F) drop in morning low temperatures — from 67.5 degrees (F) down to 52.5 degrees (F)! This meant that 48 hours later (today, Friday, August 1), there should be a mass blooming.

On our way to the Blue Ridge Parkway for some wildflower photography, my Atlanta photography buddy, Alan Cressler and I had visited the Three-birds orchid site the previous Saturday, but saw only tightly closed buds. Today, however, was a different matter. I don’t think I’ve ever seen so many of these dainty little orchids in bloom at one time. Most of the plants are scattered, single plants or groups of three or four, but there can be some rather large clumps. Here is an image of the largest clump I found today: 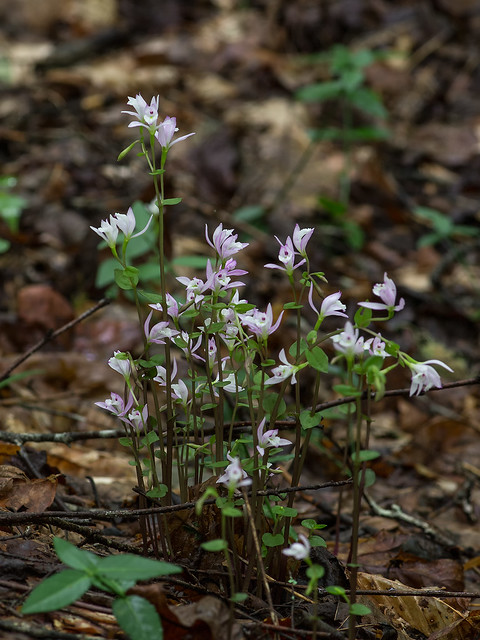 At this site, the flowers vary in color from almost pure white, to white tinged with pinkish-purple. What I have always been looking for, though, is the alba form of this orchid. It will have pure white sepals and petals with no hint of pink or purple, and rather than rows of green ridges on the lip, it will have rows of bright yellow ridges. The only image I have ever seen of this form is in Phil Keenan’s book, “Wild Orchids Across North America”, [Timber Press, 2000]. He saw only a single plant in New Hampshire, but he saw it bloom over several seasons. He named the form, Triphora trianthophora forma albidoflava.

Well today, I found not one, but two flowering plants exhibiting these characteristics! Here are a few images of the single-flowered plant (with an unopened bud) as well as a two-flowered plant: 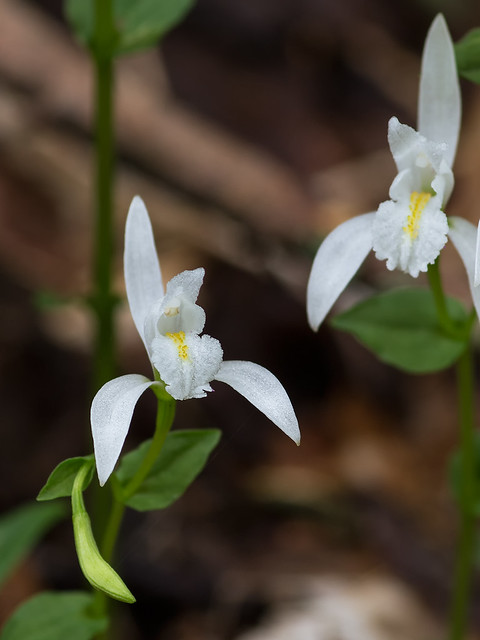 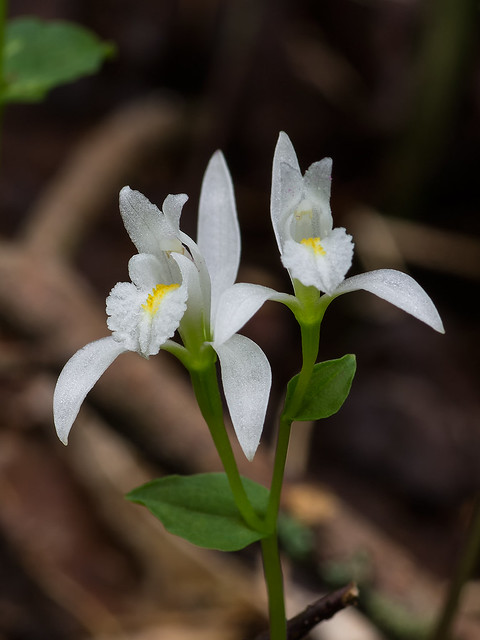 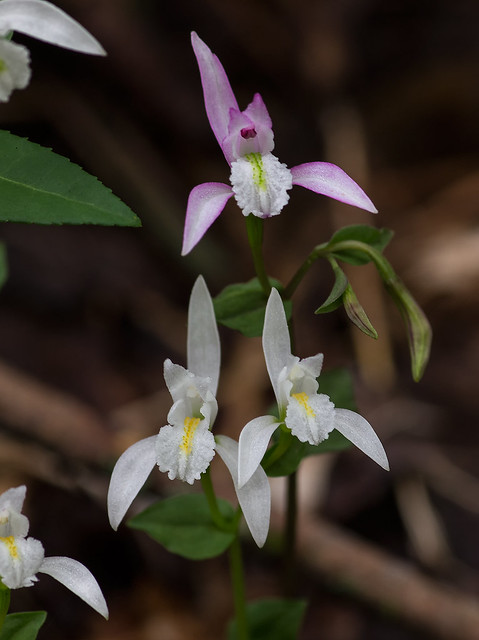 In that last shot (directly above), notice the pinkish-purple flower above the two white ones — that’s a typical flower from a different plant. Note the green ridges on its lip. I was photographing this trio, when I noticed that the two white flowers had yellow lip ridges. Now, unless you are a botanist geek, you probably won’t appreciate my excitement, and the bad thing about it is that I was alone today and didn’t have anyone to share it with. I have seen probably hundreds of thousands of these tiny 1/2-inch (1 cm) flowers since I have been visiting this site over the years, and I have always been on the lookout for the alba form. It’s rather difficult to do when your eyes are about 6 feet (2 meters) above the flowers. The plants are only a few inches tall. Over the years, I’ve spotted many, many white flowers that turned out to have green lip ridges… I usually try follow Phil’s admonition, “Get down on your hands and knees, and use a hand lens to see what all the fuss is about.”

I spent several hours in and around the area, photographing lots of these beauties in full bloom, knowing that by late this afternoon, all of the opened flowers will close and droop. As I stated earlier, it may be up to several weeks before the next wave of blooming occurs.

Here are some more images of the plants I saw at this site in the Pisgah National Forest, north of Brevard, North Carolina: 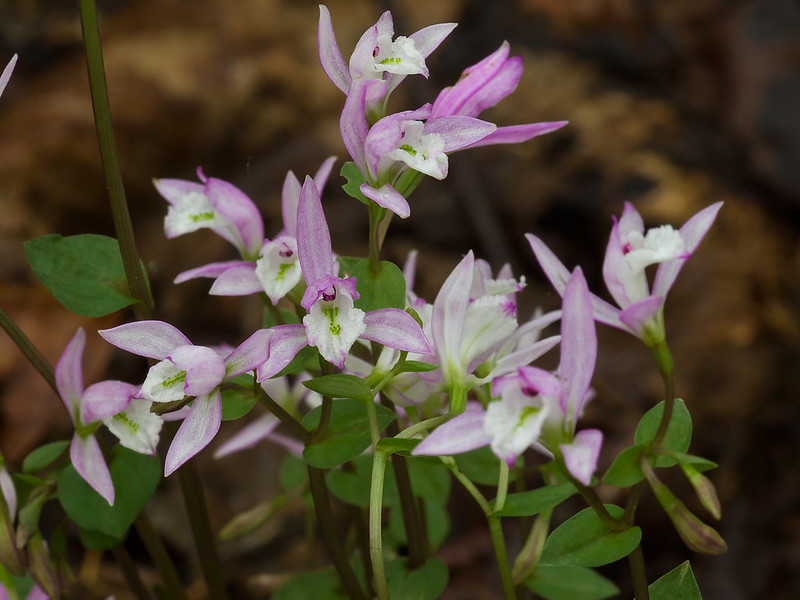 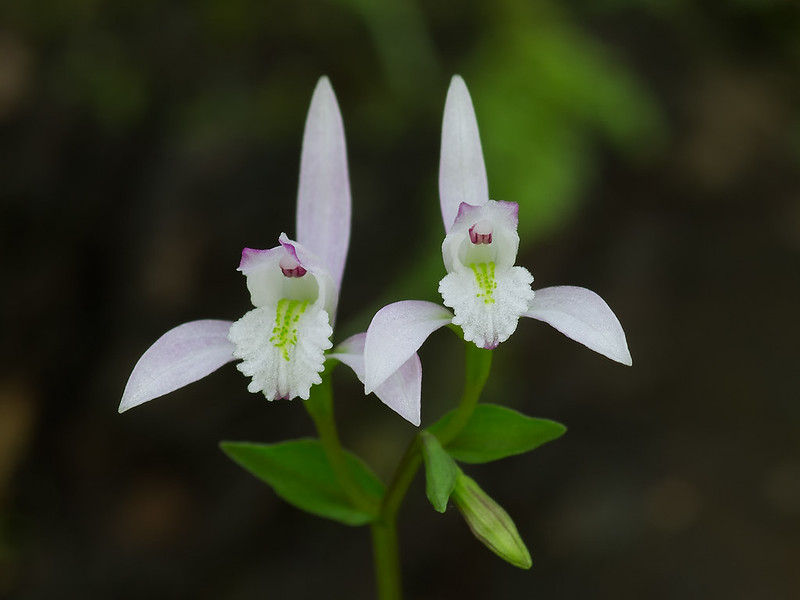 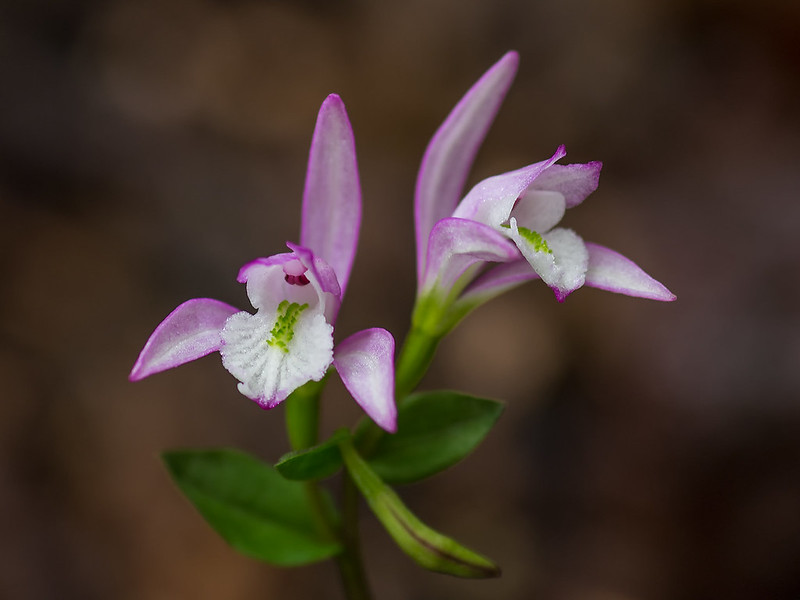 Knock on wood — so far, this has been an exceptional year for us in our pursuit of North American native orchids. We live in an area that is so floristically diverse and provides many hundreds of species of wildflowers and orchids to photograph during the year. There is always something new to see around the next bend. The year is not over, by a long shot, but I should be staying in the Carolinas for the next few adventures. Stay tuned…