The 6-hour drive down from my home in Greenville, South Carolina to southeast Georgia (within a few miles of the Florida border) was fairly uneventful. However, when I reached the motel at 3:30 pm, it was 102 degrees F (39 degrees C), and the humidity was astronomically high. Fortunately, I didn’t have any plans to go out into the field until the next morning. The “plan” was to meet four other friends and head toward a few locations that I had seen two weeks prior when I was shown some interesting botanical sites by Matt Richards, the Conservation Coordinator at the Atlanta Botanical Garden.

As the evening wore on, I kept getting calls from friends who were bailing out of the trip — all for very good reasons. Eventually, only one of my invitees would show up — my friend Sam Saulys, who was flying down from Connecticut. She had wanted to photograph Pteroglossaspis ecristata or Spiked Medusa orchid for years, but the opportunity had not presented itself until I invited her down for a promised bloom of that strange orchid. We met in Folkston, Georgia and began our botanizing and photographing day at the Spiked Medusa orchid site south of Folkston.

Pteroglossaspis ecristata is a very strange-looking orchid, indeed. Its color is variable — sepals and petals range from yellow to pinkish purple depending on the region where they grow. In central Florida, the sepals and petals are generally yellow, while in coastal plain of South Carolina, they are purple. The ones we saw in southeast Georgia were an intermediate, greenish purple. The lip is always some shade of maroon or mahogany. The oddest characteristic of this orchid is the manner in which the flowers are presented on the bloom stem. They are usually tightly pressed to the stem and seem to be oddly twisted. It is difficult to get a decent shot of the flowers without shooting it from underneath the inflorescence.

Here is a shot of one of the 100 or so inflorescences we saw scattered over the large, clear-cut site: 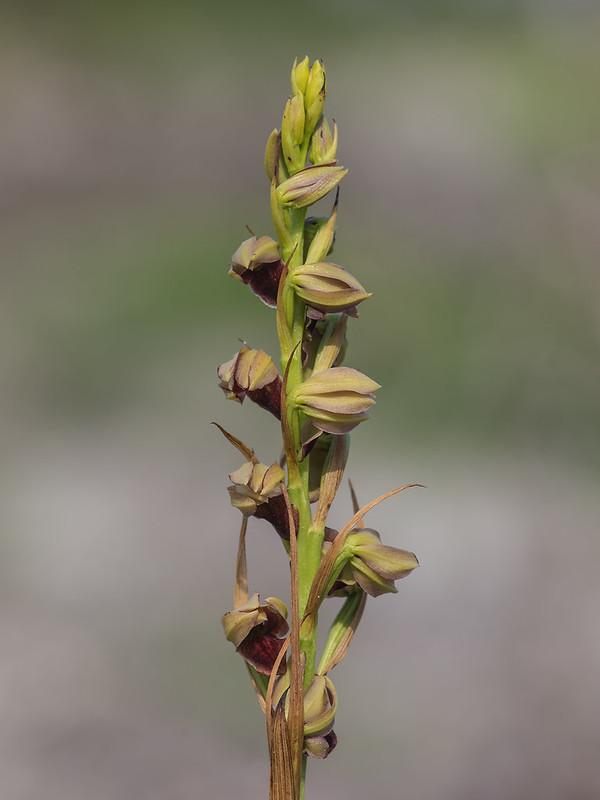 These orchid plants have one or two, 12-inch (30-cm), sword-shaped leaves and a flower spike that can be as much as 4 feet (120 cm) tall. All of the flowers are borne in a tight group on the apex of the stem: 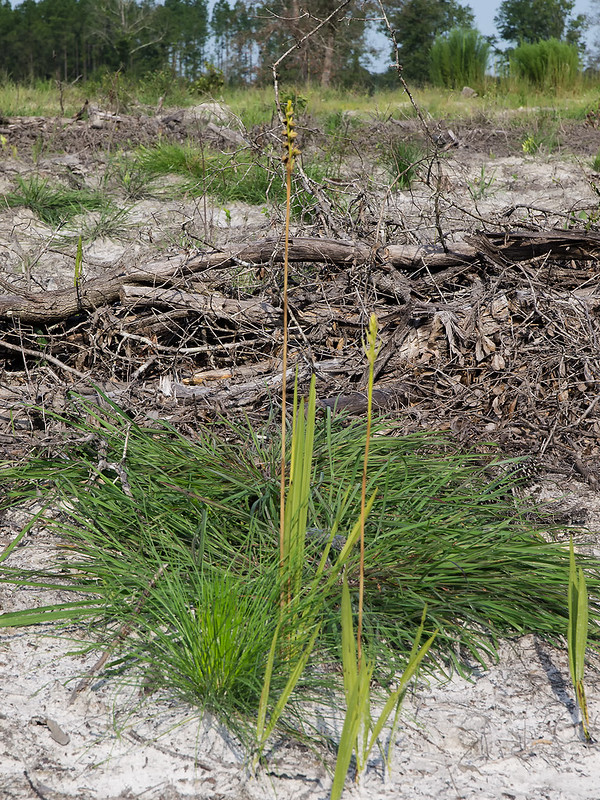 Here is a photo of Sam standing behind several blooming plants: 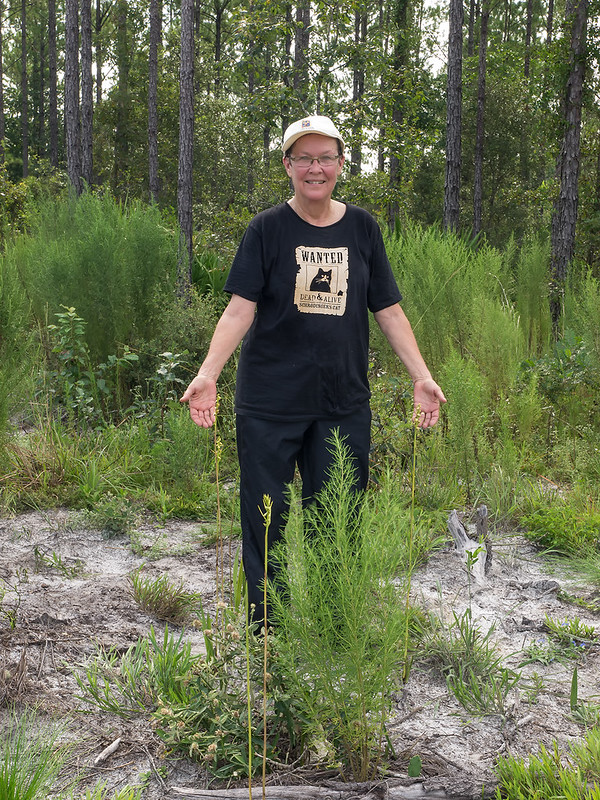 When we arrived at the site, the sun was already shining brightly, but the temperatures was tolerable. We searched the area and found that the best-looking plants were toward the lowest portion of the clear-cut field. We were thankful that this section of the field was partially covered by shade from nearby trees. Here is a shot of the overall habitat, formerly a pine plantation which was recently clear-cut and replanted in longleaf pine: 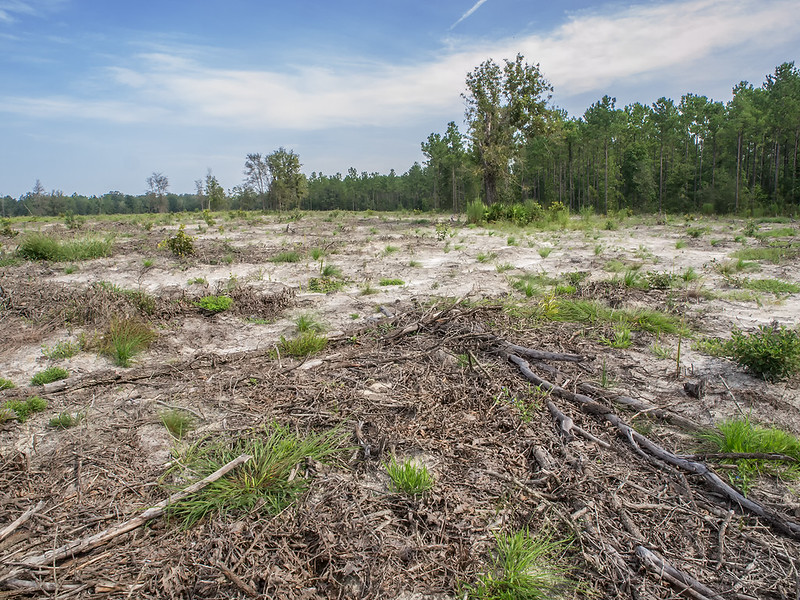 What you can see growing around the edge of the field and behind Sam in the previous image, is what the field looked like before the trees were cut.

I also found quite interesting the variety of different flowering states of the plants. The following series of images demonstrates the flowering stems from very tight spike to an inflorescence that is 4 or 5 days away from being in full bloom:

We even found a few plants that had obviously gotten a head start on blooming, and they were now producing seed capsules. It is my understanding that this is a self-pollinating species and thus requires no insect pollinator. That would explain the observation that every flower of this orchid species will
produce a seed capsule: 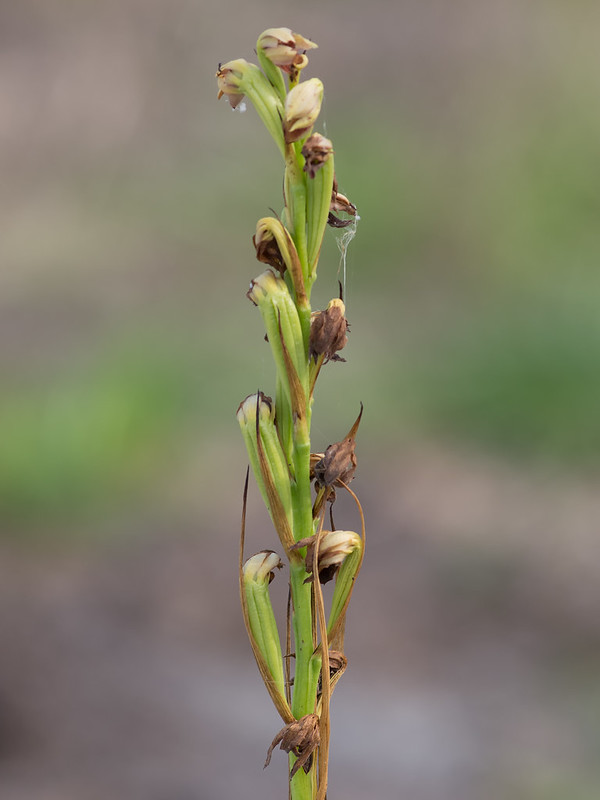 We spent a couple of hours studying and photographing many of the plants that we saw. Sam was happy to find them in bloom, and I was happy that she was happy, especially since she had traveled so far to see them. The following images represent some of the better flowers that we saw. Here, I must add that quite a few of the flower stems were brown and withered. I can only assume that the scorching heat in the open, sandy field was the culprit. I did not photograph any of the dried flowers: 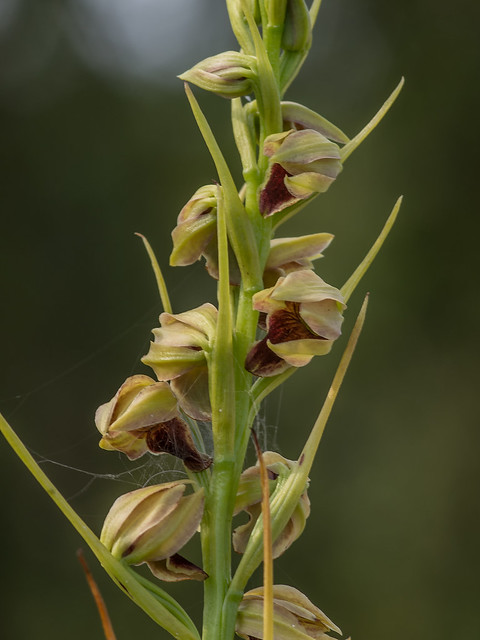 The day was warming up, and we had several other places to visit. So, we headed back through Folkston and then north on some of the back roads in Camden County.

The next site we would visit was one of the Platanthera chapmanii sites I had been shown when Matt and I were in the area two weeks previous. I knew the flowers would be past, but I wanted Sam to see the site so she could appreciate the habitat and what kind of management it takes to keep them blooming year after year. When we arrived, we saw several plants that still had a few decent flowers at the top of the inflorescence. I was heartened to see that almost every plant was producing seed capsules: 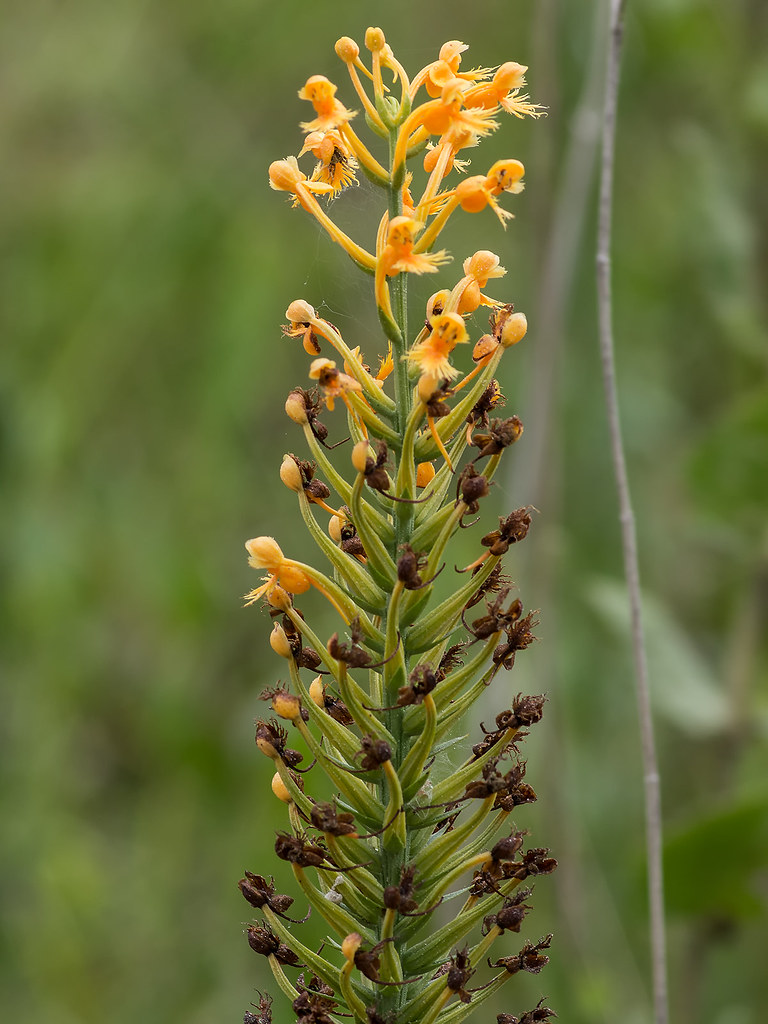 From the Platanthera chapmanii site, we continued our northerly direction to a premier location for Habenaria repens or Water-spider orchid. I had pointed out the roadside swampy site to Matt as we whizzed by it on our way to find more Platanthera chapmanii two weeks earlier. Fortunately, Sam brought along a pair of water shoes which allowed her to be able to get up close and personal with the orchids in the swampy water: 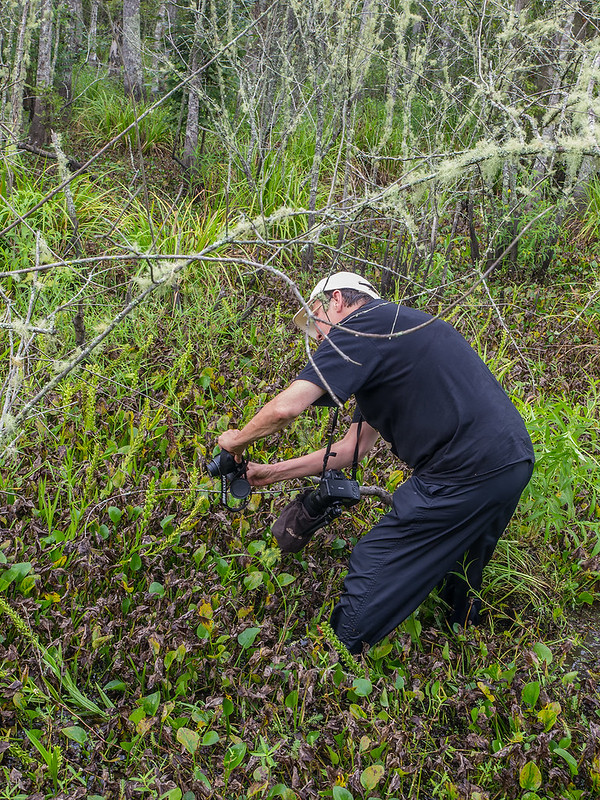 The weather was beginning to deteriorate in the late afternoon, and we heard nearby rumblings of thunder and lightning. So we had to pack up and head to the last site of the day. This is a sight for Platanthera conspicua or Southern White Fringed orchids. In my recent trip to the site with Matt, I had seen the beginning of the blooming of this species. Here is a shot of the roadside where the flowers are found:

Some of the few open flowers appeared to be slightly cream-colored and not the pure, bright white that I would expect for this species. The cream color would have to have come from a sister species, Platanthera ciliaris or Yellow Fringed orchid, but we found none of these in the immediate area. The hybrid between P. conspicua and P. ciliaris is called, Platanthera Xlueri. The color of these hybrid flowers would be expected to range from light yellow to a creamy off-white.

As we traversed the roadside site, we noticed the off-white color in many of the flowers. I believe these to be a back-cross of the original hybrid with Platanthera conspicua. Here is a side-by-side comparison of the creamy, off-white flowers with a typical Southern White Fringed orchid:

Here is a shot of another inflorescence that is not quite white enough to be a pure, Southern White Fringed orchid: 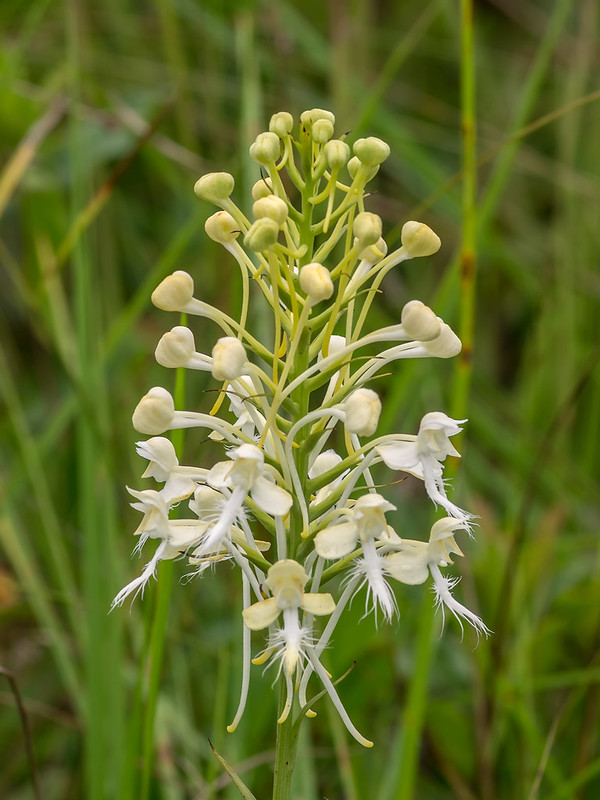 At this point, I’ll have to relate an event that occurred just before reaching the Southern White Fringed orchid site. If you have ever ridden with me on an orchid foray or if you have driven behind me on such a trip, you will know that I will slam on the brakes if I see something out of the corner of my eye that looks interesting. Well, that is exactly what happened. We were well on our way to the last orchid site when I saw some Lilium catesbaei or Pine lilies growing in the roadside ditch. This, in itself, is not so remarkable. In fact, the large majority of them were faded and past peak bloom. However, what I saw as I whizzed by the flowers was one that just didn’t look like it belonged. Here is an image of one of the typical, spotted, bright red-orange Pine lilies: 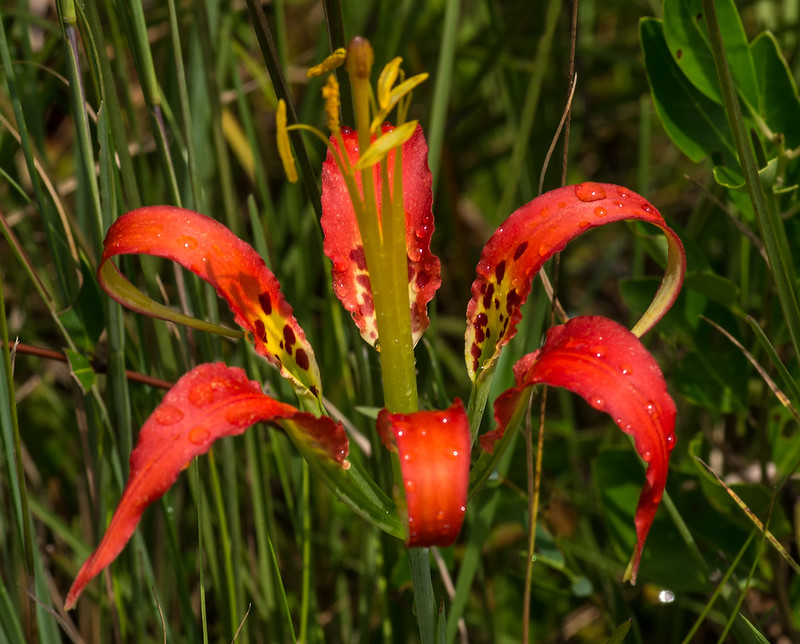 After we turned our vehicles around and arrived at the roadside flowers, what I saw gave me goose bumps. The Pine lily was bright yellow and had no spots! It had to be a very rare alba form of Lilium catesbaei!: 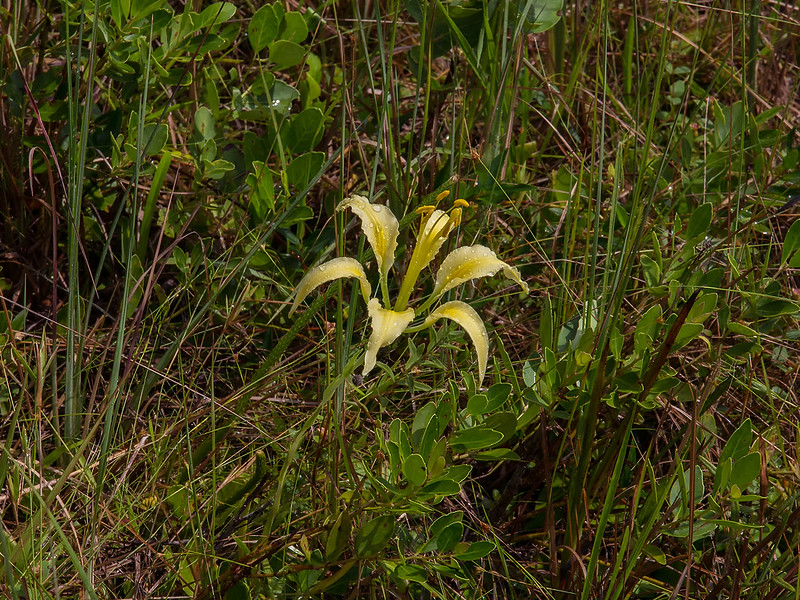 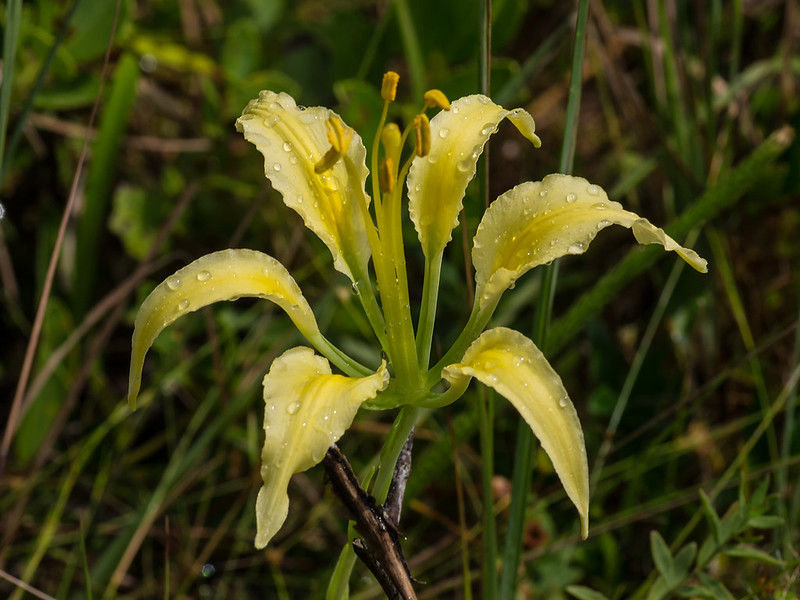 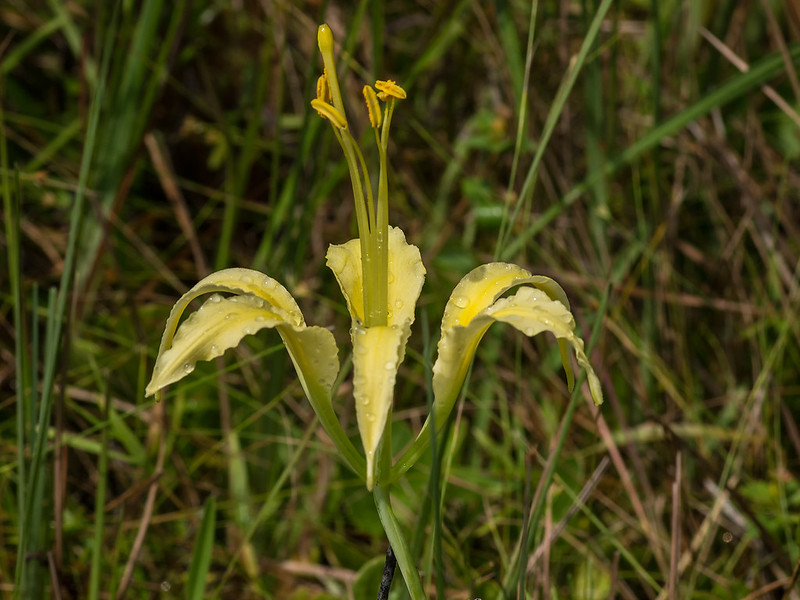 I cannot begin to tell you how fortunate I feel to have seen this beauty while driving in the back-country roads of southeast Georgia. I have attempted to find some references to this alba form, and I cannot come up with any. I’ve seen many hundreds of the typical form over the years and no alba form, so I know how rare it is.

What a day! Not only was I able to share a few special orchid locations with a good friend, I also found a very rare flowering plant. I guess my Karma was definitely in the groove.

After Sam and I parted, I decided to head north toward the South Carolina coastal plain to check on a few species of orchids which I thought would be blooming in the Francis Marion National Forest. I was looking specifically for the South Carolina version of Pteroglossaspis ecristata or Spiked Medusa orchid. Stay tuned…