One of the best botanizing spots in the upstate of South Carolina is a dirt road that connects state Hwy. 11 with U.S. Hwy. 276. It is known as Persimmon Ridge Road. This road cuts through two state Heritage Preserves: Ashmore HP and Eva Chandler HP. Both of those Heritage Preserves (among a dozen others) were set aside years ago so that rare plants and animals could be spared the fate of destruction from development. The winding, gravel road that goes up the mountain and across the escarpment is home to many of the plants that can be found in the Preserves.

One of these is the fairly frequent, Iris verna or Dwarf Iris. It’s only a few inches tall (hence the common name), and it sometimes forms large clumps of a dozen or more flowers. On this trip, I discovered that I was about four or five days late to catch them at their peak, so a photograph of a large stand of them was just not going to happen. Several inches of rain in the past few days didn’t help matters much either, since it beat up most of the flowers and even knocked off petals from a few. What I did manage to do, however, was find a couple of single plants that somehow had been sheltered or that had just opened their petals that morning: 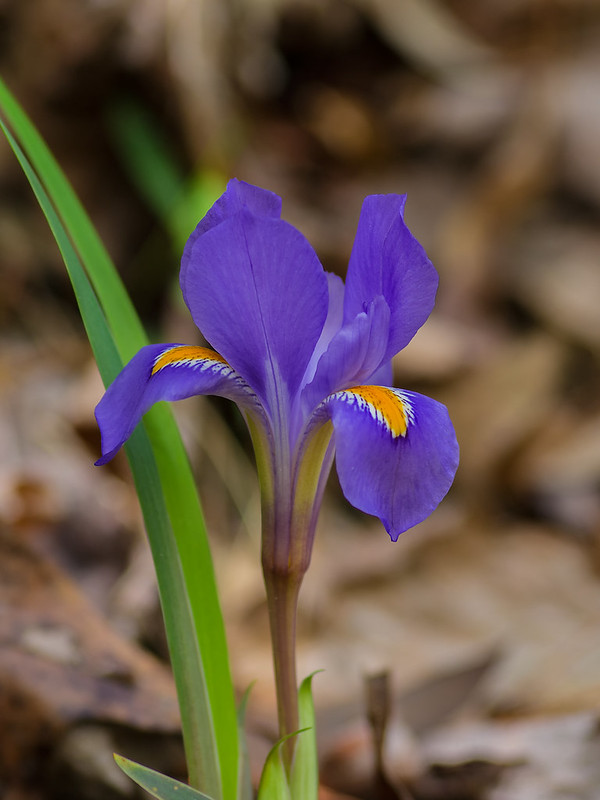 I believe that the flower in the following image opened its petals just a few hours before I snapped the photograph: 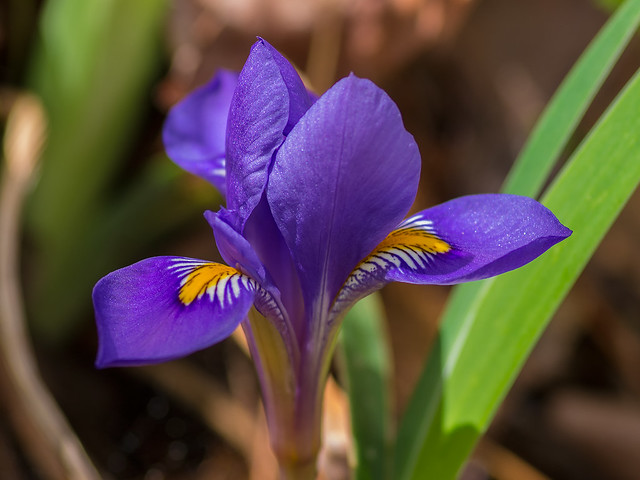 Another flowering plant that was conspicuously present is Potentilla simplex or Cinquefoil. The common name (cinq => five and feuille=> leaf in French) comes from the five lobes found on each leaf. French or not, it covered the ground at many locations: 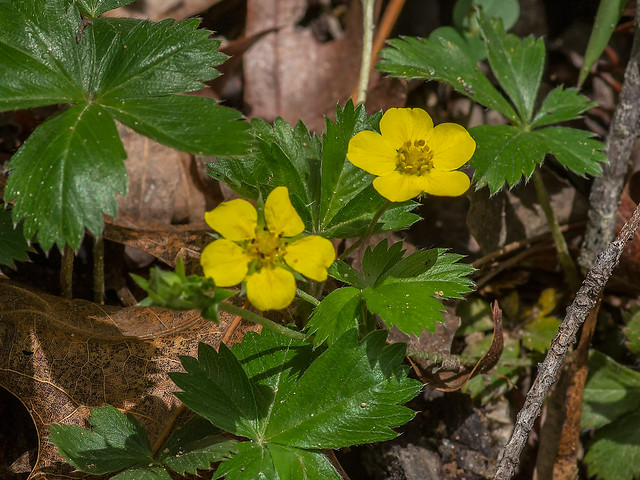 As my truck gained elevation, I began to notice little blue violets beside the road. These are Viola pedata or Bird’s-foot Violets. These flowers are normally a medium-blue or light-purple color, but I actually found a few that were decidedly lighter in color — almost white:

From time to time, I’d find a flower that was not a uniform color such as the one in the following image: 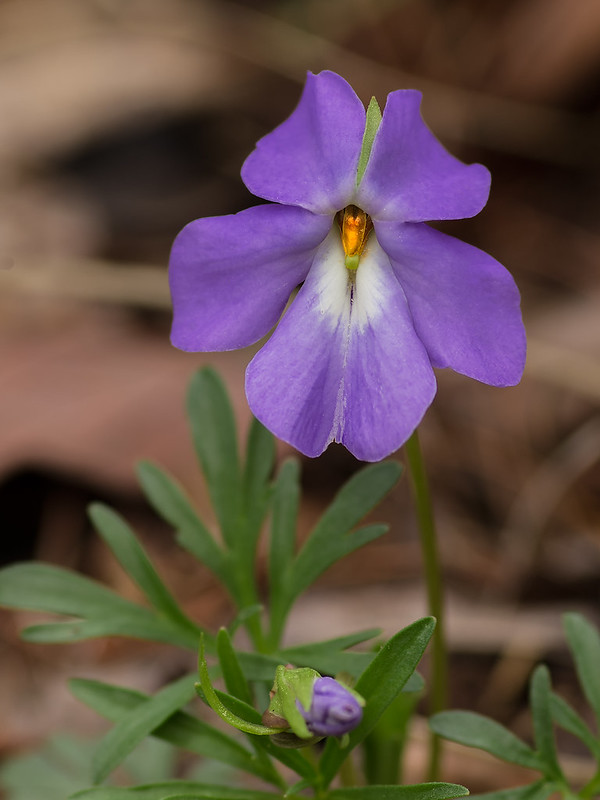 This violet species has a tendency to clump, so it was not unusual to see eight to ten flowers in a single clump: 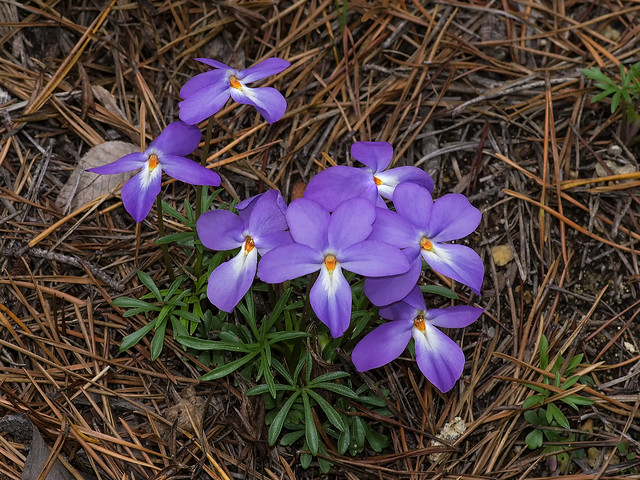 Here is another nice clump of plants having reddish-purple flowers: 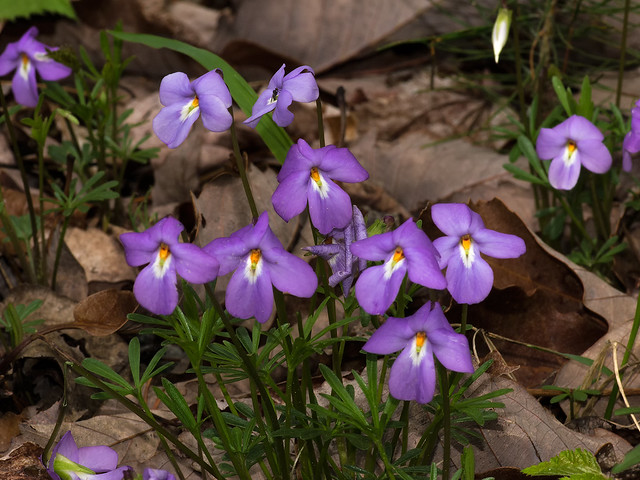 The leaf in this species of violet is divided into pedate lobes. Here is a close-up of the very deeply divided leaves of one of the lighter colored Bird’s-foot Violets: 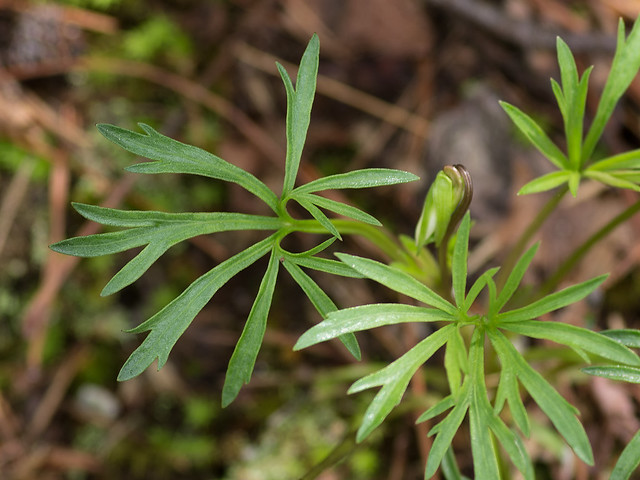 The road briefly took a slight dip as it crossed a small creek. Lining the banks of the creek were several large shrubs covered with pink flowers. These were the flowers of one of our native azaleas called Rhododendron periclymenoides or Pinxter Azalea. This species is synonymous with Rhododendron nudiflorum. In these woods, the plants can reach height of 12-15 feet (3.5-4 meters) and may be covered with many hundreds of flowers. The flowers are held in clusters at the end of spindly stems, and they sway back in forth even in the most gentle breeze:

After looking around a bit, I found one plant whose flowers had deep red corolla tubes: 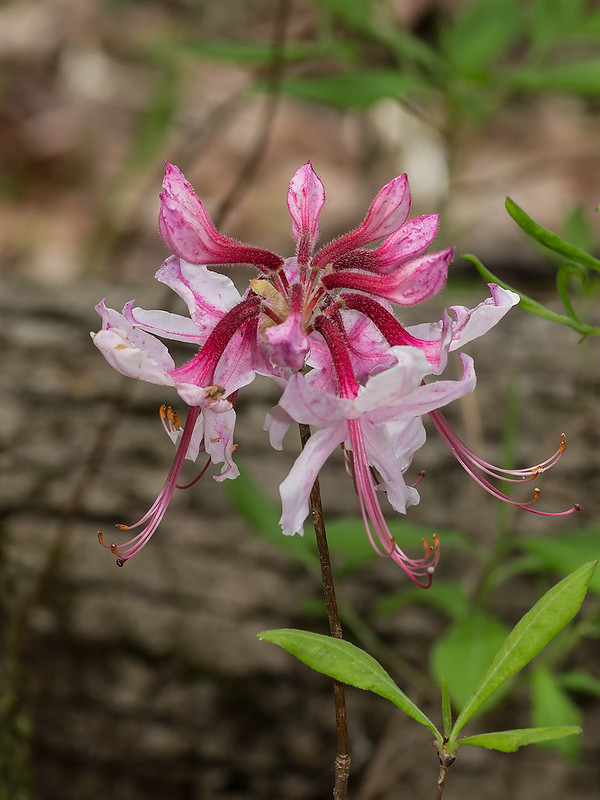 Enough of looking up — it is time to look down again to see what beauties are growing at our feet.

The first plant I spotted is Erythronium umbilicatum or Dimpled Trout Lily. I featured this species in one of my prior blog entries. Since it was one of the first flowers to bloom in the calendar year (late February to early March), it was now forming seeds. Here are the “before” and “after” below. Notice that the swollen seed capsule is resting on the ground, not pointing upward. That characteristic is definitive for this species to differentiate it from its close relative, Erythronium americanum.

The word “dimpled” describes the end of the seed capsule which is depressed into a dimple rather than being pointed.

Near the fruiting Dimpled Trout Lilies were two species of violets: The yellow-flowered Viola hastata or Halberd-leaf Violet and the tiny white flowers of Viola blanda or Sweet White Violet: 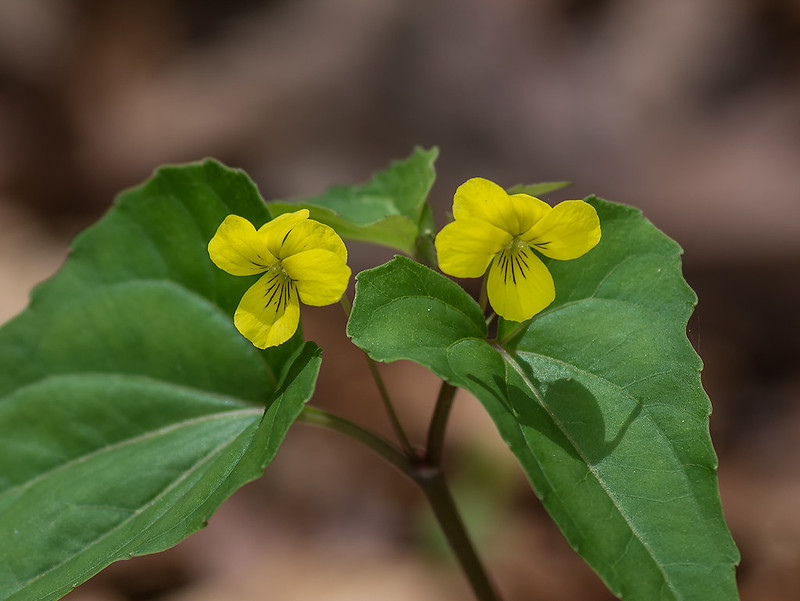 I think Viola blanda is quickly becoming one of my favorite spring wildflowers. Even though the entire plant is just a few inches tall, the tiny white flowers are so perfect that it’s difficult not to like them: 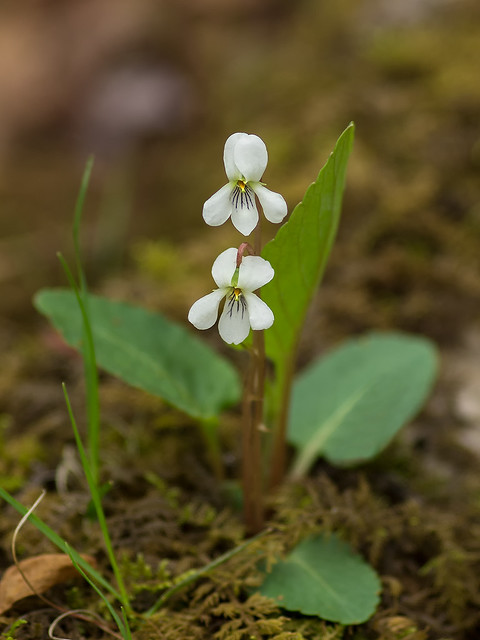 Also near the stream, are clumps of Hexastylis heterophylla or Variable-leaf Heartleaf. The glossy, evergreen leaves of this plant can be uniformly green or its veins highlighted with yellow or light green. Here is an image of one of the plants I saw on this trip: 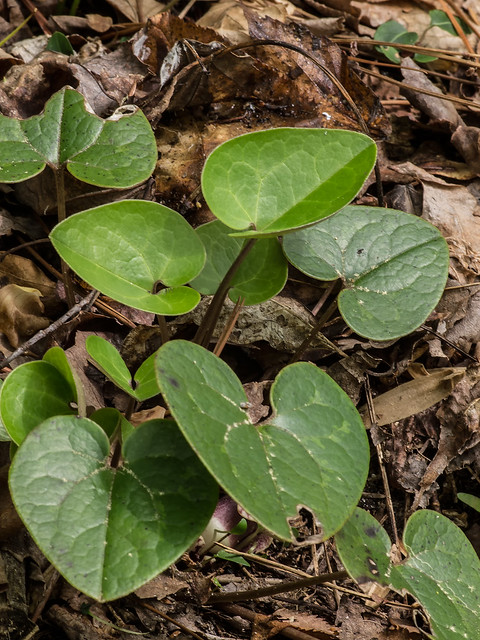 But what I find most interesting about this plant is its otherworldly flowers. They are held low to the ground, beneath the leaf litter so that beetles and other small insects might more easily get to them in order to pollinate and spread the seeds. In order to see the flowers, you must first gently remove the leaf litter from around the base of the plant. Exposing one of these unusual flowers for the first time is quite the treat: 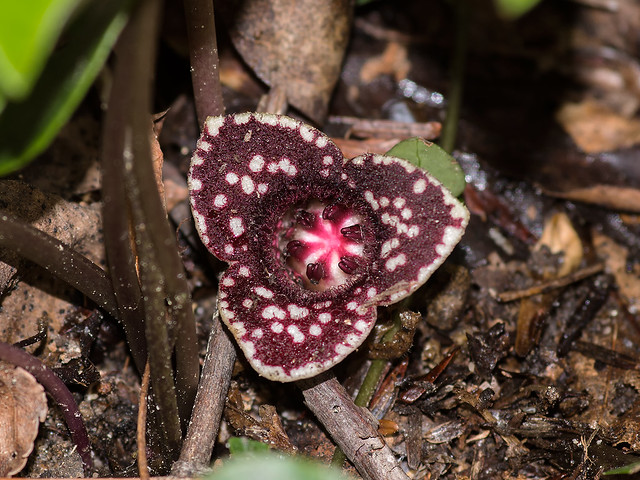 As I am navigating the forest understory near the creek, I continually trip over a fairly common plant known as Leucothoe fontanesiana or Mountain Doghobble. Appropriately named, this plant acts as effective hobble for any animal attempting to move from place to place where it is growing. But the drupes of flowers are quite lovely, so I decided to photograph it: 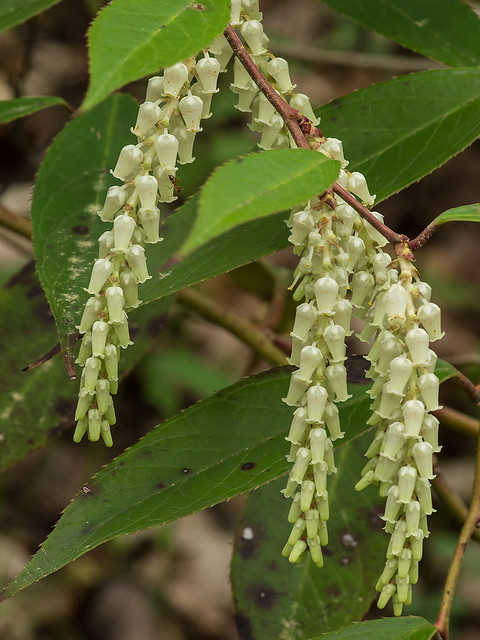 I catch a splash of blue out of the corner of my eye, and it turns out to be another Iris species: Iris cristata or Dwarf Crested Iris. In our area, Dwarf Crested Iris usually blooms later than Dwarf Iris, so I was a bit surprised to find them both in bloom on this trip. Here are some shots of the plants which were growing at the base of a moss-covered tree stump:

Call me peculiar or whatever, but I really like the shape and coloration of Iris buds. I think they are almost as pretty as the open flowers… The flower color is quite variable, so I was not surprised to find a lighter colored one: 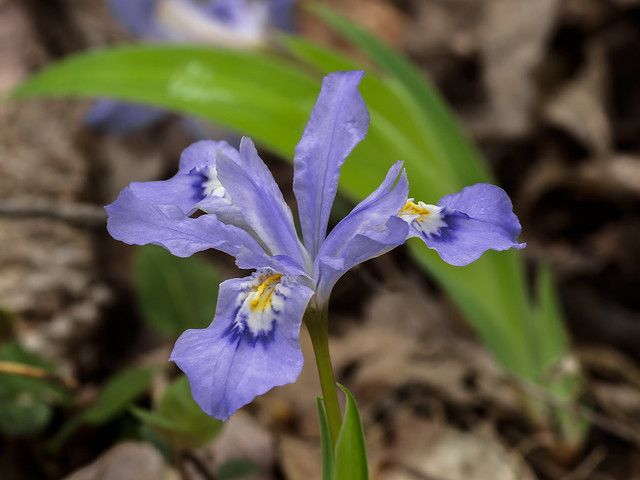 I have seen images of the alba form of this species, and it is a beauty. But, so far, it has eluded me.

A bit farther up the road, I see a large population of a daisy-like plant that blooms for several months in springtime. It is called Erigeron pulchellus or Robin’s Plantain. I’ve seen it in begin to bloom in mid- to late February, and I’ve seen it still making flowers in early May. Sometimes, the edges of the petals are tinted with pink or purple, but these were all white: 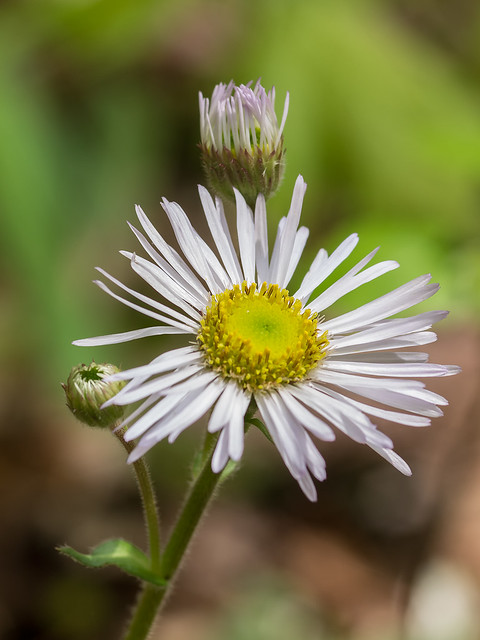 Now, for those who (by seeing the blog tag line) expected to see orchids, here is a tease. My good friend Kelvin Taylor has already photographed Cypripedium acaule or Pink Lady’s-slipper orchid in bloom in the Piedmont of North Carolina. So, not to be outdone, I wanted to see if our populations of that orchid species were in bloom. What I found was encouraging, in that perhaps one week is all it will take to see ours in their perfect pink splendor.

It is my experience to see that the emerging flowers of the Pink Lady’s-slipper orchid begin showing as if they are going to be the alba form with white pouches or slippers. But over time, as the flowers mature, they will gradually gain the magenta-pink color that gives them their name. Here are a few shots of the flowers just off of Persimmon Ridge Road as I saw them on Saturday , April 18:

If you look closely at the pouch or slipper of the flower on the right-most image, you can see just the hint of pink beginning to show. Here is a lovely pair that I can hardly wait to photograph in full bloom: 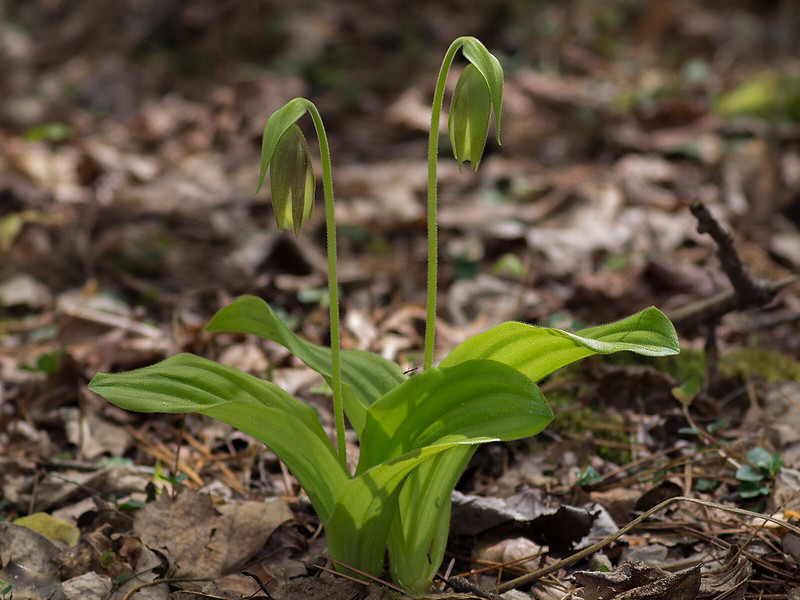 Just so you know how beautiful this place is, I photographed a panoramic shot from an overlook at one of the Heritage Preserves near Persimmon Ridge Road:

Since my blog format does not allow a larger view of this scene, click here to see a full-screen image.

If you look at the enlarged image toward the center left of the horizon, you can see a few of the taller buildings of my home town, Greenville, South Carolina. It’s only 40 miles (~65 km) from my house in Greenville to this spot, but it is in reality a world away…