Just got back from a successful botanical trip to the Pisgah National Forest in Transylvania County near Brevard, North Carolina. That is the location for a large population of Triphora trianthophora or Three-birds orchid. They begin to bloom about this time of year, and I wanted to check on their progress. When I got to the site, I noticed how dry it was up there. The open woods where these orchids are found is usually quite damp, but on this day, the leaves crackled under my feet. When I found the plants, many were shriveled, and the flower buds were quite small and wilted-looking. In addition, many of the plants looked as if they had been attacked by insects — not a good sign for this year’s bloom. I wonder if the die-off of the native Tsuga canadensis or Eastern Hemlock could be part of the problem? In this section of the Pisgah National Forest, the die-off, caused by Adelges tsugae or Hemlock Wooly Adelgid, has affected more than 95% of the standing Eastern Hemlock, a tree that is an indicator of the health of the forest, leaving only towering dead snags. Since the die-off began several years ago, more light has been allowed to filter in through the forest canopy, causing the ground to heat and lose precious water. I can only hope that this lack of water is a temporary situation in this orchid location, because it is one of my favorite places to visit during bloom season.

That said, this time of year is also the bloom season for two other orchid species at the same location: Goodyera pubescens or Downy Rattlesnake Plantain orchid and Tipularia discolor or Crane-fly orchid. Neither of these was in as great abundance as they were last year, but I did manage to fine a few good specimens to photograph: 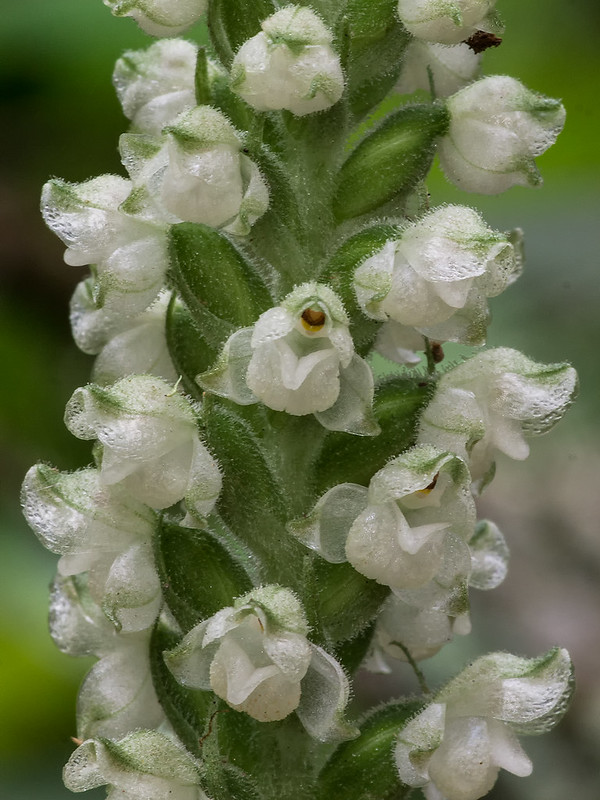 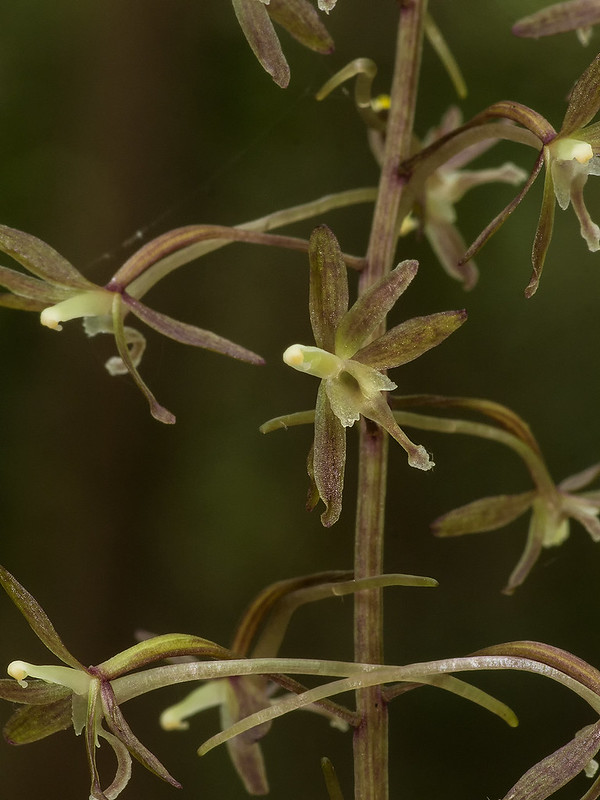 The Downy Rattlesnake Plantain orchid is an easy one to photograph, because all of the flowers are close to the stem, and there are not a lot of out-of-focus flowers in any particular image. Here are a few images of the same plant taken at different distances from the plant: 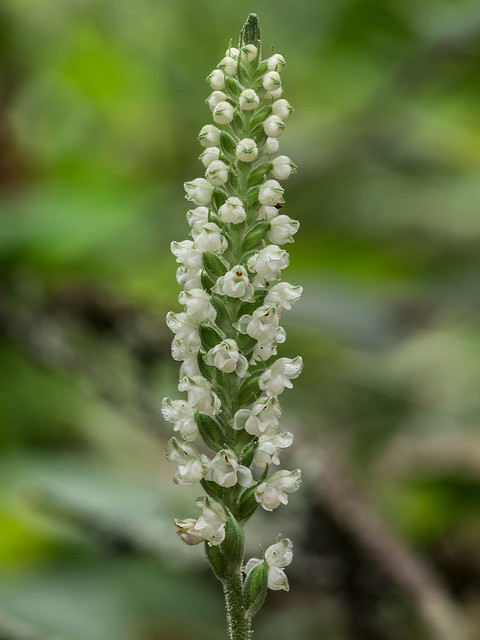 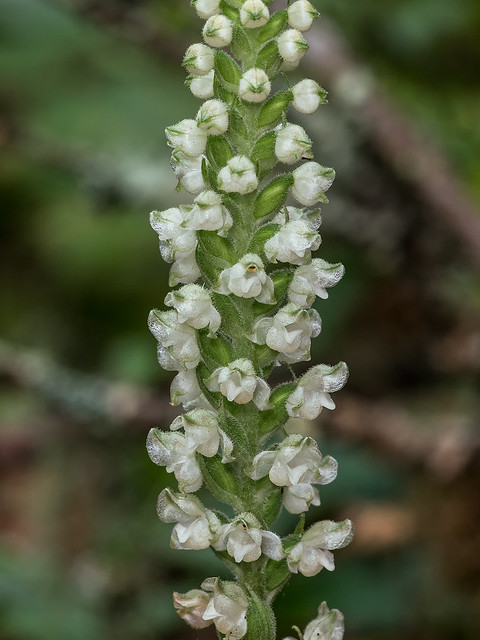 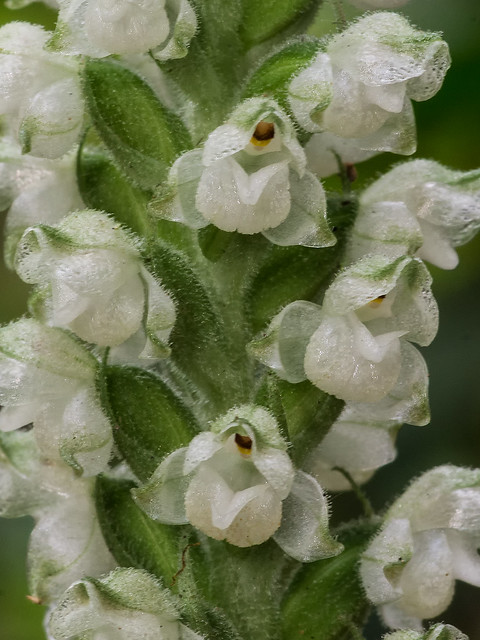 The other orchid at this site is the Crane-fly orchid. It has a strange-looking flower that is always tilted at an angle — not always in the same direction. In addition, its petals and sepals are not arranged in a symmetrical pattern as is found with the large majority of other native orchids. Here is a shot of a single flower that shows these characteristics quite well: 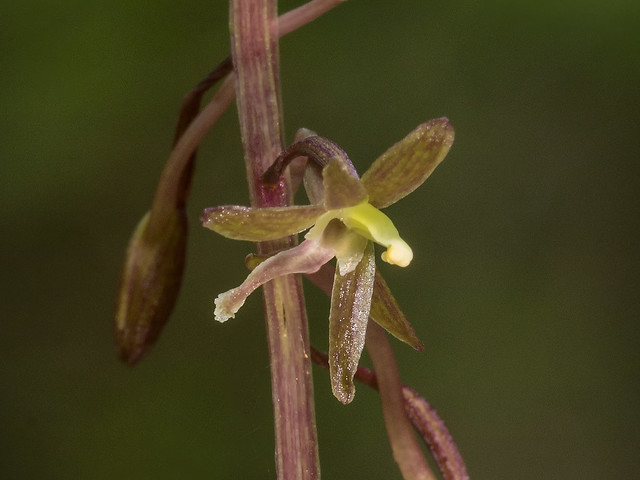 I understand that it got its common name because of its resemblance to a crane fly — an non-stinging insect that resembles a very large mosquito. This insect is in the genus, Tipula, hence the genus name for the orchid, Tiuplaria.

The single leaf of Tipularia discolor is absent when the plant blooms. Here and here are links to my discussion of two of our local native orchids which have winter leaves. Both Goodyera pubescens and Tipularia discolor have winter leaves, although those of Goodyera pubescens are “evergreen” and last several years. The leaf of the Crane-fly orchid shows itself in October or November after the leaves in the forest canopy have fallen. It waits this late, because with no leaf cover in the woods, it can receive light throughout the entire winter (assuming that there is no heavy snow cover). In mid-summer, the leaf dies back, and the plant send up its bloom stalk containing up to 60-70 flowers.

Here are a few additional images of the Crane-fly orchid:

In the images above, you can easily see the nectary spur where the nectar reward is stored. It is accessed, by the pollinator, through the nectary opening in the front center of the flower. It is said to be pollinated by night-flying moths, but on this day, I witnessed a Bombus (bumble bee) species visiting many of the flowers on several blooming stems. Although the bumble bee could be a viable pollinator by moving pollinia from flower to flower, there is no possible way it could access the nectar because its proboscis is not nearly long enough to fit down the nectary tube. Any of a number of moths or butterflies could, however, access the nectar. Just why the bumble bee was so interested in the flowers puzzles me, since there is no noticeable fragrance during the day — only at night when the night-flying moths are active. Perhaps one of our knowledgeable readers has the answer…

While photographing the Crane-fly orchid’s flowers, I noticed some misplaced pollinaria on the petals and sepals of several of the flowers. These pollinaria are quite tiny, but I manage to capture a few of them. In the images, the bright white cap that protects the pollinia while it is still connected to the flower is still present. But, the paired, yellow pollinia are quite evident in the images: 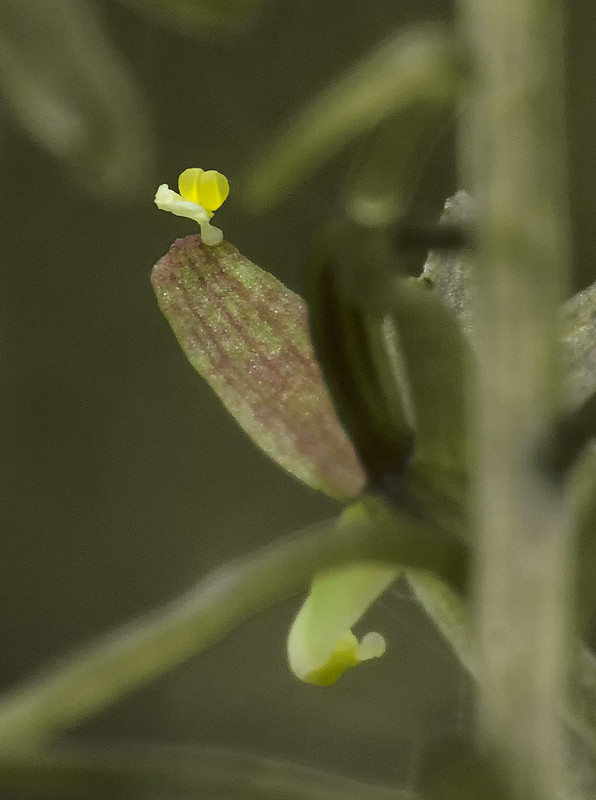 In this last image, note that the flower’s light green column still contains its pollinaria, evident by the whitish “sticky pad” that can be seen pointing out from the tip of the column, which is pointing downward. This sticky pad is very, very sticky, and it connects to a body part (perhaps the back of the thorax) of the pollinator when it makes its visit to the flower. In this way, it can be carried from flower to flower, thus making it possible for the pollinator to fertilize several flowers in its nightly foraging for nectar.

After finishing the photography of the two orchid species at this site, I got back into my truck and headed farther into the National Forest to a location where I had photographed two other orchid species: Platanthera ciliaris or Yellow Fringed orchid and Spiranthes lacera var. gracilis or Southern Slender Ladies’-tresses orchid. They are sympatric at this location, meaning the two species exist in the same geographic area and thus regularly encounter one another. This is good because it allows me to capture images of two orchid species with less travel time.

Once I arrived at the site, I noticed right off that the Yellow Fringed orchid flowers had just begun to open and only on a couple of plants. However, I was able to get a couple of images of these strangely beautiful flowers:

Note the extremely long “fringe” on the lips of these two flowers. The plants at this specific location tend to produce flowers with this long fringe — much longer than is seen on plants just a mile or so away. It will be another week or so before the flowers on the other plants at this site are open. I hope to make a return visit.

The other orchid species at this site is the Southern Slender Ladies’-tresses orchid. This species was well into flower at this site. It has extremely small flowers — about 1/8th of an inch (~3 mm) long. The tiny lip has a dark green blotch in the center of the lip. The flowers coil around the very thin stem, opening from bottom to top. Here are some shots of a couple of the eight blooming plants I found on this visit: 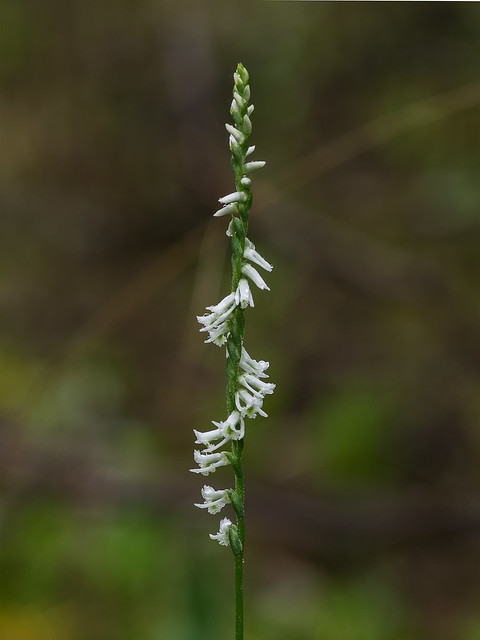 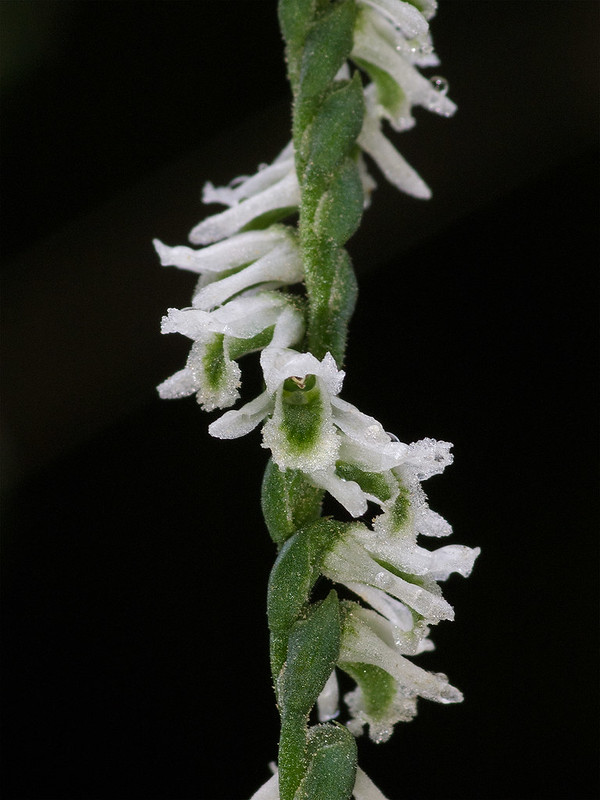 Of course, I did see other flowering plants besides the orchids. On the way up the last orchid site, I passed several vines of the ground-hugging Ipomoea pandurata or Man-Root also known as Wild Sweet Potato. It is a member of the Morning Glory family, but its flowers are quite large, measuring about 3 inches (7.5 cm) across. As with many other native plants, they have some medicinal properties. When left uncooked, the roots have a strong laxative effect. 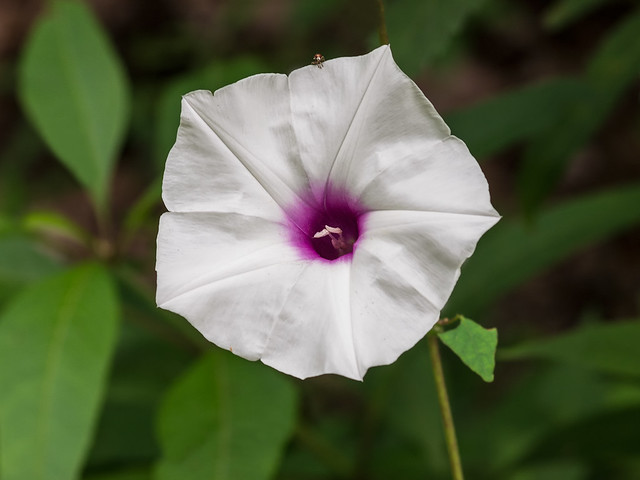 A plant that I have seen from time to time but have never photographed is Apios americana or American Groundnut. Keeping with the thought of multiple uses of our native plants, this one has tubers that are highly palatable with culinary characteristics of a potato, although the flavor can be somewhat nuttier than a potato and the texture can be finer. Studies in rats suggest that raw tubers should not be consumed because they contain protease inhibitors, whereas cooking destroys the protease inhibitors rendering the tubers safe to eat. I’ve never tried them, but I do know that the flowers are quite lovely: 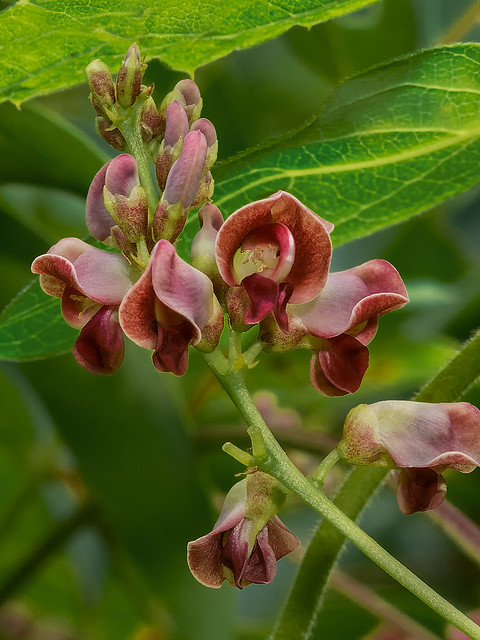 As I made my way back down the mountain, I noticed a beautiful bright-pink flower which grows along the shoulder of the gravel road. I recognize it as Sabatia angularis or Rosepink. The flowers are not only lovely, but they have a nicely sweet fragrance. One of the many Sabatia species we have in the Southeast, this one has a bright yellow star design in the center of the flower. The plant is about 15 inches (38 cm) tall, displaying numerous pink flowers: 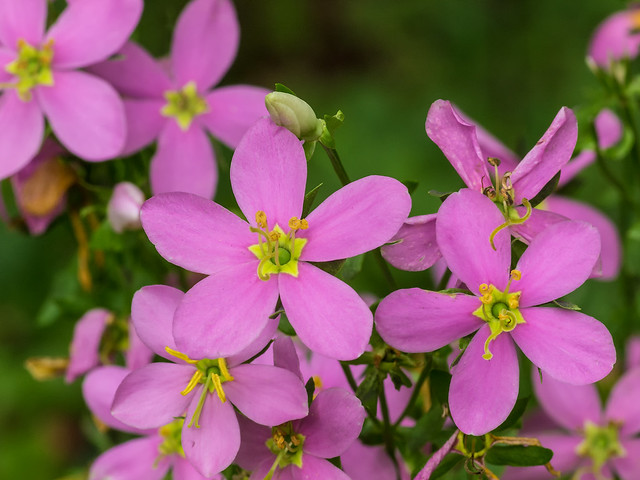 Even farther on down the mountain, I passed a wet area that had a number of Lobeila cardinalis or Cardinal Flowers in full bloom. What a sight to see, these 4-foot tall (1.2 meter) plants with some of the reddest flowers possible clustered at the end of the flower stem!

Although I didn’t see any hummingbirds this day, surely these flower must attract their share of this flitting creature. 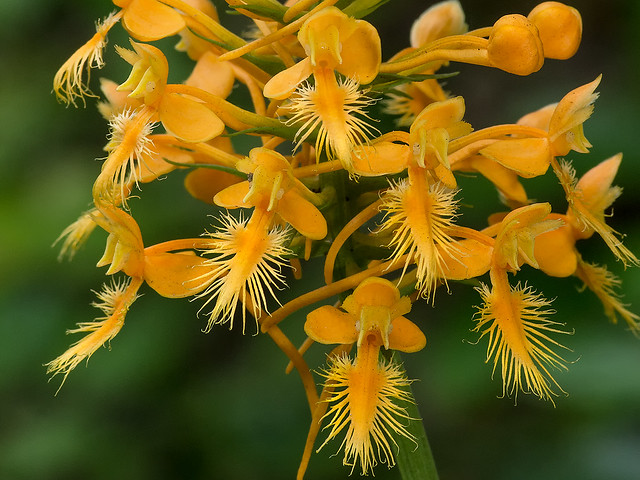 Well, this brings to close another successful day trip to a place that seems to draw me back season after season. The proliferation of orchids and other beautiful wildflowers is something I’ve grown to expect in this section of the Southern Appalachian Mountains. It is a hotspot of botanical diversity, and I’m overjoyed to live so close by…