Today began very cloudy — great for wildlife/wildflower photographers. Actually, the trip was scheduled to be the day prior, but rain was predicted all day, so we postponed it. I would be meeting my new friends, Jeremy Bullinger and his 6-year-old daughter, Katie, and heading to a couple of upstate South Carolina’s premier spring wildflower sites: Devil’s Fork State Park and Station Cove Falls, both in Oconee County.

At Devil’s Fork State Park, we hoped to find Shortia galacifolia or Oconee Bells and Monotropsis odorata or Pygmy Pipes, also known as Sweet Pinesap. Although locally abundant, Shortia galacifolia is listed as a federal species of concern, which means that it may be listed as threatened or endangered in the future. Monotropsis odorata is not listed, but it is seldom seen because of its preference for growing under forest leaf litter. More about this later…

Here is an image of the beautiful, Oconee Bells — the first flower of the day for us: 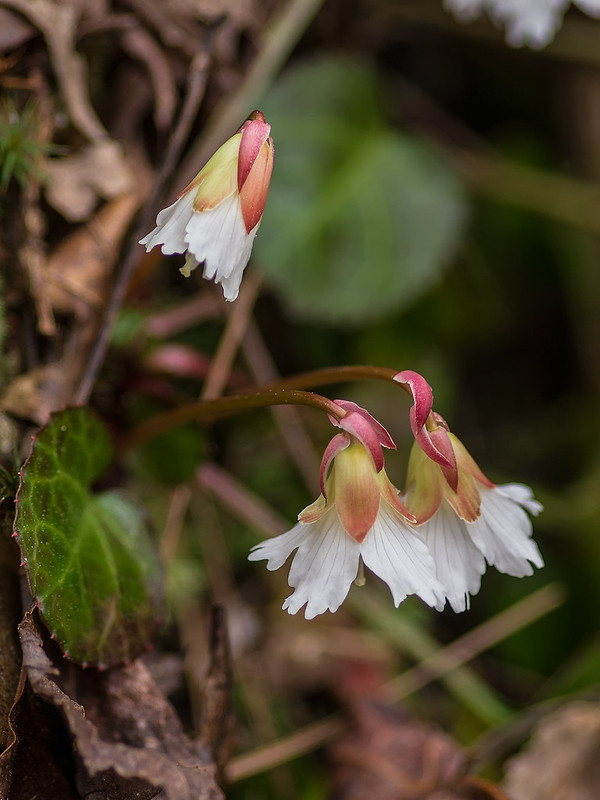 The discovery of Oconee Bells has a strange history, which I talked about at length in a previous blog entry. Today, we found many of them in bloom, but we were almost too late for peak bloom. I generally associate March 15 with peak bloom for these wildflowers, but the vagaries of the weather often plays a huge part in the scheduling of a field trip to the area. The past couple of years has seen a decrease in the number of flowers available at peak bloom, and this year was no exception. I’m sure the weather plays a part in this, but I’m not sure what the details are. We had a very mild fall and winter this year and last year — perhaps it takes colder weather to facilitate setting buds in the plants.

In any case, here are some more shots of this beautiful and unusual wildflower: 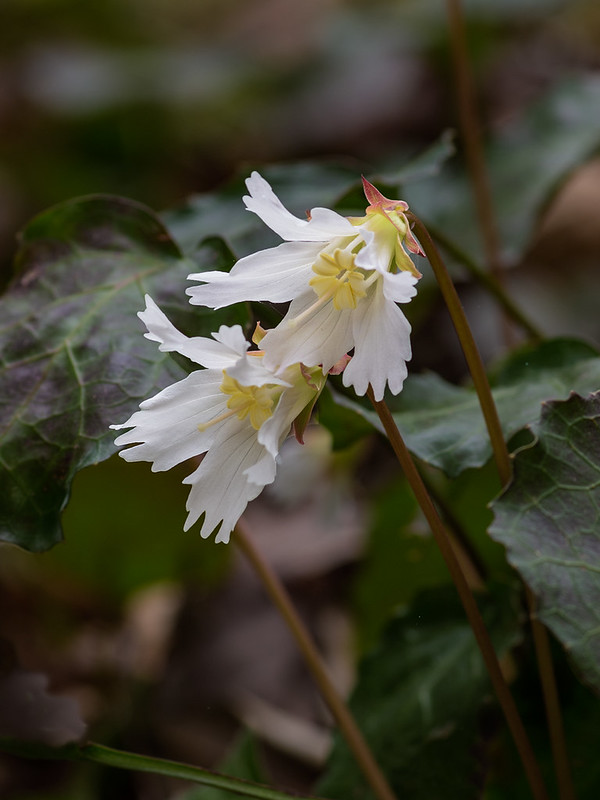 The plants only grow up to 15 feet (4.6 meters) from a small stream that meanders through the hills in the area. What I’ve noticed over the years, is that the flowers generally seem to point toward the stream, regardless of which side of the stream they are found. In order to get a photograph of the front of the flower, you generally have to be either standing in the stream or using a long lens to shoot across the stream. But I find shooting the flowers from behind results in some pleasing shots, for me, anyway: 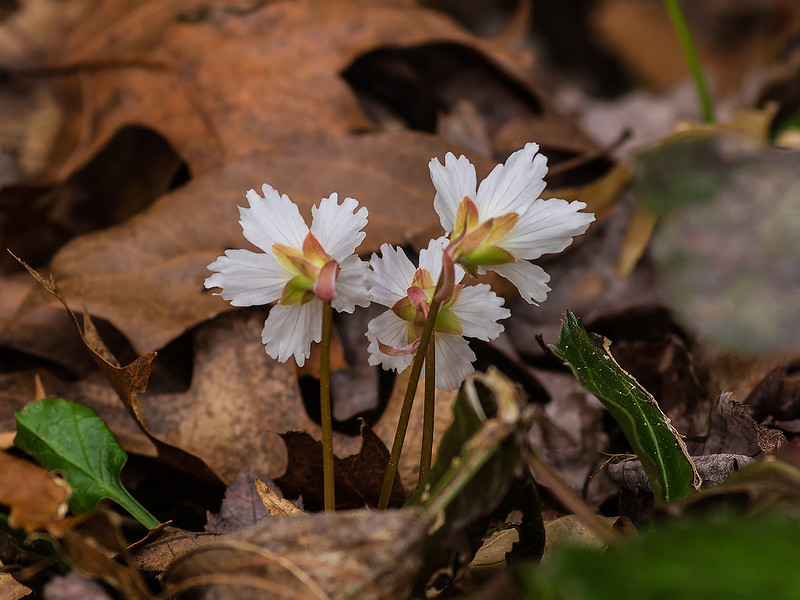 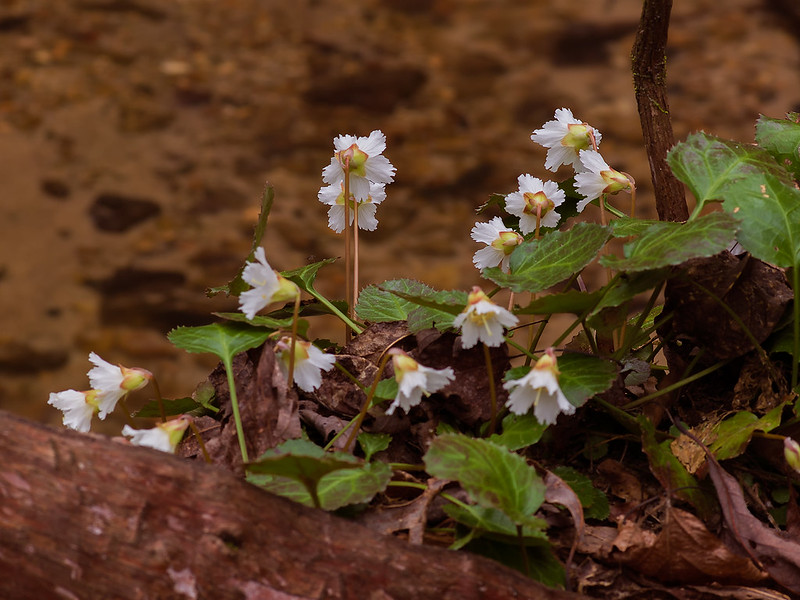 Once we finished shooting the Oconee Bells, it was time to attempt to locate the reclusive, Monotropsis odorata or Pygmy Pipes. We hiked to my favorite spot for these beauties, but it seems that this wildflower species is also dwindling in the area. We found only a few, meager plants. They were hardly worth photographing. Disappointed, we decided to call it a day at Devil’s Fork, and we turned around to hike back to the truck. However, on the way back, both Jeremy and I stopped in the trail when we smelled the unmistakable spicy fragrance of Pygmy Pipes. I had notice the fragrance in previous years along this part of the trail, but I had never had success locating the plants. This time, I was determined to find some good specimens for Jeremy to photograph.

So, I ventured into the area where I figured the plants would be growing; got down on my hands and knees and began to slowly proceed forward, lightly brushing away the thick leaf litter and hoping to expose the plants. It is nearly impossible to find the plants except by studying where the fragrance is originating. Stopping every now and then to see which way the gentle breeze is blowing, turning into that direction, and then brushing away the leaves is the only, sure-fire way of locating the plants.

Soon, I managed to find a number of groups of blooming Pygmy Pipes on the steep hillside near the stream. I yelled at Jeremy and Katie to come over to where I had found the plants so that they could see them. We were all excite to find some nice specimens — Jeremy and Katie both set up to get some good photographs. Here is what we found: 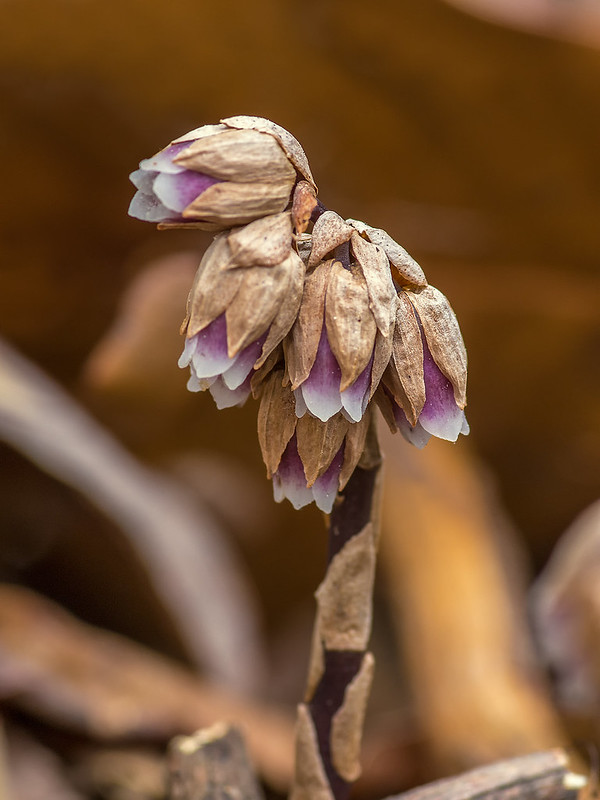 As you can see, they come in a couple of color forms; the grape-purple one (see above right) is less common at this site, but it is my favorite.

It was time to head off to our next stop, but I just had to take a photograph of Jeremy and Katie on the hillside where I found the Pygmy Pipes: 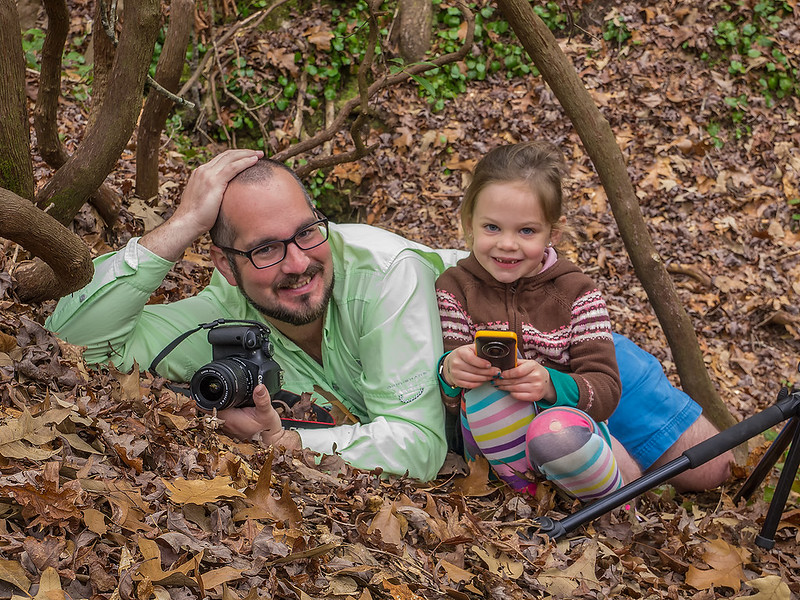 We finished the hike back to the truck and loaded our gear for the trip up the road to Station Cove Falls — the basic cove forest where dozens of spring ephemerals awaited us. As we neared the location, sprinkles of rain splattered on the windshield. I was fearing that we would not be able to finish the trip before the darkening clouds opened up on us. I pulled off onto the shoulder of the road and checked my Weather Channel radar map. Luckily, I was still with range of a cellphone tower, and saw that the major portion of the rain was still fairly far away. So, we decided to continue on our trip.

When we arrived at the trail head for Station Cove Falls, there were a number of cars parked in the dirt parking lot and along the side of the road. As I mentioned previously, this is a well-known hot spot for spring wildflowers, and this time of year brings out all of the photographers and sight-seers in the area. We gathered our camera gear, ate some of the chocolate chip cookies that Katie had packed, and headed off down the trail to the falls.

Jeremy is relatively new to wildflower photography and has not seen all of the wildflower species the area has to offer. So I tried to prepare him for the sight of tens of thousands (maybe even hundreds of thousands) of Trillium cuneatum or Little Sweet Betsy that we would be seeing farther down the trail. He was excited when the first ones began to appear along the trail, but I told him that there would be many, many more just ahead.

As we reached the spot where the Trillium were thick and covering the ground, he couldn’t wait any longer. So Jeremy, Katie, and I found the best and prettiest ones to photograph and took out our camera gear to record images of these beauties. I pointed out some of the color variations to Jeremy and he was able to see many of the varied forms of Trillium cuneatum at the site. Here are six different color forms that I found, the dark maroon being the most common, by far:

Even though there are many thousands of Trillium cuneatum at this location, there are numerous other beautiful wildflower species there, as well. Near the spot where we photographed the color forms of the Trillium, Jeremy found the “mother lode” of a tiny wildflower that I had been looking for on this trip. It is Obolaria virginica or Virginia Pennywort. The plants are only a 2-3 inches (5-7.5 cm) tall, and are not easy to spot in the leaves near the trail, but Jeremy has a good eye for detail and found them with no problem. The curious, greenish-purple foliage and bright white flowers make this one species that I’m always happy to photograph: 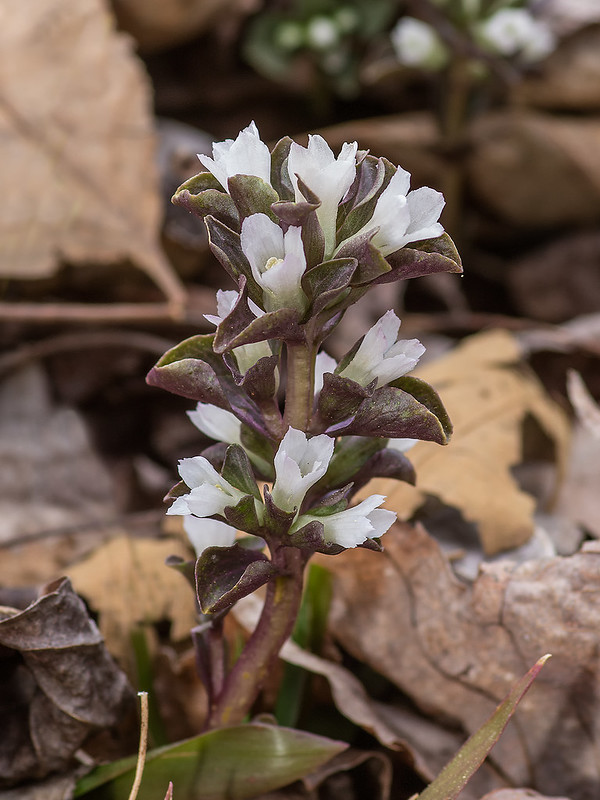 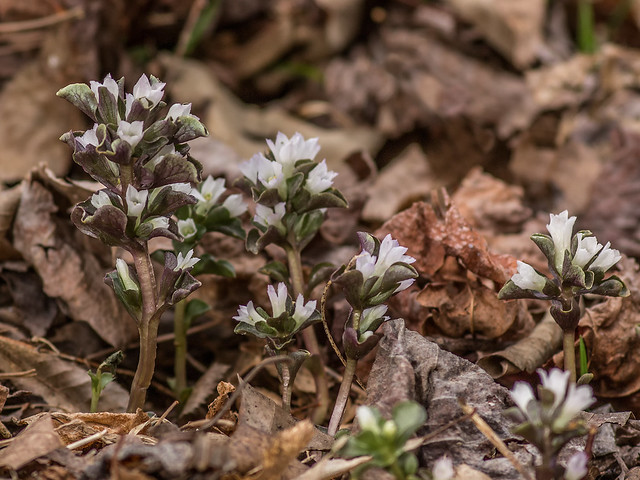 There were several other wildflower species nearby, and we wasted no time in capturing their beauty. These are Chrysogonum virginianum, aptly called Green and Gold, and the daisy-like Erigeron pulchellus or Robin’s Plantain: 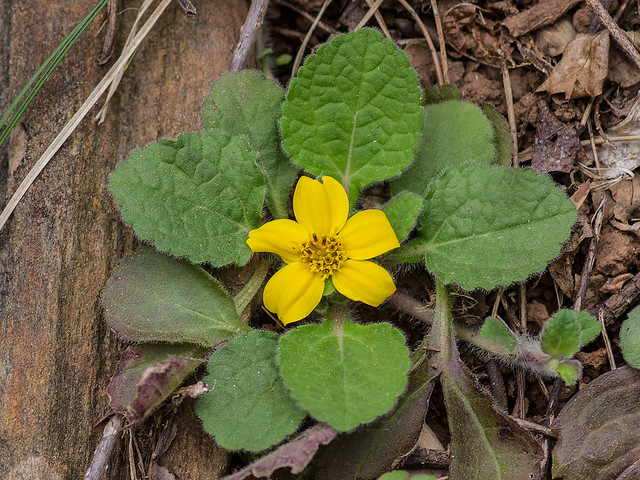 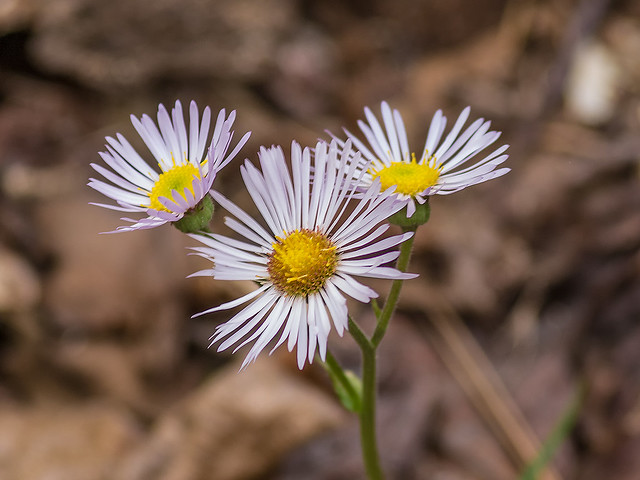 As we walked down the trail, I was surprised to find a Tiarella cordifolia or Heart-leaf Foamflower coming into full bloom, especially since the large majority of them were in tight bud: 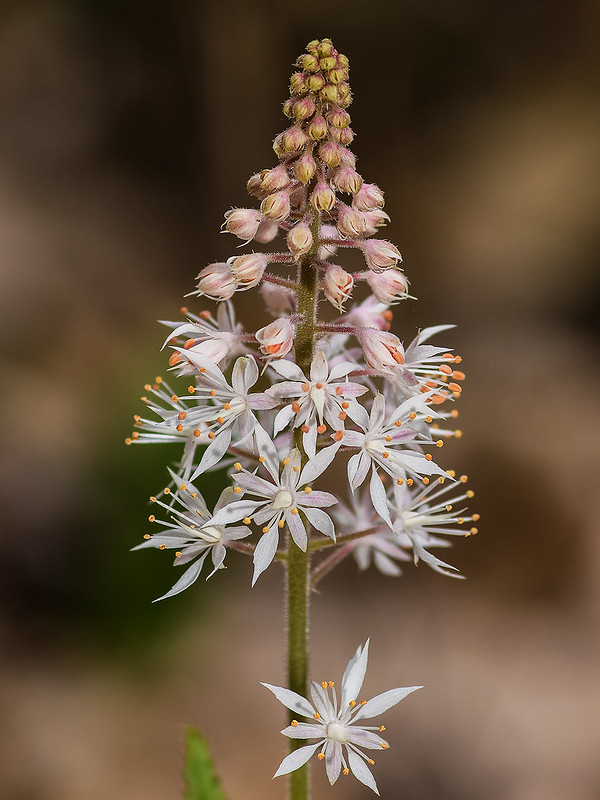 All along the trail were many excellent specimens of Thalictrum thalictroides or Rue Anemone. These show up quite well against the brown and tan of the forest’s leaf litter: 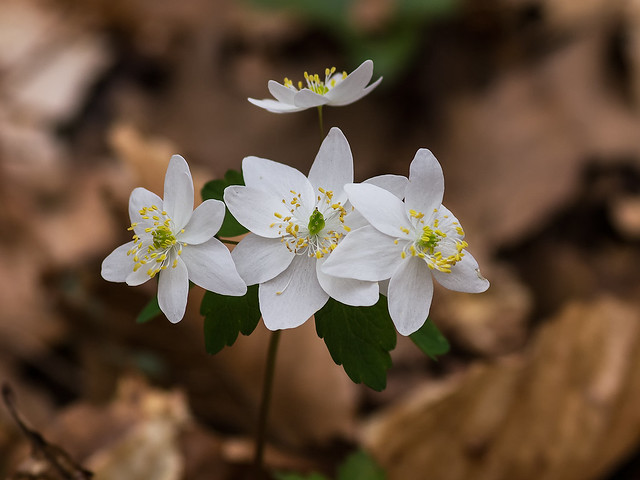 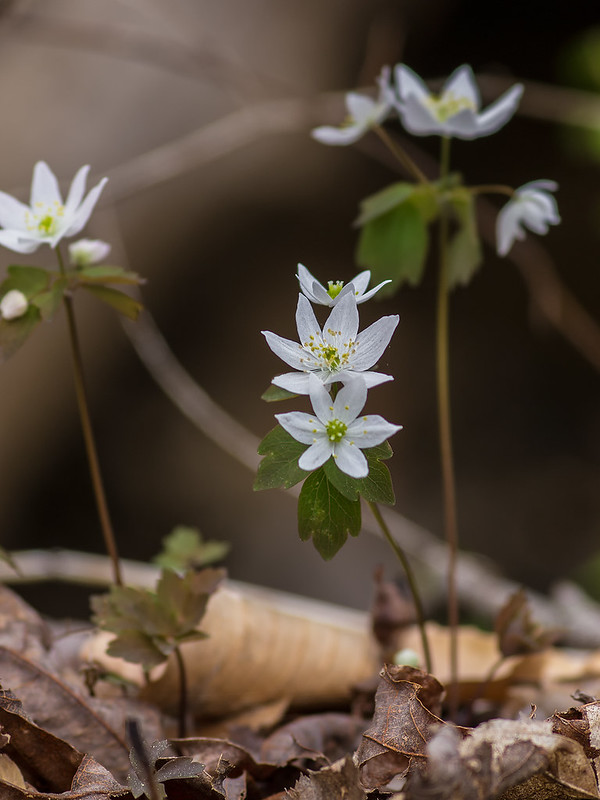 We saw many specimens of Sanguinaria canadensis or Blood Root, but they were all in tight bud except for this one. They don’t open their flowers until there is the proper amount of sunlight overhead. Since it was very cloudy, all of the other Blood Root flowers were tightly closed. Who knows why this one was open: 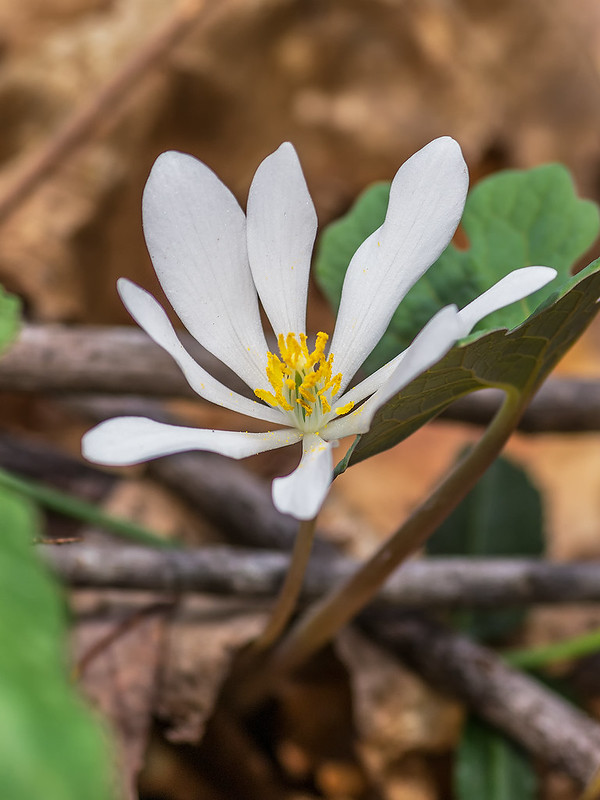 We finally came to the portion of the trail that crosses the stream at the base of the waterfall. On that side of the stream, there were dozens of patches of Viola Canadensis or Canada Violet. These pretty, white Violets never disappoint. As the plants mature, they will produce quite a few flowers above the green foliage: 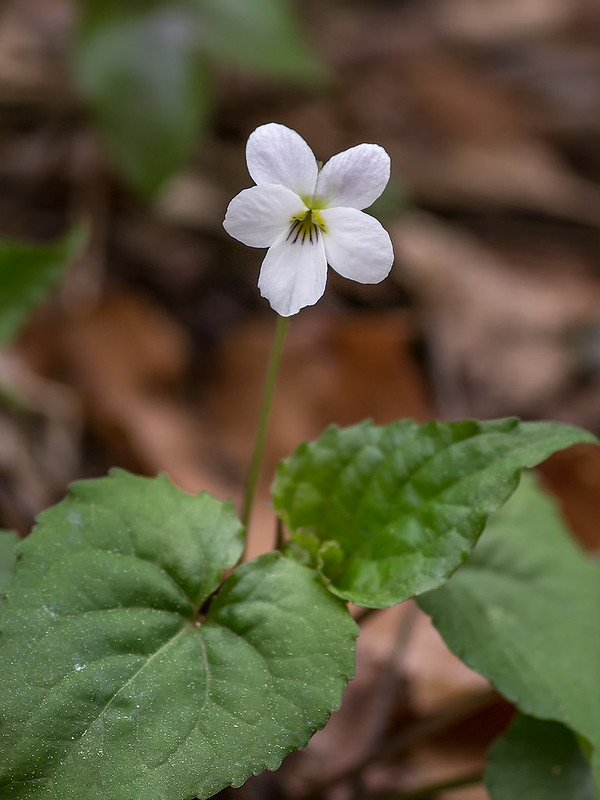 Growing next to the stream were clusters of Osmundastrum cinnamomeum or Cinnamon Fern Polystichum acrostichoides or Christmas fern in all stages of maturity. I found a few fronds that I though were especially pleasing:

[Update 2016-03-22] I have been corrected about my identification of the fern fiddleheads. Being woefully inadequate in my knowledge of ferns, I didn’t recognize that they were indeed the beautiful Christmas Fern fiddleheads. I apologize and will brush up on my ferns.

Even the Arisaema triphyllum or Jack-in-the-Pulpit were in fine shape. I managed to find one that had grown up through the hole in a leaf: 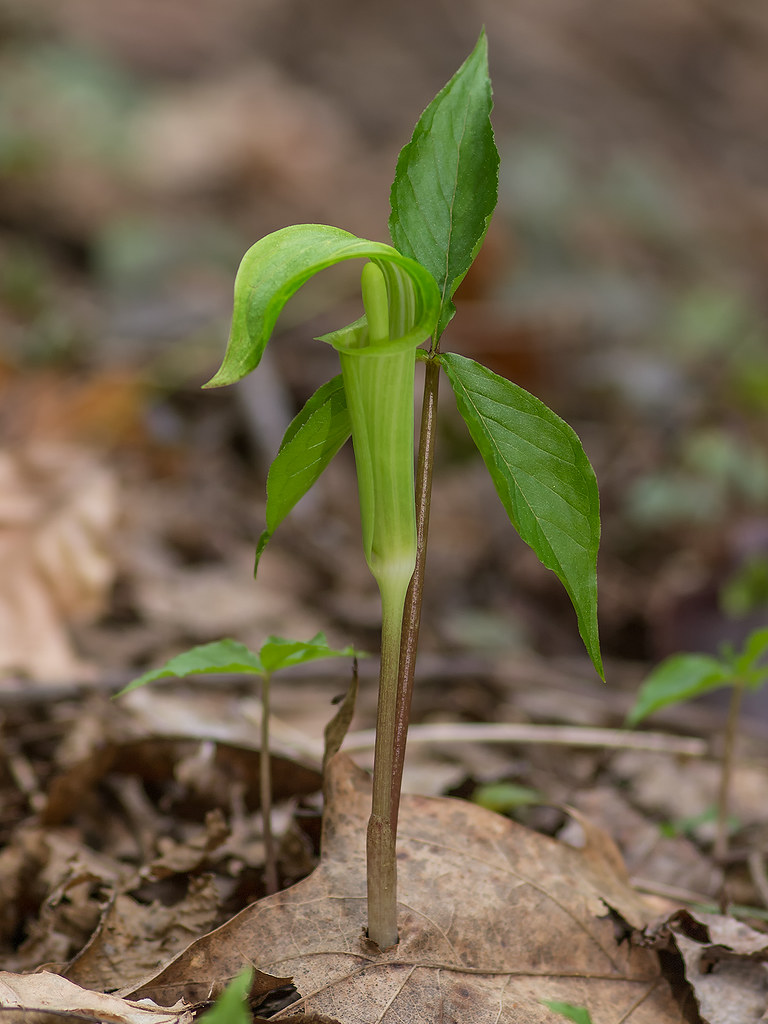 This brought us to the base of the 60-foot (18-meter) water fall called Station Cove Falls: 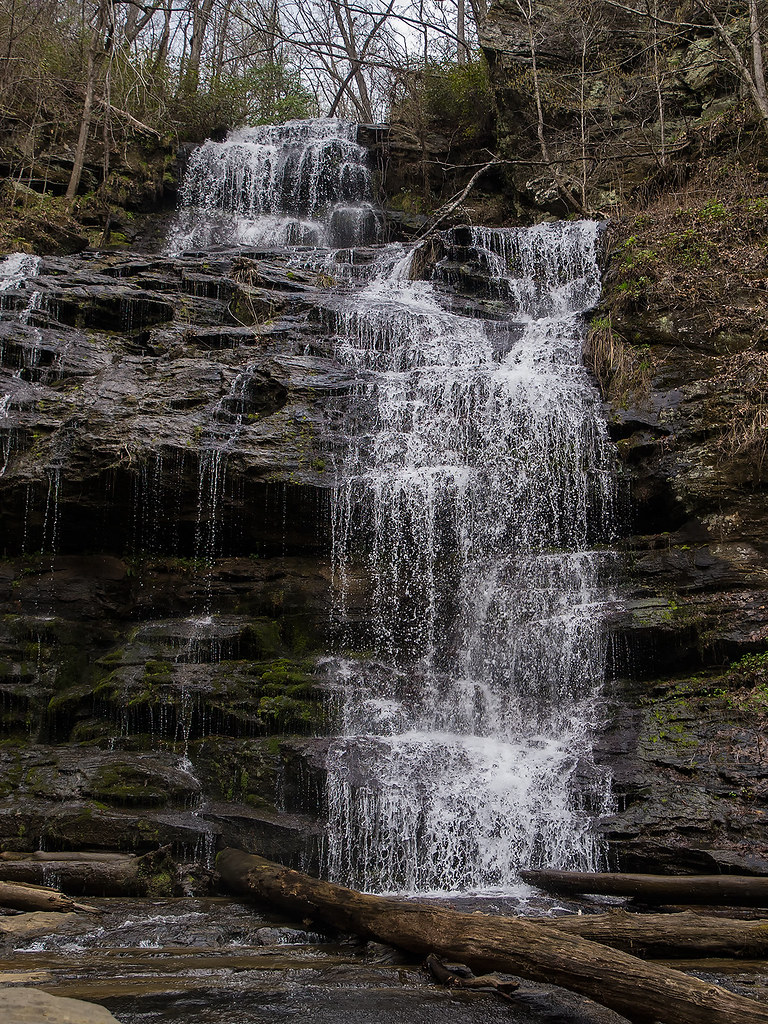 We relaxed a bit on the large boulders next to the stream, joining others who had come down to see the water falls and wildflowers. But our time there was short. The clouds were darkening and I felt a few drops of rain, so I knew it was time to retrace our steps back the 1-mile (1.6 km) distance to the shelter of my truck.

On the way back, we marveled at the colorful show of wildflowers we had seen on this field trip day. Jeremy and Katie had added a number of new species to their life lists, and I had reveled in photographing these beauties once again. Once we reached the truck, it began to rain in earnest, and I thought of the people who were still on the trail. The drive back to Greenville was punctuated with some serious showers, but we were safe and dry in the truck.

Before reaching home, we stopped at a small restaurant in Travelers Rest where we had either a late lunch or an early supper. We talked about what we had seen and decided to get together again soon for another spring day trip to the natural areas of the Southeast. What a great day out in the field — this time with some new friends. It just can’t get any better…