The subject matter for this post, Part 2 of 2, is quite limited and will probably appeal to only a few of you, but you never know. So that you are prepared, the subject matter is quite “geeky”, botanically speaking. As I mentioned in Part 1 of 2, my good friend, Alan Cressler had asked if I could point him to one of our little-known clubmosses, Dendrolycopodium hickeyi or Hickey’s tree-clubmoss. I was happy to oblige. Please join our adventure as we search an area along the Blue Ridge Parkway in western North Carolina for this denizen of the Appalachian Mountains.

But first, a little background: Lycopodiaceae or the family of clubmosses has always interested me. In fact, it was my passion before becoming acquainted with Orchidaceae. I was struck by their primitive nature and how they seemed to occupy a special niche in the natural order of things.

According to the Virginia Native Plant Society, “The common name ‘clubmoss’ is based on the premise that at first glance these plants resemble mosses (mosses are bryophytes and thus, non-vascular plants), and because they often have club-like structures [sporangia] that produce spores. Clubmosses are all perennial evergreen plants with numerous small leaves. Individual plants in many species are connected by horizontal stems that run above ground (runners) or below ground (rhizomes); the actual roots are rather shallow. None of the clubmosses are flowering plants, but all are vascular plants with an interesting strategy of releasing spores at a life stage that few people see—outside of a science lab.

Clubmosses or Lycophytes evolved some 410 million years ago as one of the earliest groups of vascular plants (plants with special tissues xylem and phloem to conduct water and food, respectively, in this group of plants). Some 300-plus million years ago, tree forms of both clubmosses and horsetails along with ferns dominated the great coal swamps of the Carboniferous geological period. Tree forms of tree clubmosses that once reached heights of 100 feet have left an excellent fossil record of the woody tissue of tree forms.”

Worldwide, there are 10 to 15 genera and 350 to 400 species of clubmosses. The following represents those species found in the Southeast: 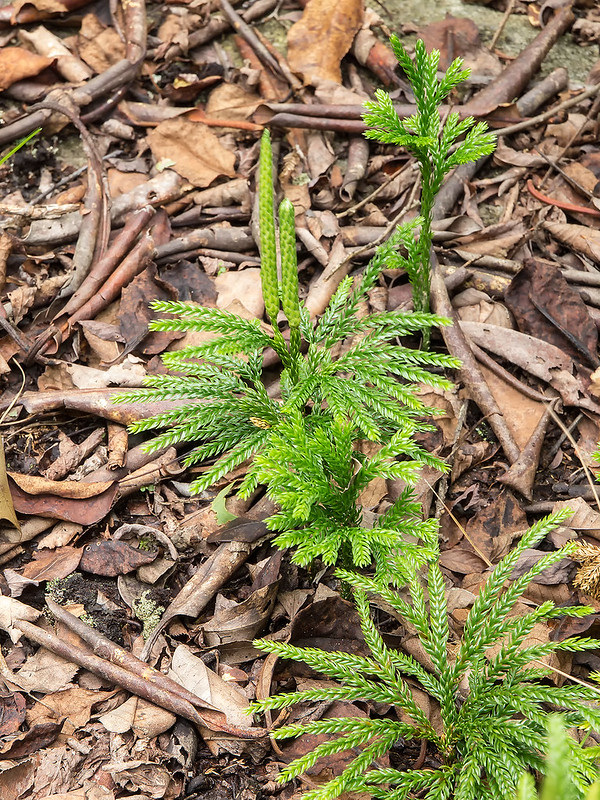 Many of you are already familiar with some of the Dendrolycopodium species, because if you go hiking almost anywhere in the Southern Appalachian Mountains, you will frequently see them. And they do look like miniature pine/cedar trees. However, what you may have overlooked is the subtle differences between two of the species. I will mention that we do not have one of the species in our immediate area — it is found farther north. That one is Dendrolycopodium dendroidium or Prickly tree-clubmoss (not in the above list). I’ll leave it up to you to Google it and see what are the distinguishing characteristics, but the common name is a big clue.

So, what we need to do is to be able to distinguish between D. obscurum or Common tree-clubmoss and D. hickeyi or Hickey’s tree-clubmoss. They both grow in the same area that we visited and are quite similar looking upon first glance. Here is a chart that I appropriated from the American Fern Journal which we used as an identification guide. It was printed in 1977, so I’m guessing it is now in the public domain. If it’s not, I’m sure I’ll hear about it… 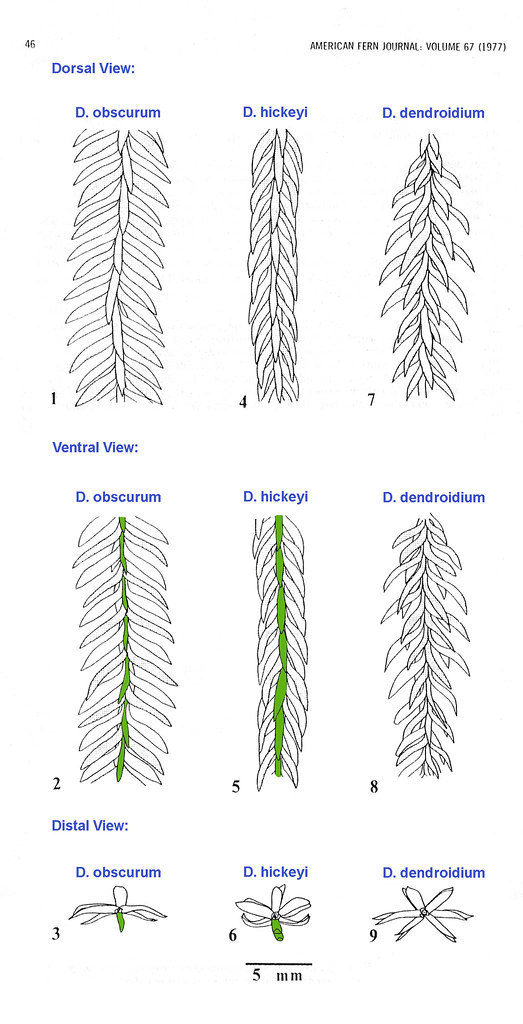 There, that’s all there is to it!

So, let’s get to the adventure…

We made our way to the Graveyard Fields Overlook (Mile Marker 418.8) on the Blue Ridge Parkway. What with it being the beginning of Labor Day weekend, I wasn’t sure what to expect, traffic-wise. It was quite cloudy (great for photography), and threatening rain at any moment, so I figured that people would find something else to do beside hiking and scenery viewing. Boy, was I wrong. There was not a parking space anywhere near the overlook. Regardless, I pulled into the parking area, hoping that someone would be backing out to let us in. There were two cars which did exactly that, but there were three vehicles ahead of us. I pulled through to the other end of the parking lot and turned around to drive back the way we came. After about a quarter-mile (~400 meters), I was able to pull over and park on the shoulder along with dozens of other hapless tourists. We gathered our gear and headed back up the hill to the entrance steps to Graveyard Fields.

Now, I have to tell you that the last time I visited Graveyard Fields and found the D. hickeyi plants, was about 20 years ago. But I had no reason to believe that they would not still be growing there in the expansive meadow below. We made our way down the steps, dodging hikers, tourists, and those who like to perch on tree limbs while taking selfies. I didn’t remember that the descent was so steep, but, after all, I’m 20 years older. One other thing I didn’t remember was that there are several stepped entrances to Graveyard Fields. We took the one that leads off to the right, the one that leads to the main waterfall. We ended up having to find another trail that branched off of that path to lead us to the meadow.

Let me take a minute to explain how the name, “Graveyard Fields”, came to be. The area got its name years ago from the tree stumps and surrounding trees that looked like weathered grave stones in a graveyard setting. Earlier, most of the trees had been toppled by a huge wind several hundred years ago. Then in 1925, an intense fire burned the recently logged area, and since then, the forest has been slow in recovering. The large meadow has begun to fill in with saplings, but it is still an open area with lots of blueberry bushes and lots of grass. Speaking of blueberry bushes, I laughed to myself when, on our way down the steps, we saw a young girl with a plastic pail. I assumed that she was there to gather blueberries, but I just knew that mid-August was the peak of blueberries for the area. Little did I know that there were tons of blueberries still on the bushes! While Alan was doing his photography, I was grazing on the berries — there’s no comparison between store-bought and wild-grown berries. I wished that I had brought my own pail… Here are a couple of shots of the berries:

We wandered in the large meadow checking each tree-clubmoss plant that we found for the tell-tale signs that it was D. hickeyi. It didn’t take us long to find what we were looking for. I would say that close to 40% of the Dendrolycopodium plants that we found were D. hickeyi. Success! The rest of the time was spent choosing the best of the plants to photograph. Well, let’s say that it was Alan’s job to do so. I was satisfied to photograph at least one specimen of each species, and I was not so choosy. Here is a shot of Alan bending over doing his thing in the grassy meadow: 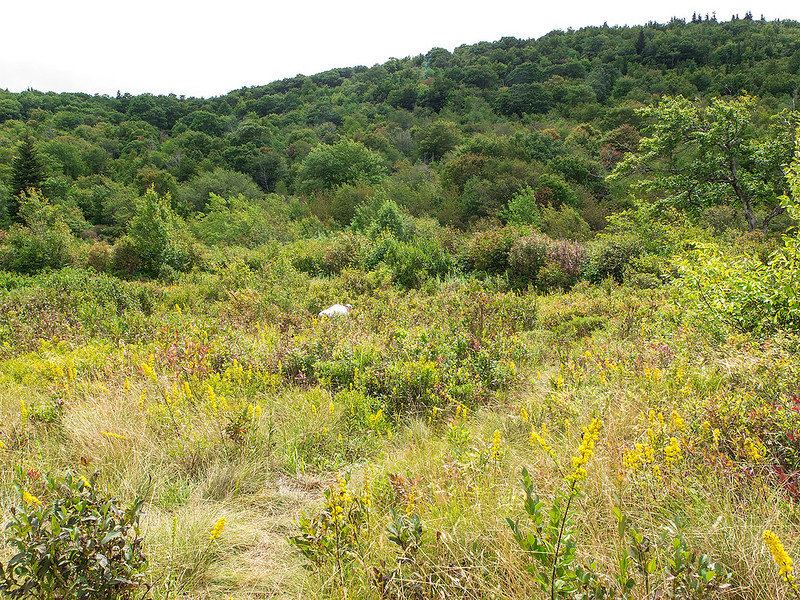 Here are a few of the D. hickeyi plants that I photographed: 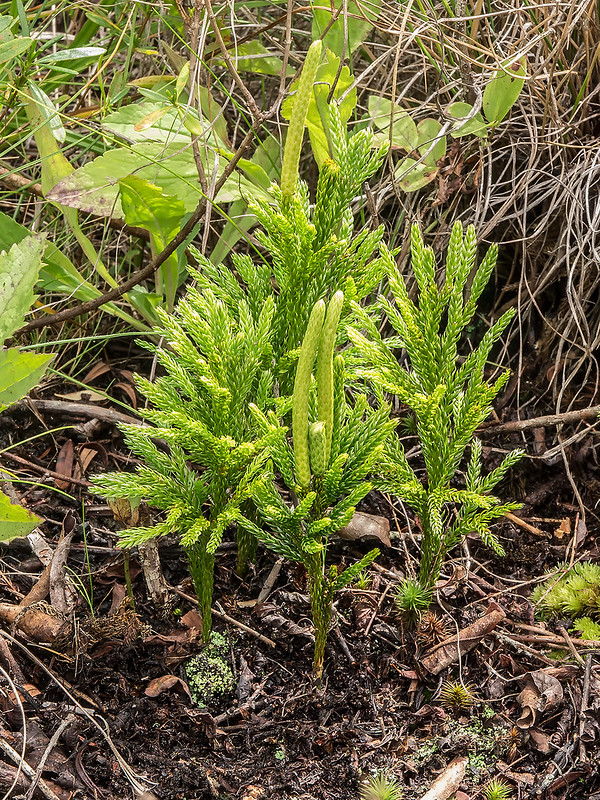 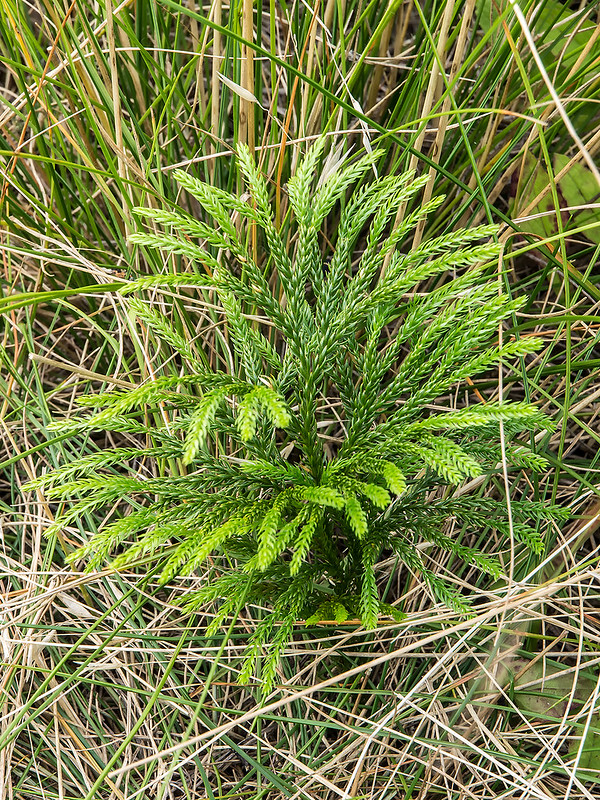 Well, we had gotten what we came for. It was time to head back to the truck. The climb up out of the meadow gave a good workout to my quads. Allan beat me to the top and was waiting for me when I arrived. He suggested that we head across the road to the slope where he had seen some sporangia sticking up out of the grass on one of our trips through the parking lot. So, that’s just what we did. 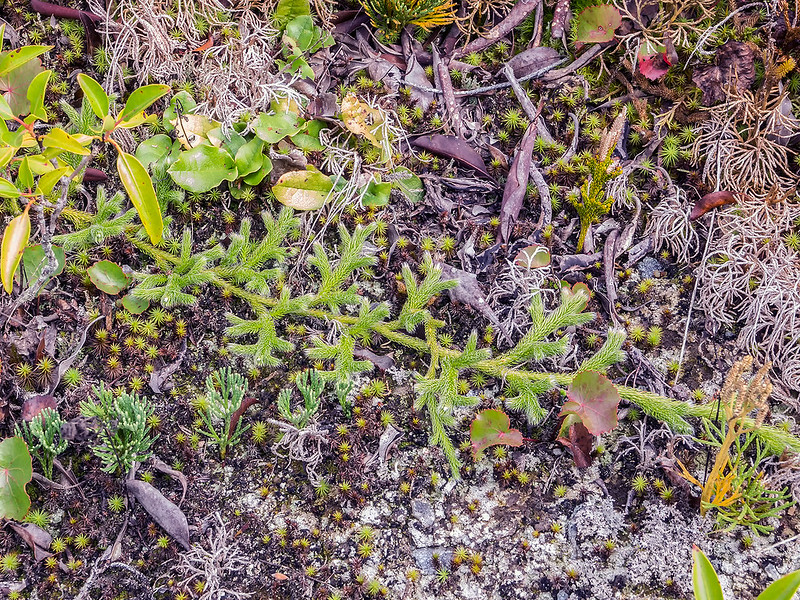 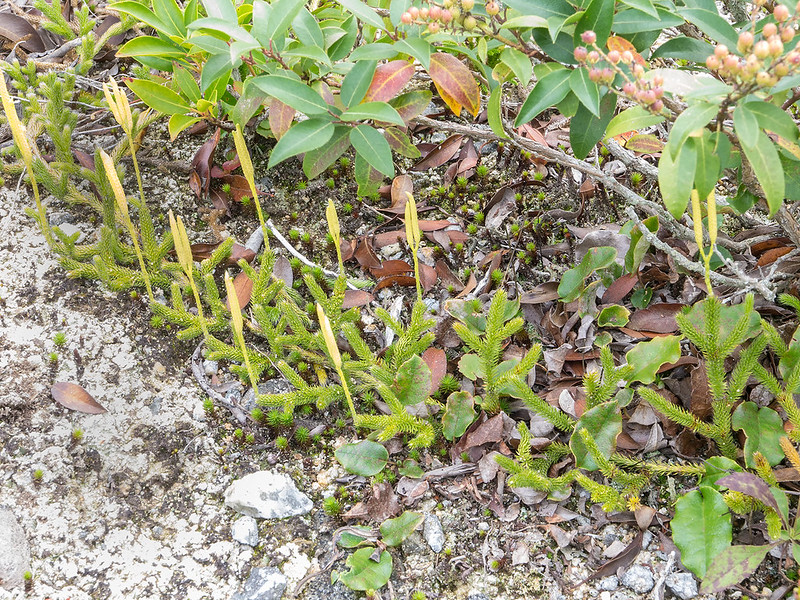 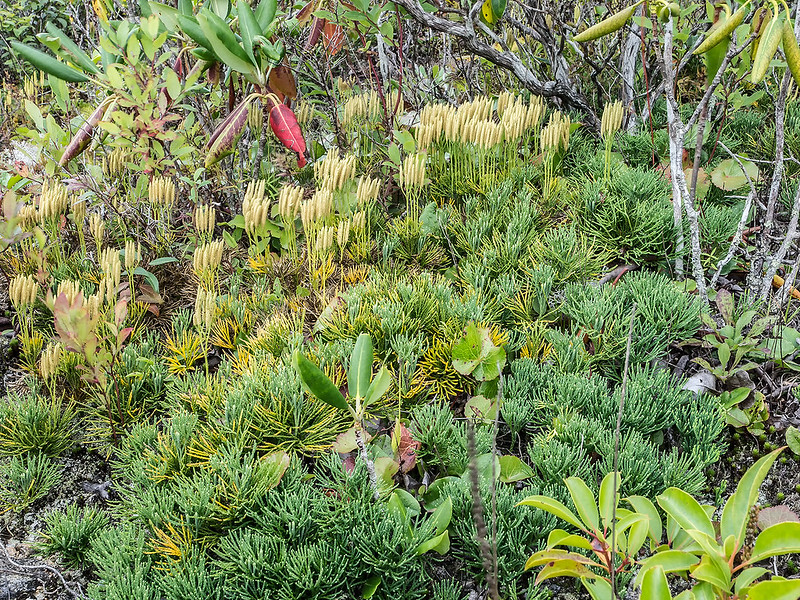 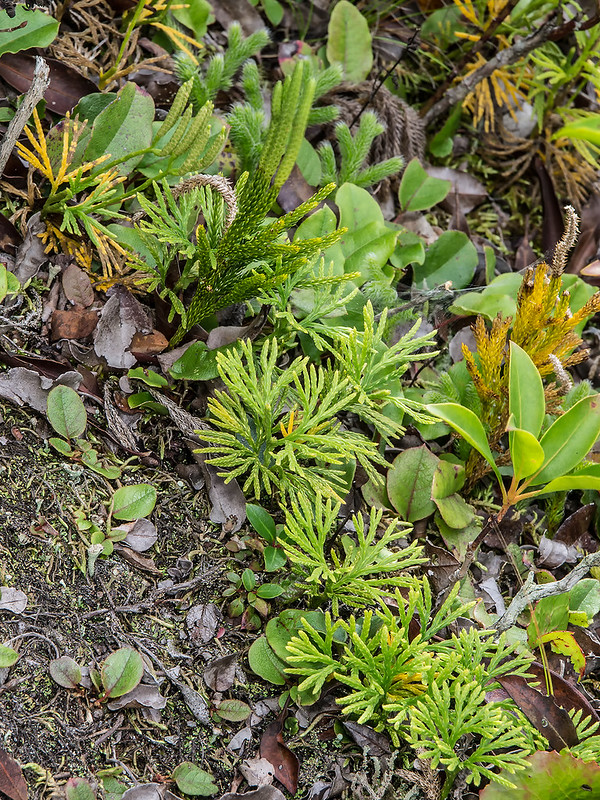 I should mention here that there were probably hybrids between the D. tristachyum and D. digitatum, especially since they were growing in and among each other. The hybrid is known as Diphasiastrum X‌habereri. I have found it on other occasions, but we did not have time to look for it on this trip.

Another great day out in the field with a good friend. We really hit the jackpot without really expecting it. Next time, we won’t have to hike out into the meadow at Graveyard Fields, we can just hit the slope across the road from the parking lot. Who knew!?! I hope this was informative in a way that wasn’t too tedious. I find it fun to put together such a blog report, and maybe you learned a little something along the way.