Fall brings a special group of wildflowers to the Coastal Plain of South Carolina — the Francis Marion National Forest, to be specific.. I generally make a trip around the last week in October to photograph Spiranthes odorata or Fragrant Ladies’-tresses orchid, but this year, I decided to go down a bit early so that I could see Ponthieva racemosa or Shadow-witch orchid in full bloom. Last year, my friend, Jeff Jackson met me down there (he lives just a stone’s throw away in Charleston, SC), but we hit the tail end of the bloom, and I wanted to see it at its peak. The day before I was leaving, Jeff texted me that something had come up, and he would not be able to join up.

For me, the trip takes about 4 hours each way from my home in Greenville, SC, so I had to prepare myself for a lengthy day-trip, particularly since I would be spending another 3-4 hours driving around for other photographic opportunities. I figured I’d be too early for the Fragrant Ladies’-tresses orchids, but I also knew that there would be other interesting wildflowers to keep me occupied.

Again, the target species was the Shadow-witch orchid. Here is an image of this species: 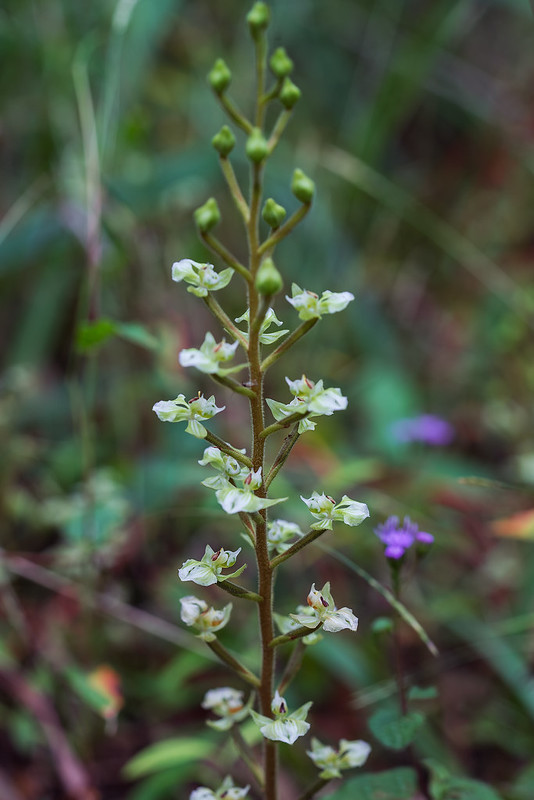 The genus is named after Henry de Ponthieu, an English merchant of Huguenot ancestry who sent West Indian plant collections to Sir Joseph Banks (an English naturalist, botanist, and patron of the natural sciences) in 1778. There are approximately 60 species in this genus, worldwide, and many of them produce strikingly colorful flowers. Click HERE for a selection of images from a Google search.

This is an odd-looking species; the flowers are held out away from the stem at an angle of 45-60 degrees. That makes it rather difficult to photograph, because it means that the camera has to be positioned slightly above the raceme in order to show the tops of the flowers. To make matters worse, the several sites I know about in the FMNF, provide a grassy habitat for the plants so that some clearing away of vegetation is required to get a clean shot of the plant. Here are some examples of the typical habitat for this species in the FMNF: 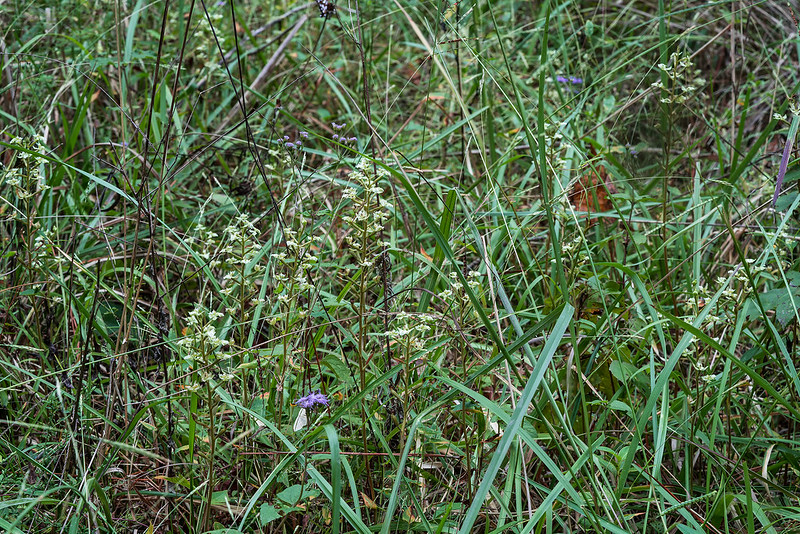 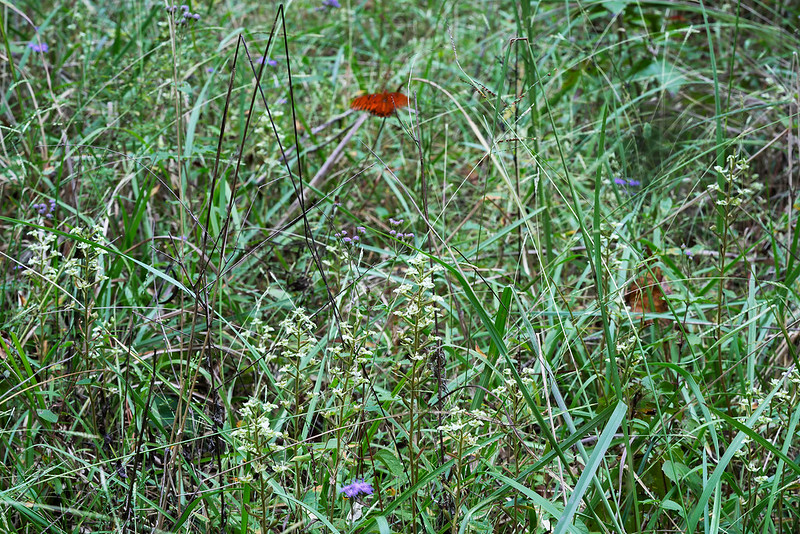 Let me back up a bit in time… The premier habitat for this species is on the extreme eastern side of the national forest. This species requires a rather high pH, which is provided by the leaching of calcium from crushed oyster shells that have been used to resurface the forest service road. This is an example of the serendipity that occurs when the Forest Service maintains the roads with a substrate that the orchid love. This site is very near the Santee River which separates Berkeley County and Charleston County from Georgetown County. The plants are found in rather large numbers along the edge of a forest service road near a small creek.

As I round the curve and approach the site, I am startled to see that a tree had fallen across the narrow forest service road, presumably during the recent Hurricane Dorian. The forest service usually wastes no time in clearing these service roads, especially if tree-fall prevents the timely inspection of the forest. They had done a fine job of removing the debris, except……. they dragged the large limbs and tree trunk pieces across the road and placed them DIRECTLY onto the center of the orchid population!!! Here is an image of the site: 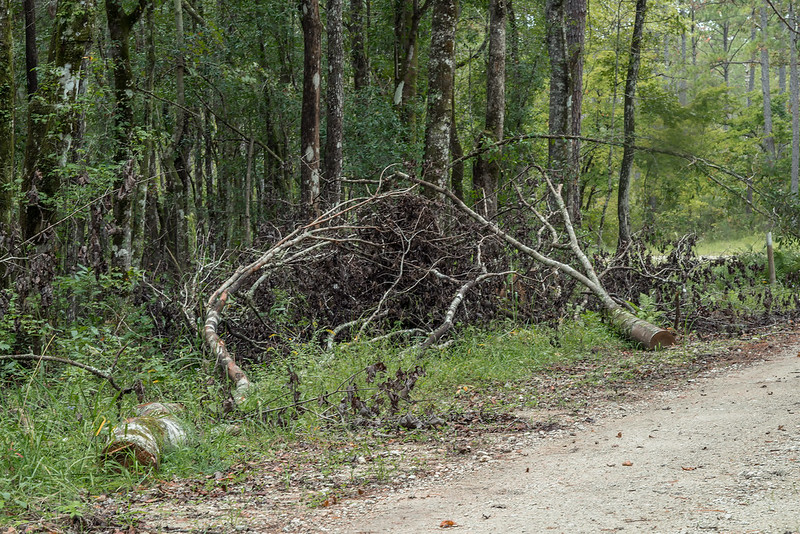 I got out of my truck and stood there, mouth agape! It was a depressing sight. I kept yelling, “WTF, WTF!!!” Naturally, I did not yell the abbreviations, if you know what I mean. Of course, I cannot fault the Forest Service personnel for not knowing that they had covered the premier site for this rather rare orchid species. This was a large tree, and I did not have the proper equipment to move the debris down the road to a more “suitable” site. I may call the headquarters and ask them to clear the site, but I expect it will not be high on their priority list. I suppose as long as it is moved before next spring, the plants will recover.

The good thing is that this orchid habitat does stretch a bit down the road, and I managed to find a good number of plants that had been outside of the debris pile.

Here are some additional images of the flowers of the Shadow-witch orchid:

After photographing the Shadow-witch orchids and regaining a modicum of composure from the experience, I gathered my camera gear and continued up the forest service just a short distance to the site where Jeff and I had seen a large population of Fragrant ladies’-tresses orchid the previous year. I didn’t expect to see them in bloom and wasn’t surprised when I found them just beginning to open. Here is the one that was the furthest along in flowering: 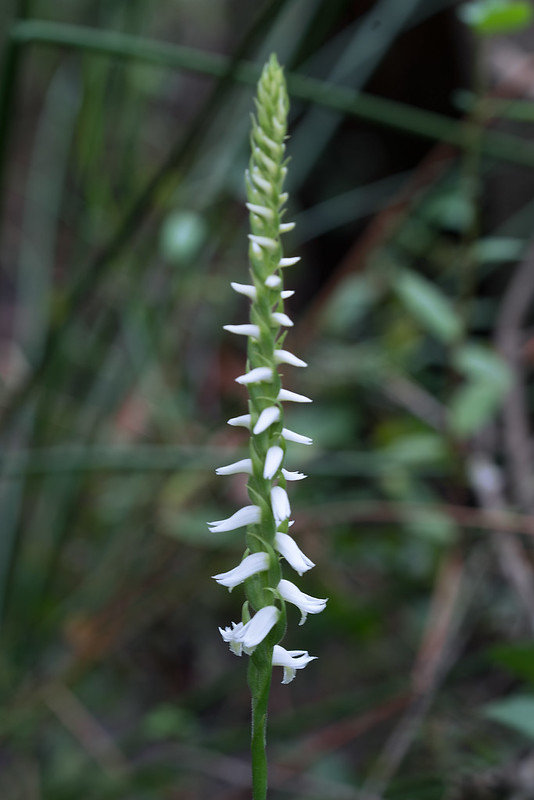 So, it was now time to head west to inspect the populations of some of the other wildflowers I had seen along the way.

This time of year usually brings out a flurry of pink/purple flowers in the national forest. The most common of these is Trilisa paniculata or Deertongue. It is also known as Carphephorus paniculatus or Hairy Chaffhead. I’m not sure which name is in current vogue, so I’m listing both of them. In certain places, this species lines the roadside for a considerable distance. Here is an image I took last year (I neglected to get a group shot this year): 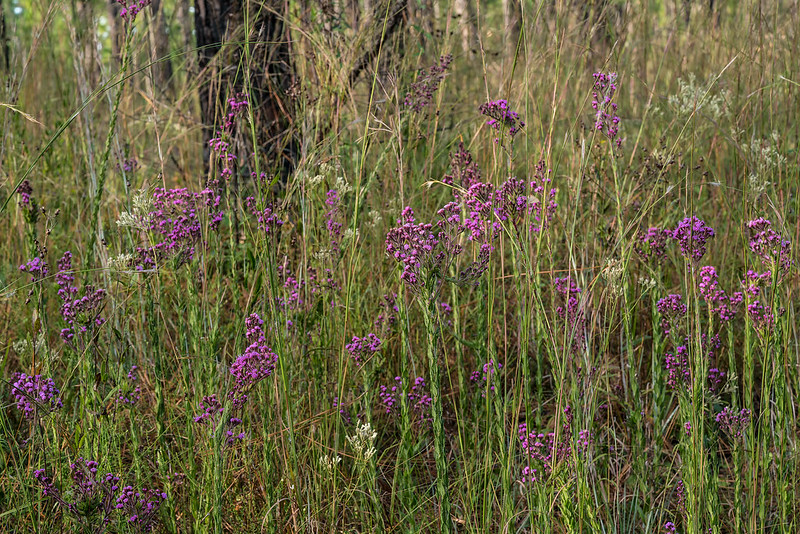 Here are a couple of images of the ones I saw on this trip: Note the extreme hairiness of the stem. This was a very good year for this species. A couple of years ago, I managed to find the very rare white form, so I decided to try to see if I could relocate it. Fortunately, I did find one plant, but I don’t know if it is the one I originally found. Here are some image of this plant: 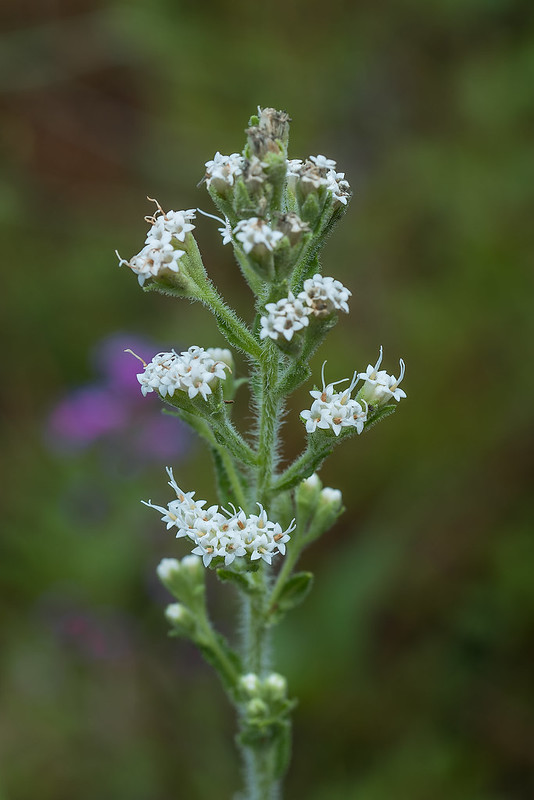 In looking for this white form of Deertongue, I kept passing a few populations of one of the prettiest of the Liatris species in the forest: Liatris elegans or Pinkscale Blazing Star. It can be found from Texas, east to Florida, and north to South Carolina. This particular site, in the FMNF, is one of the northernmost sites for the species along the Atlantic Coastal Plain. In any case, I was happy to find it doing so well.

This species does get fairly tall, so much so that it tends to droop over to the ground in many cases. But I did find one plant whose bloom stem was about 4 feet (1.2 meters) tall: 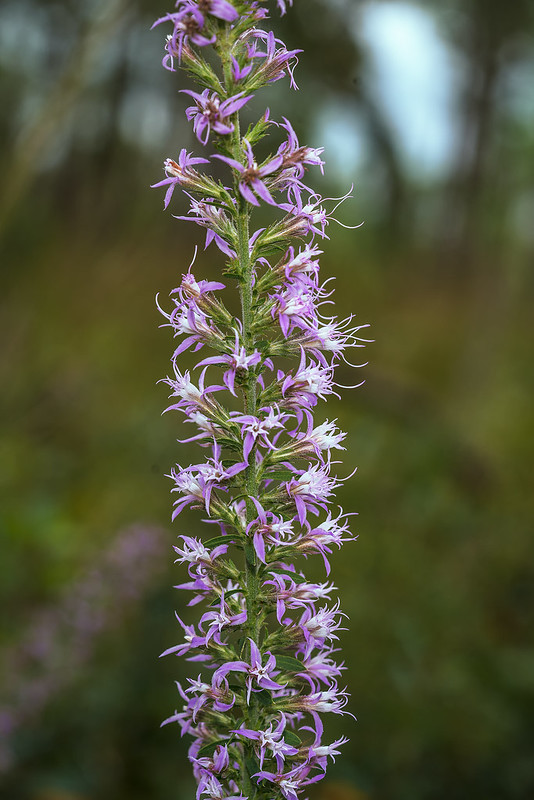 Here are a couple of close-ups showing the true beauty of these wildflowers:

Nearby, were groups of plants with small pink flowers and extremely narrow leaves: Agalinis purpurea or Purple False Foxglove:

It was getting to be late in the day, but I wanted to check out another site for Fragrant Ladies’-tresses orchids. This particular site has produced a variety of plants with varying morphology. Here are some shots of a few plants I found – a few of which were quite well along with their blooming: Although I had applied mosquito repellent quite liberally, they were about to drag me away for a meal, so I had to finish up before I really wanted to. This particular area is always filled with swarms of those bad boys (and girls) every year until the first frost.

While heading back, I passed a roadside site where I had photographed Platanthera ciliaris or Yellow Fringed orchid in mid-August was amazed to see a couple of them still blooming in the ditch! Although the flowers were definitely not a peak bloom, I had to document this occurrence. While most of the plants were well into producing seed capsules, there were a few flowering stalks in bloom:

I finished up, packed up my camera gear and began the drive home. Heading west, with the sun reflecting off the Pinus palustris or Longleaf Pine needles, I had to stop to get a shot of that sight bathed in the afternoon light: While packing up for what I thought was the last time (don’t laugh), I spotted a Junonia coenia or Common Buckeye butterfly on some Deertongue flowers. Although I had seen quite a few of them during the day, they always flitted away as I approached to photographed them. Sorry that the image is not as clear as I would like, but I shot it in a hurry: Although Jeff couldn’t meet me down there on this visit, he promised that we would do this again. I’m hoping to head back down there in a few weeks to catch the Fragrant Ladies’-tresses orchids in full bloom, then head on over to the Green Swamp in southeastern North Carolina for some different Autumn wildflowers. Who knows what will come up before then…