Earlier this week, I visited a new accession to one of South Carolina’s State Parks in the upstate (Greenville County) of South Carolina. For a couple of years, before the property had been added to the State Park, I had visited this site to check out several species of Trilliums and other wildflowers, and during those visits I noticed numerous winter leaves of one of our native orchids, Aplectrum hyemale or Puttyroot orchid aka Adam-and-Eve orchid. This particular orchid has always been one of my favorites, because it is rather showy and has flowers that are about 1/2 inch (13 mm) across — so one can appreciate it without a whole lot of extra magnification.

I had made a visit a week or so earlier, and I saw a good number of flower spikes, but very few open flowers. I figured that by waiting 5 or 6 days, I would be rewarded by some fairly presentable orchid blooms. I wasn’t wrong. There were a couple of dozen plants in flower. A great start to my day!

Here is a range map of the species, compliments of Biota of North America Program’s (BONAP) North American Plant Atlas. This map is somewhat out-of-date as all range maps are, due to lack of current information. The color codes are: Green — present and not rare; Yellow — present and rare; Orange — historic and probably extirpated: 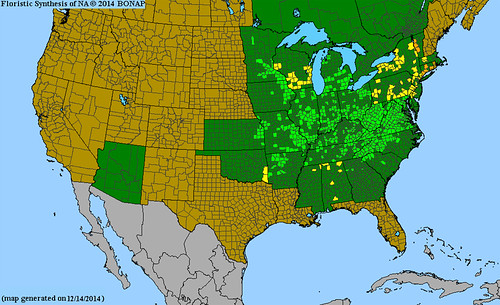 I figure that most of you will know, already, what this species looks like in bloom, but just in case it’s new to you, here is what a typical Puttyroot orchid looks like: 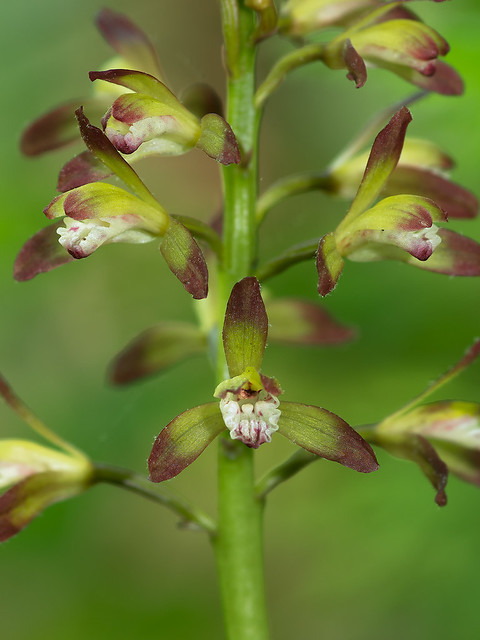 BTW, for this blog report, I’m mixing recent images with images that I’ve taken over the years while looking for photographic opportunities with this species.

Disclaimer: This is in no way intended to be a rigorous academic discussion of the species. I am a self-taught naturalist and photographer, not a trained botanist (and I don’t even play one on TV), so please keep this in mind as you peruse the pictures and discussion. What I am presenting to you are my observations and some online research. Having said that, if you find inaccuracies, PLEASE point them out in the comment section, below, so that I might correct them for the other readers.

OK, let’s look at some of the descriptive characteristics of the Puttyroot orchid. From eFloras.org‘s Flora of North America, here is the text portion of their key entry: 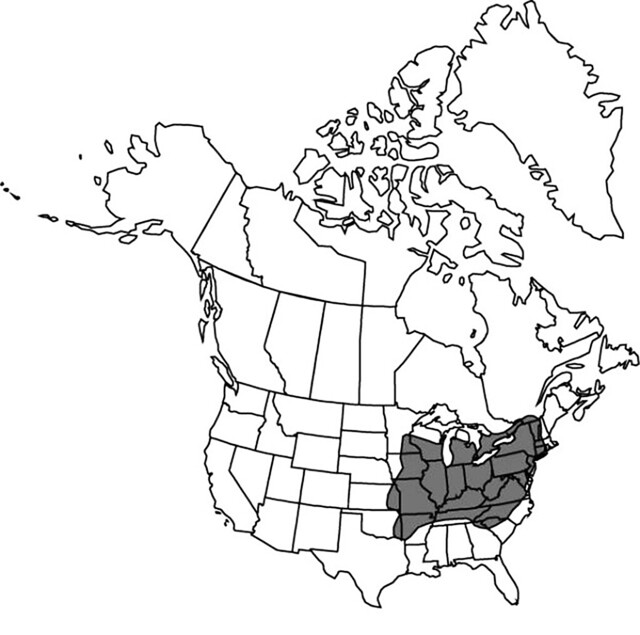 Note that the description leaves out South Carolina although the map includes it. As I mentioned earlier, many botanical maps and descriptions are out of date. As seen in the above description, one of the facts about this species is its preference for “Moist, deciduous, upland to swampy forests”. In our neck of the woods, I often see it growing near streams or in very damp soils. Incidentally, the genus, “Aplectrum” comes from the Greek prefix a, meaning without and plectron, meaning spur. The botanical epithet, “hyemale” comes from the Latin word, hyemalis, meaning “of winter” or “wintery”, referring to the single, accordian-pleated leaf that is present in late fall and winter and which withers around bloom time: 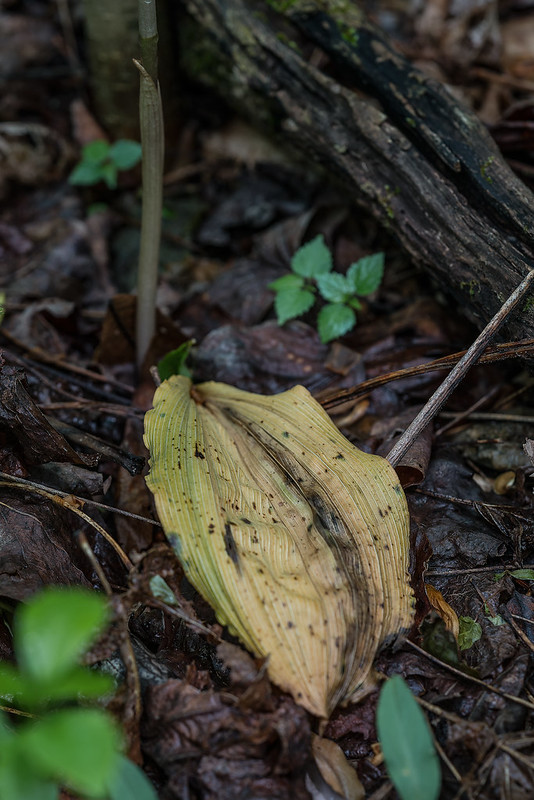 The pollination mechanism for Puttyroot orchid has been studied extensively. I have read several papers which conclude that reproductiion of this orchid is controlled by autogamy and (or) agamospermy. Although certain Halictid-type or sweat bees have been seen visiting the flowers, insect pollinators are apparently not necessary for reproduction.

It also uses vegetative reproduction in the manner of a new rhizome or corm being produced each year to replace the older one. Thus, the common name, Adam-and-Eve orchid, with both the current root structure and the older root structure usually present and joined closely by a root-like connector. Here is an image of a herbarium sheet from the Academy of Natural Sciences of Drexel University showing this feature. Because I am loathe to dig up a specimen just to show a particular feature, I accessed this image through the SEINet Portal Network Image Library, here: 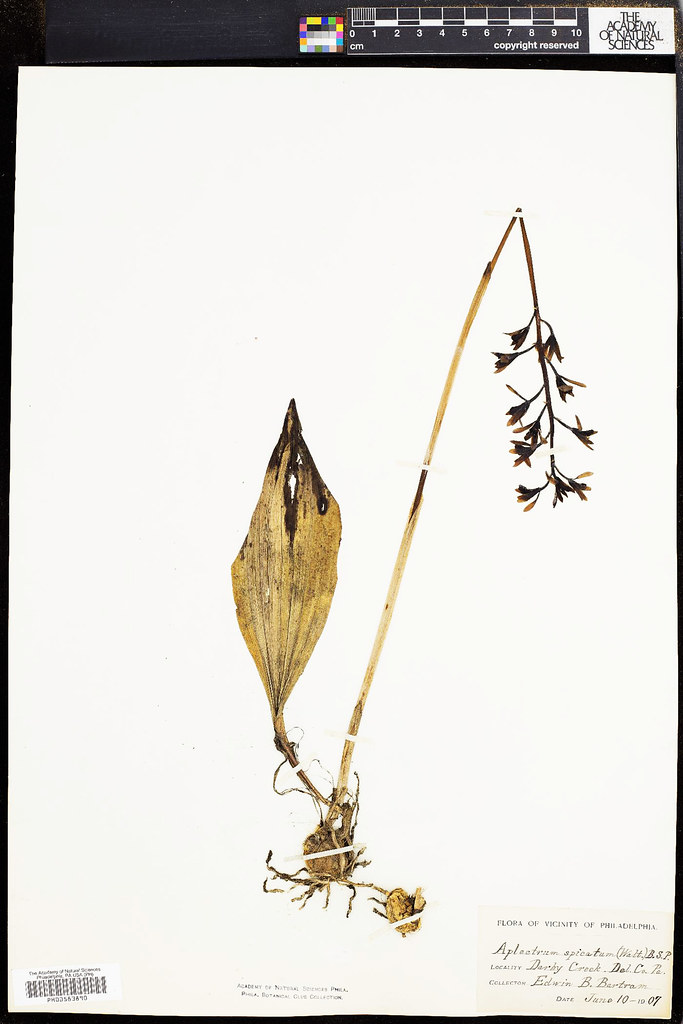 The other common name, Puttyroot, comes from the mucilaginous substrate produced when the corms are crushed. It is “said” that early colonists used this sticky, glue-like substance to repair broken pottery, but I take that with a large grain of salt. It would not possibly hold up if the pottery were washed…

This species has only one color form that is different than the typical color form. And that color is a greenish-yellow without any hint of the brownish purple on the tips of the petals or in the lip. This color form is very rare, at least in the southernmost extent of the species range. Unfortunatly, for me, I’ve never seen this forma in the wild, but my Flickr friend, Pete Grube has, and here are a couple of his images he graciously gave me permission to use. These images were taken in LaPorte County, Indiana:

As time progresses from fall into winter, a solitary leaf is produced from the rhizome/corm. As I mentioned earlier, this plant usually has a pair of corms — one from the previous year, and the current one, which produces the new growth. The leaf is a bluish-green and accordian-pleated, with the higher portions of the pleating being almost white. Here is an example: 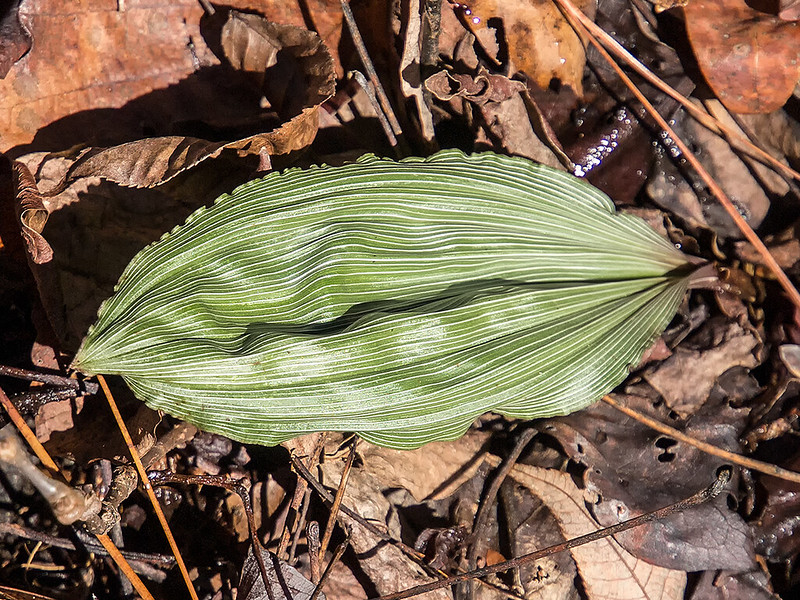 Sometimes, there will be up to a dozen or so plants in a loose grouping, each producing a single leaf: 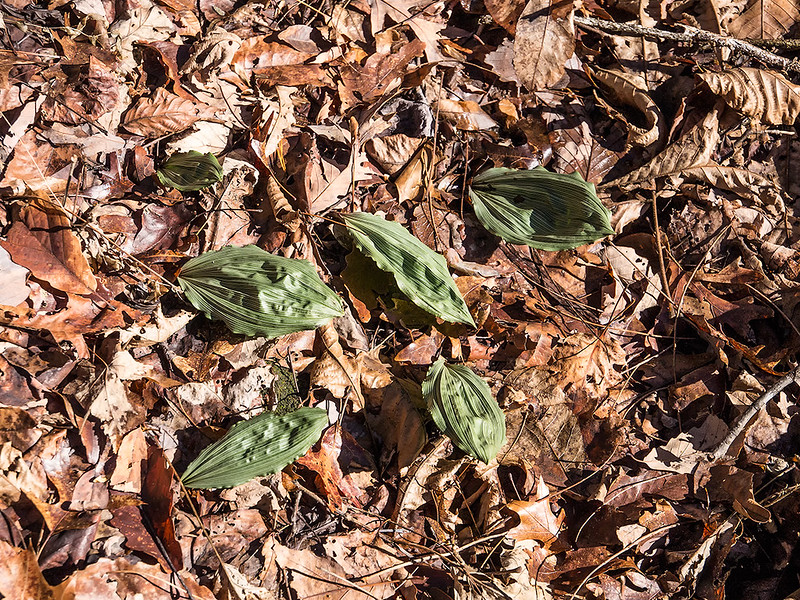 Puttyroot orchid is only one of three orchid species in the Southeast which has a winter leaf. The other two are Tipularia discolor or Crane-fly orchid [below left] and Goodyera pubescens or Downy Rattlesnake Plantain orchid [below right]:

Note that the leaves of the Downy Rattlesnake Plantain orchid are “evergreen” in the sense that they remain on the plant all year and last for a few seasons. The strategy of having winter leaves makes a lot of sense. In the late fall and throughout the winter months, the leaves of these orchids will be able to receive sunlight through the now-bare tree canopy. Thus, they will be able to photosynthesize light during the winter and produce nutrition for the plant to send up a flower stalk in the Spring or Summer.

Around the first week in April, or so, the plant will produce a flower spike. At first, it looks like only a pointed structure protruding from the leaf stem. As it matures, it will elongate and the protective sheath covering the flower stem will split, revealing a cluster of flower buds:

And finally, after about 2 weeks, there is a fully formed inflorescence: 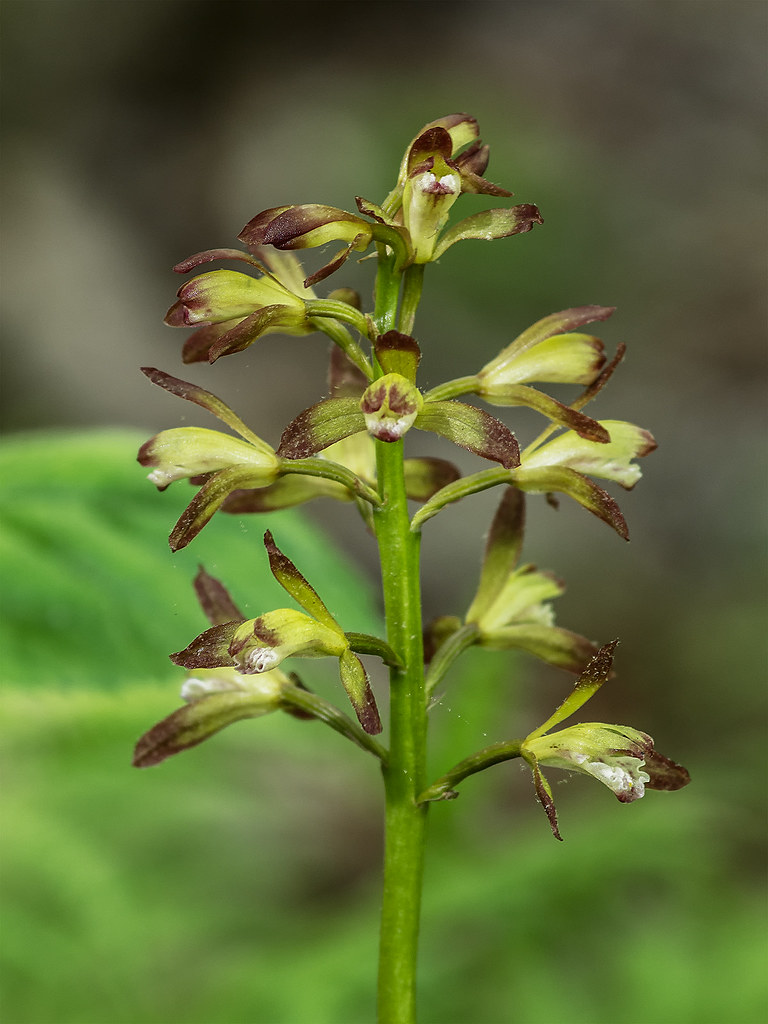 In the summer, just after the flowers have been pollinated (remember that they are predominately self-pollinating), seed capsules begin to form. This first image was taken about 2 weeks after peak flowering: 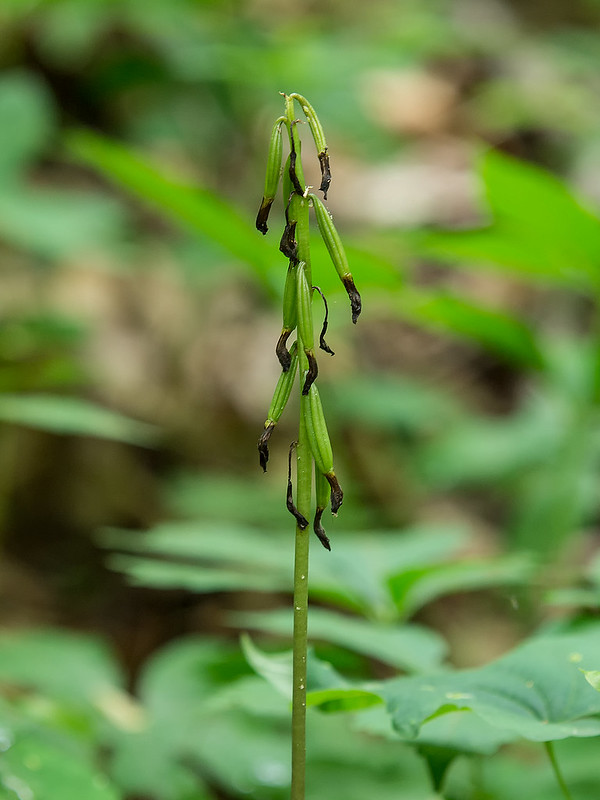 Note that every flower has produced a seed capsule. This is due to self-pollination. Later, these seed capsules will begin to plump up to a much larger size: 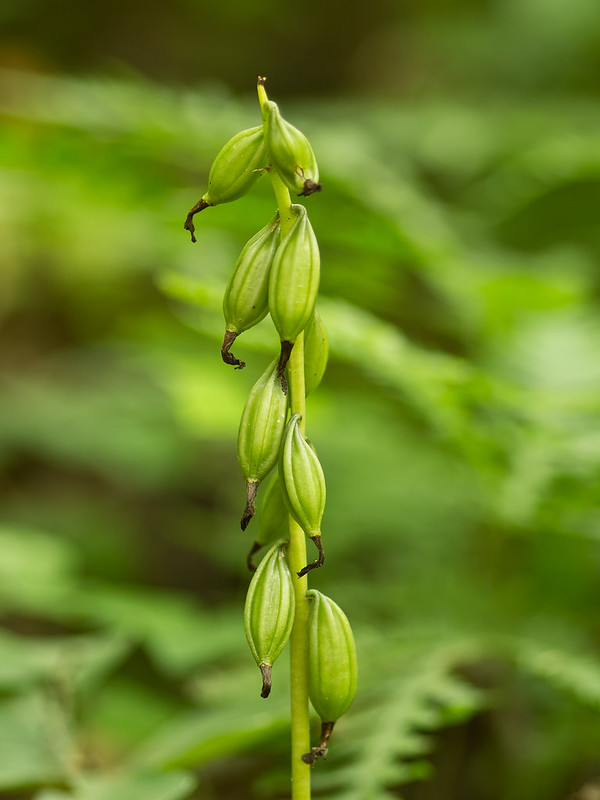 And finally, during the Winter and early Spring, they will ripen and eventually dehisce, and spill their seeds to the wind: 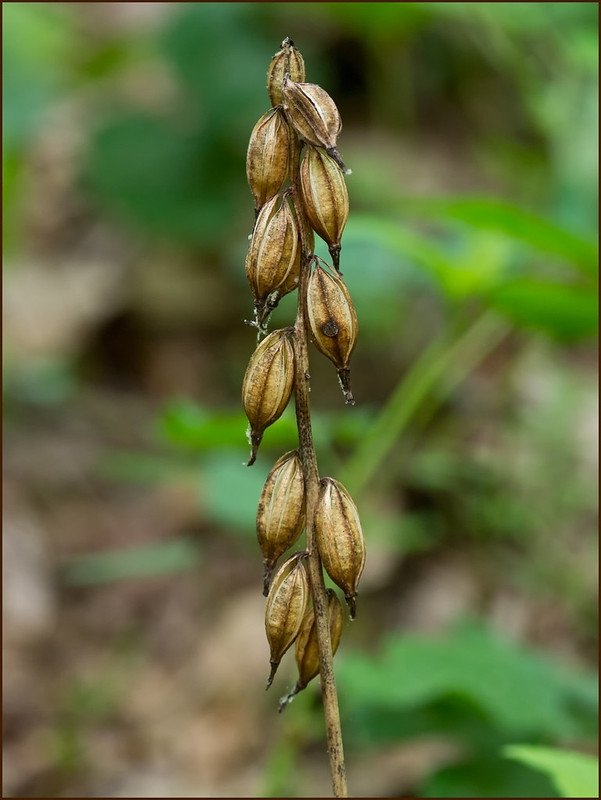 On this last field trip, I did “liberate” a single seed capsule to illustrate the size and large quantity of seeds that one capsule can produce. That is a U.S. one cent piece (penny) for scale: 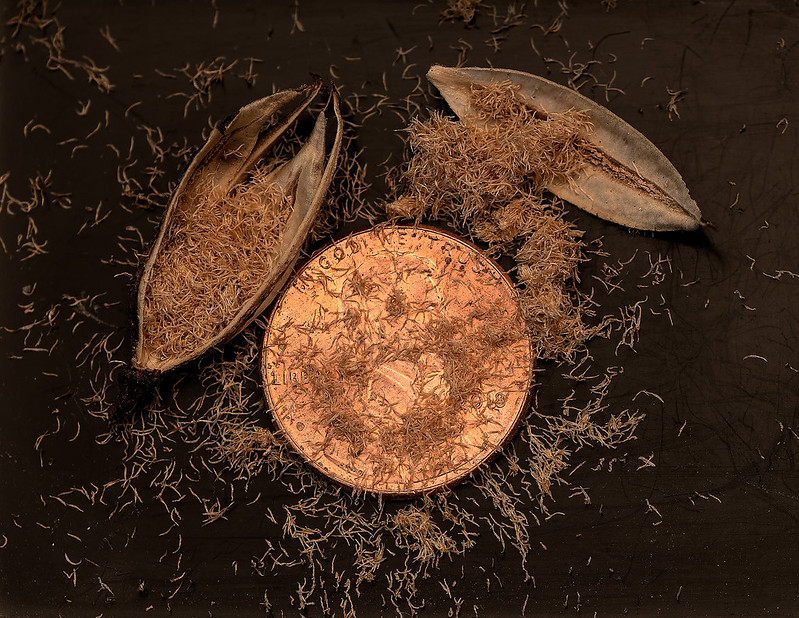 Just imagine what it would be like if each and every seed actually germinated!!! Only in your dreams! 😉

The strategy that almost all terrestrial orchids uses for producing seeds is the same: Don’t go to a lot of trouble to produce seeds that have nutritional storage, but do go to the trouble to produce many thousands of them instead. Remember that orchid seeds require a suitable fungus to be present in order for them to germinate. The chance of their falling on ground with this fungus present is quite small, so that is why many orchids are quite scarce even though they produce many thousands of seeds.

Here are sample images of these orchid flowers I’ve taken over the years. It’s certainly one orchid species I look forward to finding every year, and one you could be looking for this Spring: 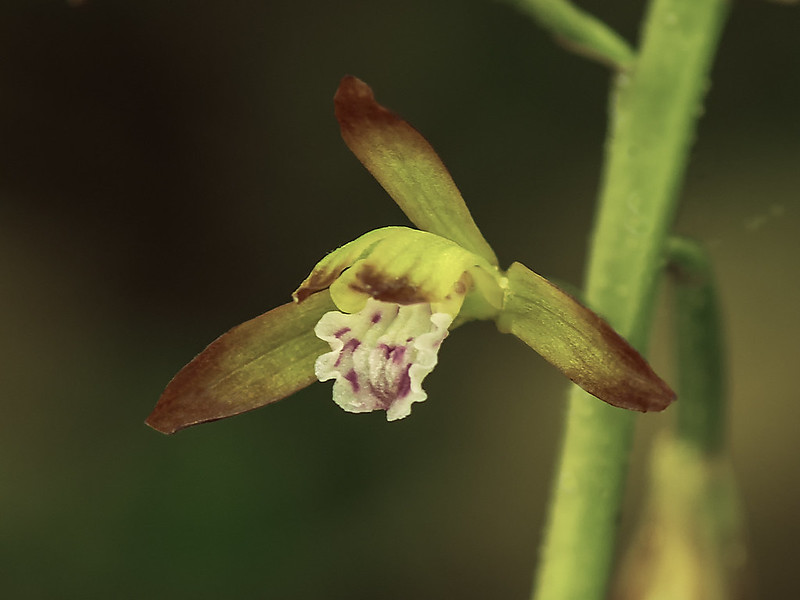 Just to give you an idea of the photographic challenges this orchid provides, here is a sample of images I took at different f/stops to show what effects that changing the f/stop on a camera can produce. In each image, there are three different flowering stems of the Puttyroot orchid. By selecting a particular f/stop, the depth-of-field is changed, varying from shallow (on a small slice of the image is in sharp focus) to deep (all subjects are [almost] in focus, including the background). Left to right, top to bottom, the f/stop varies from f/3.5, f/5.0, f/6.3, f/11, and f/20: 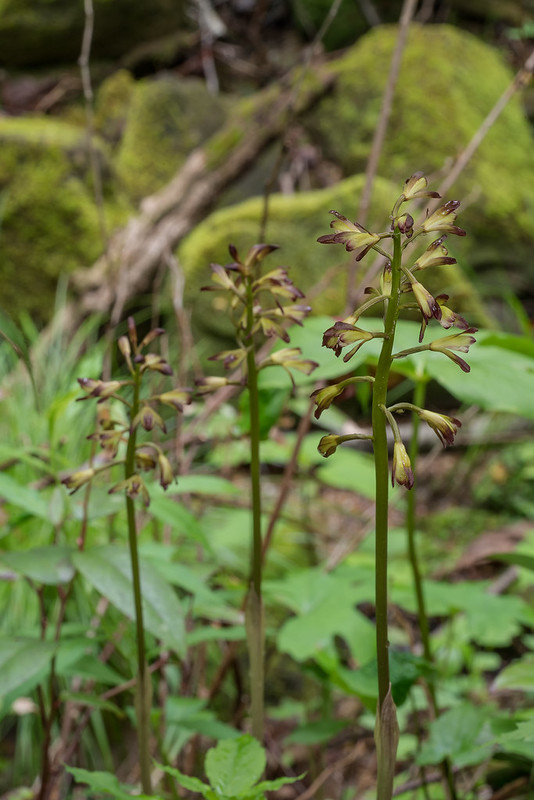 OK, why have I gone to the trouble to produce this and other “studies”? Folks, I’m learning just as you are in this process. For me, it’s a fun part of the total adventure, and my scant knowledge base is increasing. This is not intended to be a rigorous academic presentation, but an organized accumulation of facts and images that will hopefully lead to a further appreciation of things in our natural world. I may have gotten some things wrong, and if I did, please let me know in the comments section, below.

In our region of the Southern Appalachian Mountains, we are in the midst of the Spring wildflower season. One good thing about where I live is that if I miss something at lower elevations, there is a good chance that I can visit it later at a higher elevation. That’s the lure of the mountains, for me. Plus, there’s always something in bloom just around the corner.

I hope you have gotten some enjoyment from this post. As always, if you just want the “eye candy”, you can just skip over the geeky stuff — no problem. I don’t know what the future will be bringing as far as future photographic adventures. It’s a waiting game right now. But I have a glass-half-full attitude, and I am positive that better things will be coming…’