Platanthera grandiflora is the earlier of the two to bloom, usually, with about a week’s lead time. It is the rarest of the two in our region, and I feel quite lucky to know where to look for this species. Platanthera psycodes is quite plentiful on the access road to Mt. Mitchell, and the last week in June brings on the maximum bloom for this species.

So, let’s look at the differences between the two species. Some may say that they are subtle, but once you have a chance to study them up close, the two species are easy to differentiate. I like to think that only two characteristics are necessary to tell them apart: nectary opening shape and anther position and shape. Here is are a couple of examples which point out these differences: 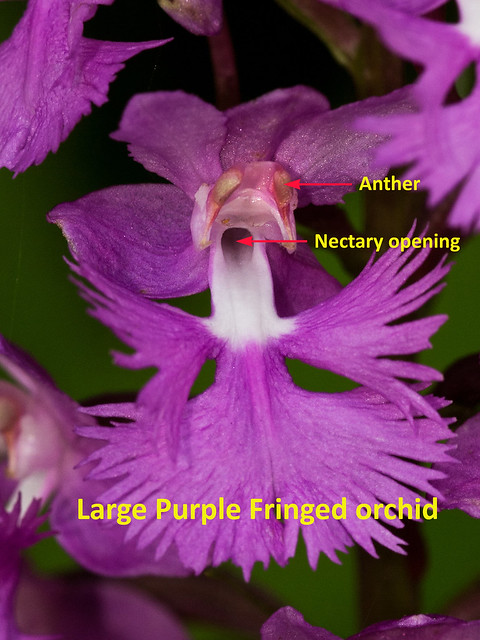 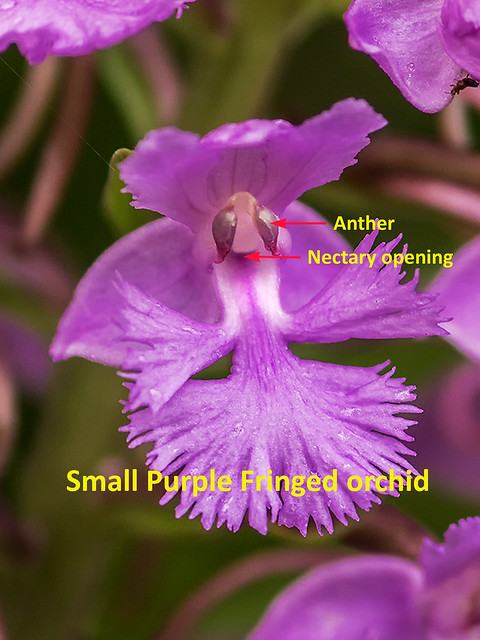 Large Purple Fringed orchid: nectary opening is round; anthers are larger and are spread farther apart

Small Purple Fringed orchid: nectary opening is flattened/pinched; anthers are smaller and are closer together

All other characteristics such as flower color, flower size and shape, are all quite variable and are not definitive as far as differentiating the species. Shaded flowers will sometimes be larger and spread farther apart on the stem — the plants being significantly taller. The flower color of both species will vary from pure white (rare) to dark, rosy purple. Pollination instances are interesting: According to a paper written in 2006, Identification and Comparison of the Pollinators for the Purple-fringed Orchids Platanthera psycodes and P. grandiflora, by John R. Evans, Department of Ecology and Evolutionary Biology at The University of Tennessee, the pollinators of both species include large butterflies, diurnal hawkmoths, as well as skippers. In several instances, Bombus (Bumblebee) species were seen to successfully pollinate Platanthera psycodes, while they actually disrupted pollination among Platanthera grandiflora.

Here is an image I took several years ago of an Epargyreus clarus or Silver-spotted Skipper pollinating a Small Purple Fringed orchid. Note the greenish pollinaria attached to its proboscis. Because it can only pick up 2 pollinaria from each flower, it is obvious that this critter has already visited many flowers. 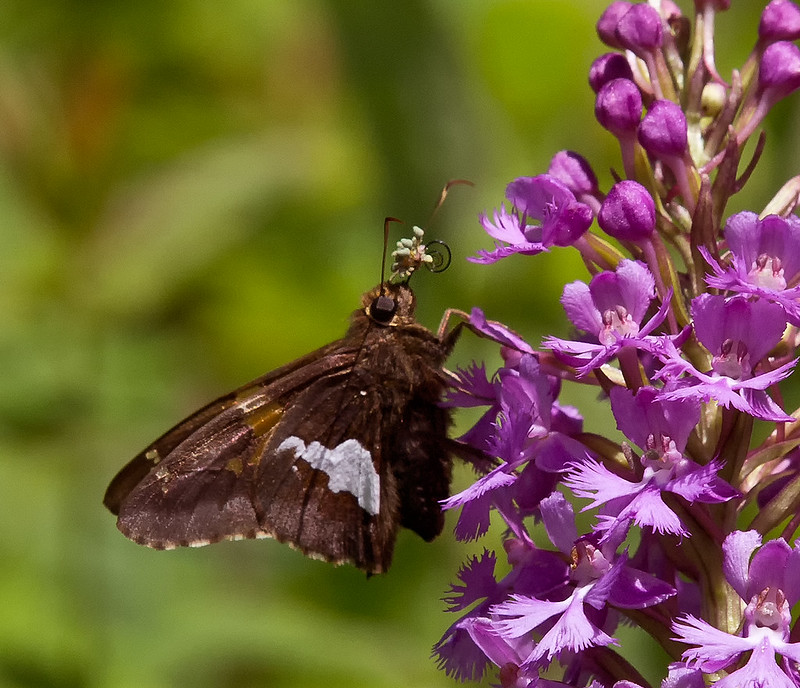 Our first stop was to a broad, grassy berm just next to the Parkway. Many years ago, a friend had told me that this spot was a well-known location for the Large Purple Fringed orchid. I have made annual visits to this site over the years, but I have only seen Large Purple Fringed orchids in bloom there on three occasions. It seems that the park service mowing crew has become overzealous in their mowing regime, taking the mower deeper and deeper off the road each year. A couple of years, I have seen plants clipped off just inches above the soil. This year, we found a single blooming plant, far off the road and almost into the woods. Here are a few images of this plant:

Here is a shot of Walter, set up in front of the plant, waiting for the clouds to cover the sun for better exposure: 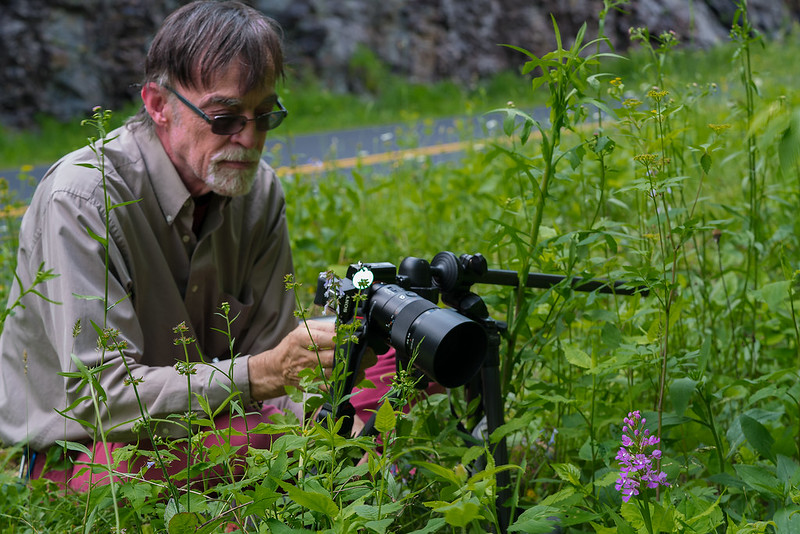 Although I was disappointed at not finding more plants at this site, at least we found one in pretty good shape.

So, we packed our gear and headed toward another site for this species. At this site, the plants are usually a bit larger with darker flowers. Again, it is within just a few feet of the edge of the Parkway, so I fear for its long-term survival. However, we did find 4 or 5 healthy plants at this site, but only one — the smallest one — was in bloom: 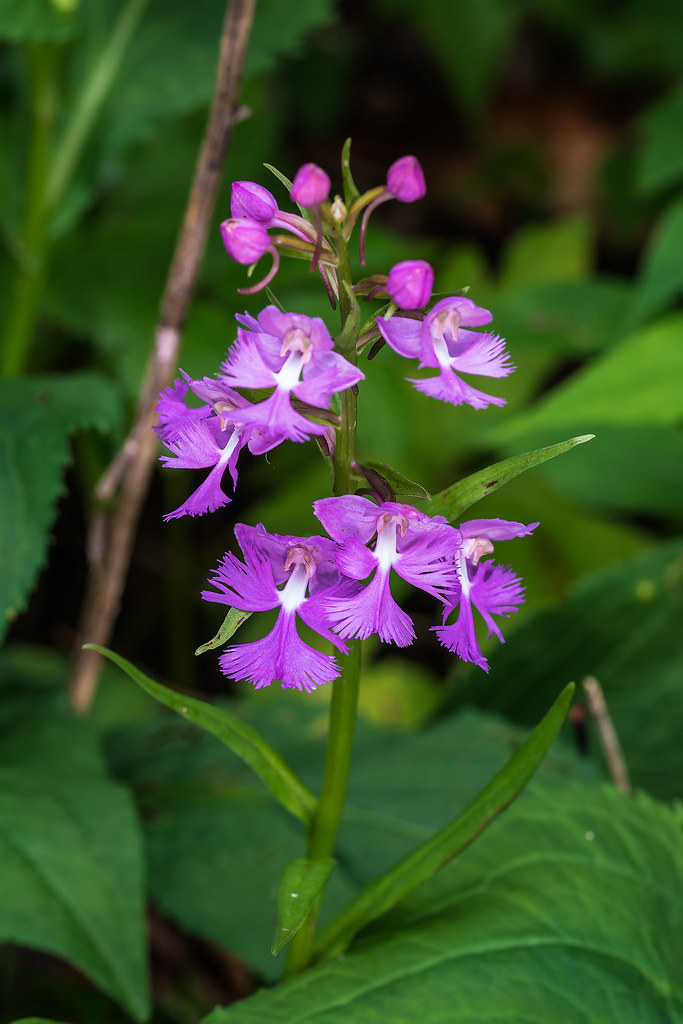 We found a few really robust plants which will be producing some nice flowers in another week or so. I hope to be able to revisit this site after the buds open, provided that the mowing crew doesn’t beat me to it:

There was a good deal of traffic on the Parkway during our visit, and I attributed that to the fact that people want to get out of the house during the pandemic, and the out-of-doors is a great way to spend your time. Also, it was the weekend, and weekends are always busy during the Summer on the Parkway — pandemic or no pandemic.

We finally reached the turnoff to Mt. Mitchell, but as we got closer, I saw a line of red highway cones at the entrance with a park ranger directing traffic — in this case, waving us off and pointing down the road to an overlook parking area, which, by this time, was packed with cars, campers, and motorcycles. Oh NO! Mt. Mitchell is closed!!! We managed to find a narrow parking space, so I parked there, and asked the guy parked next to me what was going on. He said that the ranger was letting only 20 cars in at a time, and we would just have to wait a while. Well, we had driven 2 hours to get there, and a few minutes wait would not be too much to ask.

After about 30 minutes, there seemed to be some frantic activity at the front of the line, so we got back in to my truck and prepared to vacate the parking lot. Sure enough, the front of the line began moving toward the entrance to Mt. Mitchell State Park. In a few minutes, we were on the access road, looking for the Small Purple Fringed orchids that are so plentiful along the roadside ditches. But, we did not see a single one! We were too early by about a week. I guess I should have figured that out, because the Large Purple Fringed orchids are a week ahead in their bloom schedule, and the ones we had seen an hour earlier had just begun to bloom. But, persistence paid off, and I found a single specimen in bloom. It was not the largest nor was it the prettiest specimen of the Small Purple Fringed orchid I’d seen up there, but it was in bloom: 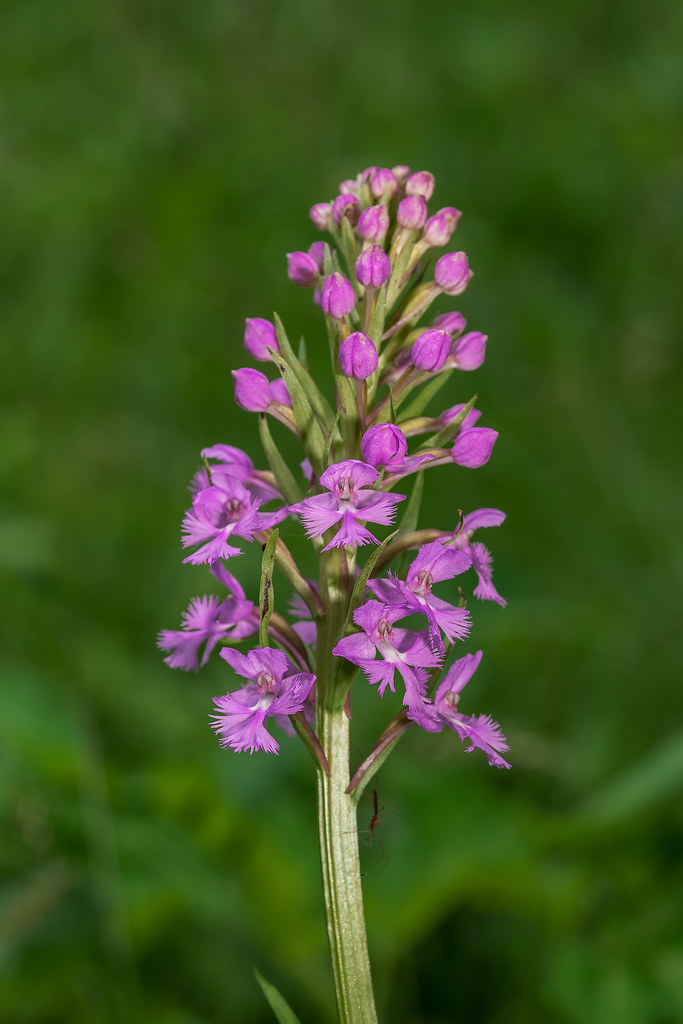 We saw many of them in spike, so 7 days should bring on a good showing: 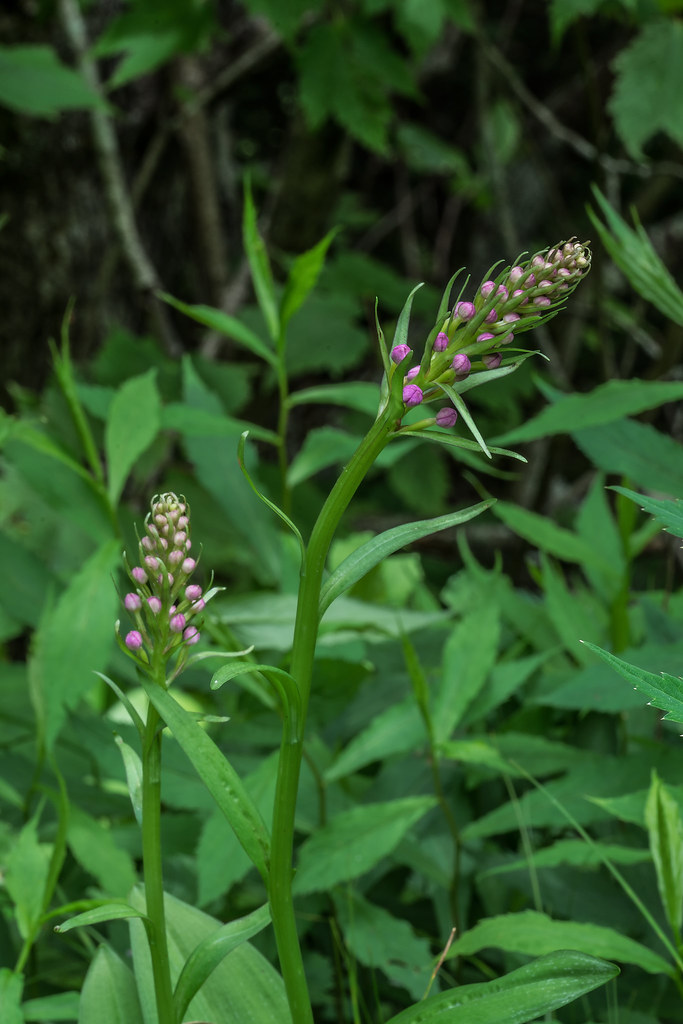 While up there, we saw a number of Rhododendron catawbiense or Catawba Rhododendron, which grows only at high altitude in the Southern Appalachian Mountains. It was at its peak flowering, so I decided to get a few shots: 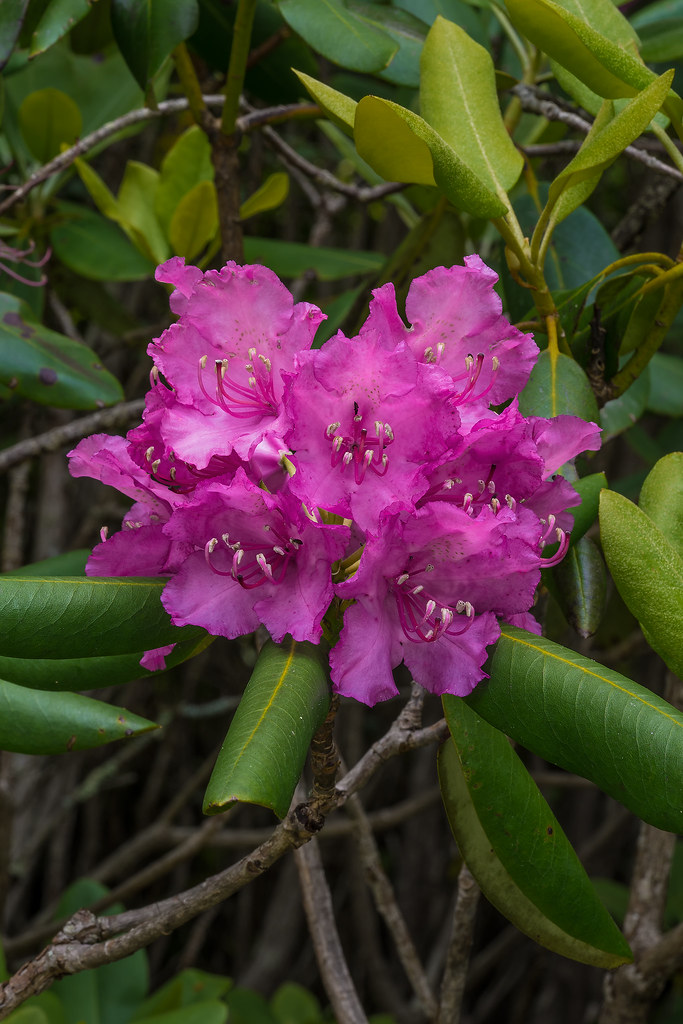 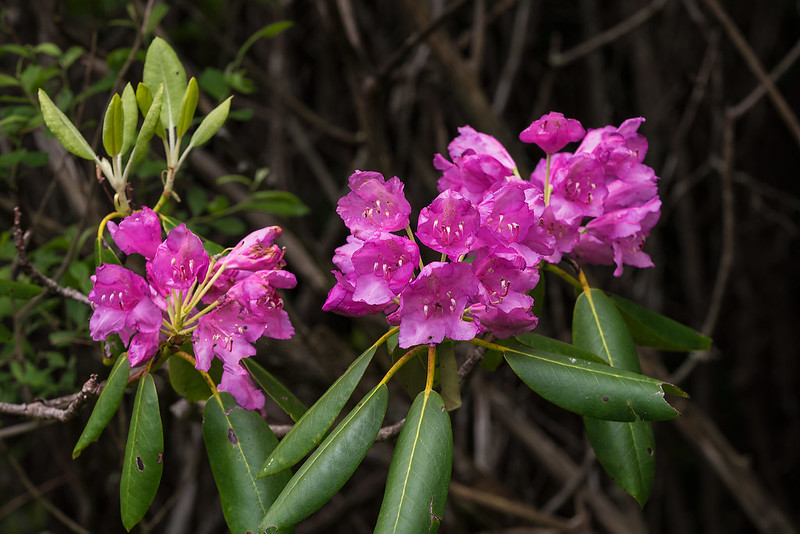 We finished up at Mt. Mitchell early, so we decided to head back down the Parkway to see what other wildflowers we could locate. On our way back to where we had seen the Large Purple Fringed orchids, I spotted a bit of purple out of the corner of my eye, so I had to drive on a bit to find a place to pull off the road. We gathered our gear and headed back down to where I had spotted the purple, and there were several Small Purple Fringed orchids just getting started: 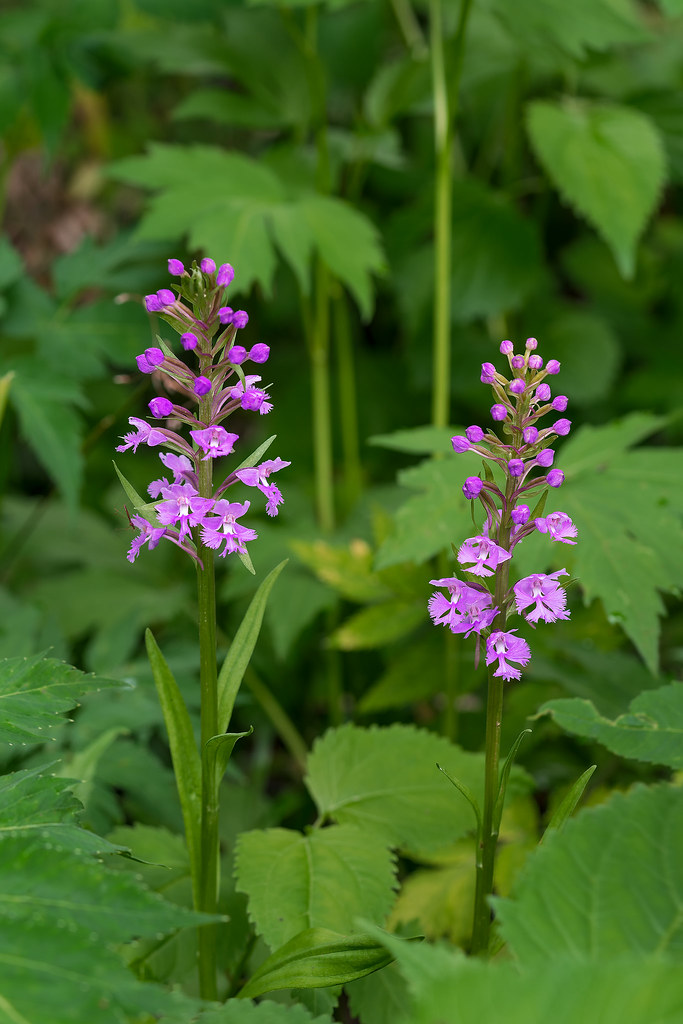 Well, that was a treat!

We finished up, packed our gear, and headed back toward home. About 20 minutes later, I spotted some bright red flowers along the roadside, so I found a spot to pull off, and I parked the truck. We gathered our gear and headed back up the road to where I had seen the flowers. These were the beautiful, Aquilegia canadensis or Eastern red Columbine, in glorious bloom! There were several large clumps of these plants along the road, so we set up to take some pictures. Here is what we got: 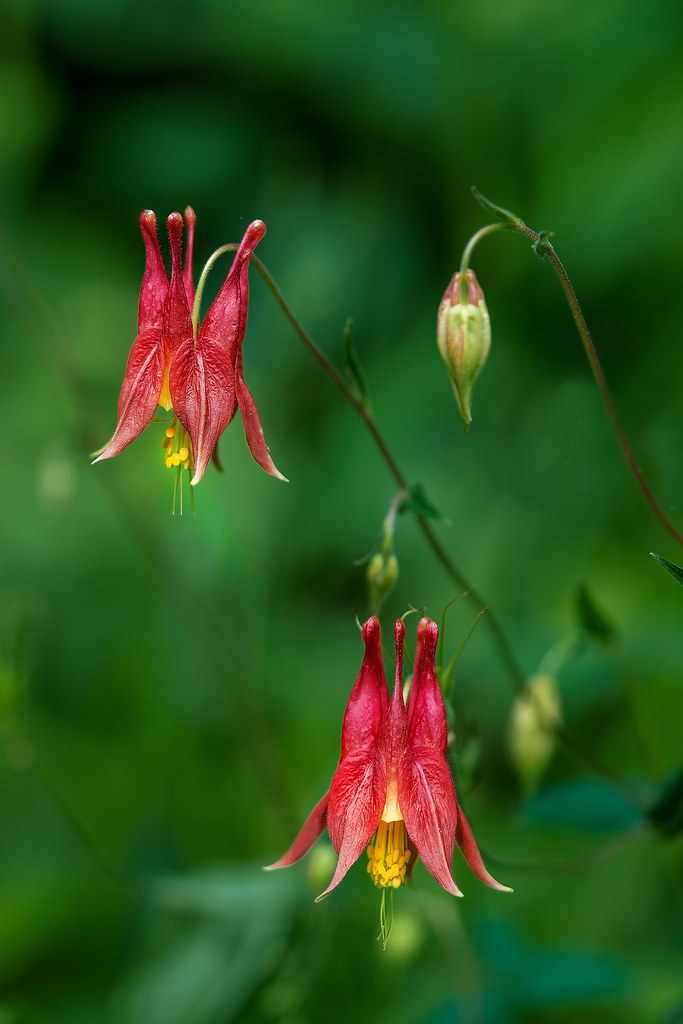 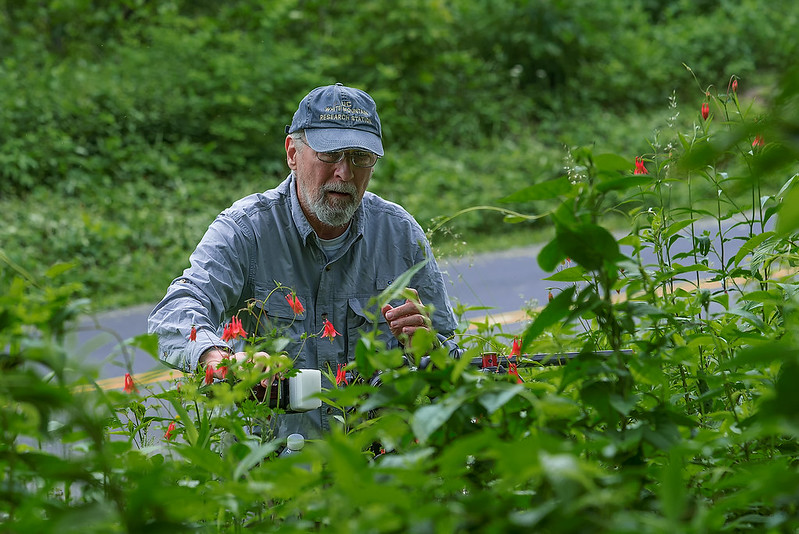 Here’s the shot I got: 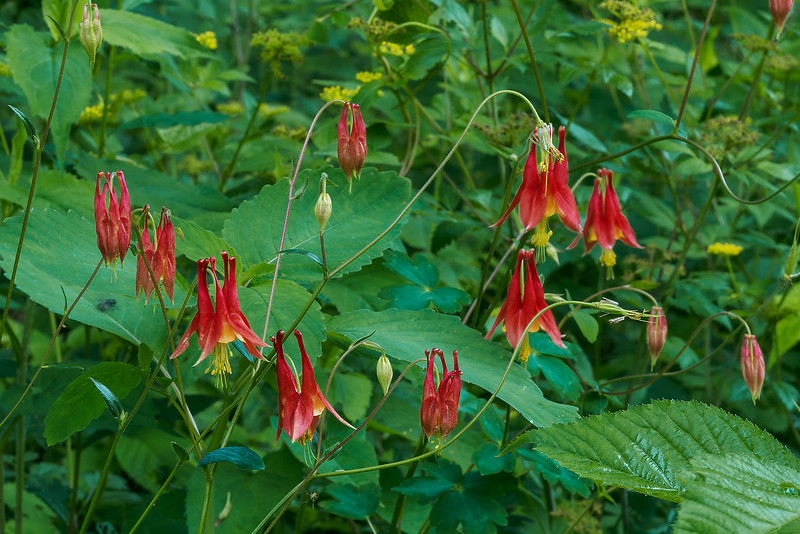 We headed farther down the road and began to see lots of color along the steep hillsides. These were the yellow and orange flowers of another Rhododendron — Rhododendron calendulaceum or Flame Azalea. It can be found in colors ranging from pure, lemon yellow to deep, reddish orange and all colors in between: 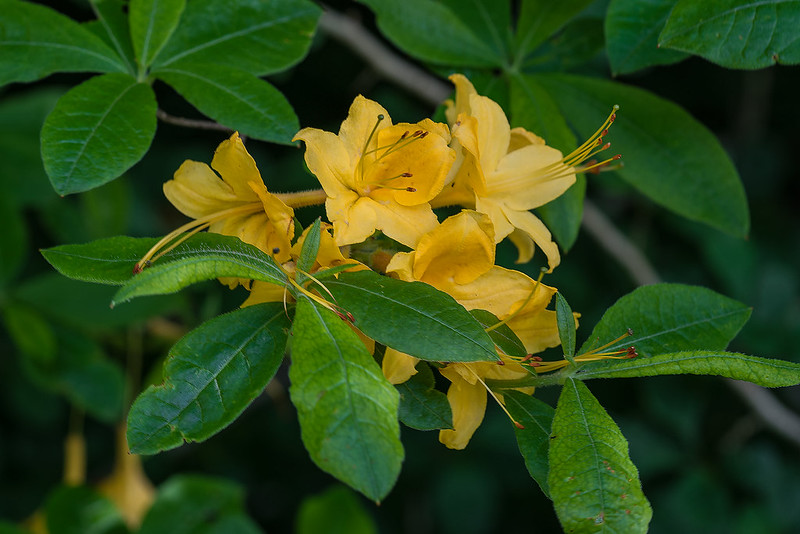 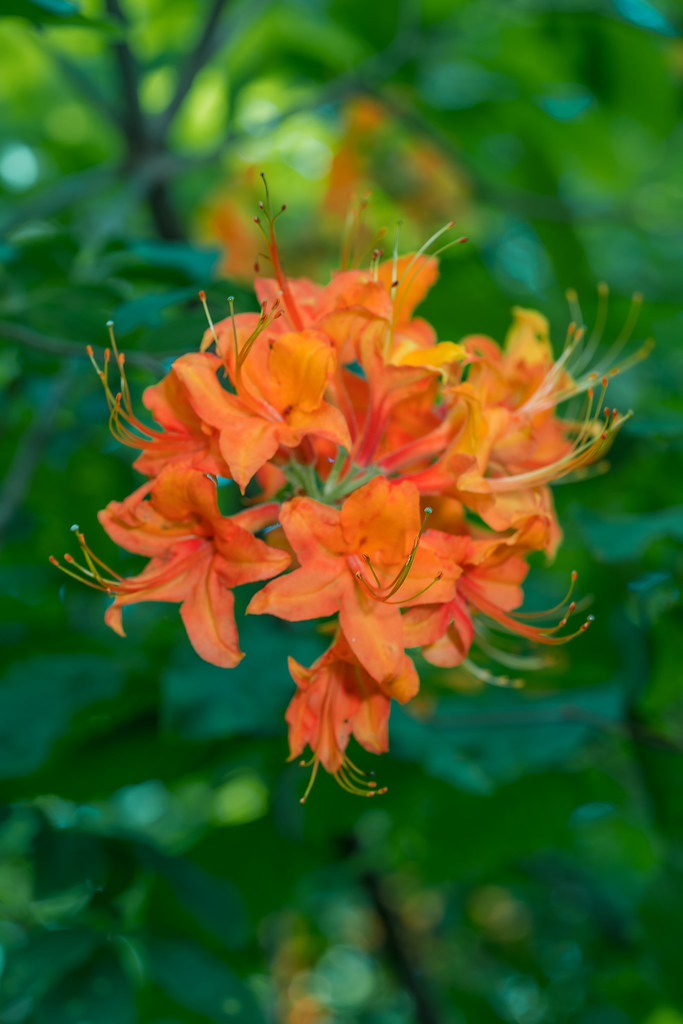 Nearby, the large shrubs of Kalmia latifolia or Mountain Laurel were also in full bloom: 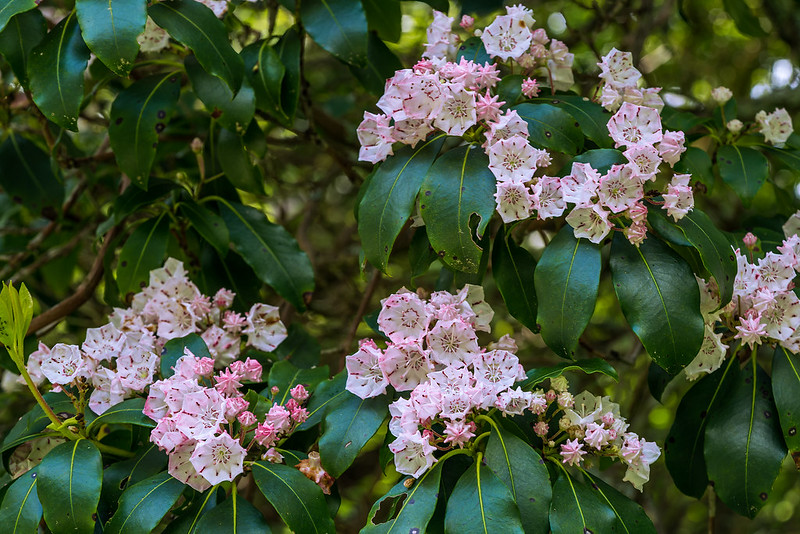 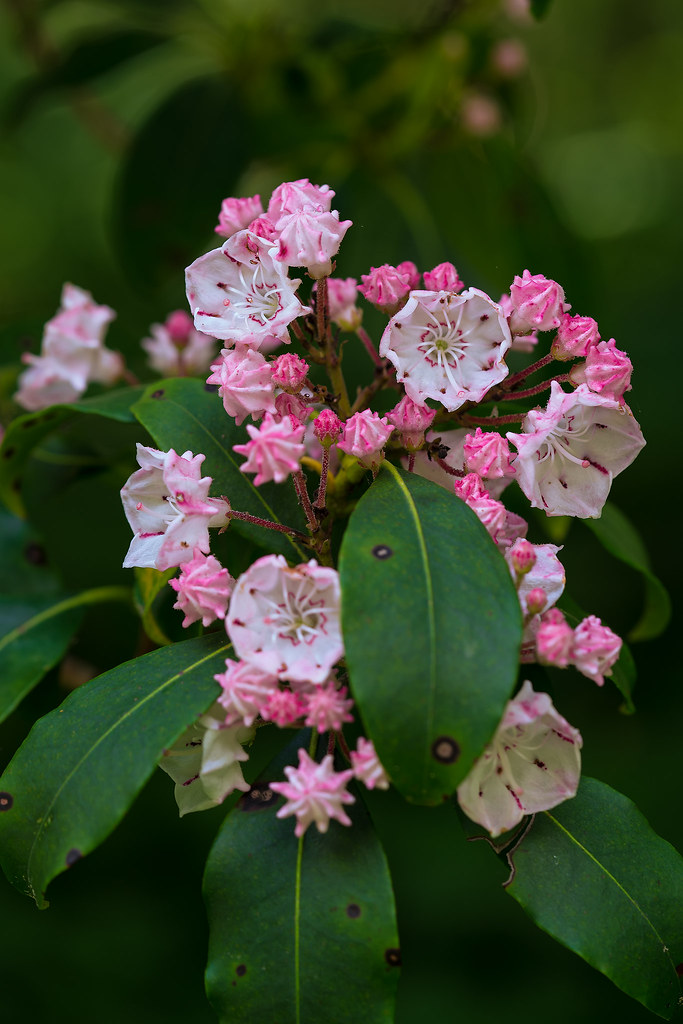 Here is a side-by-side, Mountain Laurel and Flame Azalea, both about 20 feet (6 meters) tall: 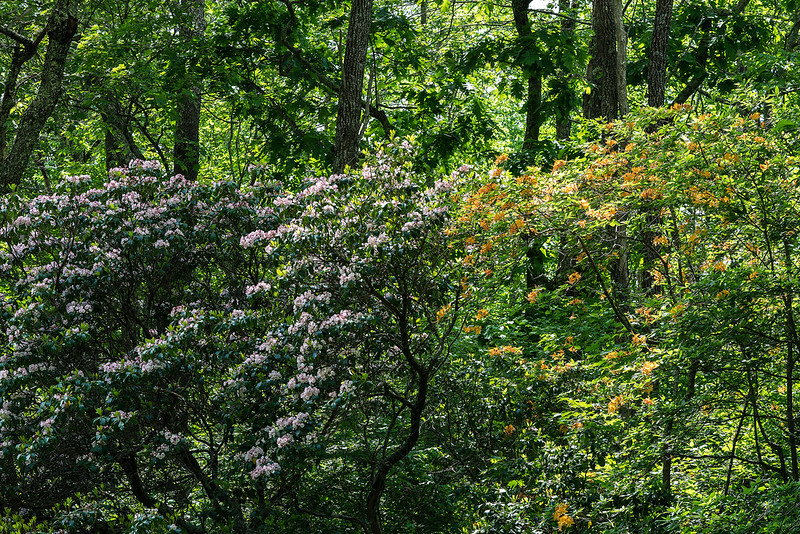 What a wonderful way to spend a day! I’m lucky that my outside interests are those which do not require me to be in close contact with people. I’m also lucky to live in an area which provides me access to such a wonder array of wildflowers. The Blue Ridge Parkway is a wonderful place to visit even if you are not deeply interested in botany or biology. The scenic views are unparalleled, in my opinion, if you’re looking for green mountains and valleys. The speed limit is only 45 mph (72 kph), and it is enforced. But, taking your time to enjoy the sights is what it’s all about, right?

As I wrote earlier, I hope to get back to the orchids in a week or so. My son is currently driving down from North Dakota for an extended visit, and he’s interested in mountain climbing. I hope I can interest him in exploring some of the 6000-foot (1800+ meter) peaks in the area during his visit.