In order to facilitate the monthly resupply of our Elk Park, North Carolina mountain cabin for Airbnb guests, Walter Ezell and I usually make a two or three day trip and spend a bit of spare time hiking or driving along the Blue Ridge Parkway. On June 29, this trip coincided with the bloom time for Liparis loeselii or Loesel’s Twayblade orchid.

I was made aware of this population of orchids four years ago after seeing the images taken by my photographer friend, Meng Zhang. She is an excellent photographer, and she was willing and able to share the location of these unusual orchid plants with me.

Each year, I attempt to make it to this location where, in past years, there have been many dozens of blooming plants. For the past couple of years, this roadside location has become overgrown with Rhododendron maximum or Rosebay Rhododendron and some other weedy species, and this year, the plants were almost completely shaded over. There is a fine line between too much mowing, and too little mowing, and I commiserate with the mowing crews of the Park Service. I mentioned in my previous blog the instances that we saw of too much roadside mowing or mowing at the “wrong” time of the year. There is another story farther down in this blog report about trail management, but these mishaps of plant destruction are all due to lack of knowledge about where certain plants grow. In any case, we did find about a dozen blooming orchids at this site, and they were in pretty good shape. Here is an example of Loesel’s Twayblade orchid: 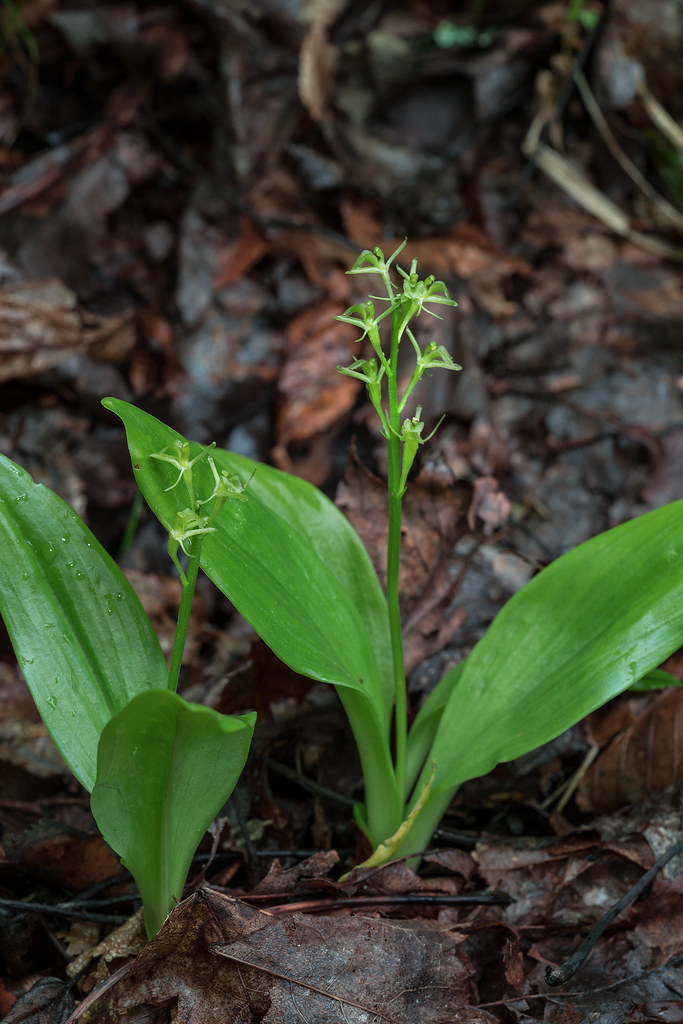 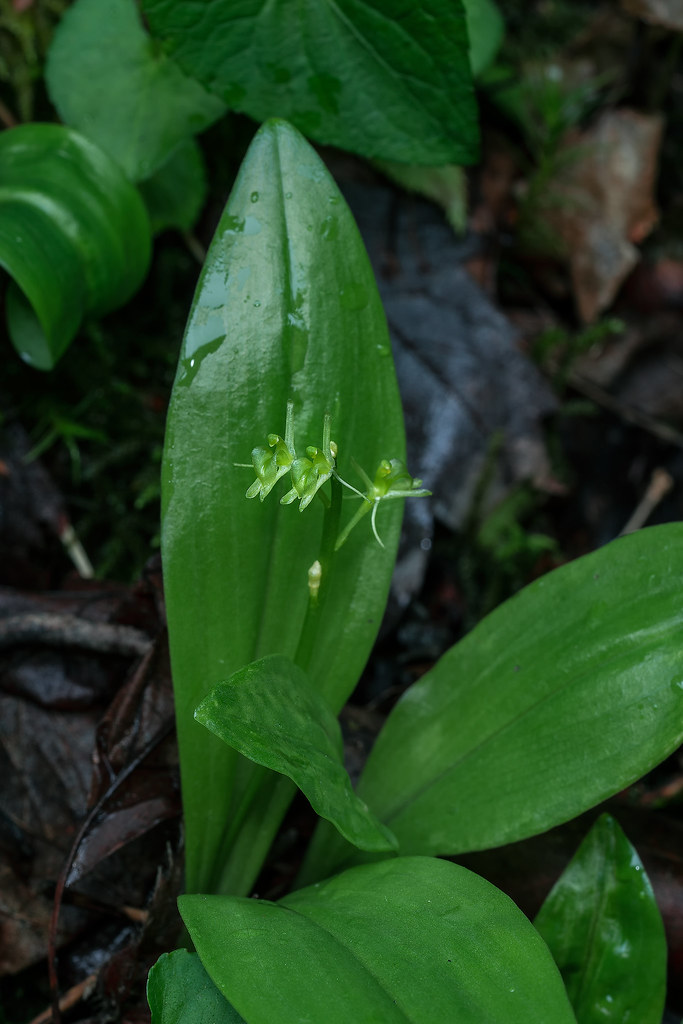 Here is a close-up of the flowers in the previous image: 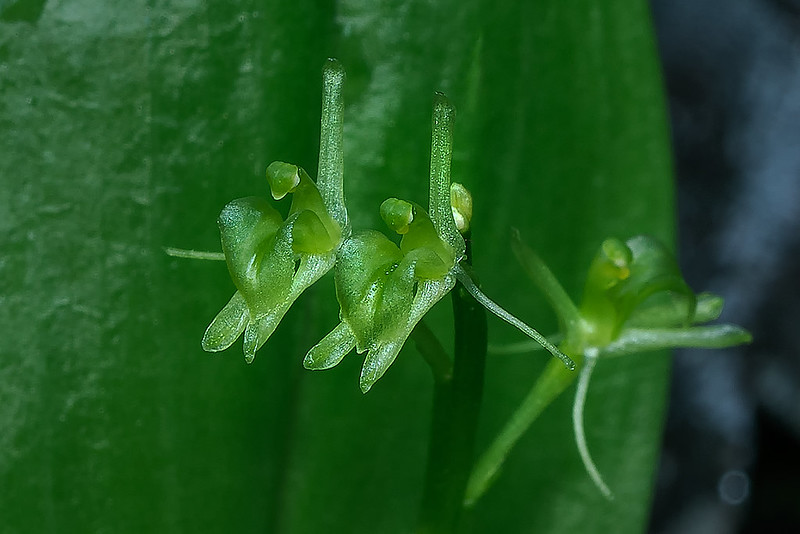 This is another one of those orchid species which is generally found farther north. But, the site for these particular plants on the Blue Ridge Parkway is at about 5,000 feet (1,525 meters), and that provides it much the same temperature, rainfall, and light conditions of its preferred northern habitat.

An interesting thing about this species is that it is autogamous or self-pollinating. What happens is that the ripe pollen sac (male portion of the reproductive structure) will dislodge from its cradle on the column of the orchid flower, and it will fall onto the stigma (female portion of the reproductive structure), thus completing the fertilization process. This is often facilitated by rain drops. When we see the previous year’s seed capsules, they almost always represent each of the flowers that bloomed on the stem — not always 100%, but near to it. Here is an image which shows last year’s seed capsules, now empty, behind this year’s blooming plant: 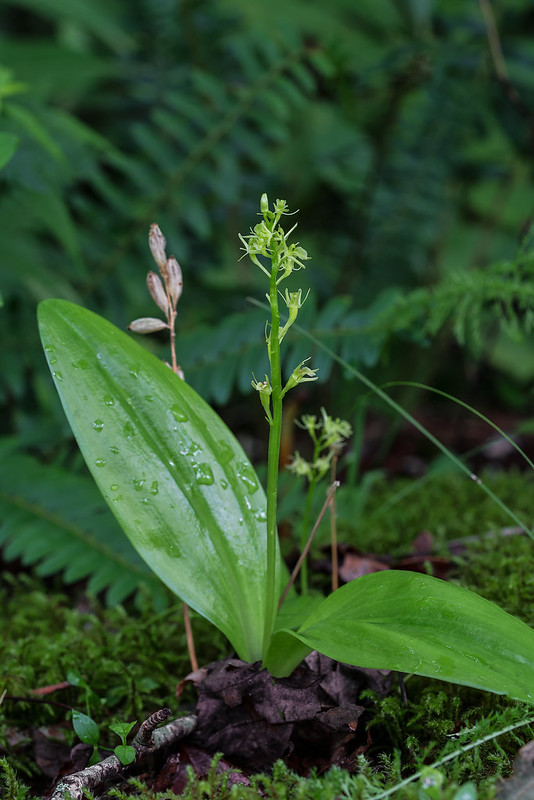 Here is a selection of the rest of the images we made while at this site:

After finishing up at this site, we checked the weather which threatened rain, and we decided to try to visit a site where I had seen Platanthera orbiculata or Pad-leaf orchid in past years. Last year, I was unable to visit the site because the main trail bridge had been washed out, and the trail had been closed by the Park Service. This site is one of the farthest south for this orchid species, being another one of those orchids which is found much farther north.

We arrived at the parking lot and saw that it was almost full. This hiking trail is very popular and I fully expected to see a lot of people. We gathered our gear and hit the trail. Along the trail, we were seeing many large Rhododendron maximum or Rosebay Rhododendron within arm’s reach. In places, they were so large that they formed an arch over the trail making for a beautiful hike. From time to time, I would check under the low-hanging branches for Neottia smallii or Appalachian Twayblade orchid aka Kidney-leaf Twayblade orchid. As I have mentioned in the past, I believe it is a rather common orchid species, but is not frequently seen because it is usually hidden deep under the low-hanging Rhododendron branches.

At one point, I spotted about a dozen nice specimens in full bloom. Here are some shots of these specimens:

After a while, I quit looking for them because I was seeing so many. Again, fairly common, at least in the Southern Appalachian Mountains.

Farther up the trail, we spotted a young man taking notes at a large boulder. We struck up a conversation and found out he is a summer intern with the National Park Service. He was doing a walk-through, checking on the need for trail maintenance. He pointed out what he was looking at, and asked if we wanted to photograph it. This is an immature version of Notophthalmus viridescens known as a Red Eft. The striking color of this young newt fades to a dull greenish-brown when it matures, but in this stage, it is definitely photographable. 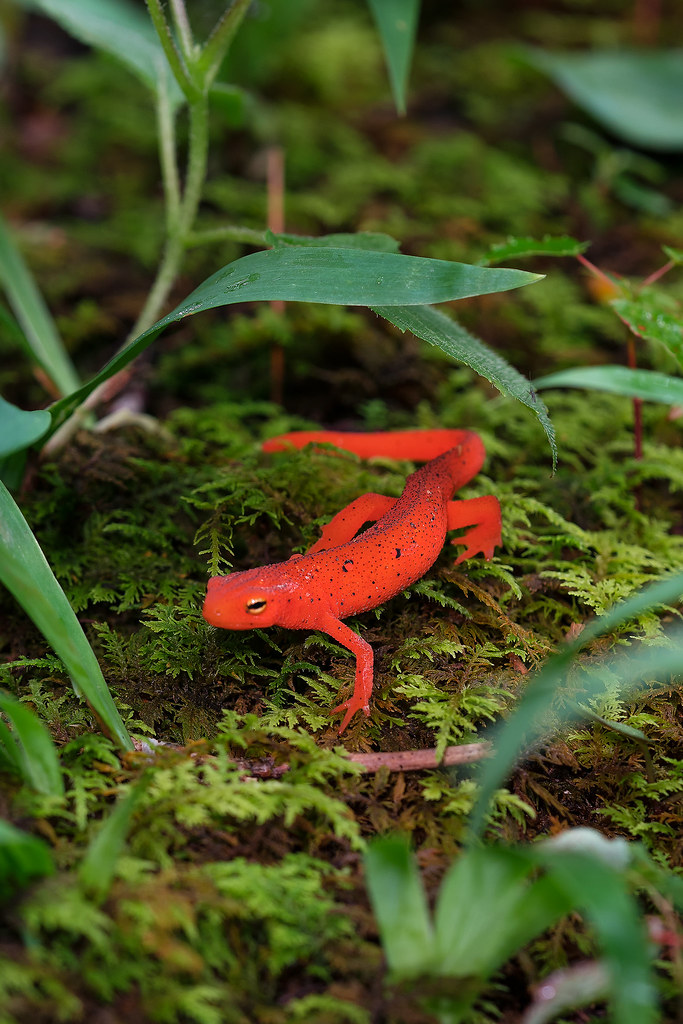 We spoke about how trail maintenance is sometimes at odds with orchid conservation, and I pointed out how many of the trimmings of the Rhododendron had been cast aside on the edge of the trail. I also asked him to follow us up the trail just a short distance to check out the Pad-leaf orchid plants. He seemed eager to learn more about the orchids in the area, especially this one which was new to him.

We soon arrived at the spot where I have photographed the orchids in the past, and I was shocked to find a large pile of Rhododendron branches piled directly on the area where I had expected to see the plants. I explained the problem, and he helped us move the branches farther away. There were no orchid plants showing under the pile of branches, but we did find one lone plant a few feet away from the edge of the pile. But it was not a blooming plant — just the large leaves: 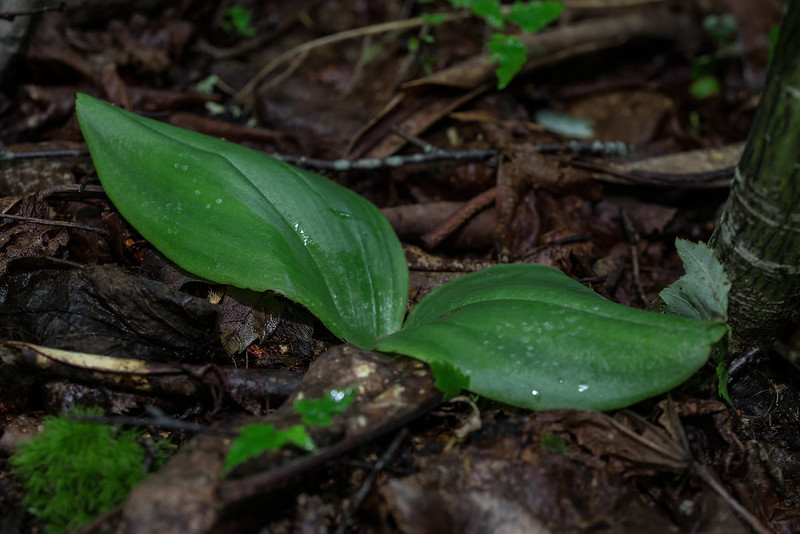 Here is one of the plants from a couple of years ago: 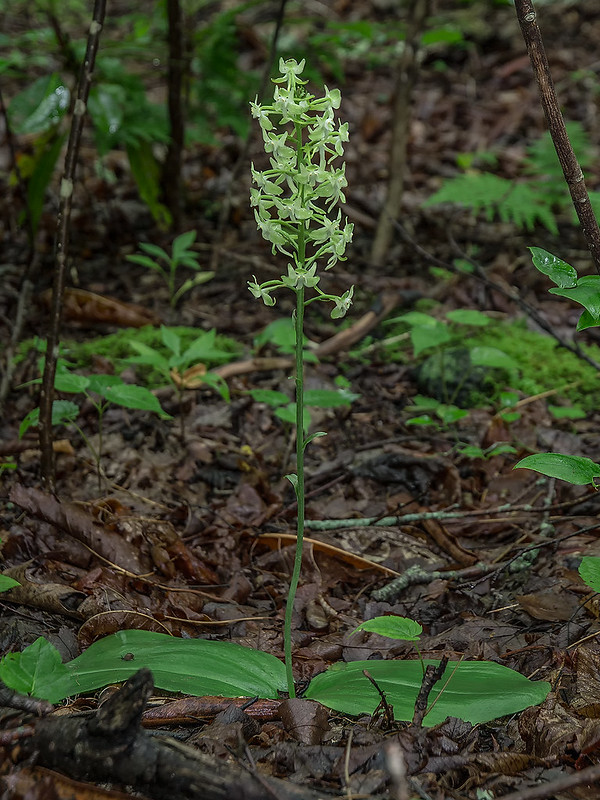 At least we found one plant in pretty good shape, but it is not a good sign for future growth of the other plants. Only time will tell…

Having struck out at this site, we said our good-byes and headed back down the trail to the truck. Once there, we packed our gear and decided to head farther north just to see what else was blooming along the Parkway. Just a short distance up the road, we stopped at an overlook after passing by some colorful wildflowers. We gathered our gear and walked back down just a short distance. The shoulder of the road was decorated with hundreds of Prunella vulgaris known as Heal-all aka Self Heal. The plants are only a few inches tall, but up close, the flowers look like they could be orchids.

According to commonwealthherbs.com, “Self Heal, Prunella vulgaris, is one of those plants that seems able to do everything. Writing in the 16th century, Gerard said that no herb equals Self Heal for healing wounds, and a whole host of other things. Self Heal is used all over the world – by Native Americans, Europeans, and all across Asia, for things as varied as thyroid problems to conjunctivitis to tuberculosis to arthritis to cancer. Which sounds absurd, or at least exaggerated, right? Except, Self Heal is one of the more widely studied herbs and even in scientific studies, you see these broad lists of conditions where Self Heal has been helpful – as an anti-inflammatory painkiller, for gingivitis, for osteoarthritis, HIV, herpes, diabetes, high blood pressure, even tubuerculosis, liver cancer, and endometriosis! And to top it all off, amnesia and dementia?? What is going on? When even scientific studies come back with such a wide range of seemingly unrelated issues, clearly there’s something amazing about this plant!”

Farther back from the shoulder of the road, the unmowed portion of the edge of the woods provided excellent habitat for one of the reddest wildflowers imaginable — Silene virginica or Fire Pink. This year, especially, the flowers of this cousin of the domesticated Carnation seemed to be larger and deeper in color. This is probably due to the quantity of rainfall so far this year. They really appear to be thriving on the roadside: 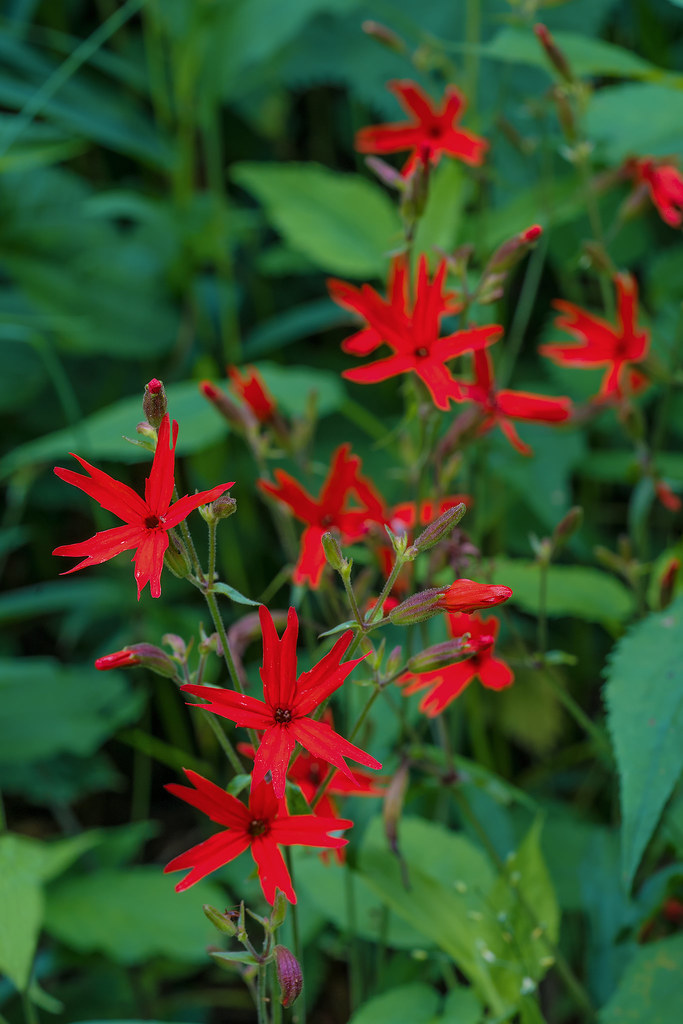 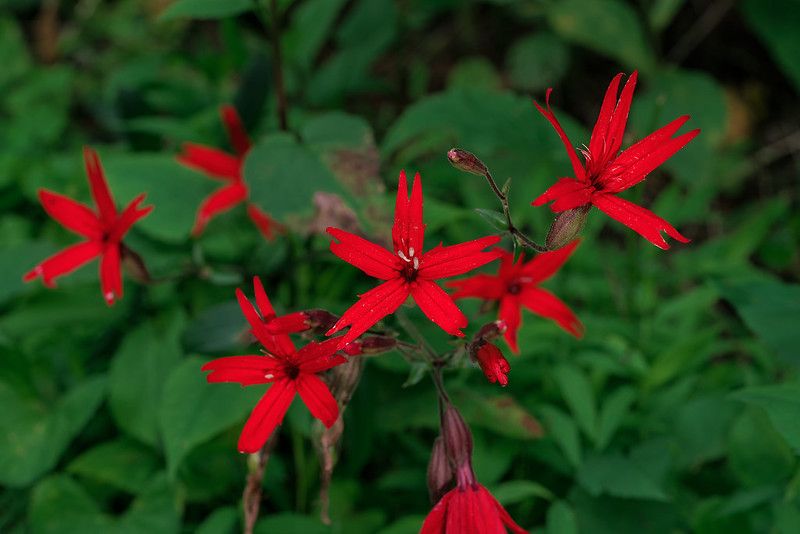 Back even farther, and just into the woods, we found one of the most unusually colored Rhododendron calendulaceum or Flame Azalea shrubs I’ve ever seen. It was a peachy-orangey-pink, very unusual even for this variably colored species: 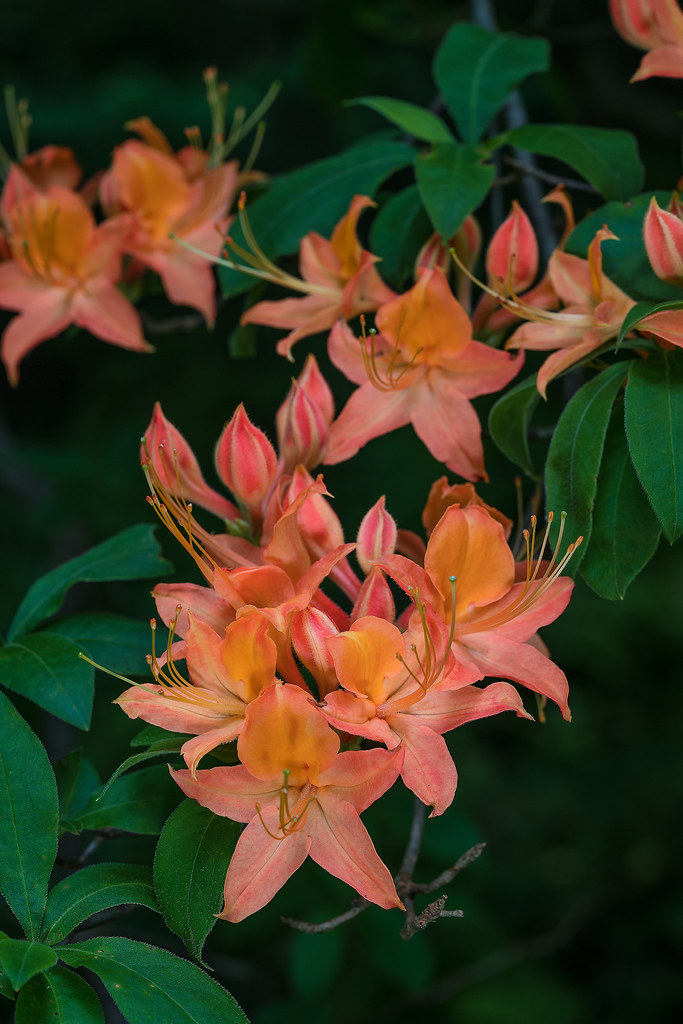 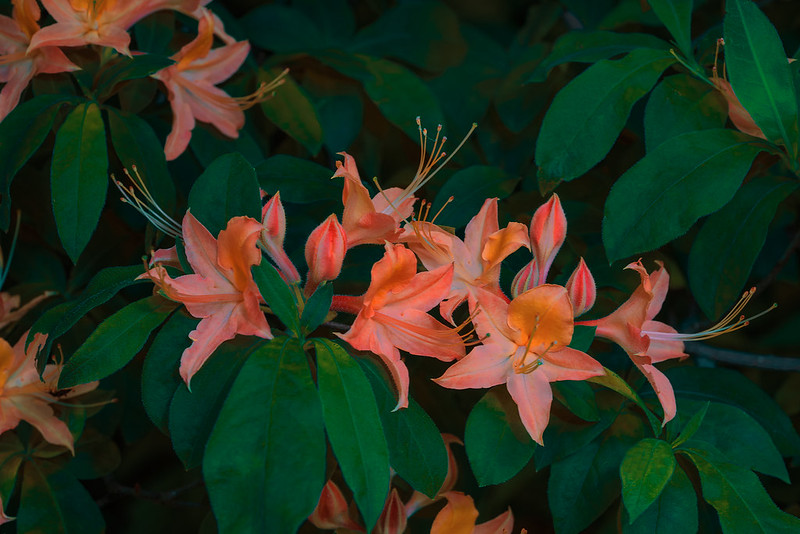 What a spectacular wildflower!

By now, it was beginning to sprinkle rain, so we decided to pack it up and head back to the cabin. After leaving the Parkway, we were driving on the main road back to Newland, North Carolina, the county seat for Avery County. I remembered a roadside ditch where I had seen some blue flowers lining the ditch last year. I had not stopped then, but decided not to pass up the opportunity if I was able to see them again. Sure enough, I spotted the “blue ditch”. After finding a place to pull of the road, we gathered our gear and walked back to the location.

What I thought might be a species I had not photographed before, they turned out to be a naturalized population of Myosotis scorpioides or Forget-me-not flowers. 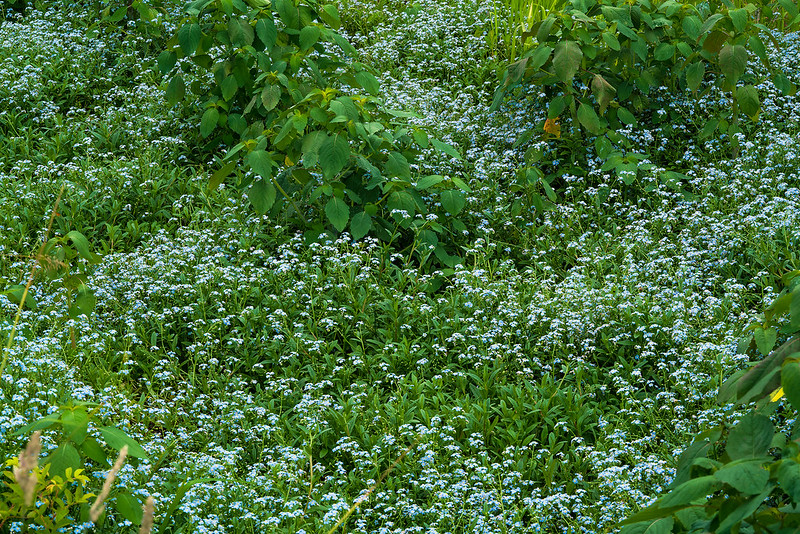 This image really does not do justice to the 50-yard (~50-meter) length of ditch that was completely covered by these blooming plants! And the delightful floral fragrance was almost overwhelming! But getting close enough to the plants was a challenge, because the ditch was full of water, and approaching the edge of the ditch, I managed to get my feet thoroughly wet. No pain; no gain, I guess…

Somewhere along the way, these plants escaped cultivation and found a preferred spot to grow. What a surprise to find them. Here are some close-up images of these beauties: 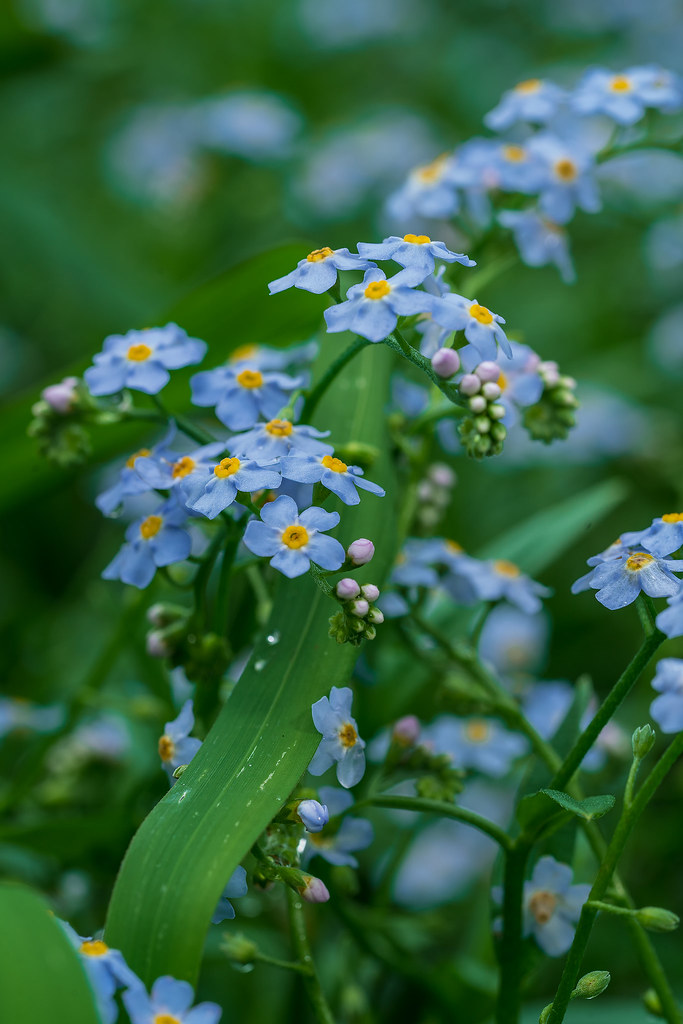 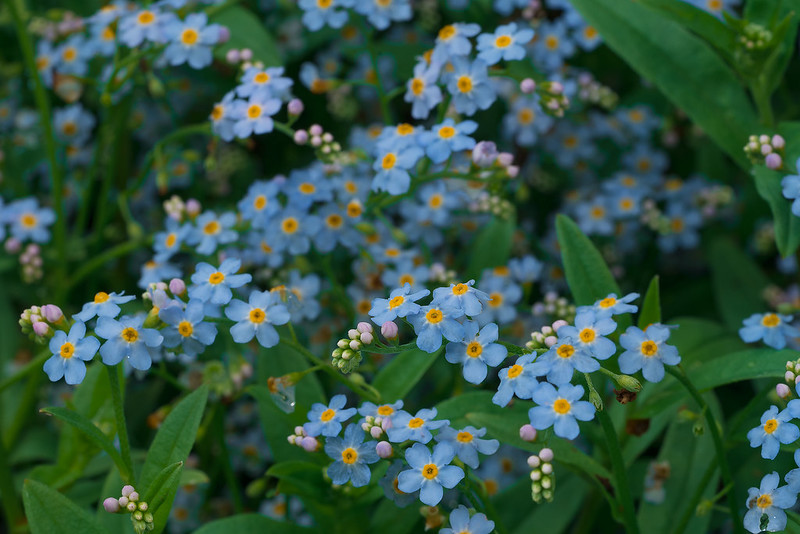 Although we struck out with the Pad-leaf orchids, this turned out to be a pretty good day for botanizing.

This portion of North Carolina holds a great deal of wildflower diversity, especially that seen along the Blue Ridge Parkway. Travelling this scenic by-way, offers hiking trails, waterfalls, grand landscapes, rich fall color, and much more. I am constantly amazed at the sheer rock walls that were carved in order to put through this highway in the 1930s. These same wet cliff faces host a multitude of rare and beautiful plants — many photographic opportunities just from the edge of the road.

Much of this work was done by hand by CCC (Civilian Conservation Corps), ERA (Emergency Relief Administration), and WPA (Works Progress Administration ) workers who did their job for very little pay in order to be able to provide for their families during those difficult financial times brought on by the Great Depression. Thanks to their hard work, we are now able to drive through some of the most botanically land in the nation.

By the end of this month (July), I hope to bring to you several mid-Summer orchid species and other colorful wildflowers — all found within North Carolina’s Pisgah National Forest, which is transected by the Blue Ridge Parkway. Time for me to make some plans…