The end of September always provides some awesome wildflowers, especially along the roadsides of the Blue Ridge Parkway in western North Carolina. As the title of this blog post indicates, these wildflowers are Gentians and Ladies-tresses orchids. The first foray for these beauties was made during a re-supply trip to our mountain cabin on September 23. We had considerable amount of work to do to winterize the cabin and ready it for fall guests. During this trip, I had set aside a morning for the 20-mile (32-km) trip to the Blue Ridge Parkway. Being so close to this wonderful wildflower location is definitely a plus, and I usually set aside some time to visit when we are at the cabin.

Once arriving at the Parkway entrance, I immediately began to see some delicate Spiranthes cernua or Nodding Ladies’-tresses orchid along the previously mowed roadside. During this brief foray, there was not a single mile that I drove that did not provide roadside Spiranthes and Gentiana species. 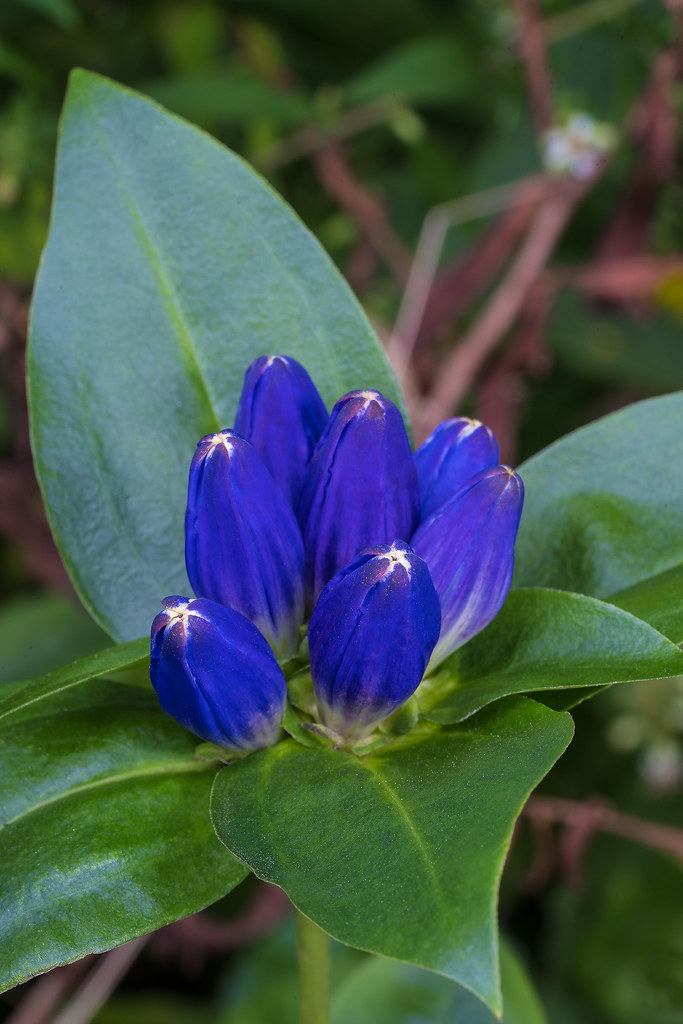 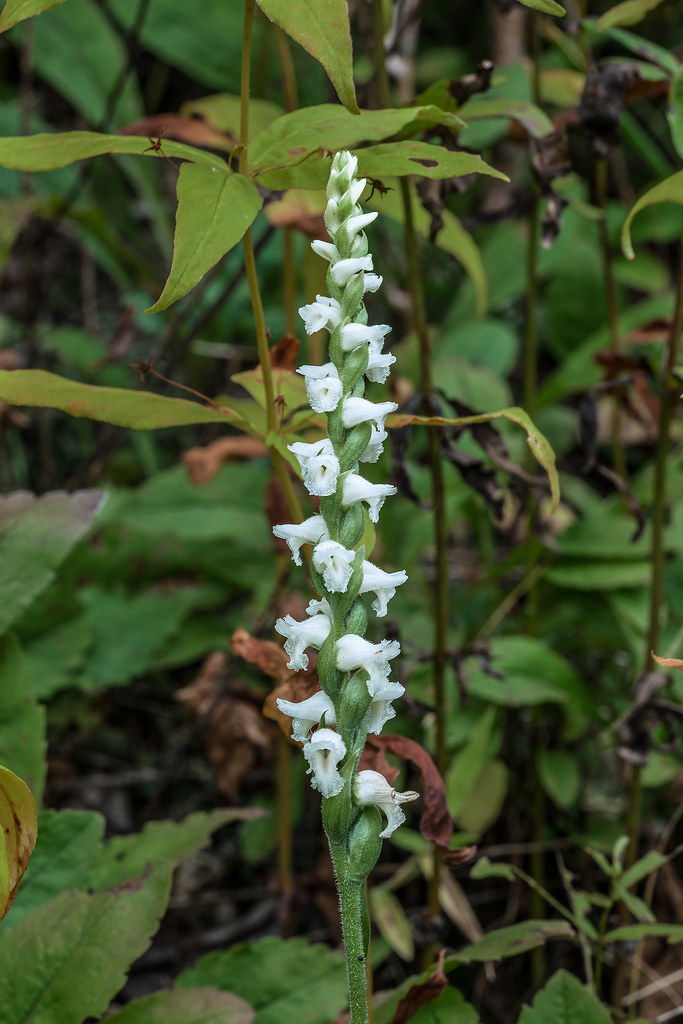 The first location I wanted to check out was one that my friend, John Neal had told me about a while back. He said that there were some Gentian species near the road and close to a specific overlook on the Parkway. I had never seen any Gentians there during my previous visits, so I wanted to check them out. The plants were fairly easy to find, and they were in great shape. Turns out, they were Gentiana austromontana or Appalachian Gentian — a species of Gentian that can be found at higher elevations. The first image, above, is one of this species. Here is another: 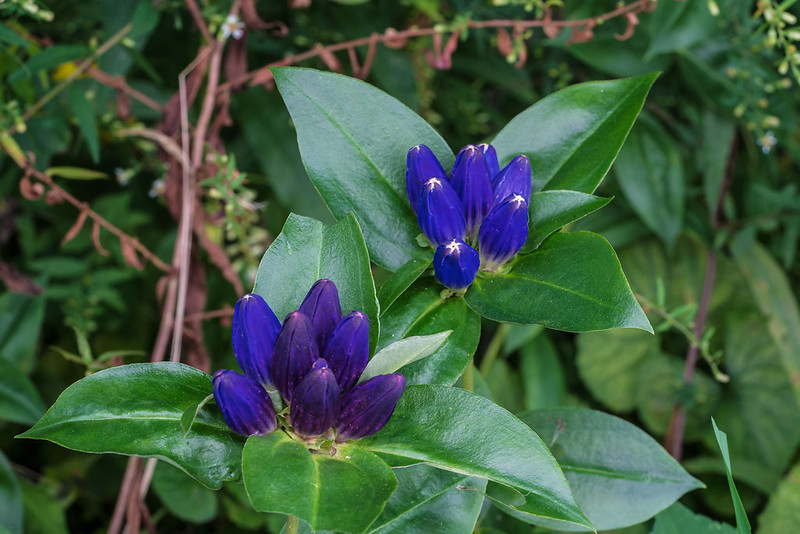 These flowers were especially dark, royal blue, because they were growing in the shade of the limbs of a small tree. One of the reasons I like these mountain Gentians so much is because of the deep, rich blue color they exhibit.

The next spot I wanted to visit was the parking area of the Linn Cove Viaduct Visitor Center. Here, I’ve found a number of Appalachian Gentians as well as some Spiranthes cernua or Nodding Ladies’-tresses orchids. When I arrived at the gate at the entrance to the driveway, it was closed! Bummer! But… there was no signage that indicated I was not allowed to enter on foot. So that’s what I did. As I walked down the paved driveway, I immediately noticed a few white spires to my left, on the hillside. These were some of the best Nodding Ladies’-tresses orchids I would find on this trip. I scrambled up the hillside and set up my camera gear. Here is what I saw:

The second image at the top of this blog post is included in this group.

As I moved down the driveway toward the parking area, I began to notice Gentians on the hillside, but I knew that the ones in the parking area median would be much nicer. I arrived at the median, and sure enough, there were dozens of Appalachian Gentians in full bloom. The ones that were in the shade were considerably darker than the ones along the edge of the median, in sunlight. Here is a sample of these Appalachian Gentians:

The basic distinguishing factor to differentiate this Gentian species from other similar ones found at higher elevations is the presence of very small hairs on the calyx and stem.

I finished up at the median, packed up my camera gear, and walked back to my truck. On the way back, I decided to photograph some of the many Ageratina altissima or White Snakeroot flowers that were filling the edge of the woods next to the mowed area of the hillside: 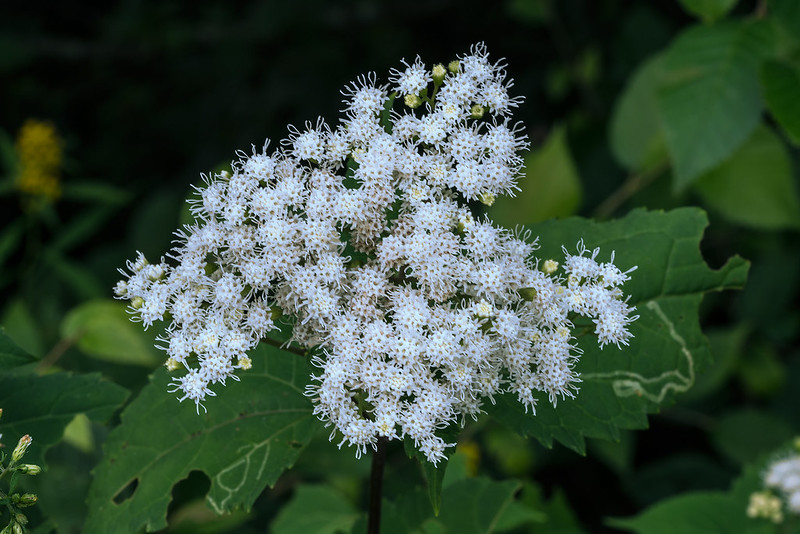 I finally reached the truck and packed my gear. I headed north to see what else I could find. Just a short distance down the road, I spotted hundreds of Nodding Ladies’-tresses orchids just next to the road. It’s a bit difficult to see the detail of the flowers from a wide angle shot, but it was impressive. Here is just a small portion of the area that was covered with these orchids which were just beginning to open their flowers: 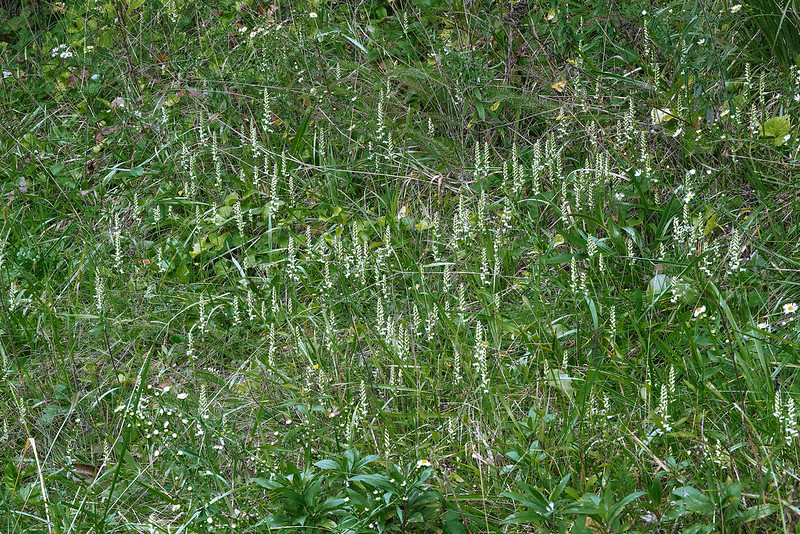 Proceeding up the road, I spotted a number of Gentianella quinquefolia or Stiff Gentian blooming next to the road: 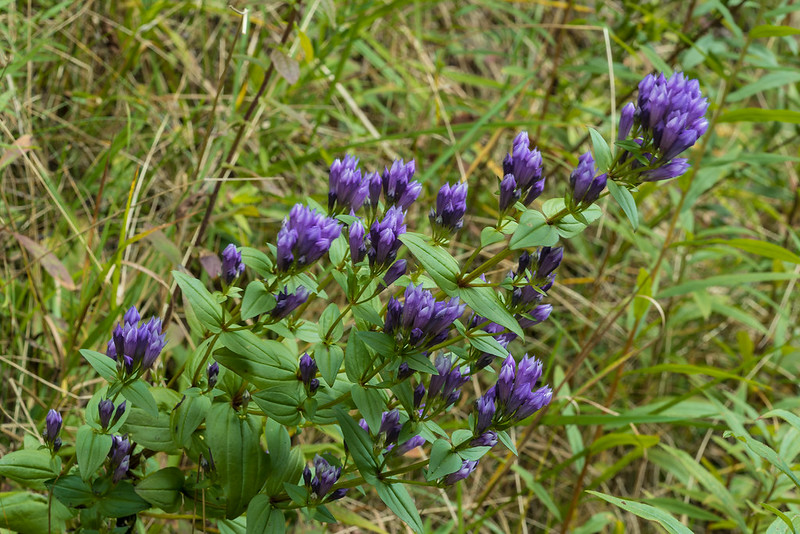 It was time to return to the cabin to finish some outside work. This trip along the Parkway was less than 6 miles (~10 km)! The wildflowers along this portion of the Parkway, just south of Grandfather Mountain, are especially nice this time of year. The best part (for me, anyway) is that they are mostly roadside sites that can easily be spotted while driving along. The posted speed limit on most of the Parkway is 45 mph (72 kph), which is slow enough to allow easy visuals. The only problem, usually, is finding a place to pull off the road. Fortunately, there are numerous paved overlooks with lots of parking area. Just a short walk will bring you to the wildflower spots you had to pass by.

After having seen the proliferation of wildflowers along one small section of the Blue Ridge Parkway, I wanted to check out another section, closer to home. So, I packed my gear and headed toward the Parkway which I accessed through the Pisgah National Forest near Brevard, North Carolina. It was a bluebird day with not a hint of clouds. I usually don’t like to do photography under harsh, sunlit conditions, but I had to take what nature had dealt me.

My first stop was north of the intersection of Hwy. 276 and the Parkway, just past the Pisgah Inn, a century-old hotel situated on a mountain side in the shadow of Mt. Pisgah, one of the tallest peaks in the Southern Appalachian Mountains. Again, I was seeing lots of the white spires of the Ladies’-tresses orchids on the roadside and hillsides next to the Parkway. However, this particular orchid species was Spiranthes ochroleuca or Yellow Ladies’-tresses orchid. Many of the Spiranthes species are tricky to differentiate, but I believe I am correct on this one.

In any case, there were sections of roadside with many groups of orchids in full bloom, but I had to pass these by because of lack of a nearby pull off. However, there were several spots very close to paved overlooks which offered ample opportunity for photography. Here are some of the many images I took of some of these Yellow Ladies’-tresses orchids at roadside sites: 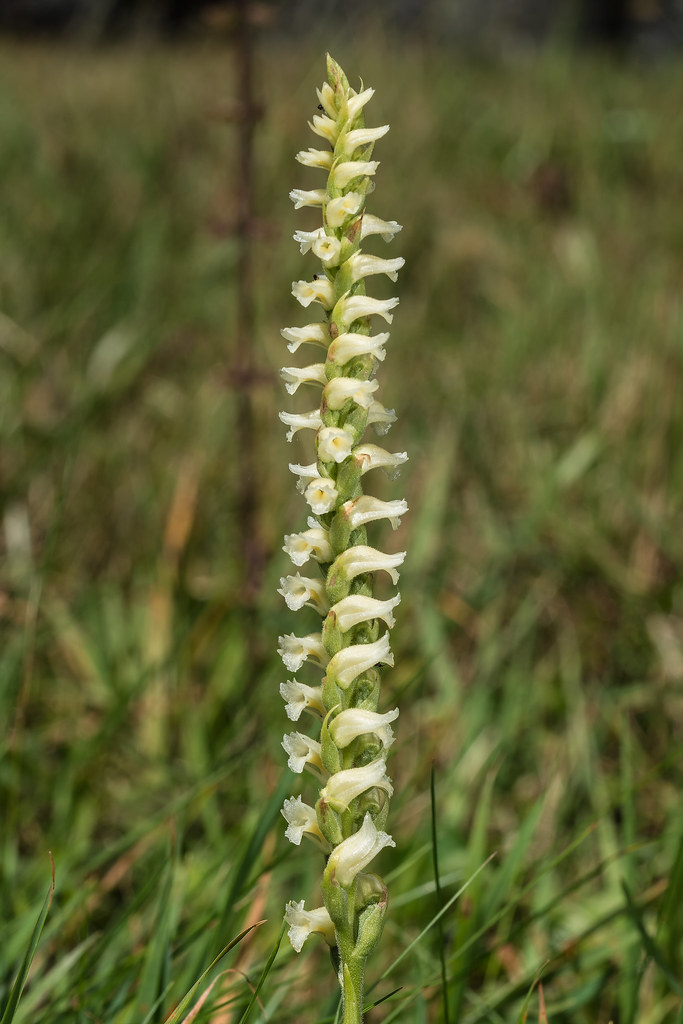 This was a particularly good year for this orchid species, and I was glad that I decided to spend the day with them. But it was time to head farther south, toward a site for a colorful Gentian — Gentiana Saponaria or Soapwort Gentian. There is a good site for these not far off the Parkway, and I was hoping they would be in full bloom. After reaching the site, I gathered my gear and walked a short distance into the woods. There they were! Dozens of plants with numerous flowers at the top of the foot-long stems:

I did manage to find one plant which was growing in full sunlight. This caused the usually closed flowers to open fully to an extent I don’t often see with this species: 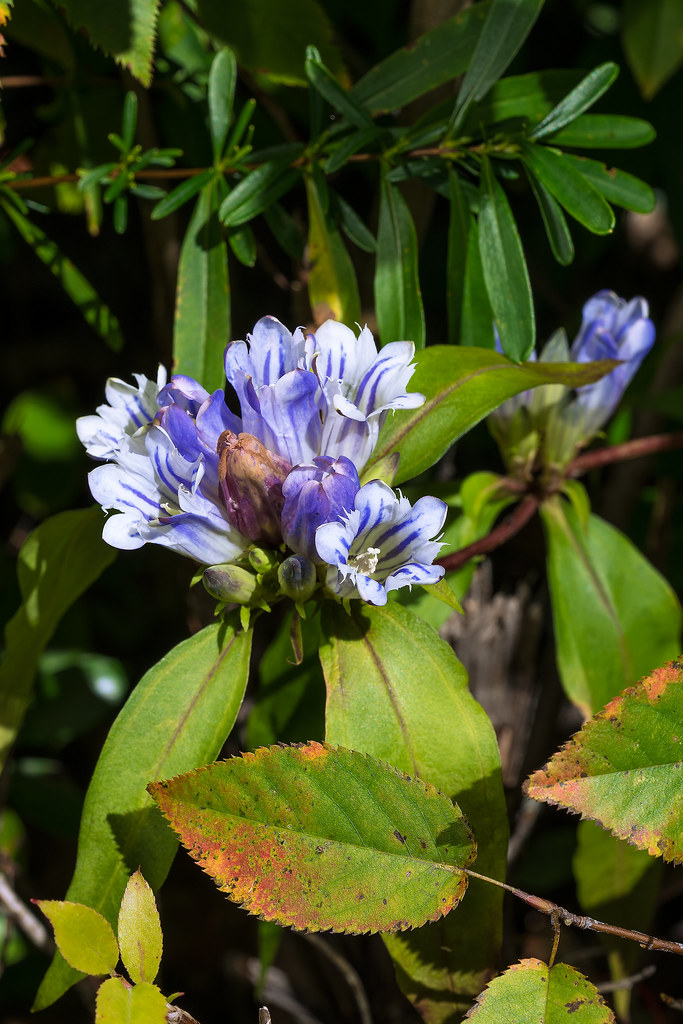 If you are at all familiar with the different Gentian species, especially in the Southern Appalachian Mountains, this open one may appear to be Gentiana decora or Showy Gentian, and there are some of this species in the area. But I’m pretty sure this one is Soapwort Gentian or maybe a hybrid between the two species. There are a number of cryptic Gentian species in this particular area, and I’m always puzzled at what I see here…

Finally, it was time to check out my final planned destination on the Parkway — Wolf Mountain Overlook. I don’t hesitate to name this site, specifically, because so many people already know about it. It is a place for numerous exceptional wildflower species, including the rare, Gentiana latidens or Balsam Mountain Gentian. I had photographed it for my previous blog post, but the flowers were not yet a peak bloom. On this trip, they were! Here are some of the many images I took at this site:

The foliage ranges from bright, yellow-green to deep purplish-green. Here are a few images of the entire plant to give you an idea of how they look from a distance: 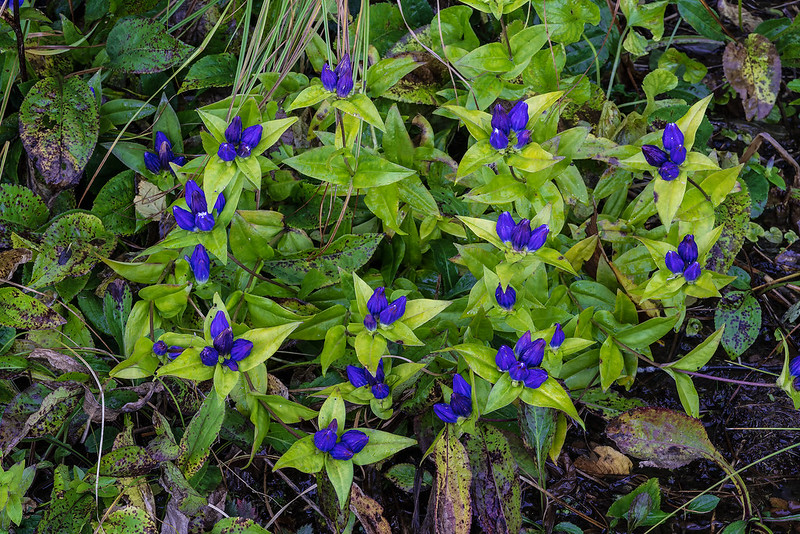 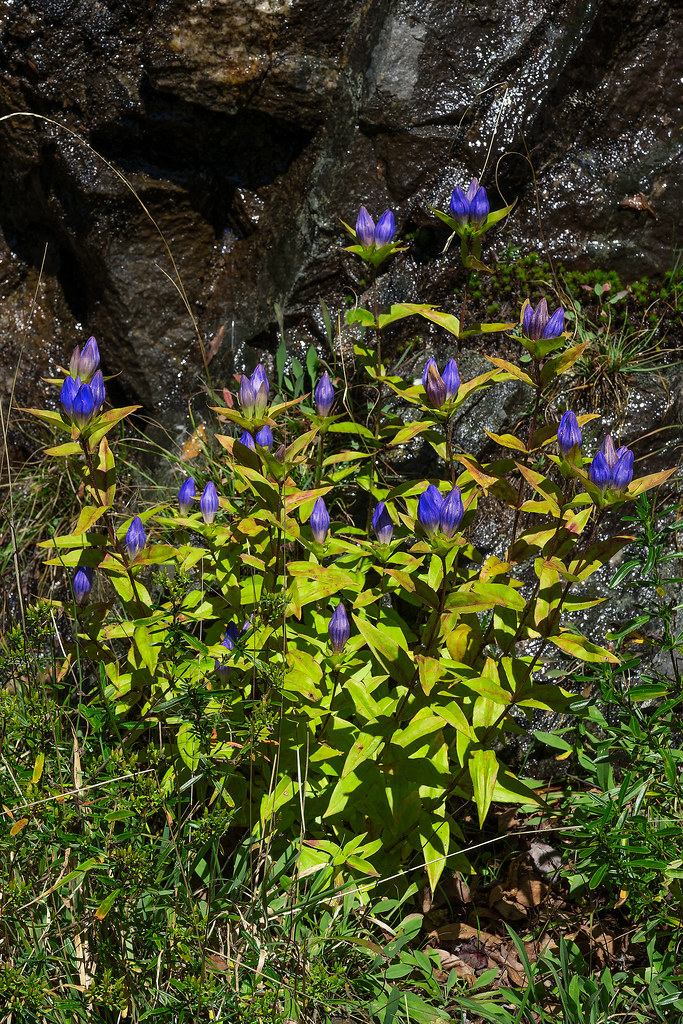 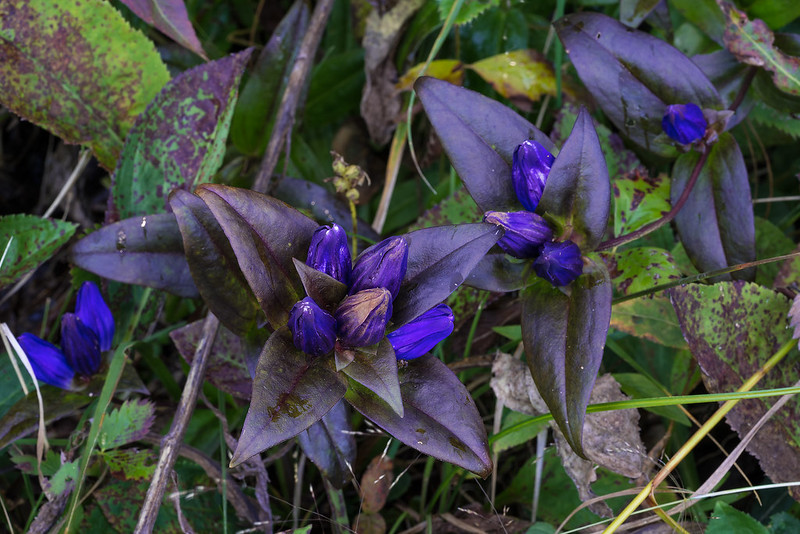 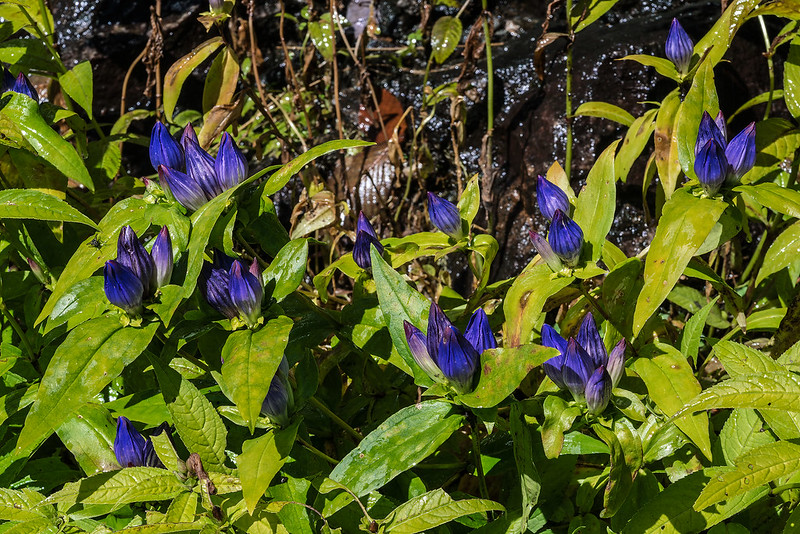 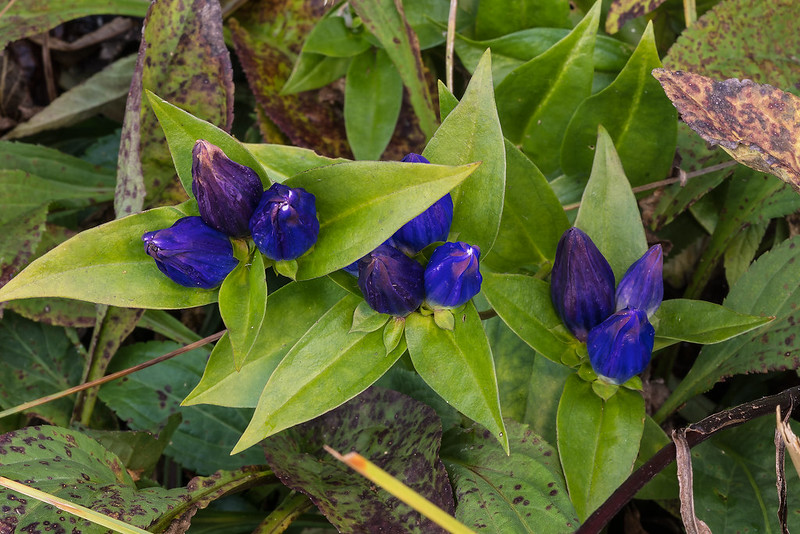 As you can tell, this is one of my favorite Gentian species!

It was now time to head home where I had a couple of additional blues and whites waiting for me in my front yard bog garden. Here are a couple of images of Gentiana catesbaei or Catesby’s Gentian aka Elliott’s Gentian. They were grown from seed a few years ago from a roadside population near the coastal plain of North Carolina, and they were provided to me by my good friend and photographer, Kelvin Taylor:

The other bog garden species waiting for me was Spiranthes cernua ‘Chadds Ford’ or Nodding Ladies’-tresses. Incidentally, these are the plants that provided the image for one of the USPS Wild Orchid stamps (upper right stamp) that was issued in February of this year (2020). Yes, that plant was growing in my front yard! 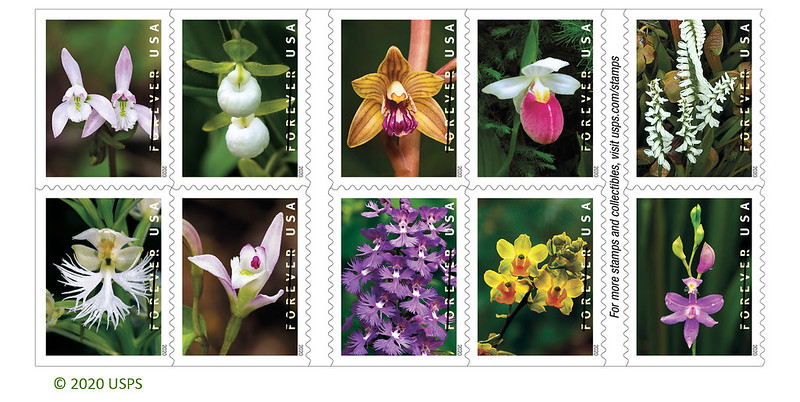 Here are a few of the images from the bog garden: 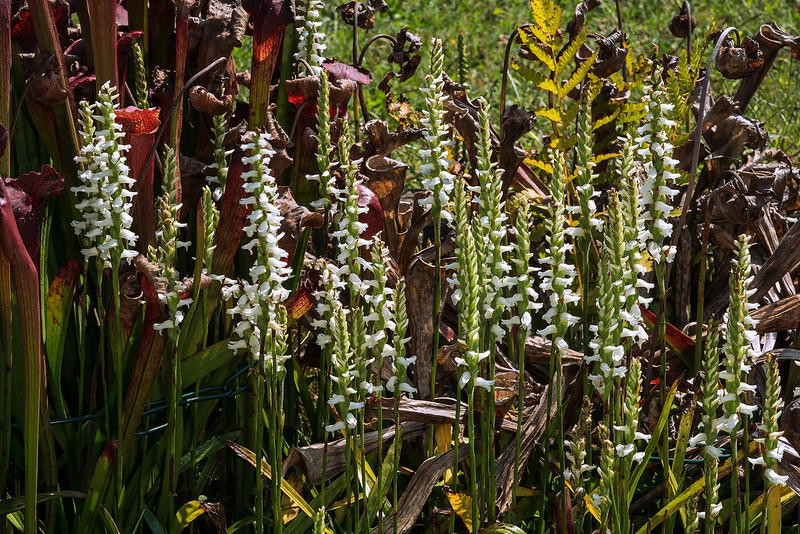 Another wonderful, but long, day in the field! This will probably be my last trip this year for wildflowers along the Blue Ridge Parkway — but you never know… LOL!

I hope to be able to make it to the Carolina coastal plain at the end of October for the final flush of wildflowers in the Francis Marion National Forest (South Carolina) and the Green Swamp (North Carolina). But, the Covid-19 crisis doesn’t seem to be letting up, and my trip would require an overnight motel stay. I’ll just have to evaluate that when the time comes…