Recently, I’ve had a number of people ask me about Ponthieva racemosa or the Shadow-witch orchid. Just in time for Halloween, this strange little orchid blooms in profusion along the South Carolina coastal plain in the Francis Marion National Forest. I do not know how it got its common name, but it is one strange orchid flower.

I arose, bright and early, to make the 4-hour trip down to the FMNF, near Charleston, South Carolina. I’ve known about this particular site for these orchids for a number of years, and last year, when I saw that the remains of tree limbs and tree branches belonging to a tree which had fallen during a summer hurricane had been piled on top of the major portion of this orchid’s preferred habitat, I was quite upset. This year, when I arrived at the site, the limbs were still there, but the leaves had fallen, and it didn’t seem so bad, although the major portion of the tree trunk was still squarely on top of the budding orchid plants — too large and heavy for me to move. 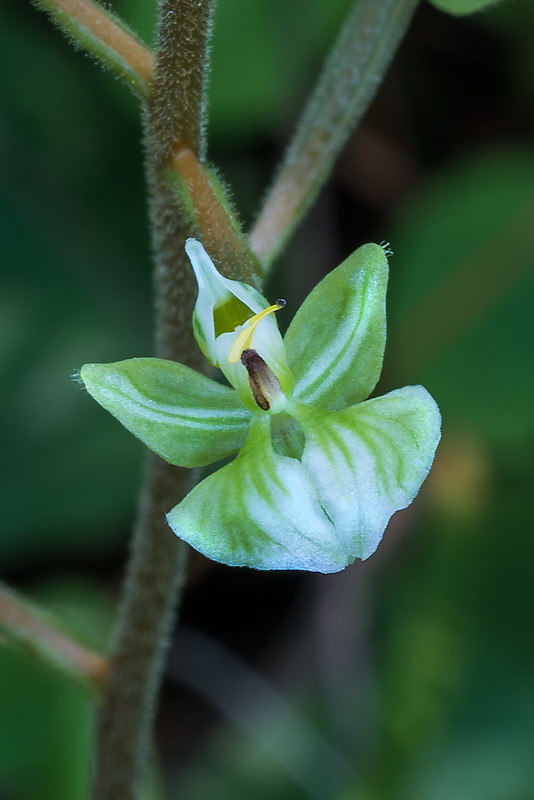 As you can see from the above image, the flower is green and white, and is held out from the main stem by a hairy pedicel — in fact, the main stem is also very hairy. What makes the flowers difficult to photograph is that they are presented horizontal to the ground. If the inflorescence is photographed from the side, all of the flowers can be in sharp focus, but you would see only the edges of the flowers. To get the best view of the flower, the camera would have to be directly overhead, which in some cases would work, but the feel for how the flowers are positioned on the stem would be lost. So, in my opinion, the best way to photograph the inflorescence is to shoot it from an angle slightly above horizontal to the ground. Does that make any sense?

In any case, here is a shot of one inflorescence that was separated from the dense population at this site: 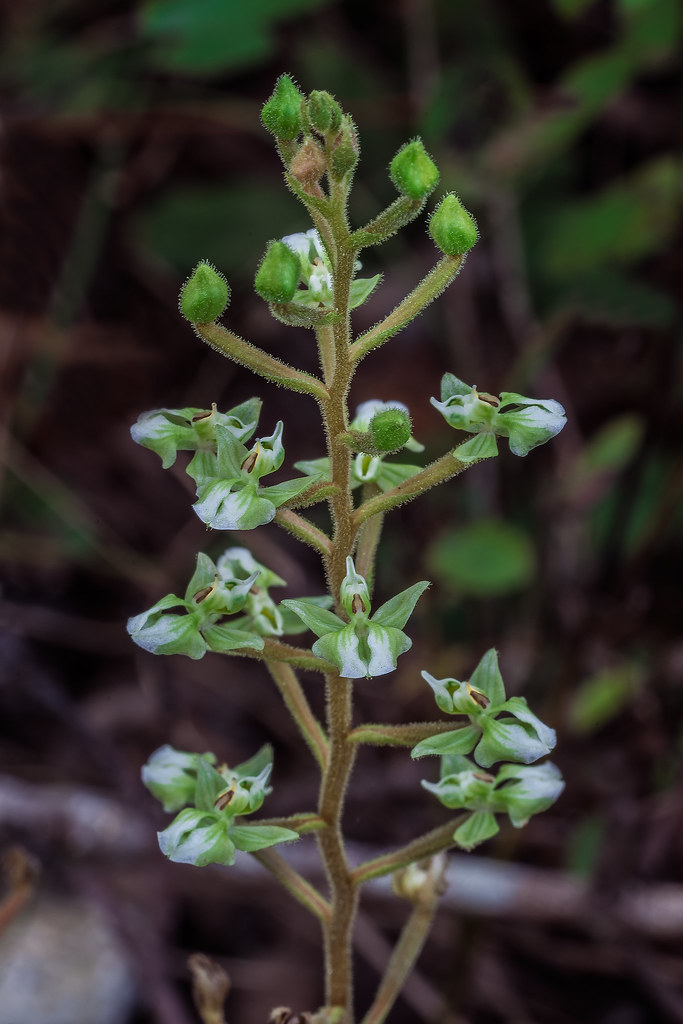 This is a plant which loves a high pH soil. The area where they grow in the FMNF is on the shoulder of a raised roadside. Normally, this would not provide a high pH, because this is mainly a sandy/loamy soil with a bit of clay. What makes it work at this location (and a few other nearby locations) is the fact that the National Forest Service has maintained the road in the past by hauling in a sandy roadbed aggregate loaded with crushed oyster shells. This makes a good roadbed, and the oyster shells are quite inexpensive and plentiful along the coastal plain. When the shells weather and break down, the resulting minerals provide the necessary high pH to make the orchids happy. It has to be noted that they do not grow past the leach trail for the roadbed — just along the shoulder of the gravel road. Isn’t that neat!?! They really do seem to be happy at this site, notwithstanding the tree debris. Here is a shot of just a small portion of the hundred yards/meters of roadside, thick with the blooming orchid plants: 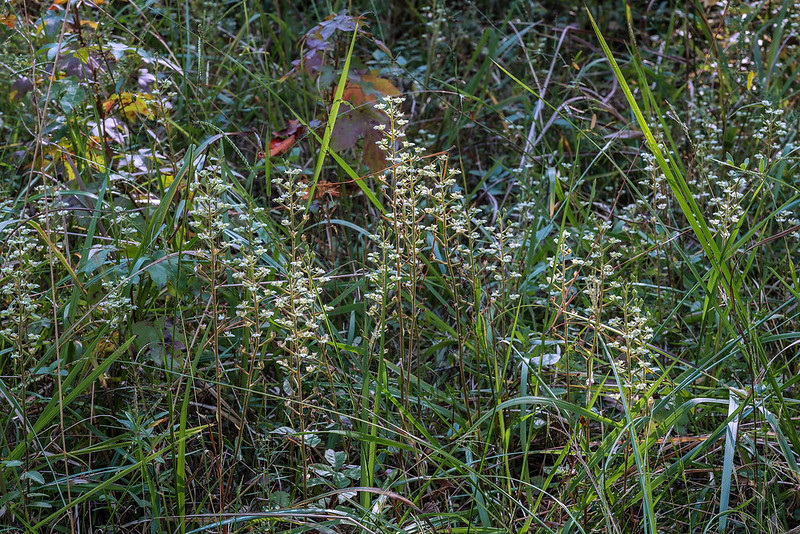 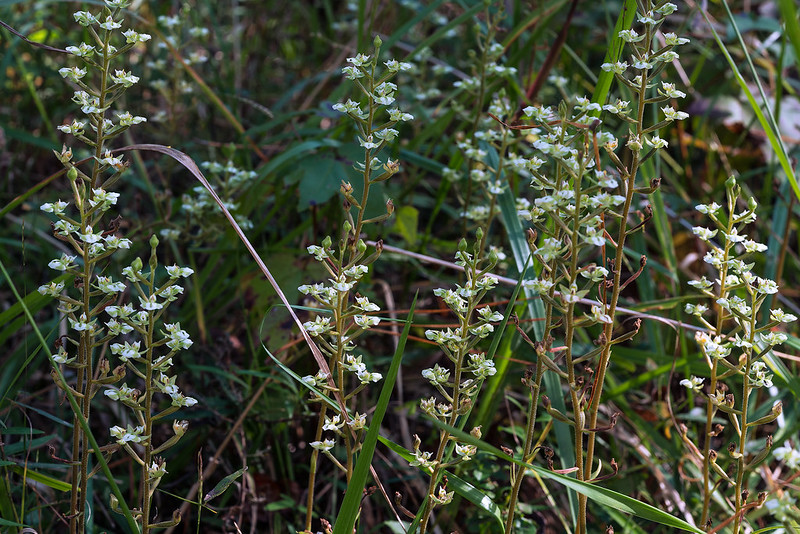 Here are some additional shots of individual plants that I managed to find, separate from the dense grouping:

That last image (above, upper right) shows a seed capsule already forming even though the inflorescence shows many fully open flowers and a few unopened buds at the top.

I thought it would be instructive to show what the leaves look like, so I took the time to do a bit of grass-pulling and weeding to uncover a few sets of basal rosettes of 2-inch (5-cm) leaves: 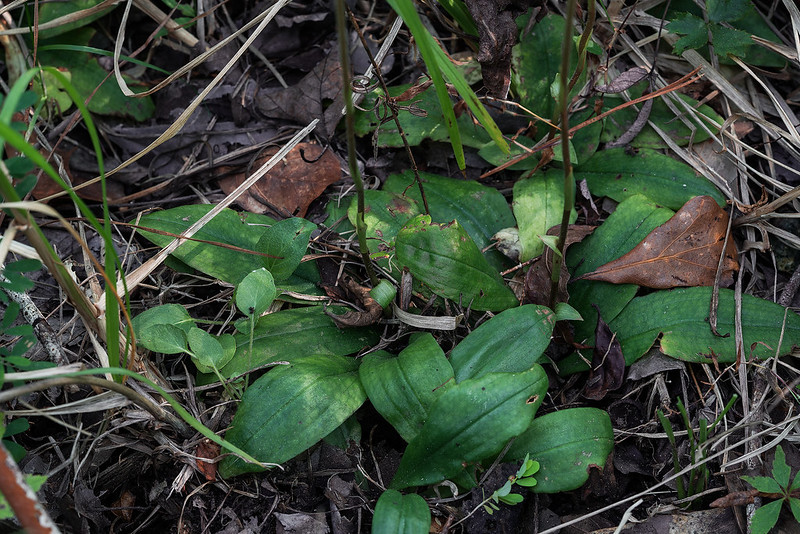 As I mentioned earlier, there were a few other wildflower species in flower, especially along the edge of the mowed roadside. One of these, which was seen in good numbers, is Lobelia glandulosa or Glade Lobelia. This is a species which is found along the coastal plain from Maryland down to Florida and over to a couple of sites in Mississippi. I probably would not have photographed it except I saw a lot of it in the roadside ditches, and it is rather handsome up close. I had originally misidentified it as another Lobelia species, and thanks to an astute reader, I have now made the correction:

Another wildflower species I have to mention, because there was so much of it in bloom down there is Trilisa paniculata or Deer’s Tongue aka Hairy Chaffhead. It was formerly known as Carphephorous paniculata in another life… Don’t get me started about name changes. I like some of the changes, but not all of them, regardless of whether they are necessary or not. I’m just old enough to resist most change. Anyway, here are a few images of these bright wildflowers: 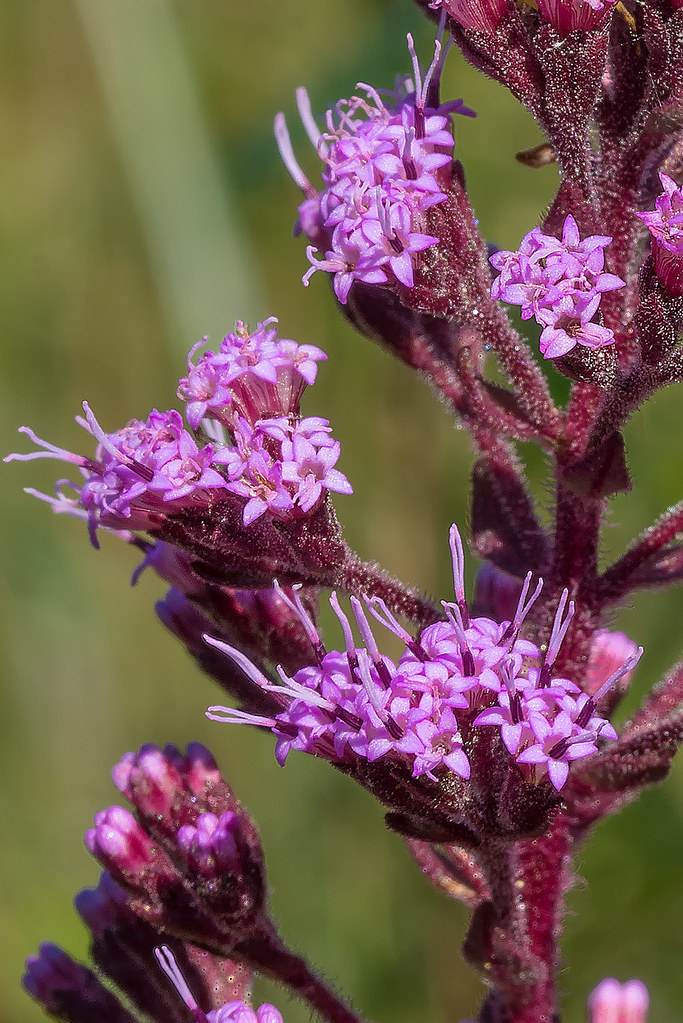 Finally, there was one additional wildflower species that I almost missed. I was able to find only a few specimens that were in full bloom although there were many, many of them just past peak. This is Liatris elegans or Pink-scale Blazing Star. Its long, drooping stems which are almost fully covered with flowers, are densely covered with pinkish-purple sepals which cup very light pink to white flowers: 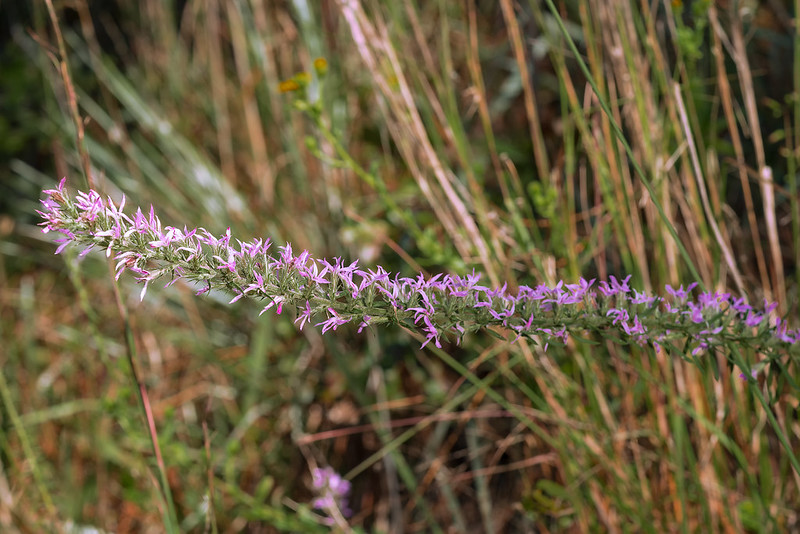 The flowers can be best appreciated up close:

It was a long trip, but I’m certainly glad I went, especially because the Shadow-witch orchids were so nice. I saw many winged pollinators — butterflies, skippers, etc. — but did not get any decent shots of them. Maybe next time. I’ll be heading back in about three weeks for the fall-blooming, Ladies’-tresses orchids and whatever else will be in bloom at the end of October. It will be fun to have you tag along…