I had the morning open to do some fun things, so I thought about what might be blooming nearby. This is the time of year for fall wildflowers in an upstate South Carolina heritage preserve which I consider one of my favorites — Eva Russell Chandler Heritage Preserve, in northern Greenville County, South Carolina. It borders Persimmon Ridge Road, which again, is one of my favorite byways for seasonal wildflowers.

This heritage preserve is habitat for several state species of concern as well as a federally listed pitcher plant species. Besides that, it offers a spectacular view at the end of a short trail opening onto a steep, granitic bald. On a clear day, the tallest buildings of Greenville, my home town, can be seen at a distance of about 35 miles. It is also home to one of the handful of rare, cataract bogs which might be found in the area. Some images of this cataract bog can be seen here. I’ve probably given more publicity about this area than I should, so I won’t provide you any more information about this place, but if you are interested, you can do some research on your own and perhaps make a visit.

This day was what many call a “bluebird day” — sun shining brightly, and the sky seeming to be more blue because it is framed by the color of fall leaves. A bluebird day for us in the Southeast without snow. I generally don’t appreciate this type of day, especially for photography, being more accustomed to photographing wildflowers in subdued/diffused light provided by high overcast. However, it was quite refreshing to get out in the morning while the air was still crisp, and the wind was calm. 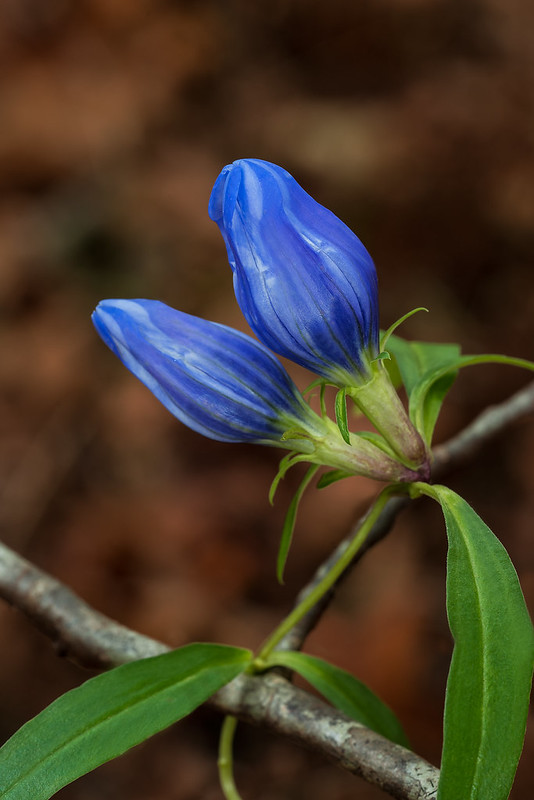 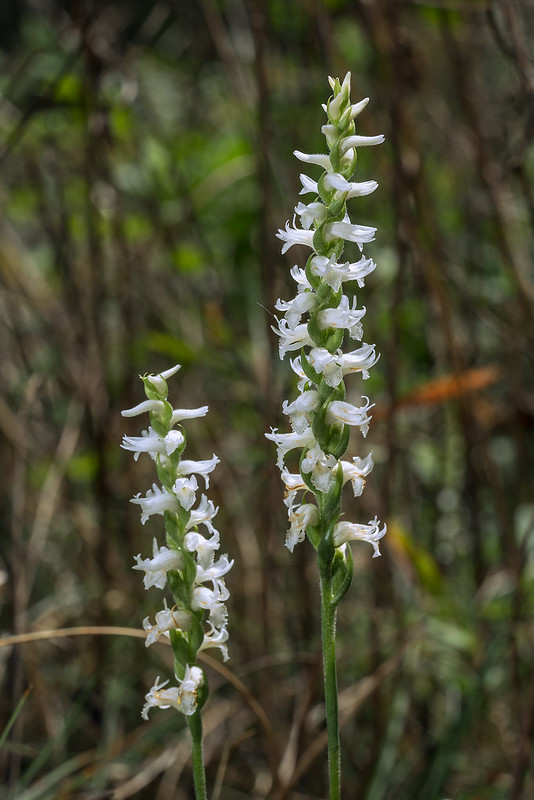 The two target species were Gentiana saponaria or Soapwort Gentian and Spiranthes cernua or Nodding Ladies’-tresses orchid, if I could find any of the latter. Sometimes, they are fickle and don’t reappear each year in the same spots. BTW, Gentiana saponaria is often referred to as Bottle Gentian, however, this is quite confusing because there are more than a handful of Gentian species saddled with that common name. That is why I would prefer to use the botanical name in most instances, because it is unique and not likely to be confused with other genus/species names. But there are a couple of problems associated with botanical names: 1.) They change, although (sometimes) for good reason, on an all too frequent (for me, anyway) basis, and 2.) sometimes, I get the botanical name wrong because I fail to key it out properly. But I digress…

After all of that botanical foreplay, I’m here to tell you that I made it up Persimmon Ridge Road to one of the 4 access points to Eva Russell Chandler Heritage Preserve. Again, I won’t go into more detail, because the fun part of this is in the hunt, and you, Dear Readers, are more than capable of doing this on your own.

While walking down the foot-trail, I was enjoying the crunch of fall leaves and the occasional sight, here and there, of the leaves of one of the mid-summer orchids, Tipularia discolor or Crane-fly orchid. 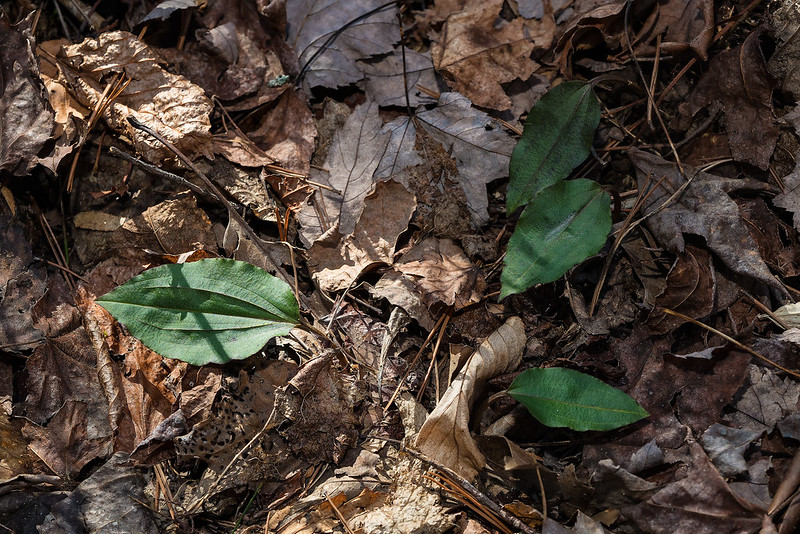 They take advantage of the leaf drop in the fall by springing forth their single leaf in October so that they can take in all of the winter sunlight they can get. This is a good strategy or game plan for them, due to the fact that they live in the shaded forests and don’t receive any appreciable sunlight when the flowers bloom.

In a short time, I arrived at the place where I have seen the Soapwort Gentian in flower in previous years. A glance to the right of the trail provided me with my first bright blue flowers: 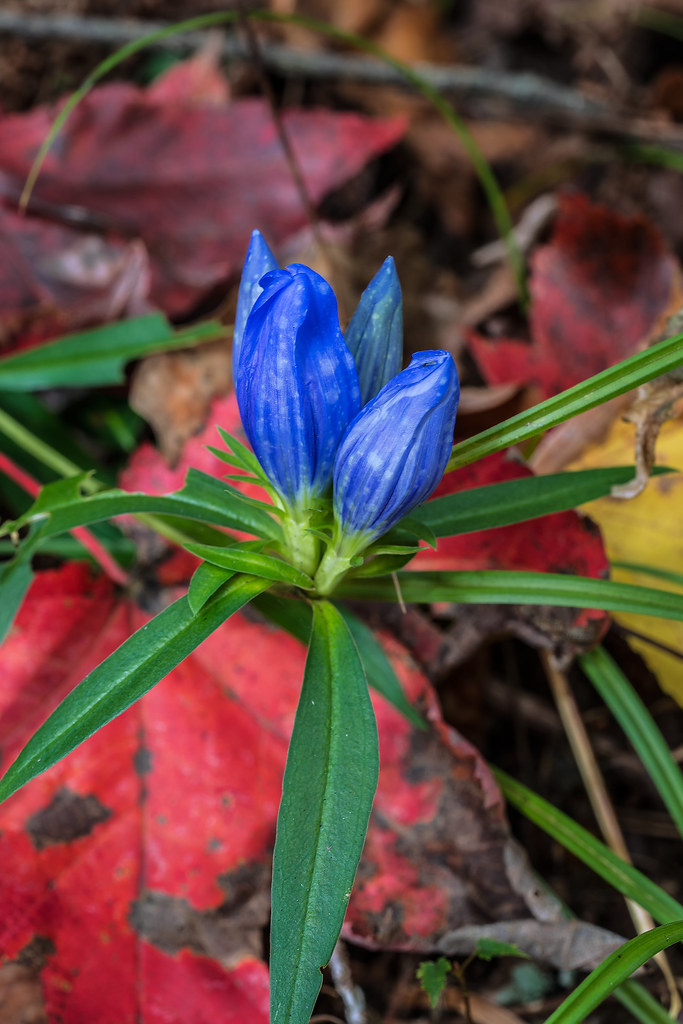 Something needs to be mentioned here about this particular population of Gentians. A couple of years ago, a botanically minded friend asked me about a peculiar Gentian he had found in the foothills of North Carolina. He said it was Soapwort Gentian, but the leaves were particularly more linear and strap-like than those of the typical species. I confessed that I had seen the same thing in one of our state heritage preserves. He wants to call it “Cherokee Gentian”, which I find to be an agreeable common name. Obviously, much more technical work will have to be performed on these specific plants, but I thought I should mention this before I proceeded with additional images. We might just have a different variety of Gentian here.

Many of the plants I found were just beginning to be presentable, but not quite. So I walked toward the end of the trail to see what else I could find. Almost at the end and near the creek, I spotted one last Gentian in pretty good shape, except one of the flowers had been clipped midway up the corolla. Perhaps a pollinator had felt trapped inside and decided to chew its way out: 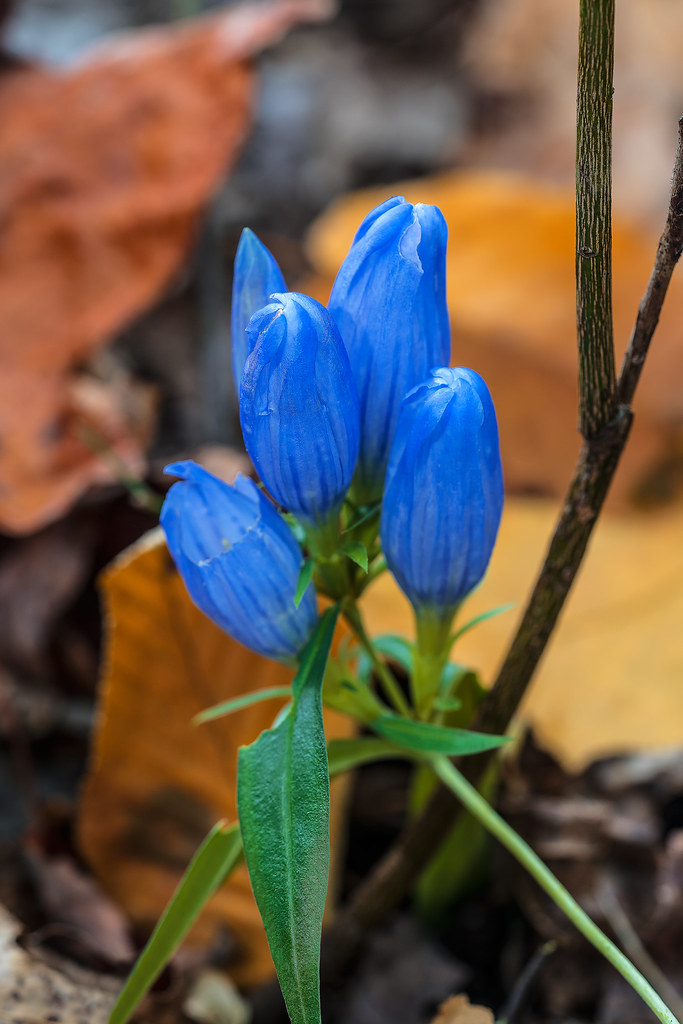 Upon reaching the end of the trail, I found myself on the top of the granitic bald with the creek to my left. Growing in the vegetative debris at the edge of the shallow creek, were dozens of Parnassia grandifolia or Large-leaf Grass-of-Parnassus. Unfortunately, I was a few days late to catch the perfect blooms, but I did manage to find a single one in pretty good shape:

I finished with these beauties and made my way across the bald to a small seep where I found a dozen or so Spiranthes cernua or Nodding Ladies’-tresses orchids in full bloom — the second of the two target species for this trip. I had found this spot about 10 years ago when there were many dozens of blooming flowers in this one small area on the side of the bald. But ensuing years had brought drought and other natural events that I though had wiped out this small population. Last year, I found only 3 or 4 blooming plants. On this visit, the plants were in really good shape, but as usual were difficult to reach, being precariously perched on a steep portion of the bald. Each year, it becomes more and more difficult for me to find a good foothold on the slippery rock face to get close enough to photograph them, but I did manage to get a few good shots on this trip.

This is where I should mention that recent name changes in the Spiranthes genus have caused me and more than a few others to become a bit uncertain about which species we are seeing. Spiranthes cernua has been subsequently split into a good number of other species, and the distinguishing features of these “new” species are sometimes quite subtle. So…… for lack of a better reason than I can’t decide which new species they are, I’ll call them all Spiranthes cernua or Nodding Ladies’-tresses orchid. Please feel free to offer an opinion of your own in the comments section, below, if you feel that you can more accurately identify the correct species from my images. In fact, I would very much welcome such useful information. Here are a few shots from this population:

I was about done with this trip, so I decided to head back up the top of the bald and down the trail to my truck, all the while being just a bit disappointed at what I had found, or rather at what I had not found. My hope was to have photographed additional Gentians and Ladies’-tresses orchids, but that was not in the cards on this trip.

On my way back down the mountain, I had to pass another entrance to the Preserve. In the spring, it is absolutely loaded with Calopogon tuberosus or Grass-pink orchids, as well as several carnivorous plant species. It is a broad seepage area bound on all sides by dense woods. A couple of years ago I was stunned to find that feral hogs had uprooted almost the entire area and had laid waste to the orchid seep. I was not going to stop at this location until I remembered that I had seen a couple of dozen Spiranthes cernua blooming in that same orchid seep. I still had some time left before I had to return home for chores, so I decide to give it a shot.

The walk in was not bad — rather level, although it is somewhat downhill. The trail is an old roadbed that is overgrown with encroaching woodland plants, but it was not difficult to navigate. I eventually made it to the seep. Upon reaching the entrance to the open seepage area, I could spot many dozens of white spires in the distance! What a sight! It is quite impossible for me to capture these orchid inflorescences because they are mostly hidden by tall grasses growing in the seep. But here are a few shots I made to attempt to show what I was seeing: 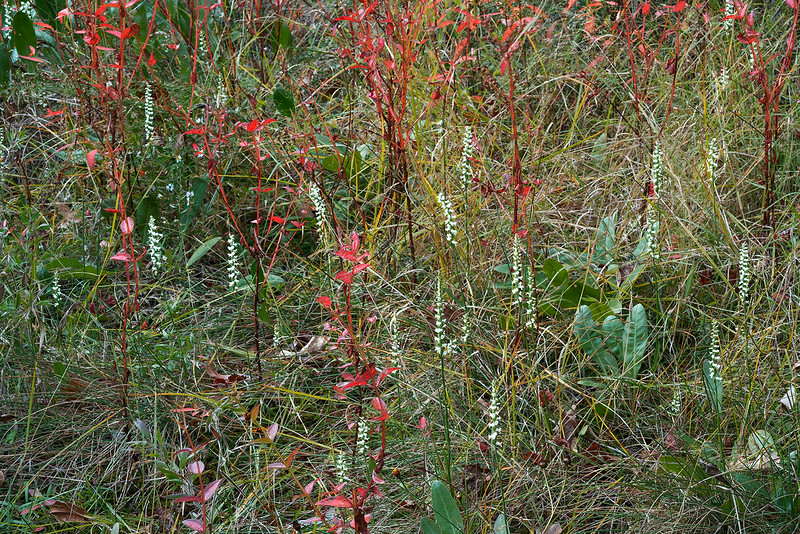 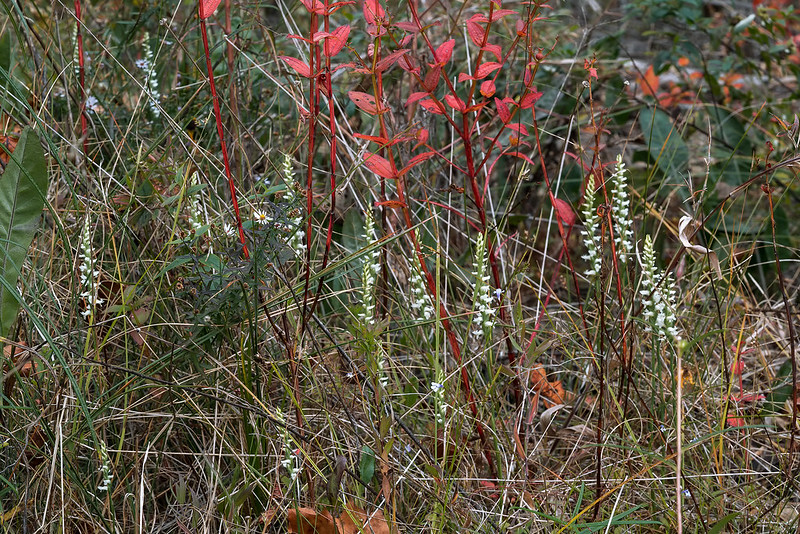 But the remarkable thing for me was the number of plants growing in less than an inch of soil, directly on the surface of the granitic bald!:

These little “micro islands” are no more than a few inches to a foot across, at most. And yet, they support a dozen or more different species of plants in season! Here are some close-ups of some of the orchid plants at the edge of the seep: 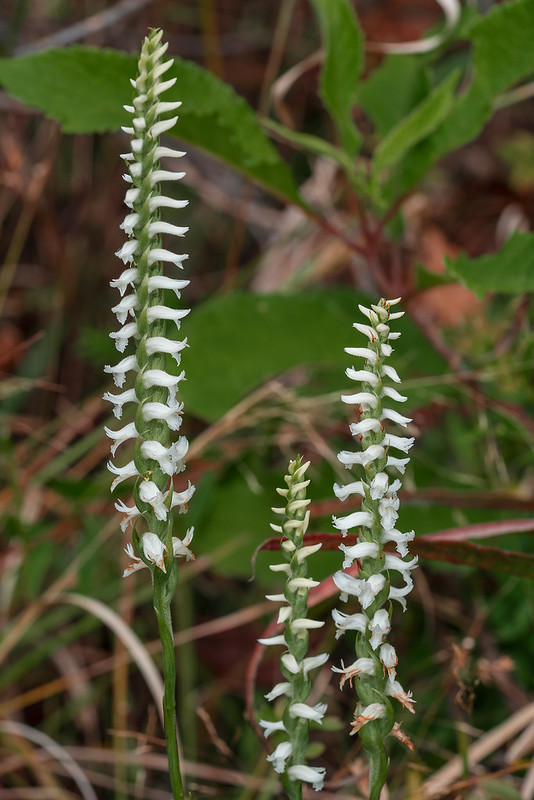 I really had not expected to see all of these orchids in one place! After my photography was complete, I just sat on one of the few dry spots of the granitic bald and took in all of the beauty, so happy that I had decided to stop and check out this site.

When I arrived home, I unpacked my gear and took the camera inside to download the day’s work. After doing so, I walked outside to check on my front yard bog garden where the remains of the Fragrant Ladies’-tresses orchid were almost done for the season. In another part of the bog garden, there were about a dozen stems of Gentiana catesbaei or Catesby’s Gentian aka Elliott’s Gentian in full bloom. My good friend and photography buddy, Kelvin Taylor, had given me some small starter plants he had grown from seed he had gathered along the coastal plain of North Carolina several years ago. They were doing quite well in my small bog garden. While I was enjoying seeing the sky-blue flowers of the Gentians — some open and most of them closed as is typical with this species, I noticed a few bees doing their thing with pollination. I told myself that I would attempt to capture this frenetic act the next day, and I did just that. Here is the (amateur) video result:

Bees and Catesby’s Gentian in the Bog Garden

It took me about an hour hanging around with anticipation before getting this shot, but I’m awfully glad I did. Isn’t it neat how the bees manage to burrow down into the flowers completely, struggling to get back out when they are finished? Maybe I’ll be able to recover some seeds, myself, if the pollination was successful.

The next foray into the wild is just a few weeks away. I plan to visit the Carolina coastal plain where the end of our wildflower season will show us several orchid species and other floral beauties.