The cusp of October/November is the time of year for the last gasp of wildflowers along the Atlantic Coastal Plain of the Carolinas. I always get a big kick out of visiting my favorite swampy, boggy, mucky areas in the Francis Marion National Forest, where the last of the fall orchids, Spiranthes odorata or Fragrant Ladies’-tresses orchid bloom in profusion. On this particular trip, two new friends of mine, Jim Brighton and Jared Satchell, both from Maryland, were in the area and wanted to see some of the wildflowers of the Carolina Coastal Plain. Since Walter Ezell and I were going to be making a trip down on Friday, we decided to join up for the final field trips of the season.

Spiranthes odorata or Fragrant Ladies’-tresses orchid is one of our most beautiful Spiranthes species, with flowers up to 1/2 inch (12 mm) long and with a distinctly earthy-sweet fragrance, reminiscent of vanilla and jasmine. They grow in a wet, boggy habitat that is sometimes (often) inundated for a portion of the year. That’s why rubber boots are de rigueur. The flowering portion of the plant may reach 3-4 feet (~90-120 cm) tall, with the top 6-8 inches (15-20 cm) loaded with fragrant flowers, which are “spiralled” around the uppermost portion of the stem. Here is a close-up of one of the inflorescences we photographed: 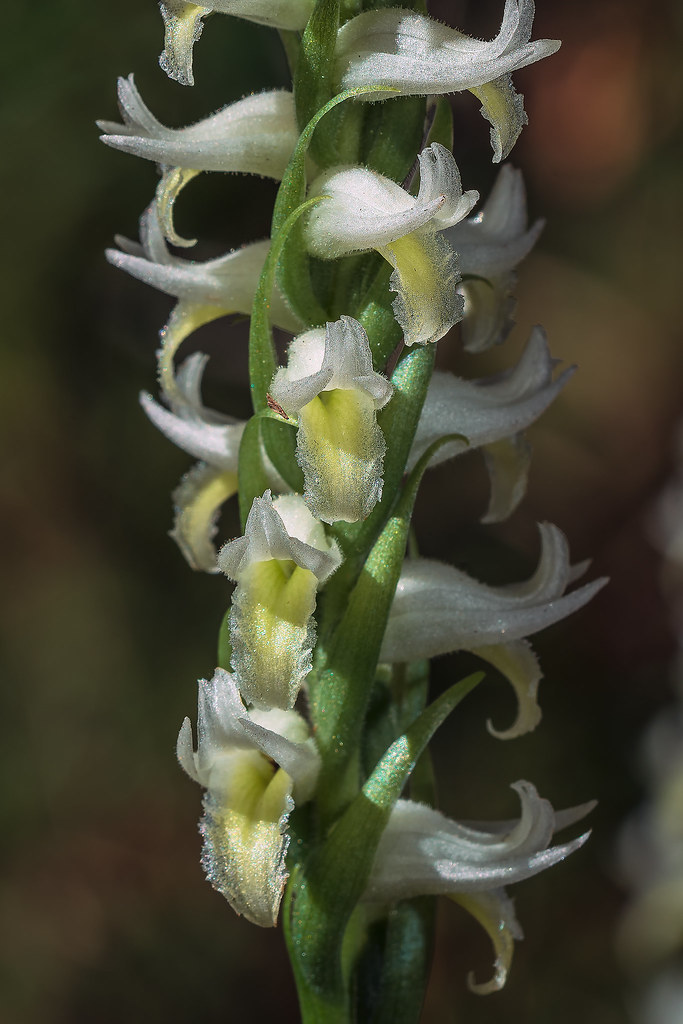 We had earlier planned to meet at the crossroads of Steed Creek Road (locally known as “Orchid Alley”) and Halfway Creek Road around noon. It was a 4-hour trip for Walter and me, coming from Greenville, South Carolina, and a 2-hour trip for Jim and Jared, coming from Lake Waccamaw, North Carolina, where they were spending a few days. Surprisingly enough, we both arrived within 20 minutes of each other!

The first spot we had planned to visit was a Forest Service Road that runs directly through the Wambaw Swamp Wilderness Area. To show how remote this area is, I’ll quote a bit of text from the US Forest Service’s characterization of the area,

“There are no trails in the wilderness so those hardy enough to take on a slow-paced slog generally rely on orienteering skills to navigate. The wilderness is comprised of bottomland hardwood forest and is edged with small pine stands. While it offers little dry land, the water level is usually too low for boating. Mature cypress and tupelo trees and relatively open understory, provide some easier hiking and an opportunity to explore a place where very few people go.”

I highlighted that last portion for effect. It is, indeed, a wild and swampy place — just where I like to be. It is not a place you would find yourself, except when you intentionally wanted to be there.

We arrived, put on our boots, gathered our gear, and headed out into the swamp. I had cautioned Jim and Jared that I couldn’t promise we would see the orchids in good shape, because one never knows, for sure, the exact bloom date, although this last week of October would be a good bet. About 100 feet (30 meters) in, we began to see some of the orchids, but they were about fully bloomed out, with the bottommost flowers being shriveled and brown. We soldiered on, and soon we began to see much fresher specimens. Whew! I was relieved that the trip would not be a complete bust. Here are some images of the Fragrant Ladies’-tresses orchids in this portion of the swamp:

In a wet depression, we found a nice group of about 20 blooming specimens in great shape: 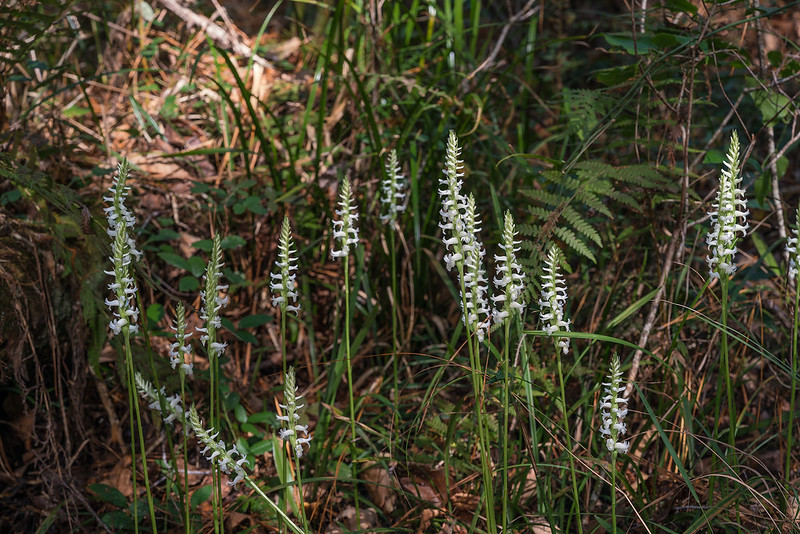 Here is an unusual morph of the Fragrant Ladies’-tresses orchid with spreading sepals. There were a few of these scattered among the typical specimens: 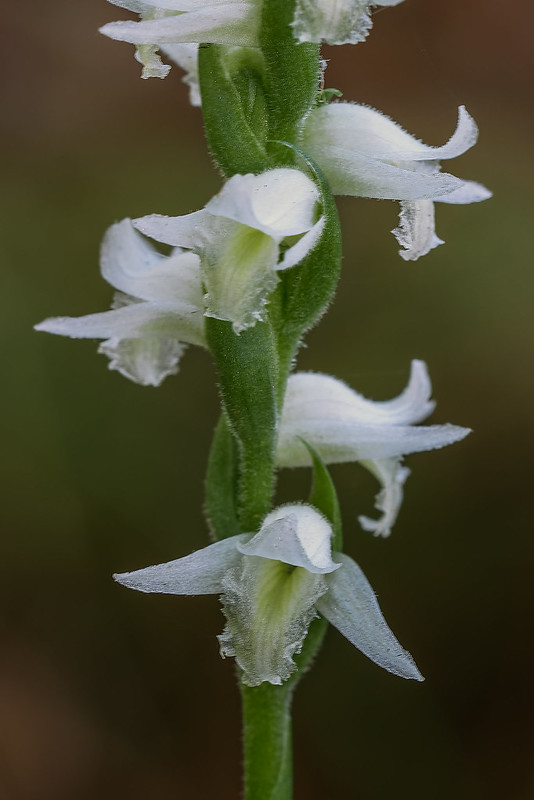 We were seeing a number of Skipper species flitting from flower to flower, but I was not quick enough to get any good shots of them.

Here are a couple of shots that Walter took of Jim and Jared. In the first shot, I suppose I’m bloviating about some insignificant fact about the swamp — who knows… (Jim Brighton on the left and Jim Fowler on the right): 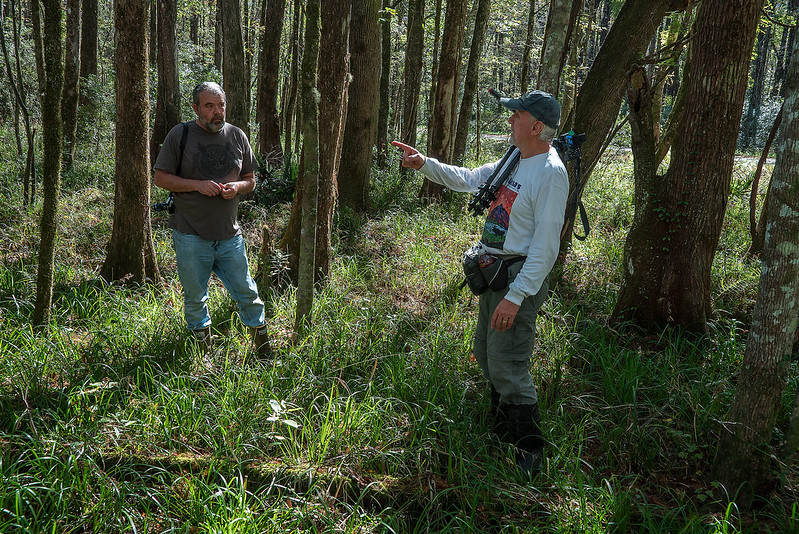 Below, is Jared, intently focused on an orchid specimen (out of the image frame), although there is a good one right next to his camera: 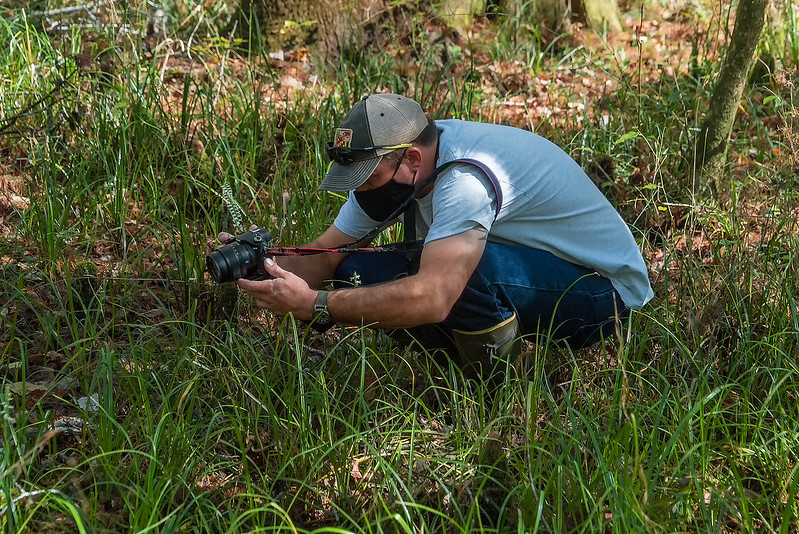 We happened upon a really colorful Sabatia dodecandra or Marsh Rose Gentian that was at peak form. It’s bright rose-pink color made it difficult to overlook: 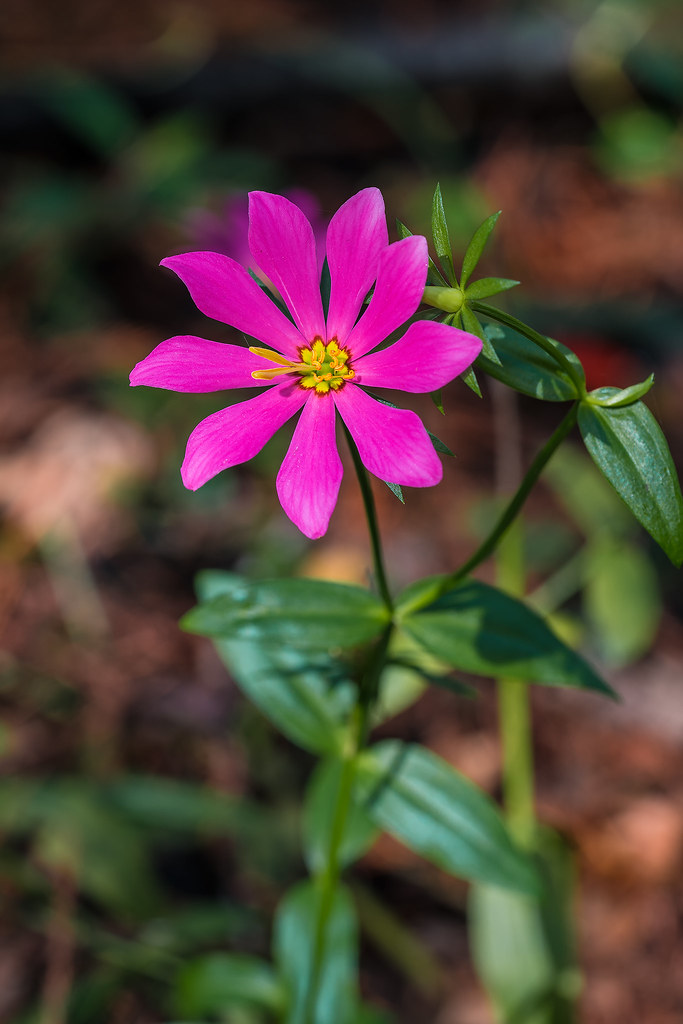 We finished up at this spot and headed down the road to another area where I had photographed another orchid species, Ponthieva racemosa or Shadow Witch orchid on my last trip to the area about three weeks ago. Both Jim B. and Jared had wanted to see this species in flower — a lifer species for both of them.

We finally arrived at the Shadow Witch orchid site, but even with careful searching of the entire area, no really good flowers were found. Jim and Jared photographed a few of the withered flowers that remained, but they will have to return the first week in October to see them in peak form. Bummer…

I informed them that there was a good area just up the road for additional Fragrant Ladies’-tresses orchids, and they agreed to follow me to the site. We arrived, gathered our gear, and headed over to the swampy area to the left of the Forest Service Road. Again, we found an amazing display of orchid plants in full bloom. I’m supposing we spent another hour or so selecting the “best” specimens to photograph. Here are some of the many good specimens we saw: 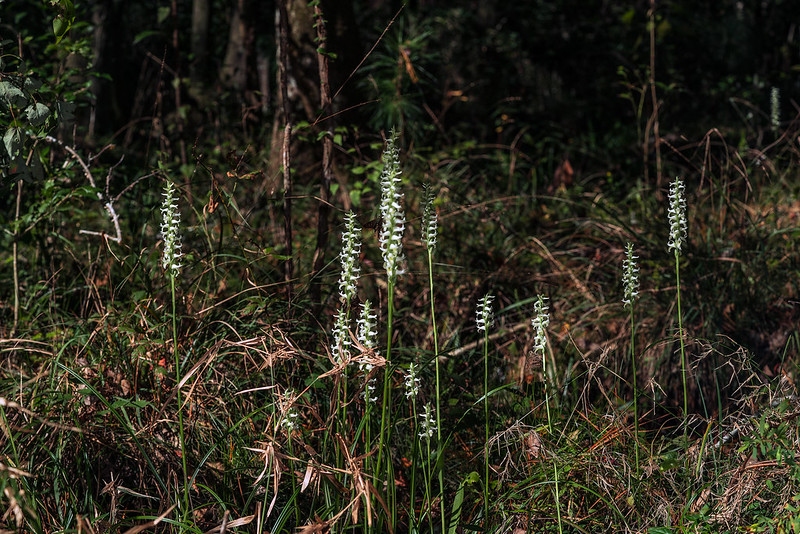 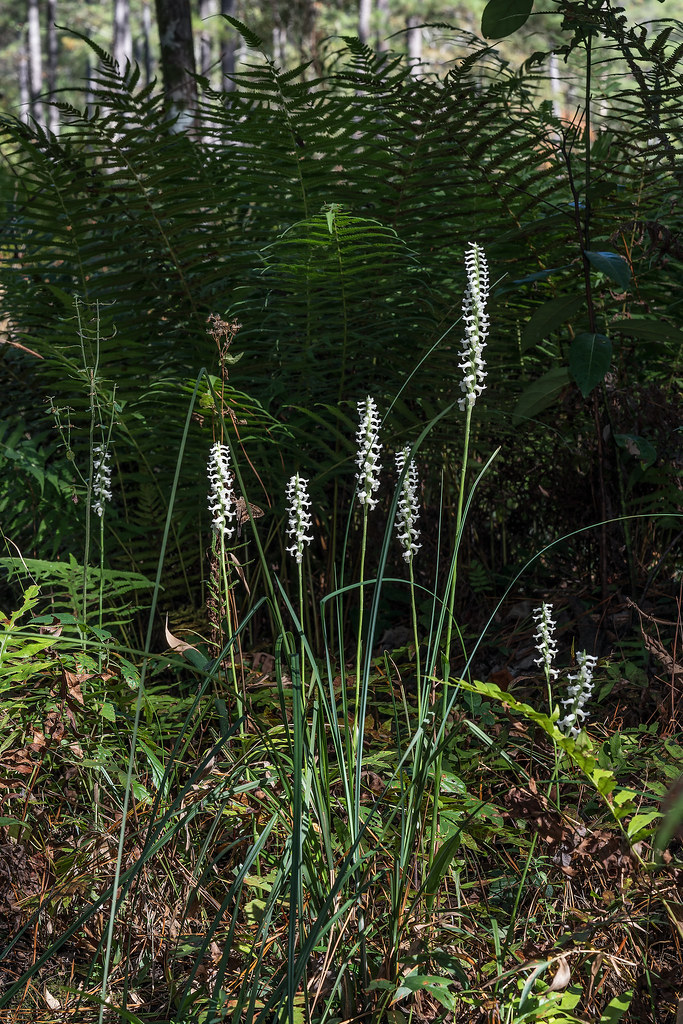 I did manage to photograph a colorful Urbanus proteus or Long-tailed Skipper, pollinating one of the orchid flowers: 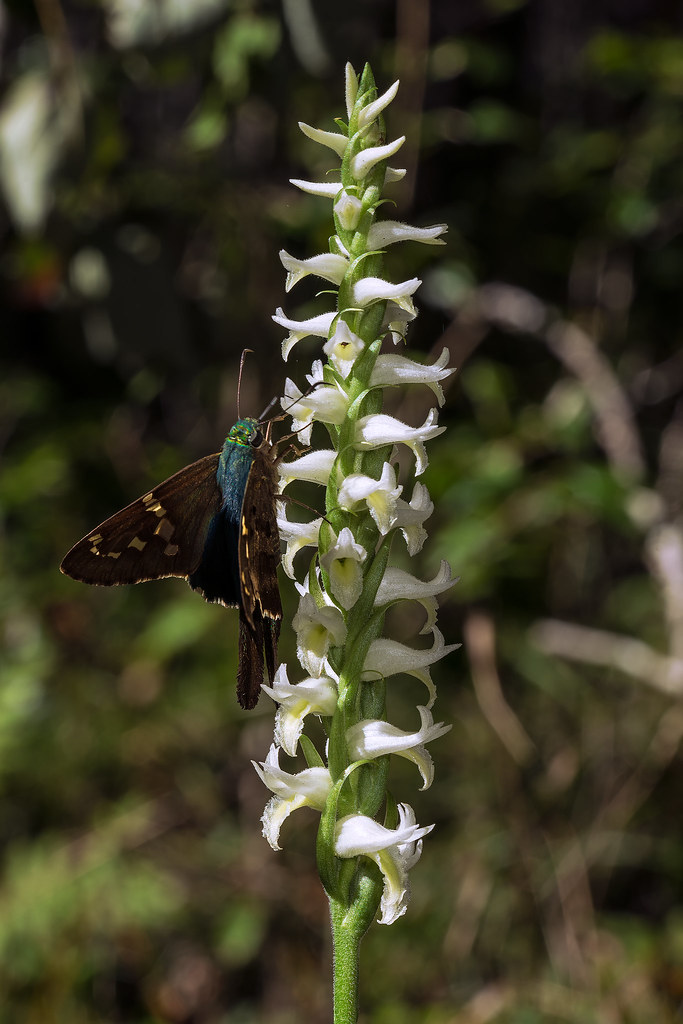 Walter and I decided that we needed to head on up the road to our motel for the evening. Jim and Jared said that they would stay and roam around a bit to see what else they could find. We said our goodbyes and planned to meet at 8:30 am the next morning at “The Pond”, a local meeting place at the Green Swamp Preserve in Brunswick County, North Carolina. We would be joined by my good buddy, Kelvin Taylor for a full day in the Green Swamp.

The Fragrant Ladies’-tresses orchids were surprisingly beautiful on this trip. I was happy that Jim B. and Jared were able to join us and see the best that the Francis Marion NF had to offer during this late fall season. We had a great time out in the field, and were all looking forward to what the next day would bring.