A bit of housekeeping before we get started: Recently, I have been trying to keep this blog up-to-date and to keep all of the parts and pieces working, but recently I have had several issues that are just beyond my ability to cope with. One of them is the Comments section down at the bottom of each blog post. Currently, it no longer works. Additionally, the coding that sends out notifications of new blog posts sent multiple notifications to many of you on the most recent posting — not good, and I apologize for the inconvenience. There are other issues, as well, so I have hired on a website team that is part of my blog hosting company to take over the website upkeep responsibilities. They are in the process of cleaning up the coding and updating all of the parts to make sure it runs smoothly and efficiently. We will see how this works out. It may take a month or so to complete the process; we are not sure at this point what is the entire scope of the project. For now, please bear with me until the work is done.

The images which are the subject of this post will probably look familiar to you, especially if you perused the most recent blog post — the first post of 2021. Currently, there is not much in bloom in the upstate of South Carolina except Erythronium umbilcatum or Dimpled Trout Lily, although much will come into bloom in the next few weeks. Walter Ezell and I decided to make a trip to our most prolific site for these tiny yellow beauties to catch them at their peak and to look for signs of other wildflowers poking out of the ground. The place I’m referring to is Nine Times preserve, a TNC (The Nature Conservancy) site encompassing more than 500 acres (226 hectares). According to the official website:

“The towns of the native Cherokee people along the Big Eastatoee River were connected by a trail that ran through this area. Travelers between these towns, from early settlers up through the mid-twentieth century, had to cross a two-mile-long tributary of the Little Eastatoee River nine different times in order to stay on the path. This tributary now is known as Nine Times Creek. It parallels the northern border of this 560-acre nature preserve. Nine Times Preserve lies at the intersection of South Carolina’s Southern Blue Ridge Mountains and its piedmont region, where mountainous terrain begins to slope into gentler hills. Black bear, peregrine falcons and freshwater trout are just a few of the species you may find on this incredibly biologically significant property. More than 134 species of native wildflowers bloom in Nine Times Preserve. The preserve encompasses five mountains and seven distinct forest types.”

In order that the subject will not be too boring, I have attempted to make these Dimpled Trout Lily images a bit more “artistic” rather than just documentary. I’m not sure I achieved this goal, but I’m pleased with the results. Here is what we saw on this trip to Nine Times: 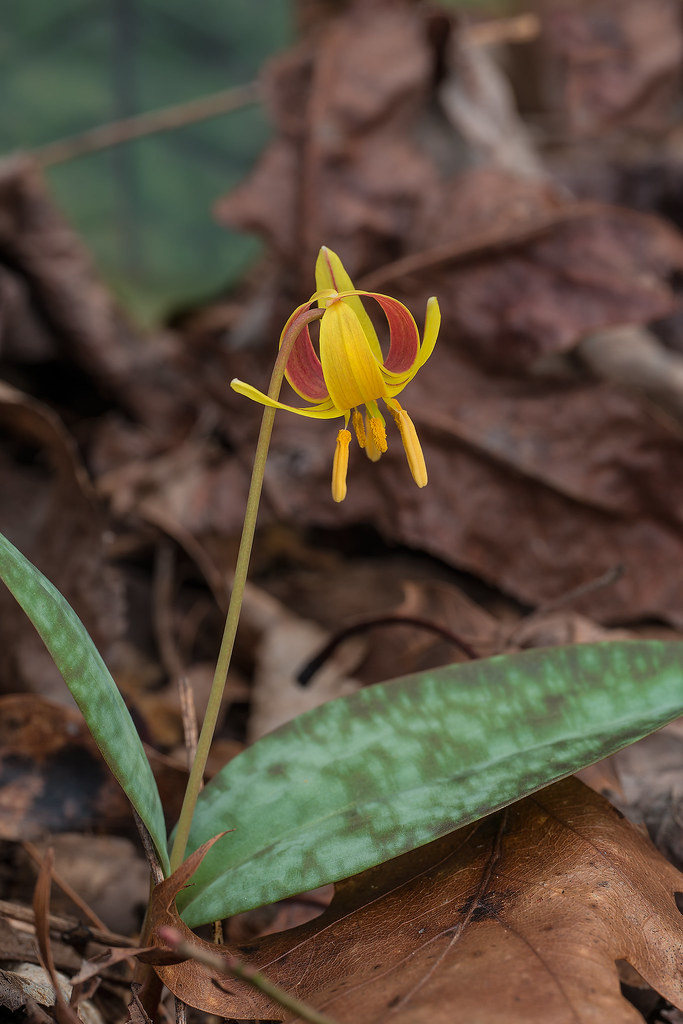 One of the things you might notice about the flowers in these images is that some of the flowers produce yellow stamens while others produce reddish-brown or purple stamens. At one time, when I was just getting started with wildflower photography (many, many moons ago…), I was told that the difference in stamen color meant I was looking at two different Erythonium species. Well, that is not the case. The color difference is just a variability which this species produces. Having said that, some of you might be familiar with Erythronium umbilicatum species in other parts of the Southeast, and your favorite sites may contain flowers which produce just one color of stamens. That’s fine. It just so happens that the several sites in the upstate of South Carolina produce a variety of colored stamens.

The common name, Dimpled Trout Lily, comes from the “dimple” found on the apex of the seed capsule. Here is an image that shows the seed capsule hanging down and almost touching the ground: 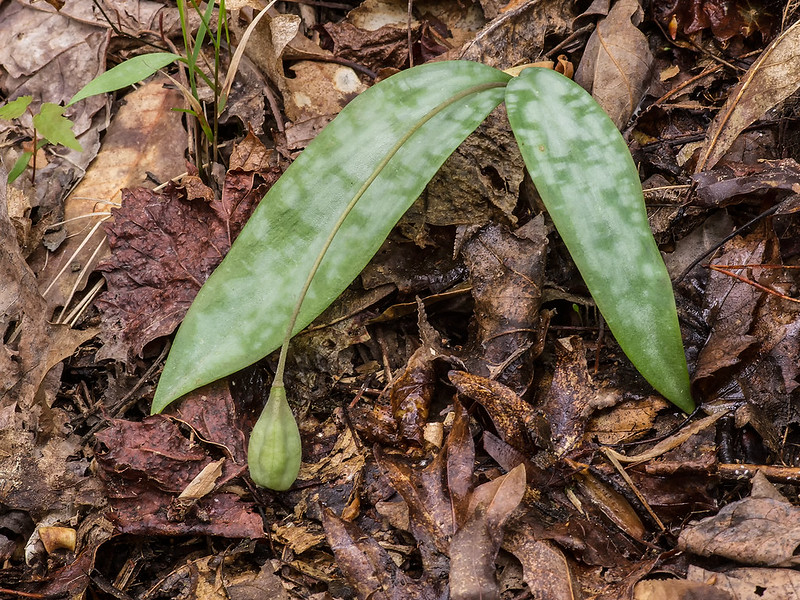 The association of “Trout” with the common name comes from the resemblance of the pattern on the leaves with that of the pattern found on our local freshwater brook trout population.

The plant sprouts, in early Spring, from a small, white bulb which is shaped somewhat like a dog’s tooth, which signifies another name for this species: Dog-tooth Violet (although it is definitely not a violet): 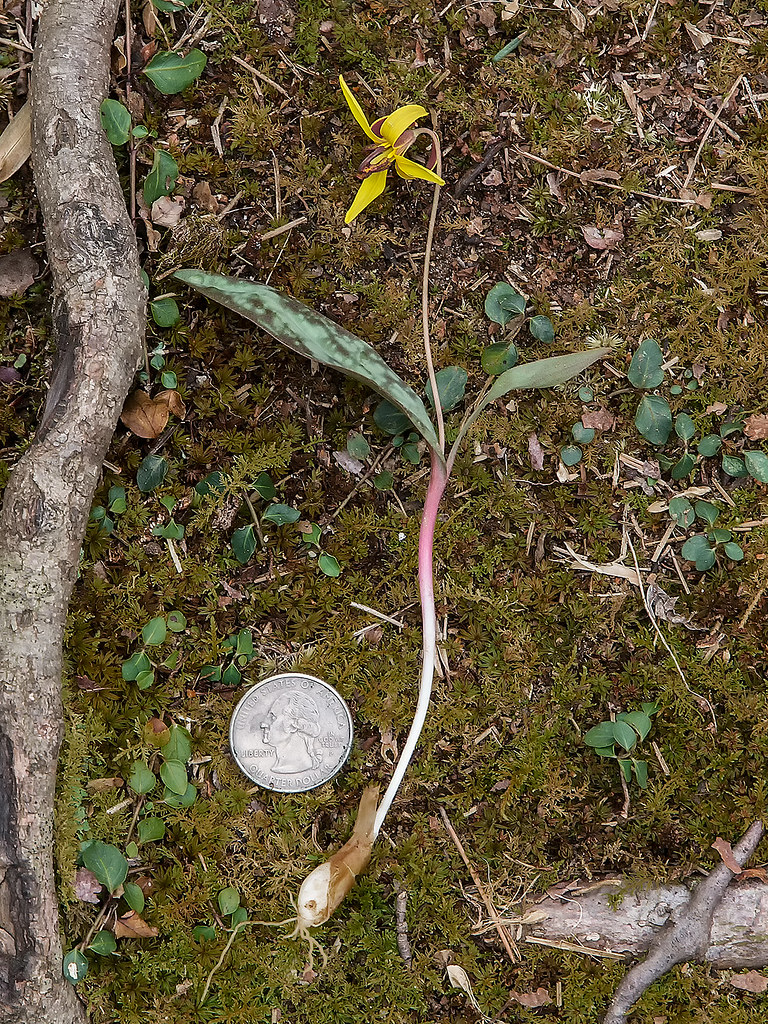 The flowers do not open except under high sunlight conditions, so we made sure we didn’t get there too early in the day. Even with the hazy overcast, the flowers were fully open for us. Fortunately for Walter and me, many of the flowers were growing on a hillside, so we were able to show the stigma and stamens in some of our images. Otherwise, we literally would have to have our cameras on the ground to show these flower parts. Here are some of the remaining images I took on this brief field trip:

I do have my quirks… one of these is to find an example of a flower which is casting a profile shadow on one of its leaves. I have always found this interesting, and I try to capture an example of this each time I photograph these Trout Lily flowers at Nine Times Preserve. Here is my best example of the day: 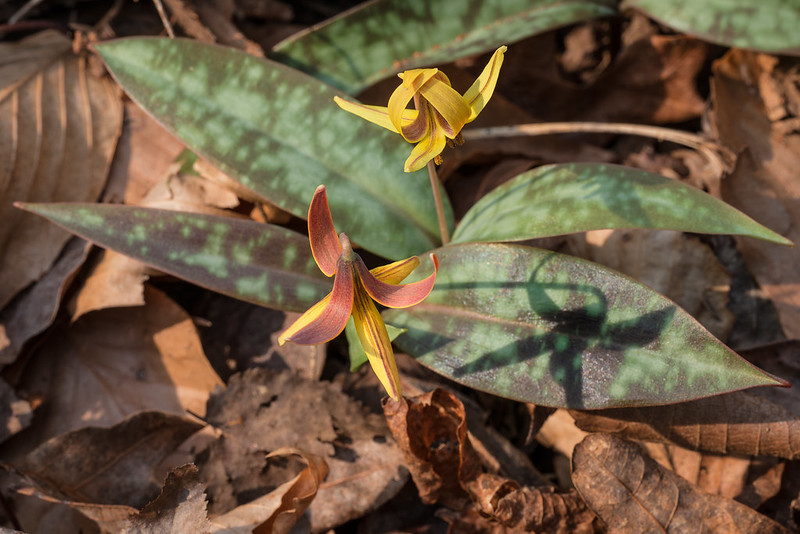 There were a few grouping of several flowers, but for the most part, the plants are single plants and not clumps. Here is one of the groups we saw. Here, you can see examples of flowers with both yellow and reddish-brown stamens within the group: 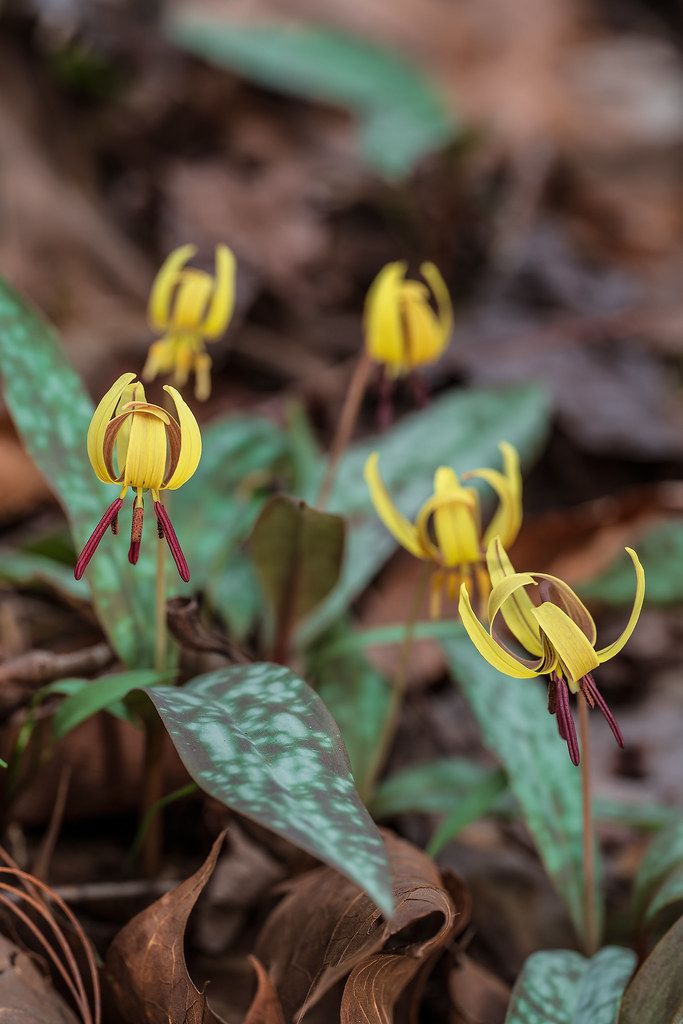 Finally, here is a rather unusually shaped flower. I liked it because of the circular curl of the sepals and the downward pointing petals. I didn’t see another one like it on this trip: 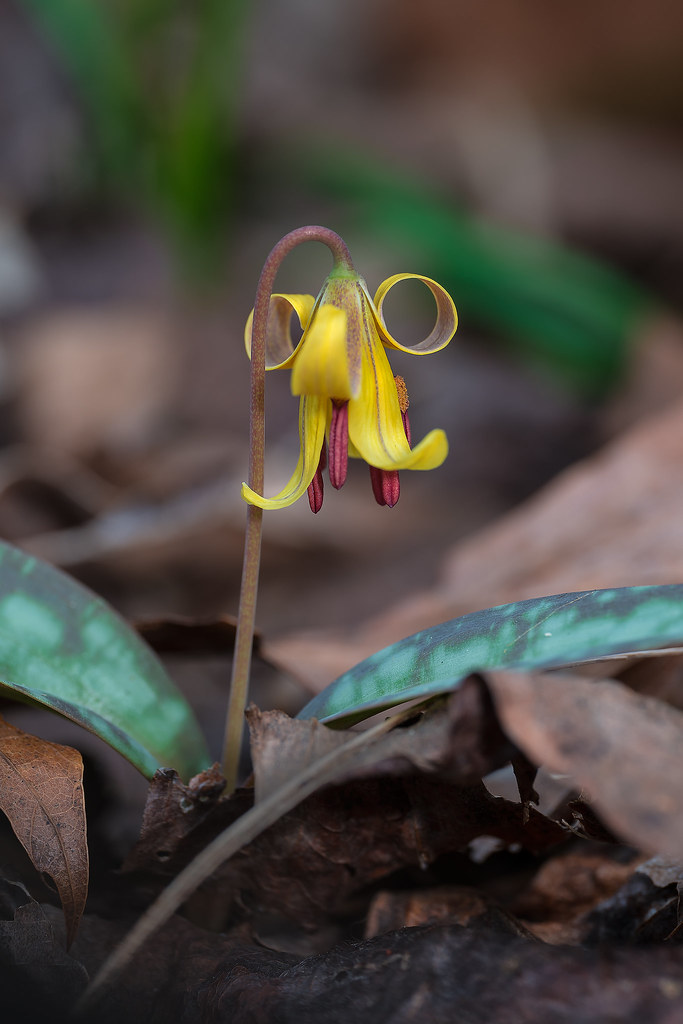 Not a bad day for a quick outing in the upstate. We were fortunate to have great weather (72 degrees F — 22 degrees C) and perfect lighting for macro photography. I hope to make it back to Nine Times Preserve a few more times during Spring for some other Spring ephemerals. You never know what you might find at this wonderful site.