A few years ago, my good friend, Kelvin Taylor (aka “KT”) posted some excellent images of Trillium pusillum or Carolina Least Trillium which he had been studying at a preserve called Turkey Creek Preserve near the small town of Middlesex, Nash County, North Carolina. This is not a Trillium species that I see with any frequency at all. In fact, it had been many years since I had been fortunate enough to photograph it, or ones like it. We also found a number of Neottia bifolia or Southern Twayblade orchids. This orchid has been renamed from Listera australis a bit ago as all of the plants in the genus, Listera had been moved to Neottia for reasons known only to the taxonomists… In a minute, I’ll attempt to explain the problems associated with naming the Trillium species we saw, but for now, here are examples of the two target species: 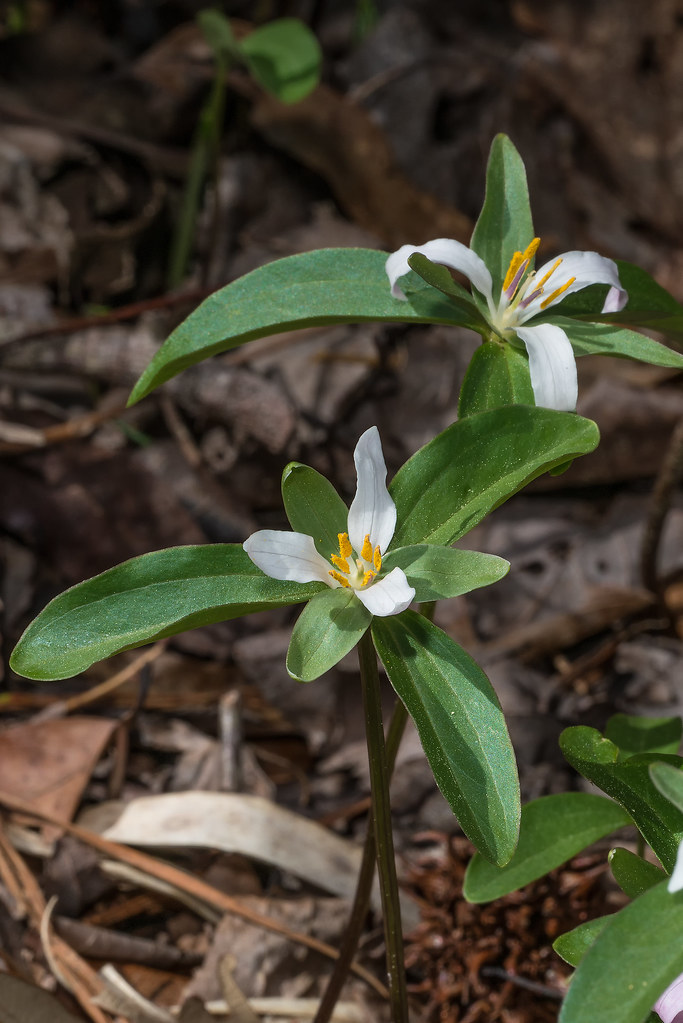 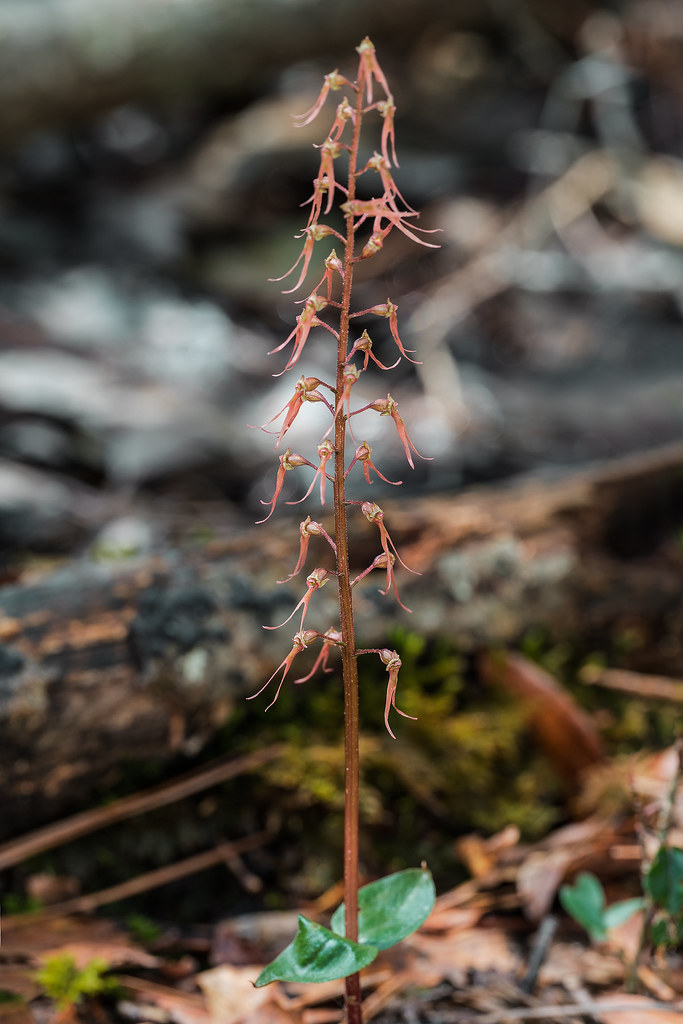 As I mentioned, the Trillium pusillum complex is a hot mess. This is a species (or several species, depending on which side of the bed you arose from this morning) which appear as spotty, disjunct populations in 13 states in the Southeast from Texas and Oklahoma to Maryland, and from Arkansas to Georgia and the Carolinas. Some of the populations have, probably for good reason, been raised to species status, while others have retained varietal status. Much work needs to be done to sort out the differences, if any, in the remaining populations. There is currently an on-going process being performed by several noted botanists to try to accomplish this.

For now, I’m using the name, Trillium pusillum, without a varietal notation to identify what we saw on our recent field trip. I hope this makes clear (as mud) the status of these plants at this site.

I don’t know a lot about the history of the site, but apparently its botanical importance was discovered by the owner many years ago. As I understand it, the owner wished to dispose of the property, but in order to protect the plants, the owner sold the property to a chapter of The Humane Society. Why not The Nature Conservancy or The North Carolina Land Trust, or some other conservation organization in North Carolina? I do not know the answer, but for now, at least, the land is being looked after by an active caretaker. He has mowed an area which was normally very much overgrown, resulting in many thousands of Trillium plants flourishing thanks to the lack of overgrown, vegetative competition. Kudos to the caretaker!

I left home at 5:30 am in order to arrive at a relatively decent hour. It was a 4.5-hour trip for me, so I didn’t want to get there too late. KT explained that there were two others joining us: Morgan-Ashley Miller, a recent graduate of NC State University, and Garrett Sharpe, a graduate student at the University of North Carolina at Chapel Hill. Both were interested in seeing what the site had to offer.

My arrival was around 10:00 am, just in time to meet KT at the site. The other two would arrive about an hour later. KT had told me that there would be many Trillium plants there, but he did not prepare me for the thousands of plants, many in clumps of a couple of dozen or more, that were in full bloom! I was suddenly without words! The population stretched from the large, mowed area close to the road and into the open areas within the woods. This site is what I would call a bottomland forest with isolated depressions that retain water for a portion of the year. The Trillium do not grow in the water, but they do grow along the more dry, raised areas next to the depressions. It was very mucky in places, but I managed to keep my feet dry for most of the day.

We spent a couple of hours roaming around trying to find the best specimens to photograph. It was a challenge because there were so many blooming plants to choose from. Here is a sample of the many dozens of images I took of this dainty little Trillium:

Note a couple of things in the image, above right. The petal width is variable on the flowers at this site. This one is quite narrow. Also note the single-leaved plants nearby. These are juvenile Trillium plants which produce only a single leaf for a couple of years before producing the typical, three leaves. Actually, these are not leaves, but they are bracts. I understand that it takes 5-7 years from seed for a plant to produce a flower.

As with a few other Trillium species, the petals turn pinkish purple as the flowers age. Because the population at Turkey Creek had just gotten started blooming, I had to search to find some of the first flowers to open, and the petals were, indeed, turning color: 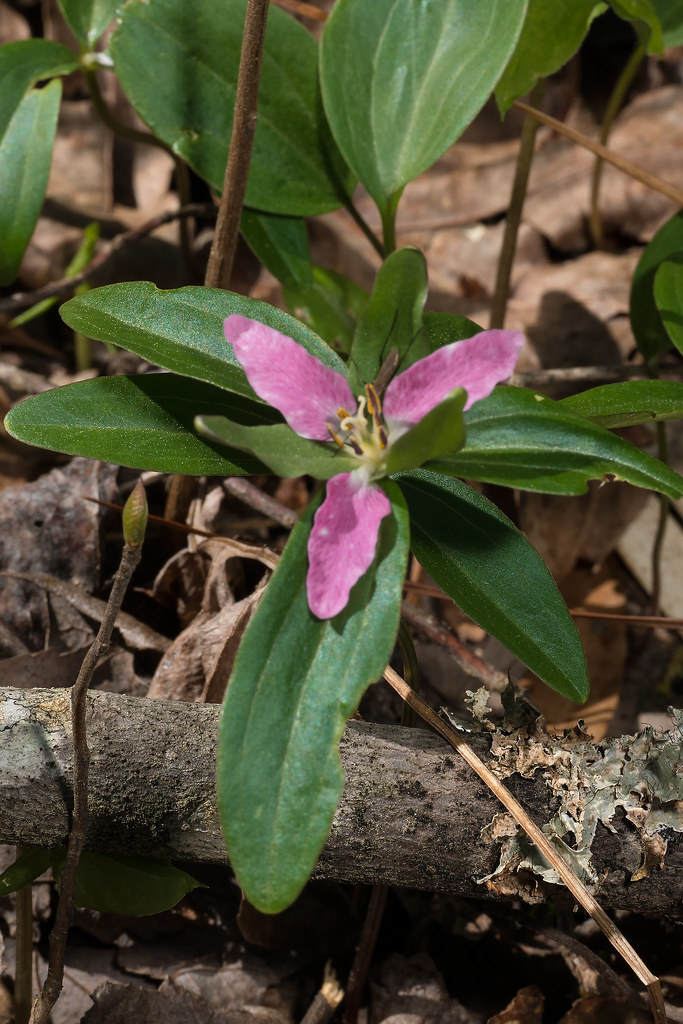 Here are a few images of the clumps that were scattered all over the area. Many had dozens of blooming flowers: 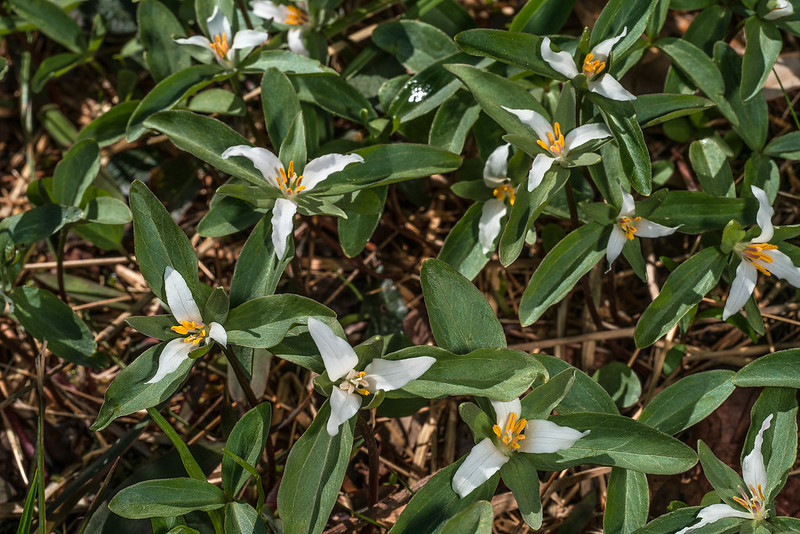 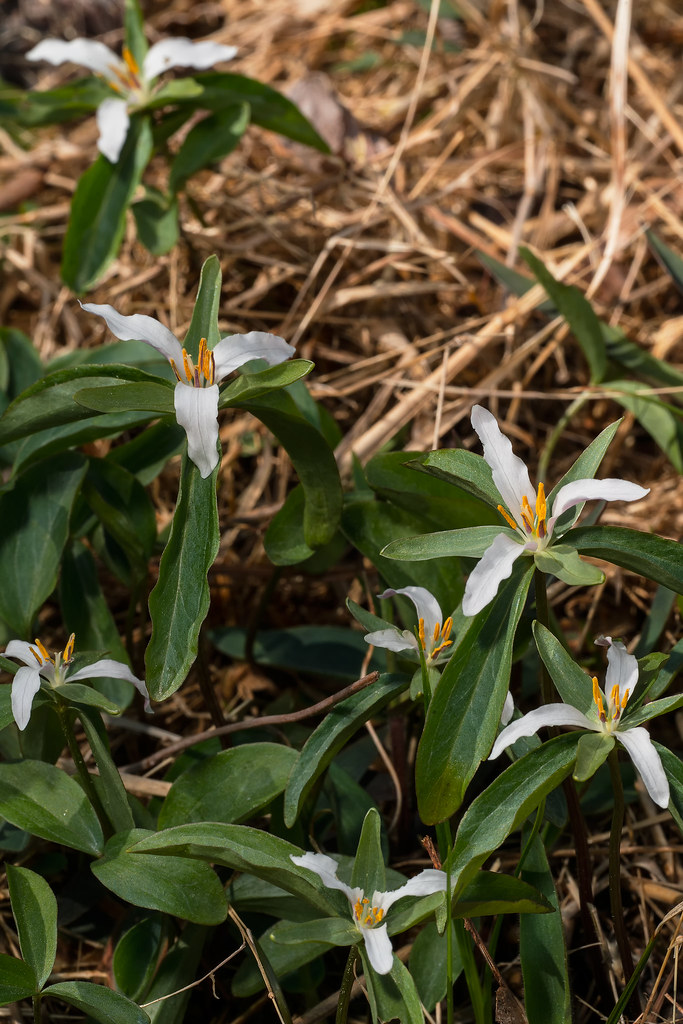 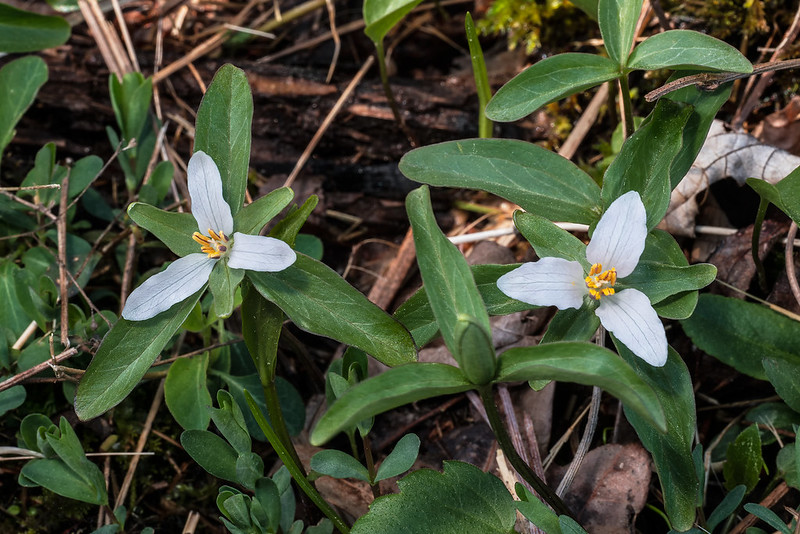 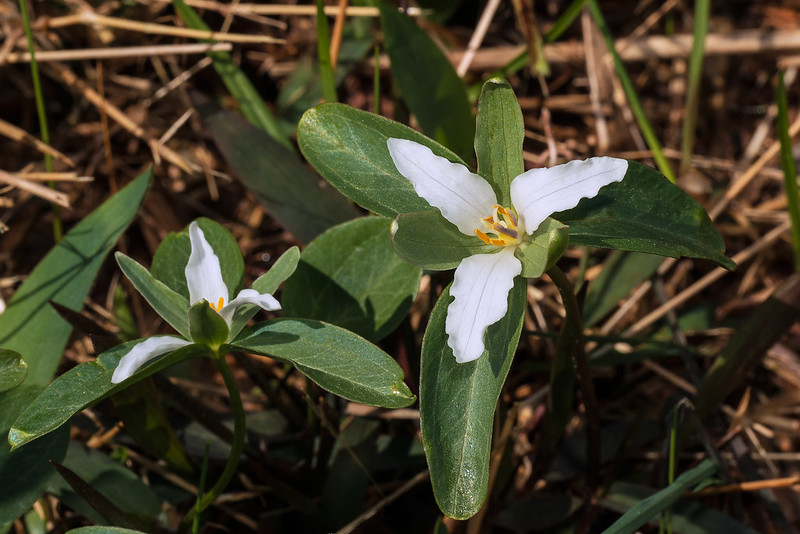 KT also took us to a few spots in the preserve which were home to the orchid, Neottia bifolia or Southern Twayblade orchid. I’ve seen it in flower along the Coastal plain of the Carolinas as early as late February, but it was great to see it in a different setting. It can be found along most the states in the East Coast of the US, and along the Gulf Coast from Florida to Texas. In no places is it what anyone would characterize as “plentiful”, but with careful searching in wet areas associated with acidic soils and pine trees, it could be found. It’s probably a bit more plentiful than is stated, but it is so very difficult to spot against the leaf litter of the forest. And, accordingly, it is a challenge to photograph. What I have to do to locate the plants is to search for the two green leaves that are opposite on the stem toward the base of the plant. Those are usually pretty easy to spot against the leaf litter. Here are some examples of the plants KT showed us: 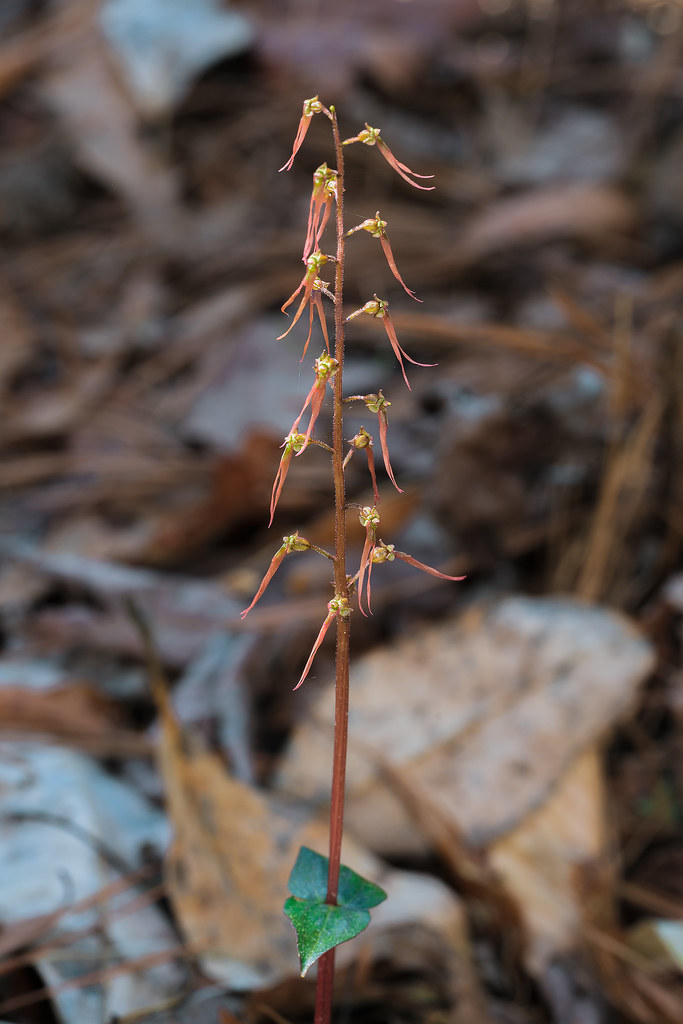 KT also pointed out several other wildflower species. One of these was one which I would have expected in such an environment: The rather large, white flowers of Zephyranthes atamasca or Atamasco Lily:

Nearby, I spotted dozens of Arisaema triphyllum or Jack-in-the-Pulpit, one of which was just coming into bloom: 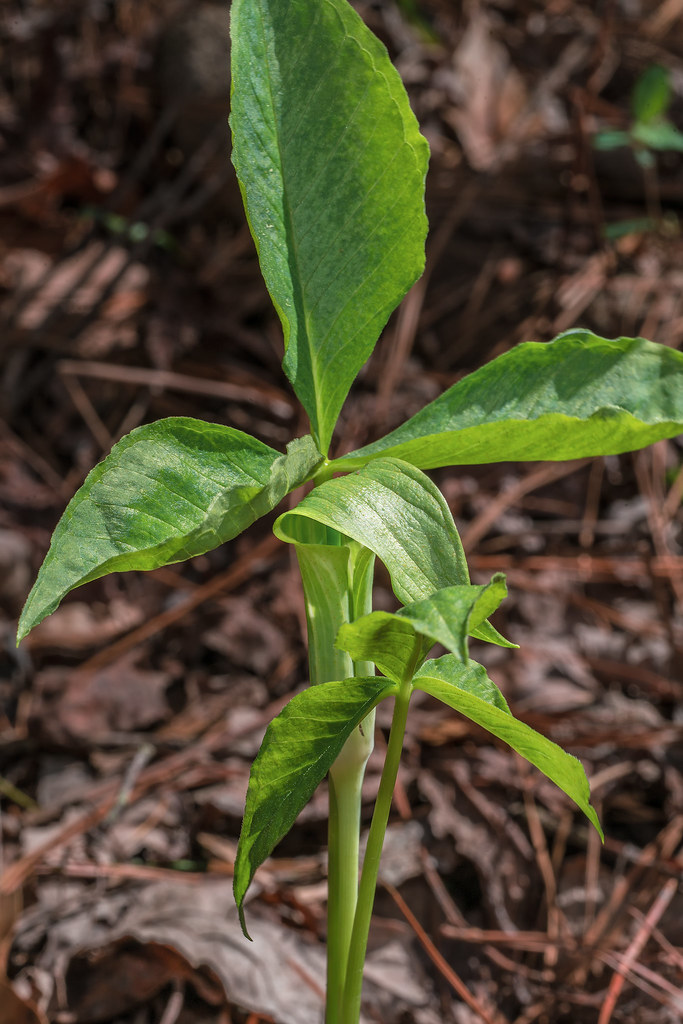 And finally, KT found a very unusual fern species: Ophioglossum vulgatum or Southern Adder’s-tongue Fern. Doesn’t look much like your typical Fern, does it? But it is recorded from about 25 states — mainly in wet depressions: 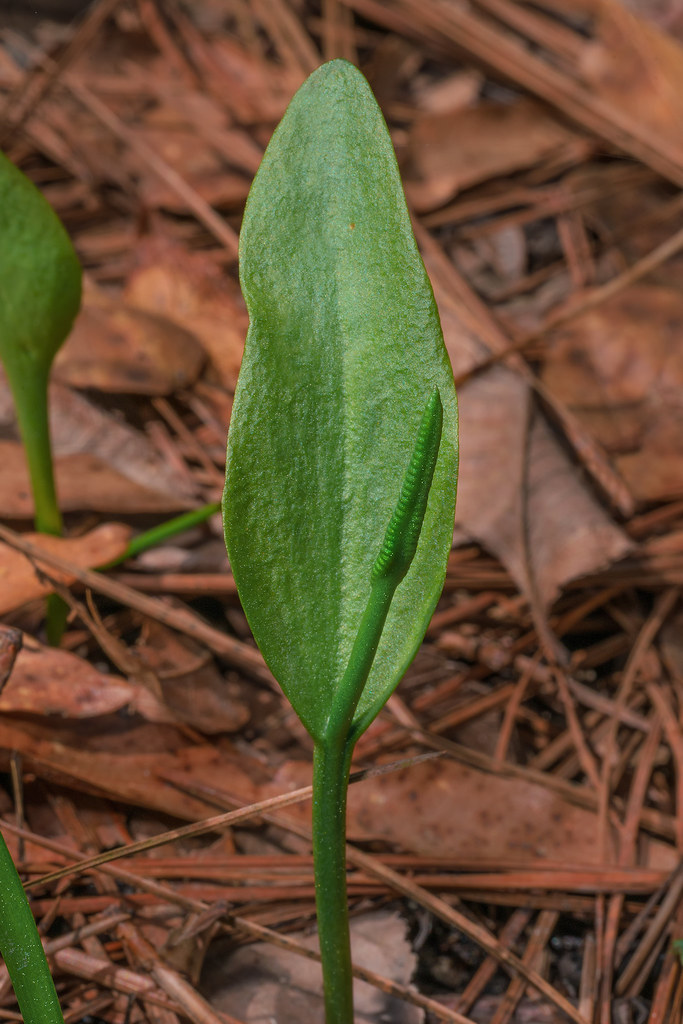 It was a long day for me, and I even considered renting a motel room for the night so that I wouldn’t have to drive home after dark. But we finished up around lunch time, and KT and I went to a Subway store about 10 minutes away for a much-needed meal. We were both very hungry from our morning field trip. It was nice to meet Morgan-Ashley and Garrett, and especially nice to see KT again. We were last together in the field in early fall in the Green Swamp Preserve, Brunswick County, North Carolina. I really appreciate my friends who don’t mind my tagging along with them when they visit some of these super botanical sites in the Southeast. We are lucky to live near so many wonderful places to visit and photograph nature.

There are a few nice field trips planned for the near future — you don’t want to miss them!