The morning broke calm but cloudy with a slight chance of precipitation in the late afternoon. It was the time for the Yellow Lady’s-slipper orchids to be blooming just north of us in the DuPont State Forest near Cedar Mountain, North Carolina. I have photographed them during this time of year for several bloom seasons. So, I asked Walter Ezell if he would like to join me on a day trip “up the mountain” to see them.

There are two varieties of these yellow orchids in the Carolinas: Cypripedium parviflorum var. parviflorum or the Small Yellow Lady’s-slipper orchid and Cypripedium parviflorum var. pubescens or the Large Yellow Lady’s-slipper orchid. In our region, they are fairly easy to separate, with the Small YLS having a darker, reddish set of petals and sepals, and the Large YLS having a lighter, greenish set of petals and sepals. Of course, the size varies, but the Small YSL is considerably smaller, sometimes by half than the Large YSL. 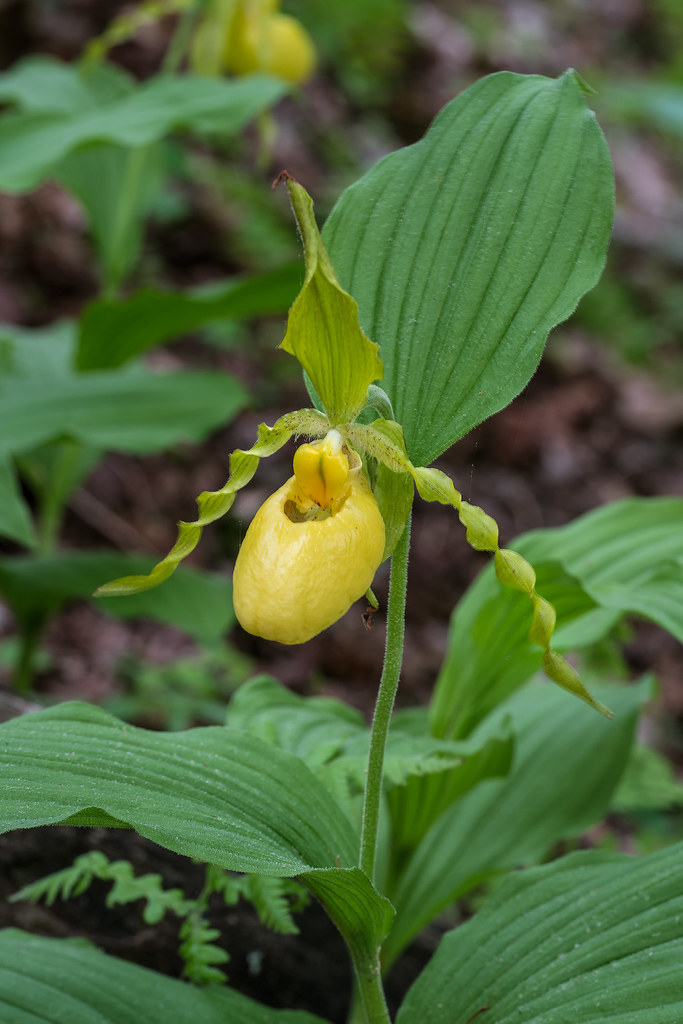 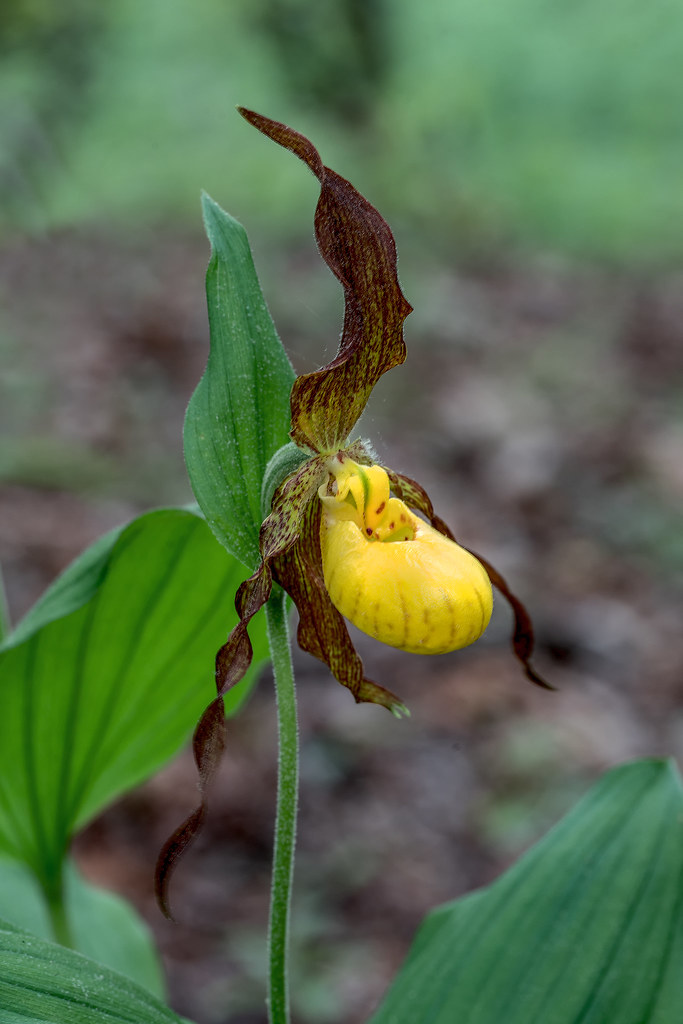 But, before we arrived at DuPont State Forest, we were heading up US Hwy. 276 from our home in Greenville, SC. There is a spot on that very curvy road where I like to stop and check out the flora in a rich cove area where I’ve seen a number of interesting and beautiful wildflowers in season. One of these is Aplectrum hyemale or Puttyroot orchid. A week or so ago, I had stopped along the roadside, and I had found several of the Puttyroot orchid leaves — it produces a single leaf per plant. They poke up out of the ground in late October or early November just in time to begin catching the light that filters through the open canopy. With the deciduous trees shedding their leaves that time of year, the orchids have a pretty good strategy to store up resources by photosynthesizing light during the winter. By the time late Spring arrives and the trees begin to leaf-out again, the orchid leaves have served their useful purpose, and they slowly wither away.

By mid-May, the plant sends up a sheathed flower spike which takes only a couple of weeks to fully mature and produce up to a couple of dozen flowers. These flowers are colored mostly yellow-green with reddish-brown petal tips. It’s pretty difficult to spot them because they are only about as tall as the surrounding vegetation. But, if you know about where to look (if you made a mental note of where the leaves were last time you saw them), then it’s not a problem.

The image on the above right shows a large flower spike, probably 4 days from being in full bloom. Notice the protective sheath below and clasping the flower spike. 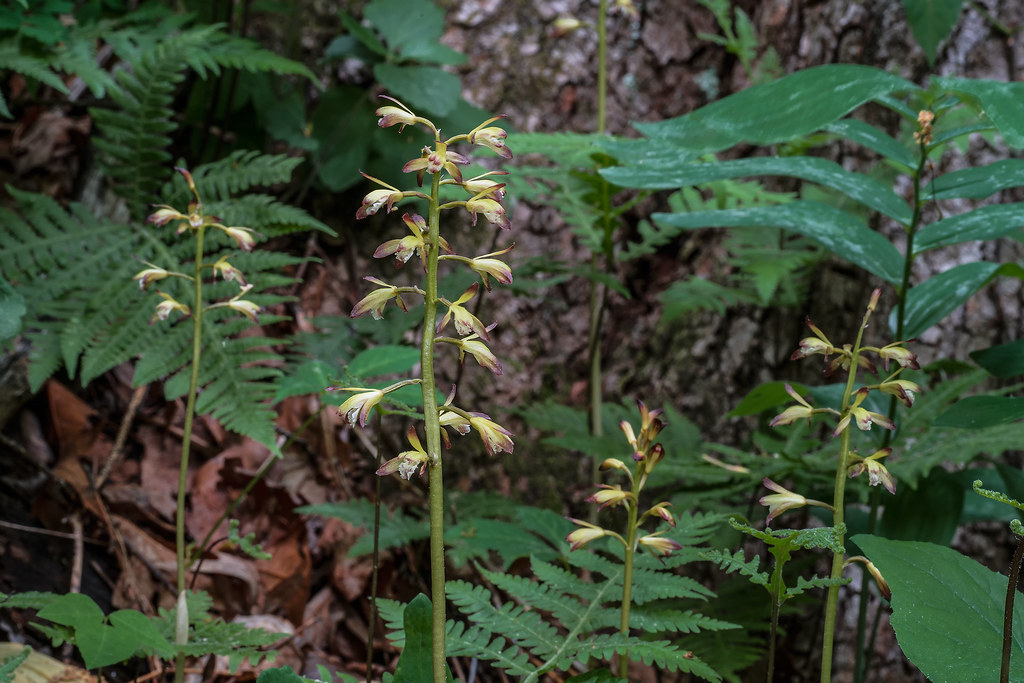 After photographing the orchids, we scoured the hillside looking for other wildflowers. We found a couple of interesting ones: first, we spotted one of the earliest Asclepias or Milkweed species to bloom in the upstate of South Carolina — Asclepias quadrifolia or Four-leaf Milkweed. Generally, the flowers are white with a light pink blush, but I have seen them entirely pink. Those that we saw on this trip were of the typical color: 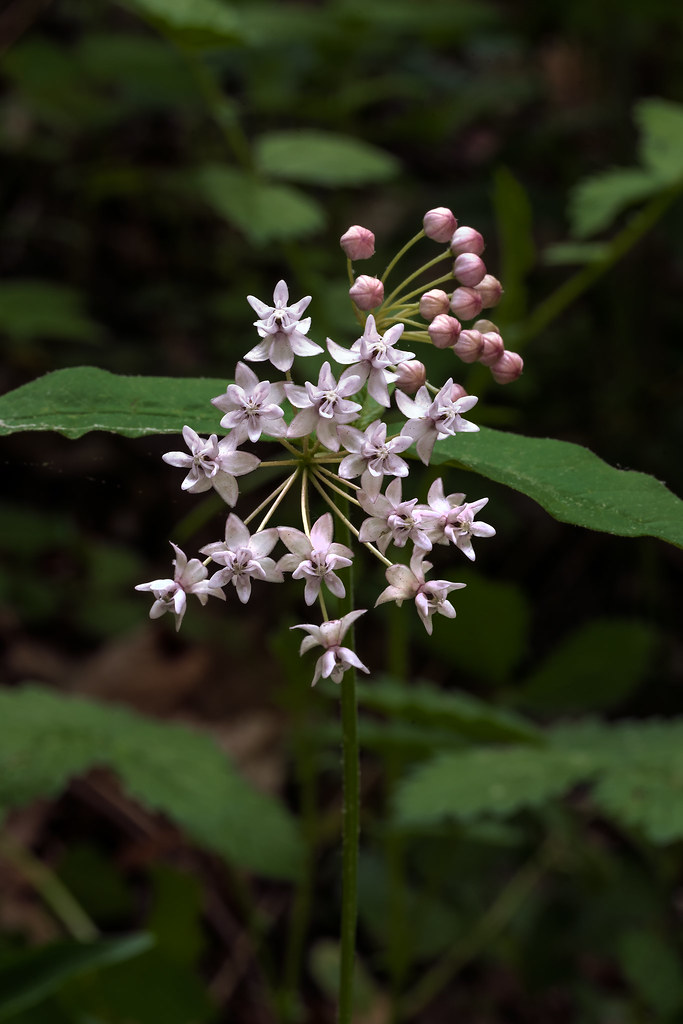 The next species we saw was Maianthemum racemosum or False Solomon’s Seal: 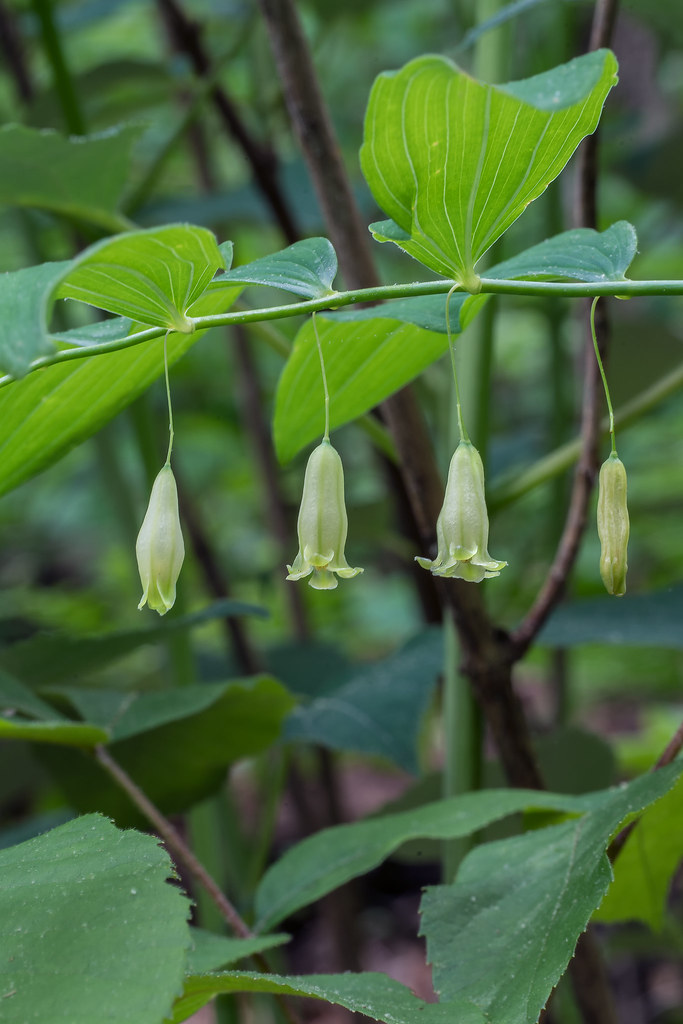 The foliage is remarkably similar, but the shape and position of the flowers clearly separate the species.

We were burning daylight, so it was time to pack up our gear and head north toward Cedar Mountain, North Carolina where we would enter DuPont State Forest. This is a wonderfully rich area and is usually crammed with hikers, bikers, and people with their horses and dogs. It is also the home of quite a few marvelous waterfalls. The only possible downside to photographing wildflowers on the trail (of which there are many dozens of them winding through the Forest), is the mountain biker traffic. I have experienced that they are courteous and well-behaved, announcing their pending arrival along the trail as they approach. For the most part, the best wildflower photography is off-trail, but sometimes, I find my butt sticking out into biker traffic just at the wrong time! But it is not a big problem at all. In fact, it is good to see the bikers, and they often ask what we are photographing. This gives us an opportunity to share a bit of botany with them.

We pulled into the parking lot of one of the access points, parked, and gathered our gear. Just as we were about to head to the trailhead, a lady who had been standing with two other people asked if I was Jim Fowler. I get that a lot when I am out — especially in the North Carolina mountains. I said “Yes, that’s me!”, and she identified herself as Dottie, one of my blog followers. She, and the other lady who was with her group told us that they had just seen several groups of both Small YLS and Large YLS near the trail, and that the Large YLS were, for the most part, going past peak bloom. That is understandable, because they come into bloom about a week before the Small YLS. That was OK with us. We figured that there might just be a few of the Large YLS that were holding on just for our visit. We chatted for a few minutes, then parted company and headed toward the trail head.

We had not been on the trail very long, when we spotted a few Large YLS uphill next to the trail. I checked them out, and sure enough, they had already begun to shrivel and turn brown. Bummer! But there were more ahead to check out. We soon reached the spot where I had seen some Small YLS in past years, and there they were — a small group of three plants. Now, you folks in the Great White North (you know who you are), who have these huge masses of this orchid species will just have to humor me, because this far south, we are plenty satisfied to see the small groups and single plants that bloom for us. ‘Nuf said about that!

We proceeded to set up the photo shoot, clearing away extra leaves and dead branches to make for a more satisfying shot. Here is the result at this first location of the Small YLS flowers: 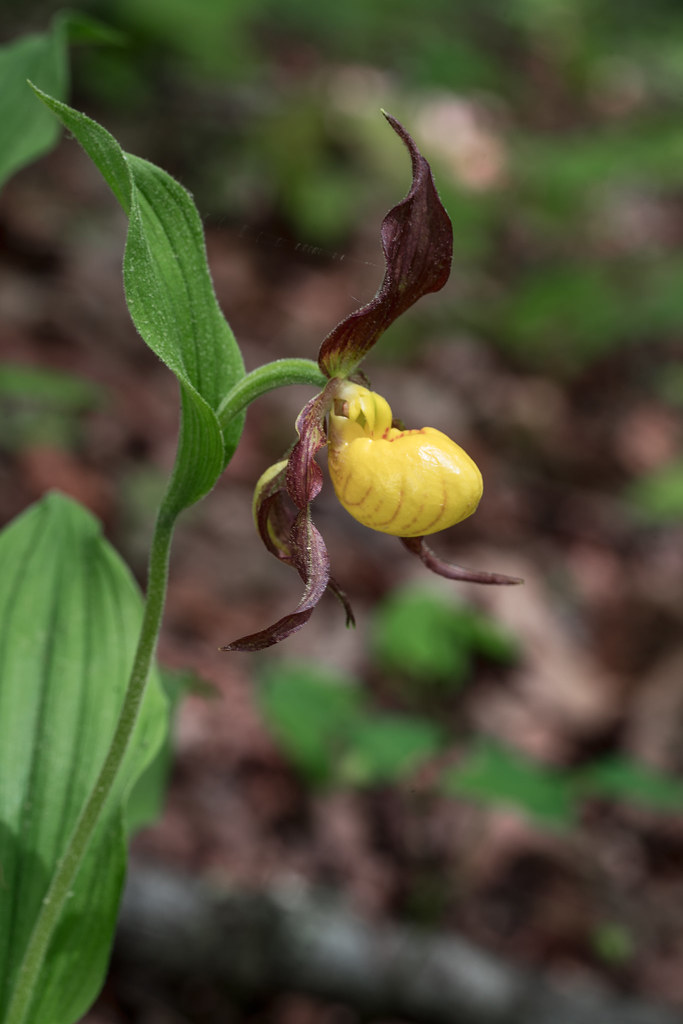 The yellow pouch on this orchid was about 1 inch (2.5 cm) long, and I found the dark, reddish-brown color of the sepals and petals to be very attractive.

Farther on down the trail, we spotted a few of the Large YLS, but again, they were past peak bloom and not very pretty to look at. But the Small YLS were in perfect shape. Here are some more of those: 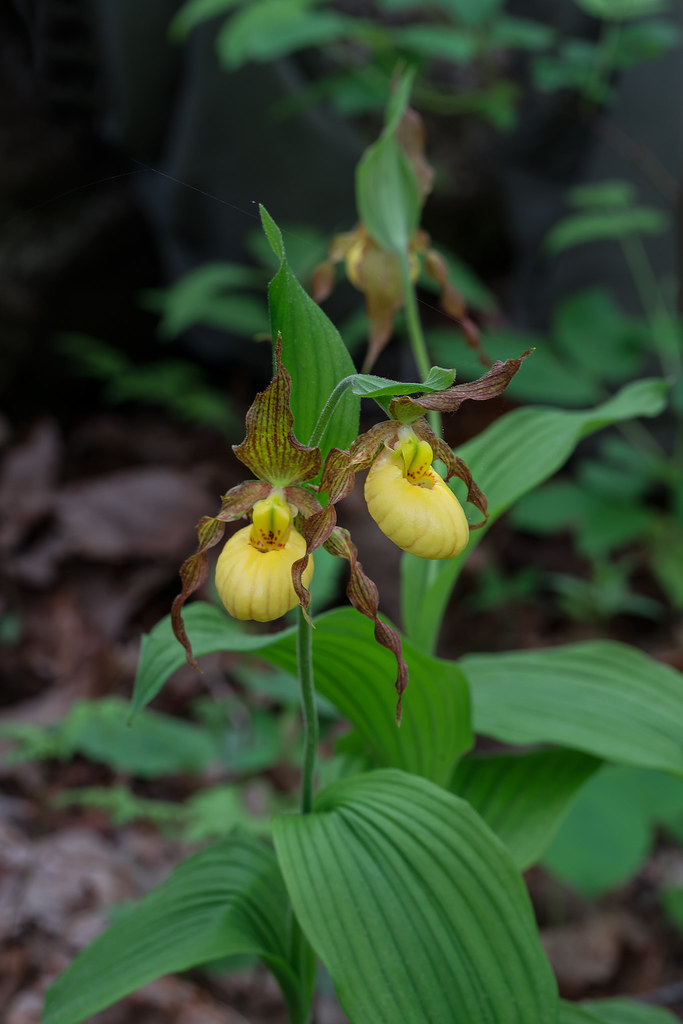 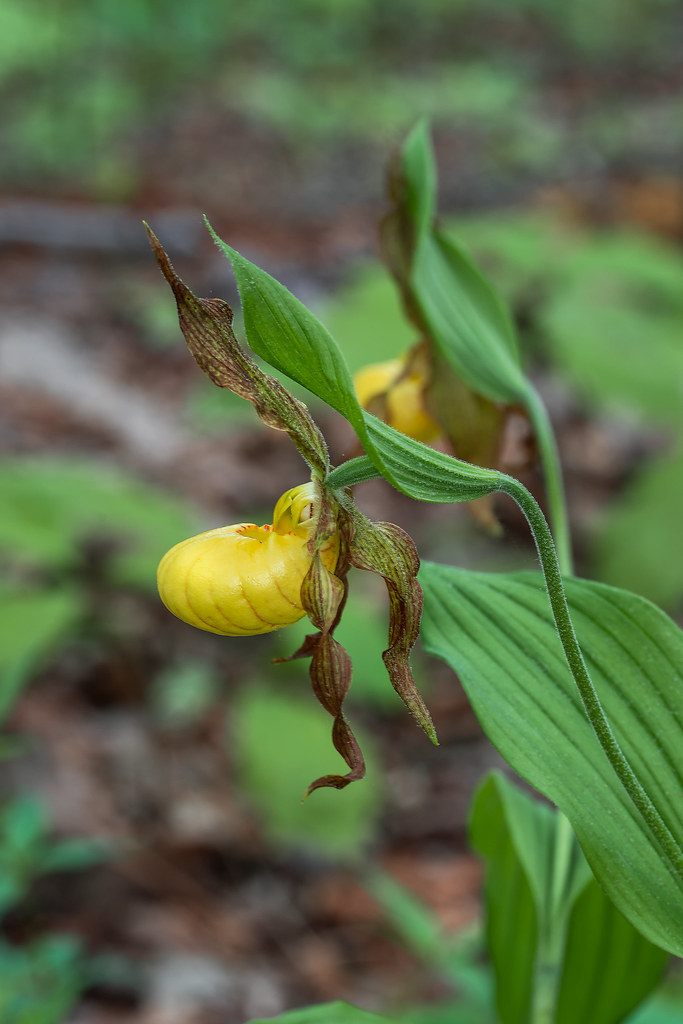 Along the trail, I spotted a small group of Orobanche uniflora or One-flower Broomrape. I had seen it here several years ago, but I didn’t think I’d ever see it again in the same spot. As with others in the genus, Orobanche, it is a parasitic plant. According to Wikipedia, “It is native to much of North America, where it is a parasitic plant, tapping nutrients from many other species of plants, including those in the families Asteraceae and Saxifragaceae and in the genus Sedum. The name “orobanche” can be translated to “vetch-strangler” and “uniflora” can be translated to “single-flower”. I have seen images of purple flowers and yellow flowers, but all the ones I’ve seen are white with purple hairs over the inside of the corolla. Here are some samples: 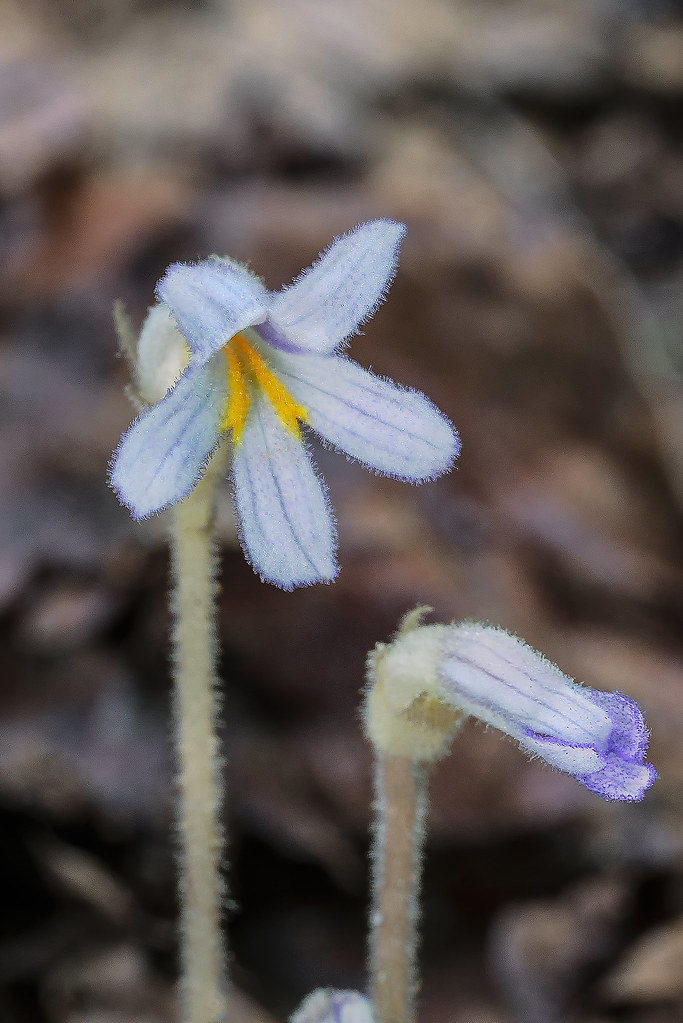 After walking about a mile down the trail, I finally spotted a small group of 4 or 5 Large YLS plants in full bloom just down a steep hillside. From this perspective on the trail above, I couldn’t tell if they were in decent shape or not, but I had to check them out. So, sliding down the hillside, not so gracefully, I finally regained what was left of my composure as I reached the plants. They were in super shape! Thank goodness! I set up my camera gear and began the shoot. Here is what I got: 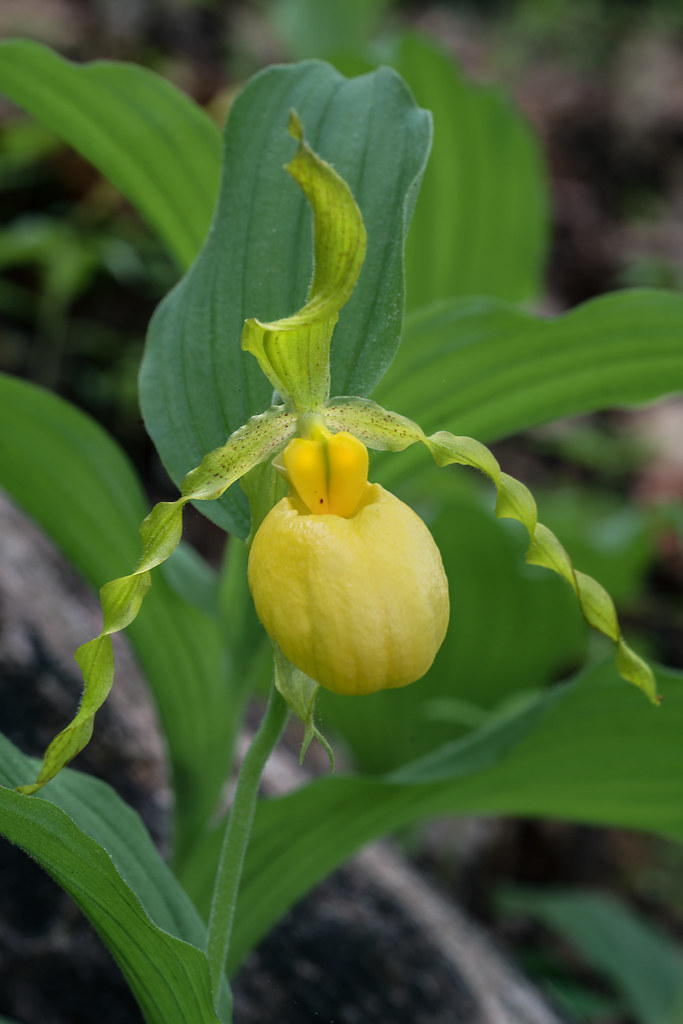 Well, we were pretty satisfied with the day’s progress, but there was another site I wanted to visit, seeing as how the Puttyroot orchids were doing so well on the hillside on our way up the mountain. This site was a relatively new one to me, and I had photographed the orchids at this site last year. I had high hopes, but you never know when it comes to orchids — here one day; gone the next — sometimes for a couple of years; sometimes forever. This is the same spot where I recently photographed the to-be-named form of Trillium catesbaei we lovingly call, “Jones Gap Trillium“. HERE is the blog report for that one.

So, we made it over to the site which is spitting distance from the North Carolina border but still in South Carolina. I parked the truck, we gathered our gear and headed up the steep trail. When we reached the spot where I had seen the orchids, there they were. A few of them were actually visible although there was much undergrowth nearby. I located a few of the best ones and proceeded to photograph them. Unfortunately, the undergrowth I just mentioned is Urtica dioica or Stinging Nettle. Not much to look at, but boy howdy!, when you brush up against it with exposed skin, it’s like thousands of needle pricks that sting like crazy. Those fine little needle/hairs filled with histamine and other chemicals really do a job on your body. They even managed to puncture my heavy blue jeans! After becoming more cautious, I managed to get a few shots of these really nice orchids:

Even with the stinging still in the forefront of my mind, it wasn’t a bad day at all. We set out to see the Yellow Lady’s-slippers, and we found a few more surprises along the way. That’s usually the way it goes with my field trips. I’m always open for different species on any trip I take.

I hope you enjoyed this little botanical adventure. As I stated in my previous blog post, I plan to head toward the Carolina Coastal Plain this weekend for some Lowcountry orchid species and much more.