It’s been a few years since I made the weekend trip to the Carolina Coastal Plain in mid-May, and I’m not sure why that is the case. There is so much going on down there, botanically. So, I contacted my friend, Jeff Jackson, who lives near the Francis Marion National Forest in Berkeley County, South Carolina, and asked if he had time to meet up on Saturday. He did, and so we did.

The target species for this trip, for me, were Cleistesiopsis divaricata or Large Rosebud orchid and Schwalbea americana or American Chaffseed. The latter species is quite rare in South Carolina and elsewhere. According to the US Forest Service, “American chaffseed, Schwalbea americana L., is a federally endangered hemiparasitic (a plant that obtains some nourishment from its host but also undergoes photosynthesis) herb that requires frequent fire or understory removal to persist across the landscape. Due to the disappearance of the species from over half of its range, American chaffseed was listed as an endangered species in 1992.” A few years ago, I published a blog post, HERE, about this strange plant species. 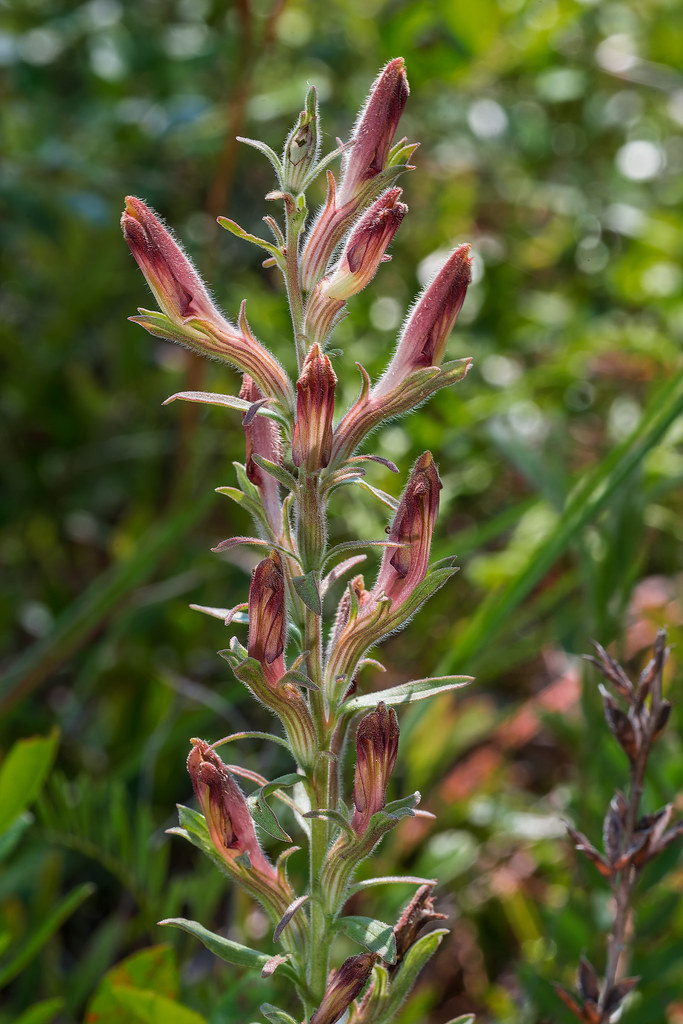 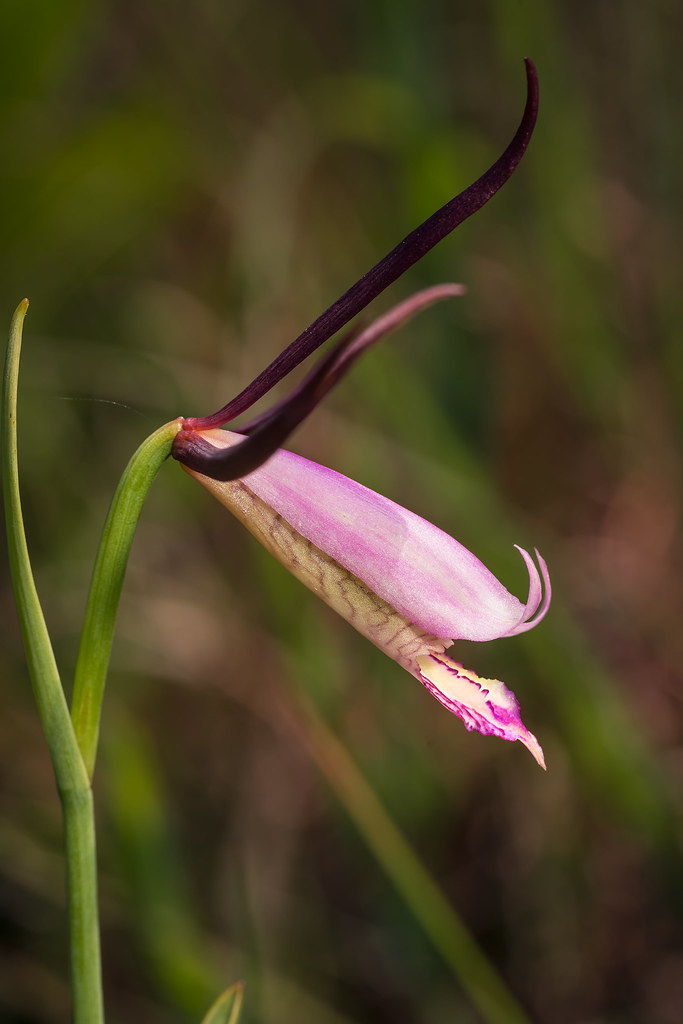 Here is a map of the eastern United States showing both historical and current distribution for Schwalbea americana: 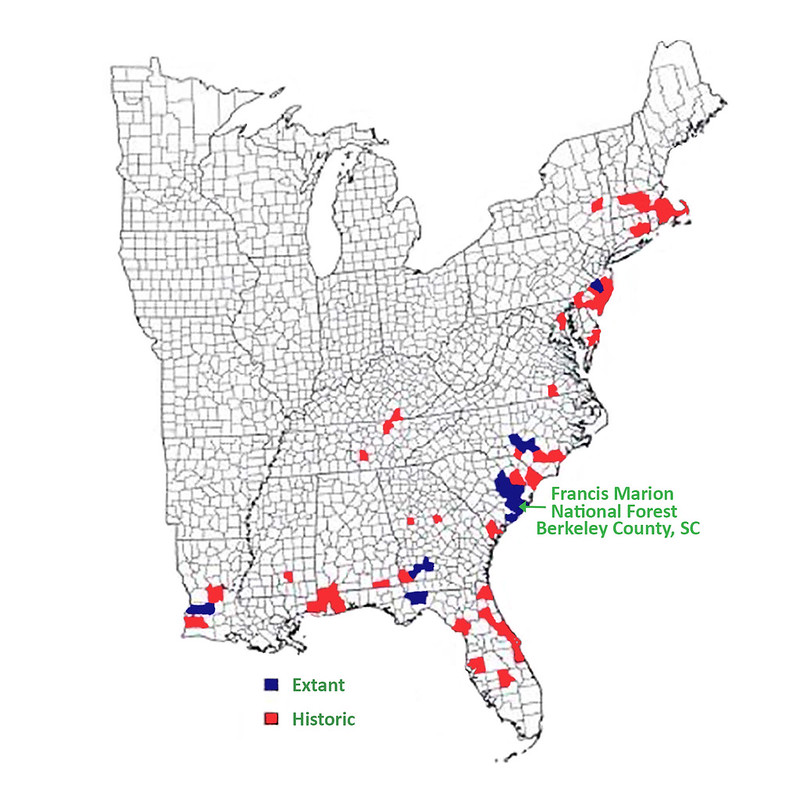 Granted, from a distance, the American Chaffseed plant is not much to look at. Even up close, it has to reach even for faint praise, but its rarity and unusually shaped and colored flowers have carved a place in my heart. The past couple of decades have seen a move toward reviving the populations in South Carolina. At Clemson University, plants have been grown from seed and then transported to select areas in the FMNF to replenish the species in areas where fire suppression and other factors have all but eliminated it. It was great to be able to find it growing just next to the mowed border of the road. It is definitely a species which depends on fire to thrive. The flowers are slightly less than 1 inch (2.54 cm) long, and the plants are about 12 inches to 15 inches (30 cm to 38 cm) tall. Here are a few more images of the roadside plants we found in bloom:

After driving the 4-hour trip down to the FMNF, Jeff and I met at a pull off not far from the American Chaffseed population that we photographed. He had gotten there before I did, and he managed to locate a few interesting flowering specimens to show me. The first of these was a beautiful, spreading bouquet of bright red-orange Asclepias tuberosus or Butterfly Weed. This is a favorite of almost all the butterflies that visit the FMNF. Being in the bright sunlight, it literally glowed! Here is the image: 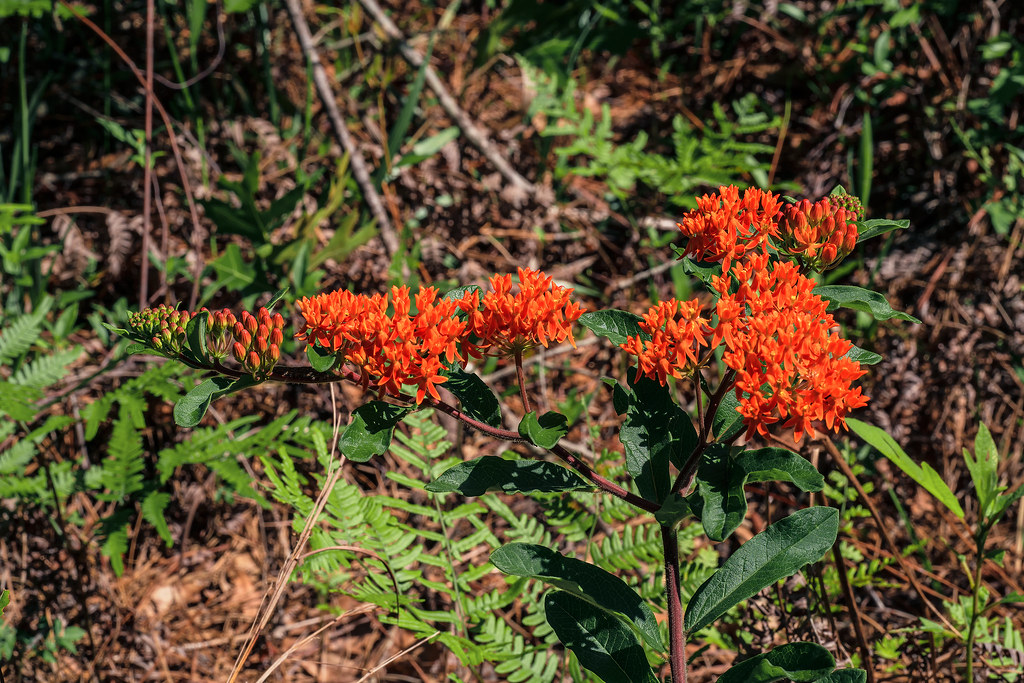 After photographing this beauty, Jeff pointed out an orchid that I have photographed only once in South Carolina — Spiranthes sylvatica or Woodland Ladies’-tresses orchid. It is quite rare in the Carolinas, and I was very happy to see it. Its preferred habitat is rather dry, shaded woods: 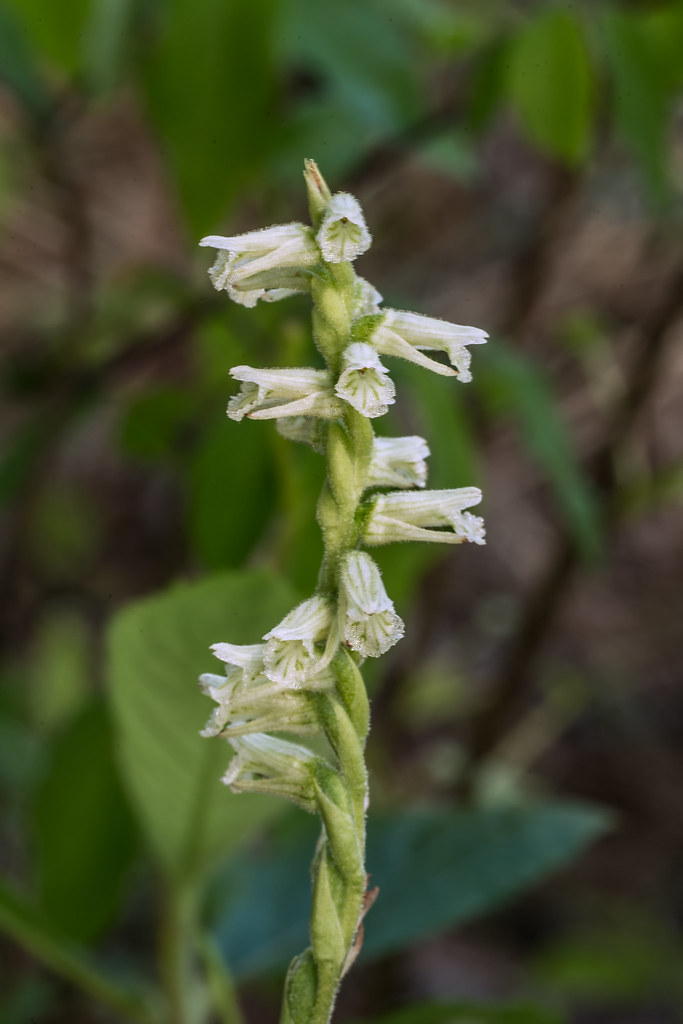 This species and its very close cousin, Spiranthes praecox or Grass-leaf Ladies’-tresses orchid, have been placed in the same taxonomic “bucket” by some who have studied it closely. The DNA are said to be identical. However, in my humble opinion, there is some work that still needs to be done to sort out the true taxonomic nature of these two species. There are some not-so-subtle differences in flower color/structure and preferred habitat that lead me to believe they are separate taxons. So, I’ll wait patiently for the outcome… Here is an image of Spiranthes praecox or Grass-leaf Ladies’-tresses orchid that I photographed just down the road, growing in a damp roadside margin in bright sunlight: 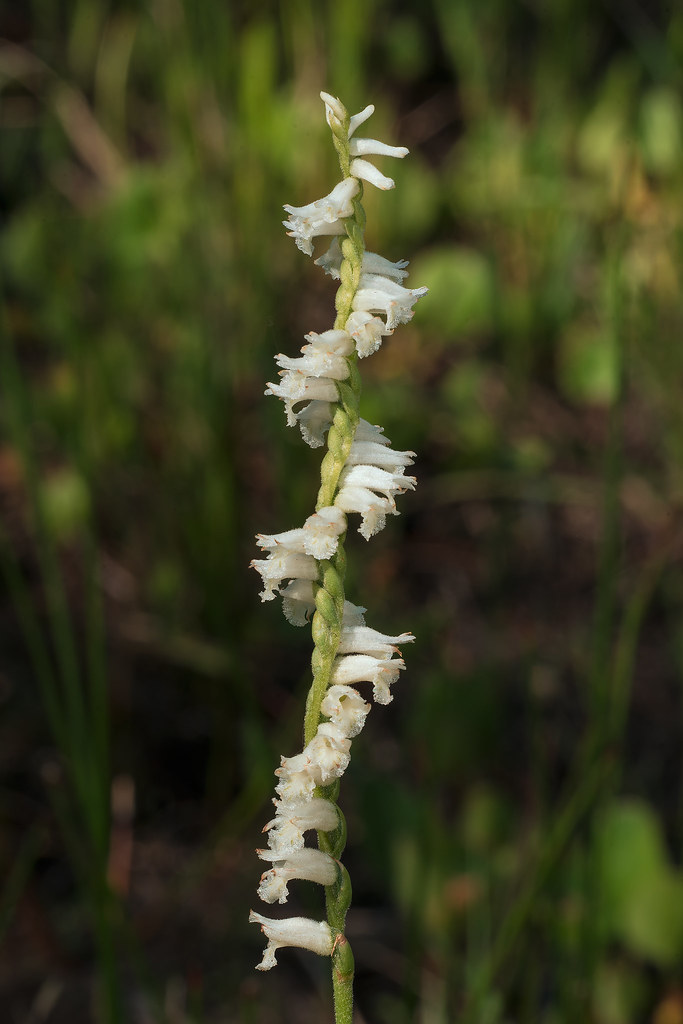 I had mentioned to Jeff my desire to see Cleistesiopsis divaricata or Large Rosebud orchid, if possible. I had seen them in flower around the first of June in the FMNF, so I didn’t know if it would be too early for them. He knew of a couple of places where a dozen or more had been in bloom around this time last year, so that’s where we set out to visit. We made our way up a narrow trail and eventually ended up at the edge of a small Carolina bay. Wikipedia has an excellent description of the formation and importance of these bays along the Atlantic seaboard, so I’ll just give you the LINK and let you peruse at your leisure.

We didn’t see any of the orchids in bloom, so we were careful about how we walked around the area searching for the plants. Finally, we managed to spot a couple of dozen plants in fairly tight bud; probably a week to 10 days from blooming. I made a mental note of the location and asked Jeff to notify me if/when he revisited the site. But, he knew of a couple of other nearby Carolina bays that might have some blooming plants. We made our way through the woods to another nearby bay. Here, we didn’t find any blooming orchids, but we did find a wonderful population of Sarracenia flava or Yellow Pitcher Plant varieties to photograph. This large population was comprised of scattered clonal colonies of plants: 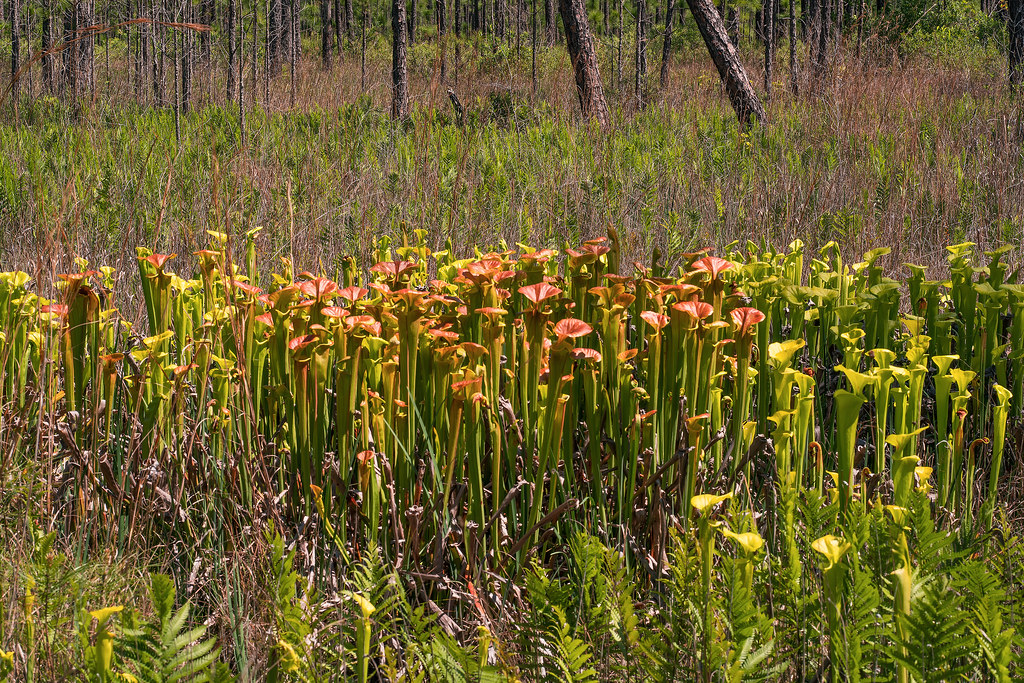 Never being willing to give up, Jeff led me to one more medium-sized bay which was across the road. Here we not only found a couple of Large Rosebud orchids in bloom, but a number of Pogonia ophioglossoides or Rose Pogonia, as well:

What would a Carolina bay be if not a home for more Pitcher Plants? At the edge of this particular bay, Jeff located an especially pleasing group of Sarracenia flava var. maxima or Yellow Pitcher Plant which has absolutely no additional markings on the pitcher or hood. It’s entirely green as were the beautiful ferns which were sprinkled liberally around the Pitcher Plants: 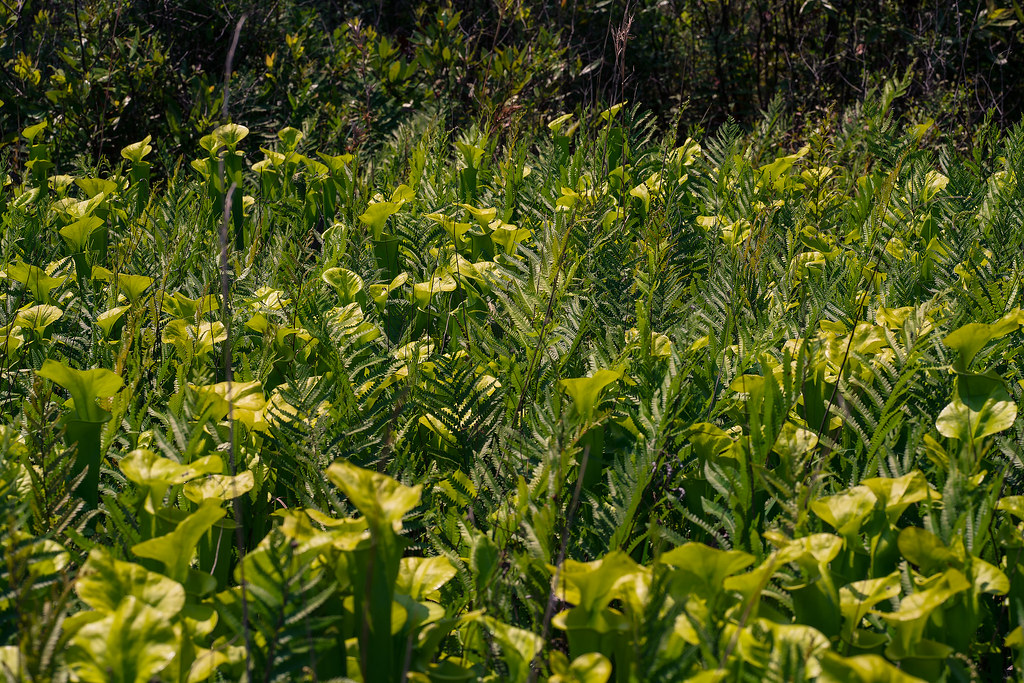 We eventually finished up at this bay and began our walk back to our vehicles which were just down the road a bit. When I entered the flat ditch separating the bay from the highway, I couldn’t help but notice the ruby-red glow of Drosera capillaris or Pink Sundew shining up from the dried mud of the ditch. What a sight to see such color in this drab environment: 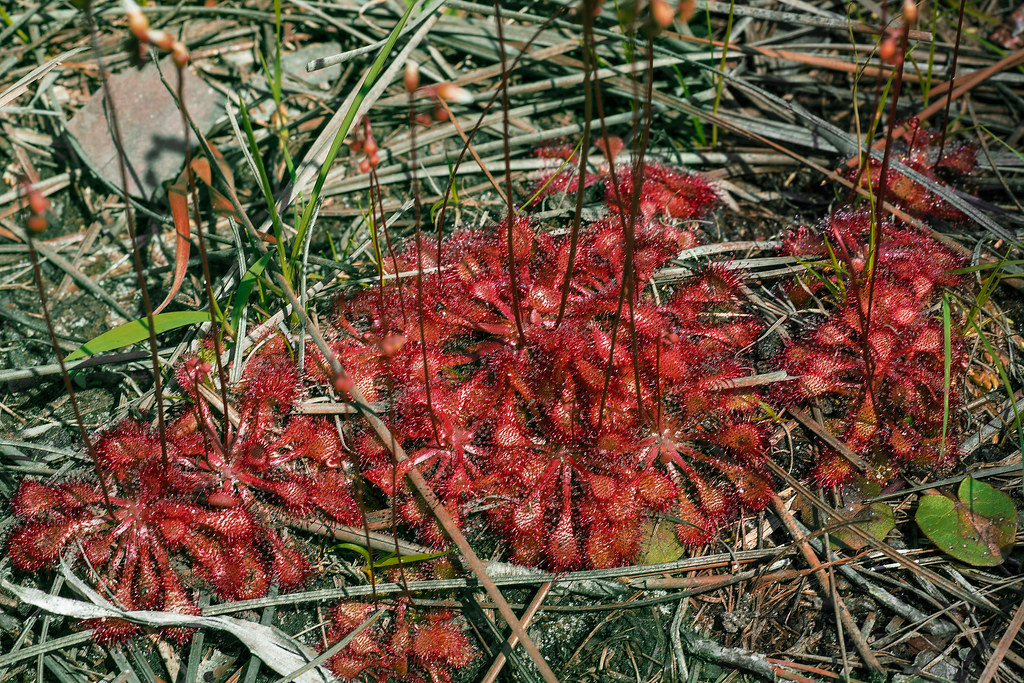 This Sundew species gets its name from the tiny, pink flowers that are held up on thin stems which sprout from the center of the basal rosette of sticky leaves. Unfortunate for me, the plants were already bloomed out and producing seeds.

There was one final, unexpected stop, after we visited a couple of other sites for Large Rosebud orchids and not finding them in bloom yet. Along one of the numerous forest service roads that connect our favorite botanical sites, Jeff slammed on the brakes (I was following him in my vehicle) and got out and pointed to a plant species which I had not seen in any great number during my adventures in the FMNF. However, along this particular forest service road (for several tenths of a mile), this species was growing like a weed! It is Asclepias longifolia or Long-leaf Milkweed. I had never seen it so plentiful anywhere, and here it was in such large numbers: 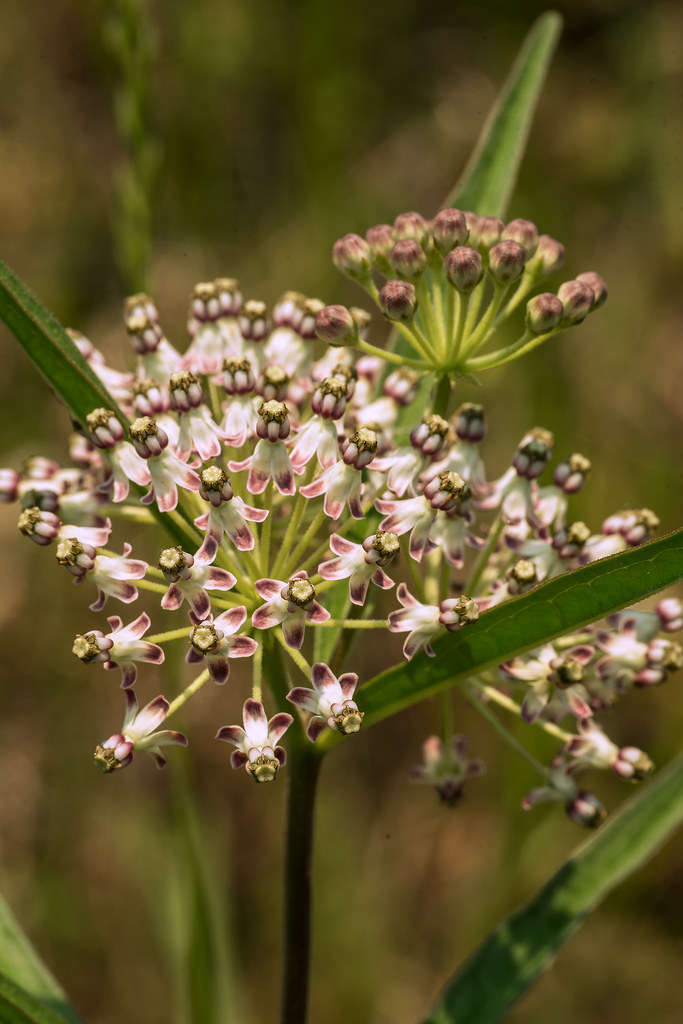 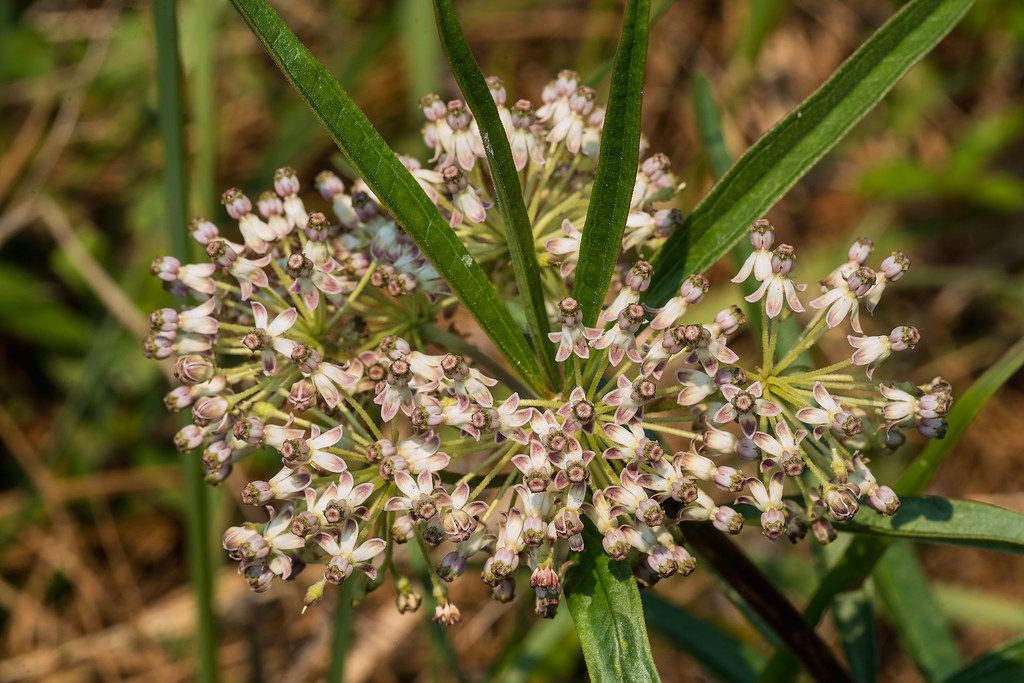 My mind is still reeling from the sight of all of those Long-leaf Milkweed plants beside that gravel, forest service road. I’ll definitely come back next year to see these beauties again!

Well, it was time for me to be heading to my next day’s adventure in the Green Swamp of North Carolina. So, after some lengthy discussion of future plans to get together, I said my goodbye and headed on out to Hwy. 17 north for Shallotte, North Carolina, and my motel for the night. The next morning, I’d be meeting my good buddy, Kelvin Taylor and two additional naturalists, Melissa McCormick, a friend who I had met at a Native Orchid Conference symposium years ago, and her workmate, Hope Brooks. They both work for the Smithsonian Institution’s Environmental Research Center (SERC) in Edgewater, Maryland. Rather than this being a work-related trip, they decided to come down and join us for some R&R in one of the Southeast’s premier wildflower habitats: The Green Swamp Preserve.