Yes, I was just down there two weeks ago, but my good friend, Jeff Jackson, gave me a few well-placed hints that there were some nice orchids in full bloom in a spot we had looked at earlier, and that I should make another trip down. I debated with myself whether or not I should create a blog post about this trip, because I had just posted images of the same orchids just two weeks ago, but I decided that I’d do it anyway. On this trip, the natural lighting varied from direct sunlight to heavy overcast (there was even a sprinkle or two early on), and I thought that it made for some interesting shots.

Except for the always-present construction on the Interstate, the 4-hour trip down was quite pleasant. I suppose that most travelers had already arrived at their Memorial Day Weekend destinations, and that made for some reasonably light traffic. So, once I was off the Interstate and on Alt. Hwy. 17 headed toward Moncks Corner, I stopped at the gas station/McDonalds to top off my gas tank (both gasoline and a bite to eat).

The drive in was filled with anticipation because I didn’t know for sure that the plants Jeff had seen and photographed earlier would still be in decent shape. In retrospect, I should not have worried. After I arrived at the trail head, I gathered my camera gear and headed off on the short hike to the Carolina Bay where the plants were growing. Fortunately, I remembered how to get there. It’s off trail and, for good reason, not marked by a path or flagging tape. But, it wasn’t too difficult for me to locate.

This site, as with many other orchid sites in the Francis Marion NF, is only slightly lower in elevation than the surrounding land. The elevation at this point is about 75 feet (23 meters) above sea level, and there are few hills — just some slightly sloping terrain. Any minor deviation in the terrain is enough to allow widely varying vegetative associations to gather. Both orchids and carnivorous plants tend to inhabit these depressions, and a Carolina Bay is the perfect representation of a local depression. Although Carolina Bays can be very large, this one was perhaps an acre (.4 hectare) in size.

The target species for this trip was Cleistesiopsis divaricata or Large Rosebud orchid. Here is the BONAP (Biota of North America Program) range distribution map: 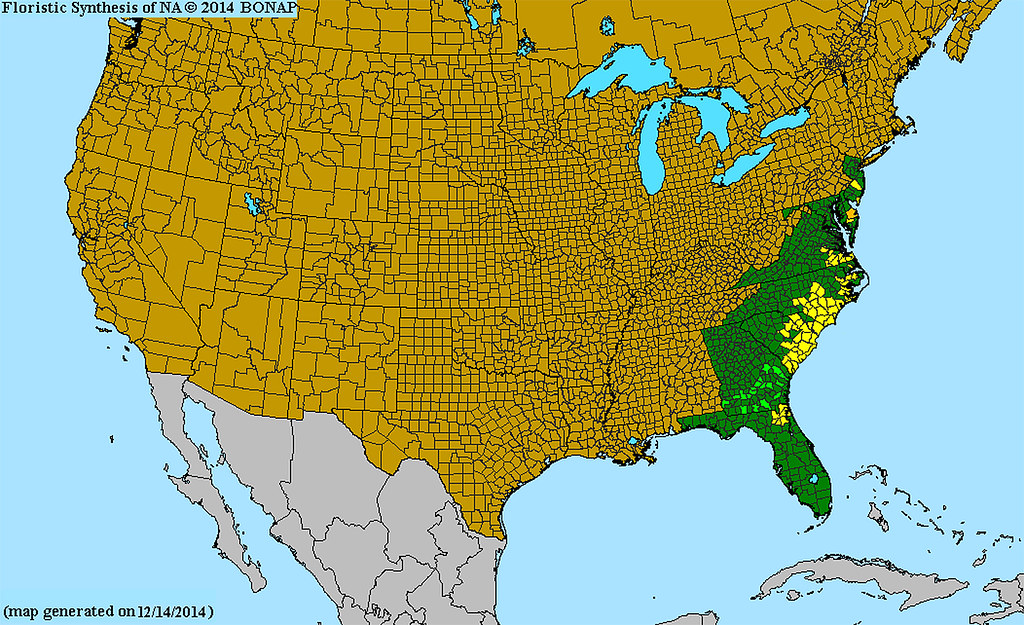 It is sometimes called the Large Spreading Pogonia orchid. I’ve seen it down in the FMNF in Berkeley and Charleston Counties, South Carolina as well as the Green Swamp Preserve in Brunswick County, North Carolina about this time of year. I have noticed, though, that the South Carolina flowers can be a darker shade of rose pink than the ones in North Carolina. They may also have delicately striped petals on occasion. In any case, here is an example of this beautiful orchid: 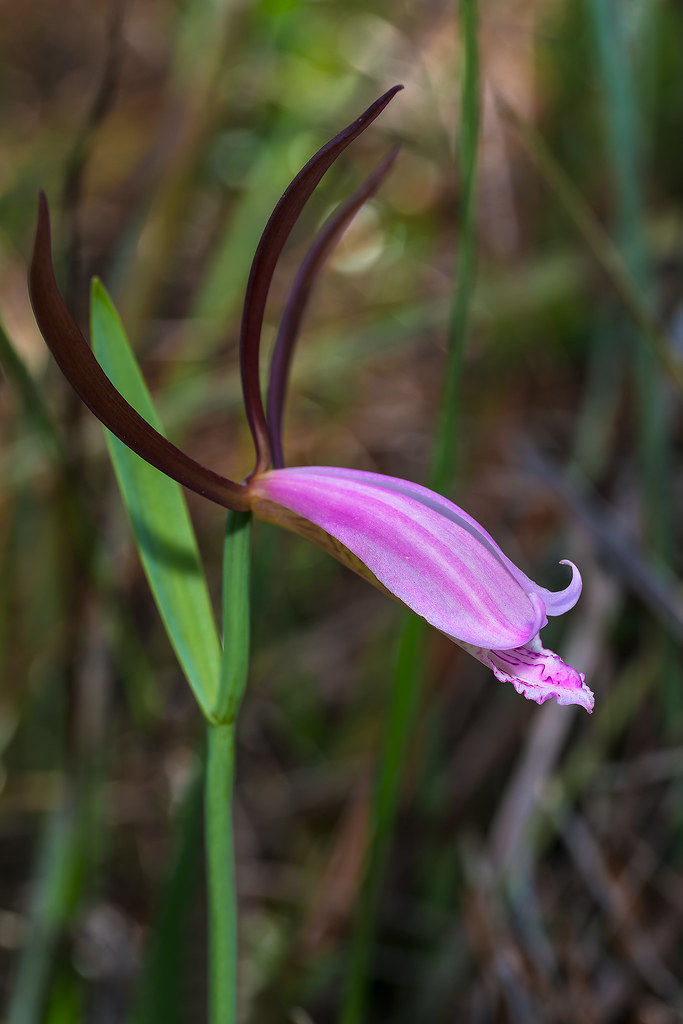 The plant is slender with only two leaves — one about halfway up the stem and the other just behind the ovary which connects the flower to the stem. Some naturalists use the size and shape of the upper leaf or bract to help distinguish this species from its cousin, Cleistesiopsis oricamporum or Coastal Plain Pogonia orchid. HERE is a recent blog post where I show each of them in flower. Those images were taken in the Green Swamp in Brunswick County, North Carolina. For me, the differences are rather striking, but there are examples, for instance in the Panhandle region of Florida, where the differences are significantly more subtle. As far as I know, the Coastal Plain Pogonia, the smaller cousin of our target species, has not been found in the FMNF — at least, I’ve never seen it, nor have I seen images of it from there.

Here are some additional images of the Large Rosebud orchid taken at the first site I visited: 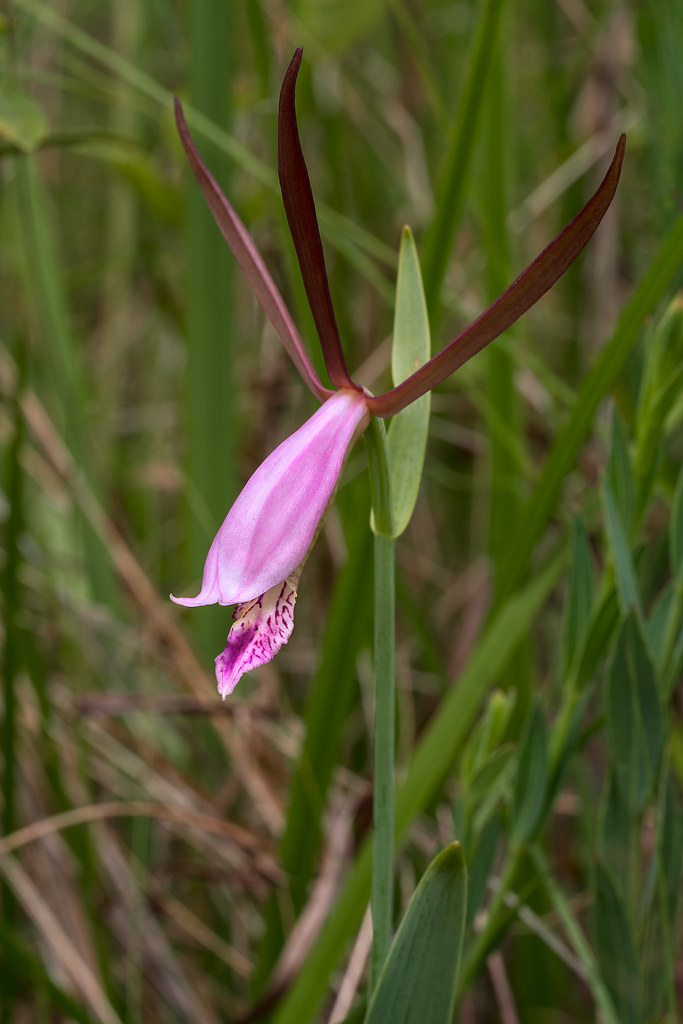 After visiting this interesting Carolina Bay, I returned to the truck and proceeded to an area where I had photographed Calopogon tuberosus or Common Grass-pink orchid in previous years. I was soon to discover that it is quite plentiful in the ditches along many of the gravel, forest service roads crisscrossing the National Forest. One place, in particular, hosted some especially dark, magenta-colored forms. Here are a few of those:

Another spot I visited, had some lighter colored ones:

One spot had a few Common Grass-pink orchids among some Sarracenia minor or Hooded Pitcher Plants, which are very common in the FMNF: 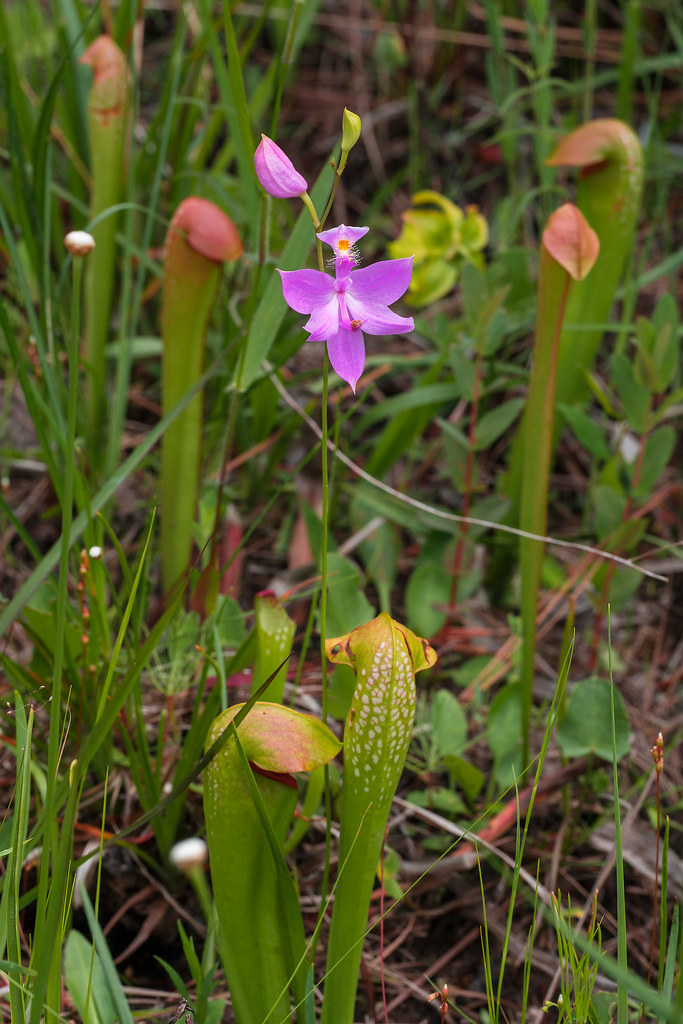 Cirsium horridulum or Bristly Thistle and Papilio glaucus or Eastern Swallowtail Butterflies are quite common in the FMNF, and both were showing off the day I visited: 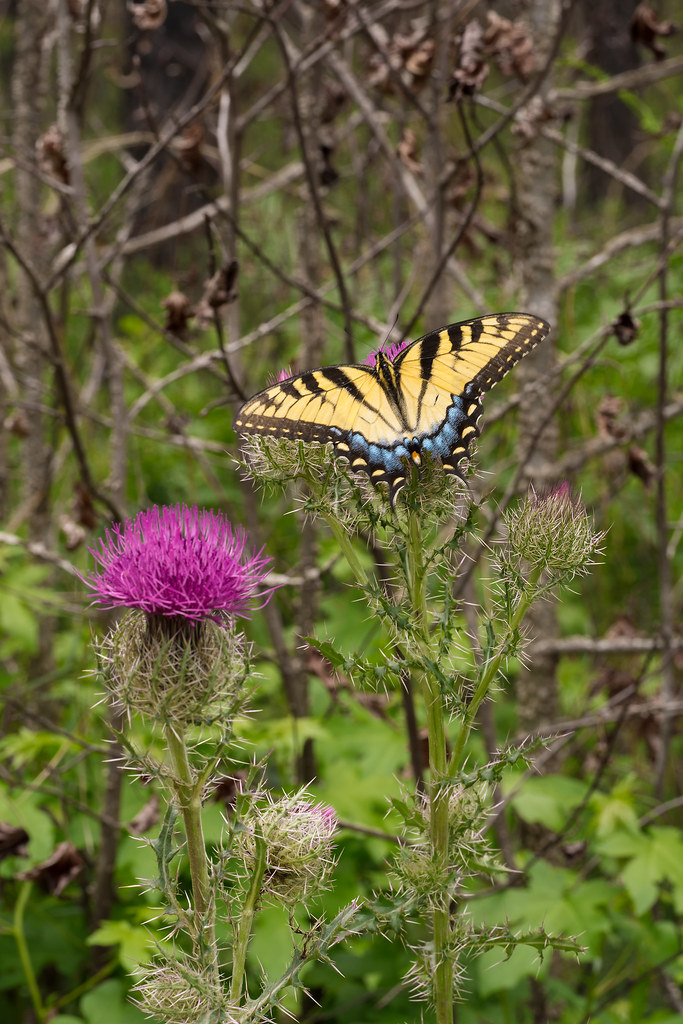 Also showing off were the wet ditches full of Iris tridentata or Savannah Iris. They were all blue/purple but varying shades of each: 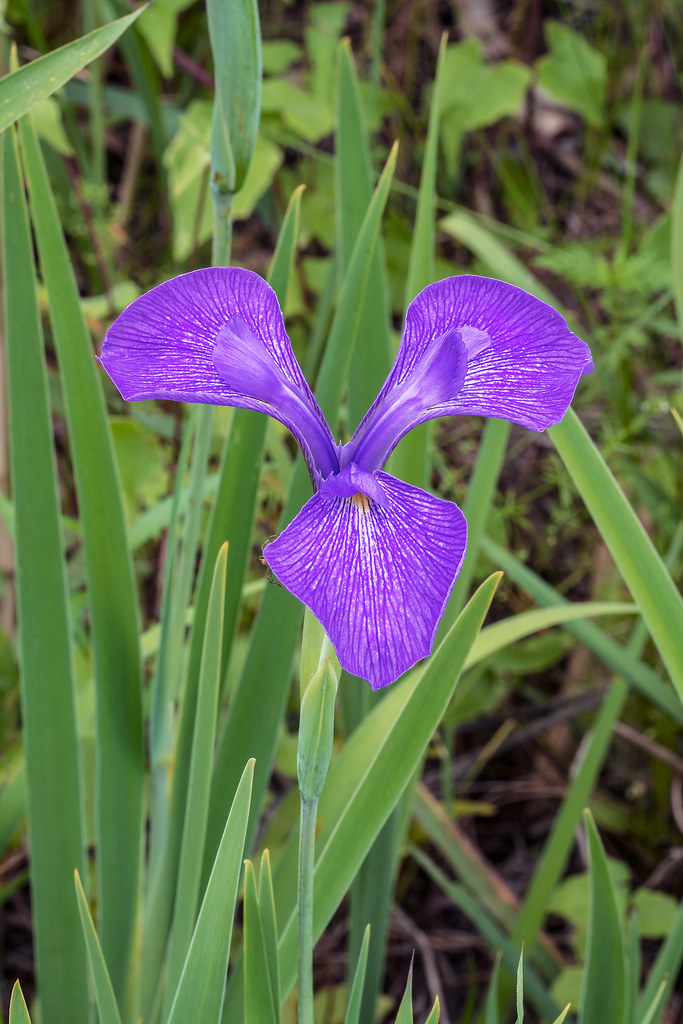 Nearby, was a Passiflora incarnata or Passionflower vine. I understand that it is called “Passionflower” because of the “cross” on top that is part of its reproductive system: 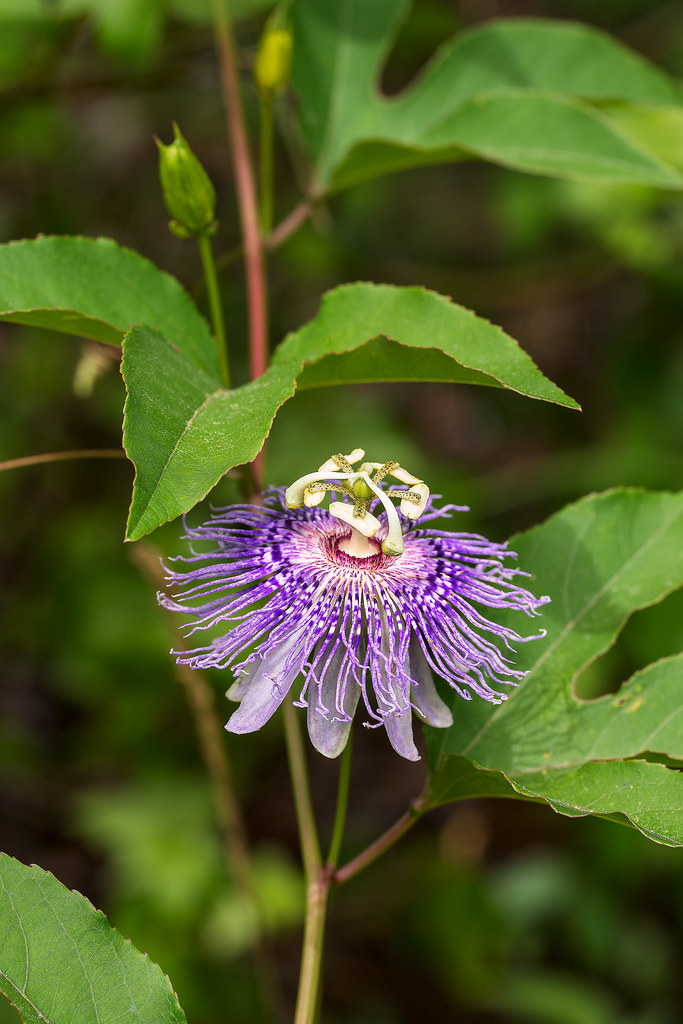 And above all of this in the top of a shrub was an Argiope aurantia or Writing Spider with a Calopogon tuberosus or Common Grass-pink orchid in the background: 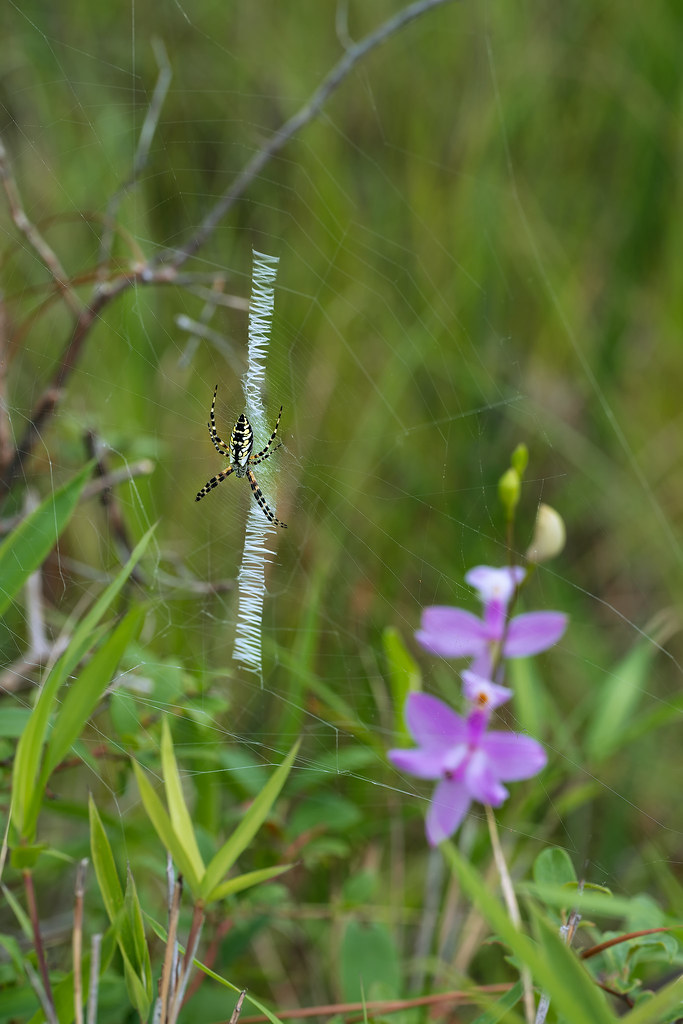 It was getting late, and I had a 4-hour trip ahead of me to return home, but there was one more area I wanted to check out. This is a roadside site where I have found the Large Rosebud orchid in previous years. So, I packed up and headed to the site. By this time, the sun had come out from behind the clouds, and I was hoping for some shade to prevent harsh shadows on the flowers. There was not much of a shoulder on the roadside to park my truck, so I had to drive down the road a bit before I found a grassy pull-off.

Gathering my gear, I wondered if I would be able to find the plants and if they would be in flower. As I approached the ditch, I could see some pink peeking out from the shrubs on the edge of the ditch. Great! They were there, after all! As I set up my tripod, I noticed that the flowers that were in the direct sunlight presented themselves in a way that I had never seen before. The backlit flowers almost seemed to be lit from inside. It allowed for the beautiful pattern on the underside of the lip to be seen. So, I took advantage of the bright sunlight and here is the result: 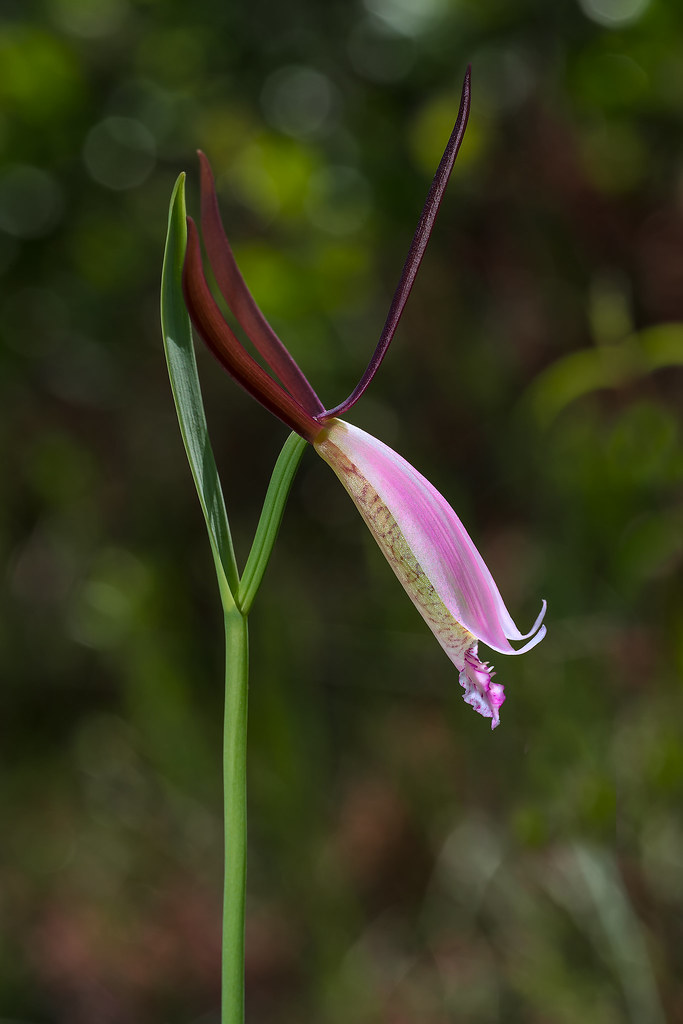 It turned out to be a better photography day than I had expected, and it made the trip back home much more pleasurable knowing that I had been able to photograph this orchid species as well as I am able. My thanks go out, again, to my friend Jeff Jackson for being so good at locating these beauties in the FMNF. He shares some of his many field locations with me because he knows that I will take care when I’m around the plants, and that I will not divulge these locations to anyone else.

Although these particular orchids are not strictly fire-dependent, meaning that they will come back in years when that tract of forest is not burned, too much fire suppression in a forest that has evolved with fire will result in the plants eventually being overgrown with woody vegetation and not being able to compete for necessary sunlight and nutrients. Fortunately, this tract is burned on a 3-year basis, which should result in our being able to enjoy these orchids and other wildflowers and carnivorous plants for many years to come.

I’m thinking that the next couple of months will take me back to my beloved Southern Appalachian Mountains where summer orchids and other wildflowers abound.