Staying for a few days at our tiny-house mountain cabin in western North Carolina, and it being the Summer Solstice, I figured this would be a great time to check out what was going on along the Blue Ridge Parkway. Walter Ezell and I had lots of chores to do at the cabin, but a break in the routine was just what I needed, especially since I had not had a good field trip in weeks. So, we arose early on Solstice Day, ate breakfast in the sleepy little town of Newland, the county seat of Avery County, North Carolina, and headed toward Grandfather Mountain. Most of the images included in this blog post were taken in the “shadow” of this well-known landmark.

Rain was predicted late that afternoon and during the following day, so getting an early start was a must. Of course, a few clouds are always welcome to cut down on the harsh shadows that direct sunshine can cast.

We entered the Parkway at about Mile Marker 305, and not much farther north was our first stop. A few years ago, my friend Meng Zhang had located a large population of Liparis loeselii or Loesel’s Twayblade orchid along the roadside, and she later told me the location. Each year, I attempt to photograph these orchids, noting that there are some good years for them and some not so good years. The past couple of years, the mowing team employed by the National Park Service (the Blue Ridge Parkway is a national park), did not mow the woody vegetation as closely as in previous years, and the growth of Rhododendron had shaded out most of the orchid plants, causing the numbers to decline precipitously. I was hoping for a better outcome this year, so upon arriving at the site, I was both pleased and disappointed at the same time. The mowing crew had mowed the woody plants — almost to the ground — but the orchid plants had not taken advantage of the added sunlight. I’m guessing next year should be a banner year for them. XX (fingers crossed).

We managed to find 4 blooming plants in a spot where many dozens had been growing just two years ago. Not wanting to miss out on the opportunity, I set up my tripod and took a few shots. Here is what we saw: 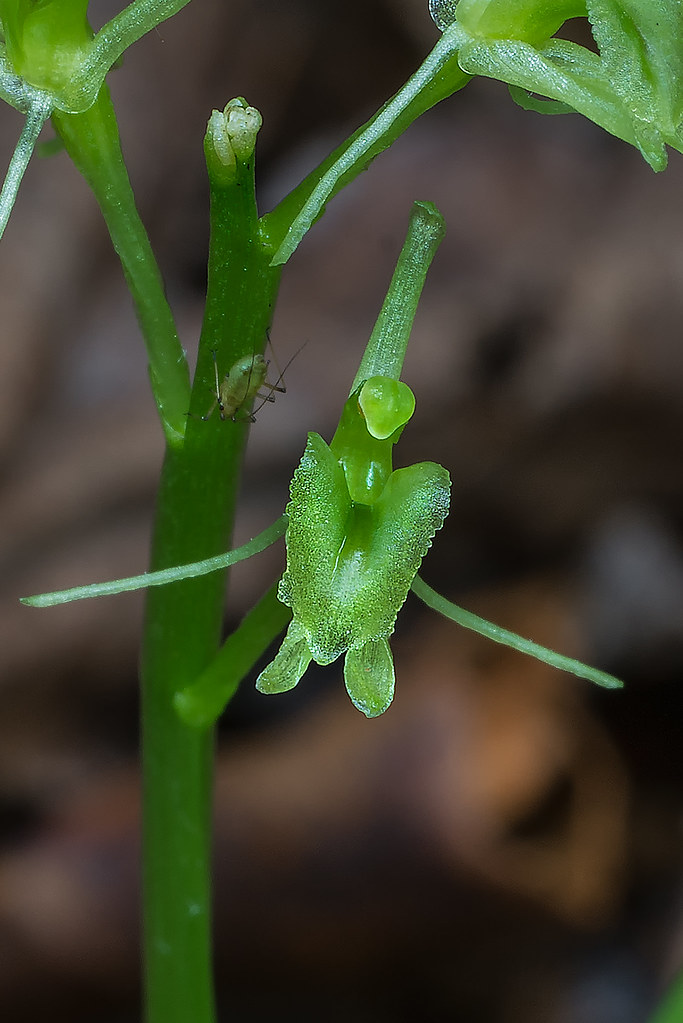 We finished up at this site fairly quickly due to the lack of blooming plants. I had wanted to check out a couple of locations for Platanthera orbiculata or Pad-leaf orchid, so we packed up our gear and headed down the Parkway to the first of three sites where I had seen this particular orchid growing. This one is a much more northerly native orchid species, and this is about as far south as one could expect to find it. I’ve photographed it in previous years, but last year I could not find any blooming plants. I had hopes that this year would be different. Here is a shot of this species I took a few years ago: 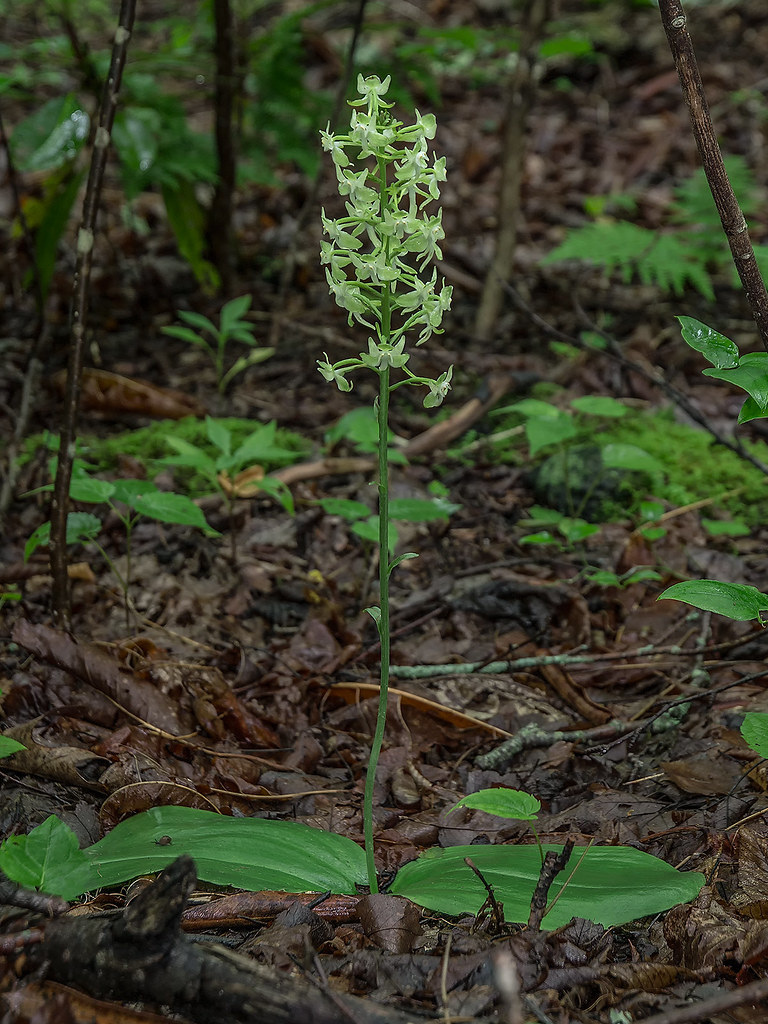 The first stop was at a trail leading off of an overlook on the Parkway. The hike up was short, and we did not see the orchid plant where I had previously found it. No problem. There were two additional places to check out. The second site was along a portion of the Tanawha Trail that leads off from the Linn Cove Visitors Center. Bummer! The Visitors Center was closed and the gated driveway locked. No problem. The third (and final) place where I had seen several plants in bloom was along the Nuwati Trail off of the Boone Fork Overlook. It’s about a 1-mile (1.6-km) hike overall, and it’s not strenuous, so I was looking forward to the hike. Getting to the Nuwati Trail takes you across a wonderful, wooden-arch bridge that is quite spectacular: 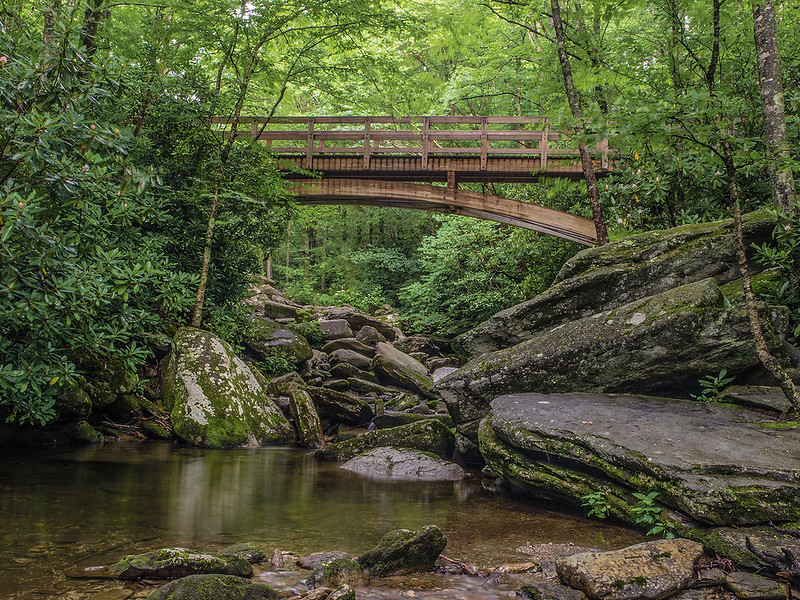 We made it up to the site where I hoped to see the orchids in full bloom, but we found only a single plant without any flowers — just the leaves. Sigh… Three strikes and you’re out… I don’t know if climate change has anything to do with not finding the plants I was expecting or if there is some other reason. Because it is at its southernmost range along this portion of the Parkway, its status is tenuous at best. Any small change in annual temperature or rainfall could have huge ramifications on its survivability. Regardless, it was quite disappointing to come away empty-handed.

Well, the day was not done, so we packed our gear and headed just up the road to another Overlook where I have found several orchid species along the roadside. We arrived and parked in one of the spaces near the road. I knew just where to go to find the second native orchid species of the day — Neottia smallii or Appalachian Twayblade orchid. The plants at this particular spot are widely scattered along the mossy embankment and are difficult to see against the other vegetation. But soon, we were seeing a few fairly nice plants. Here is a selection of this strange looking native orchid: 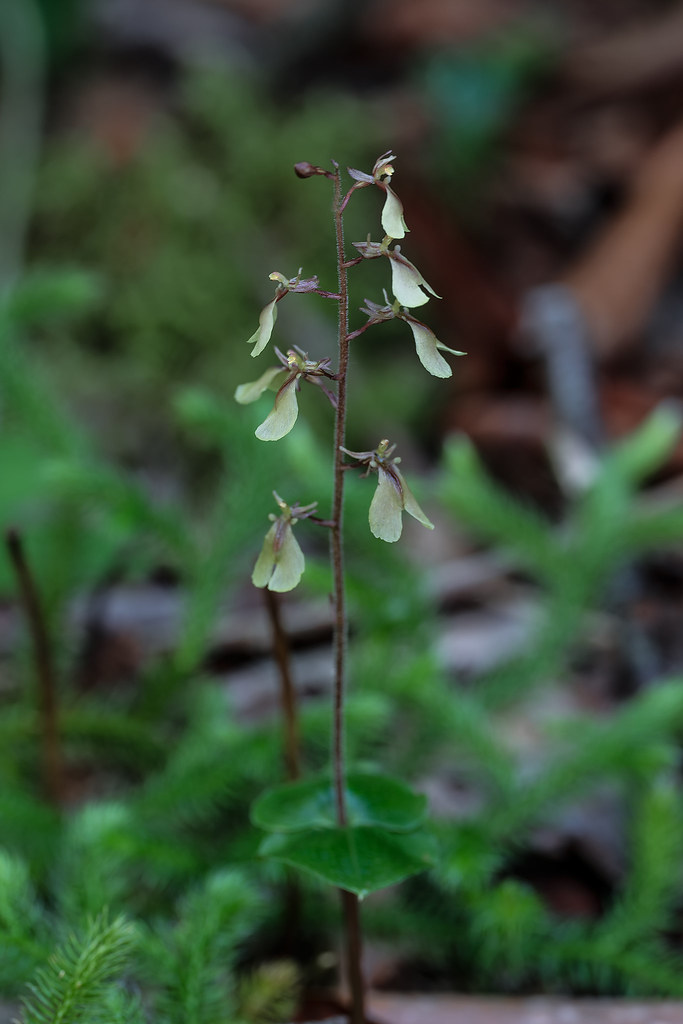 You can expect to see more of this species in a couple of weeks when I’m back up on the Parkway about 100 miles (160 km) farther west.

After we photographed the Appalachian Twayblade orchids, I remembered that I had seen a small patch of Loesel’s Twayblade orchid just a short distance up the road last year. So, we walked along the roadside looking for the shiny green leaves of this orchid species. Sure enough, there they were! But now, there were 18 blooming plants! Because they were growing in a large patch of moss the same color as the leaves, it was a challenge to get any definition of the leaves and flowers, but here are some sample images: 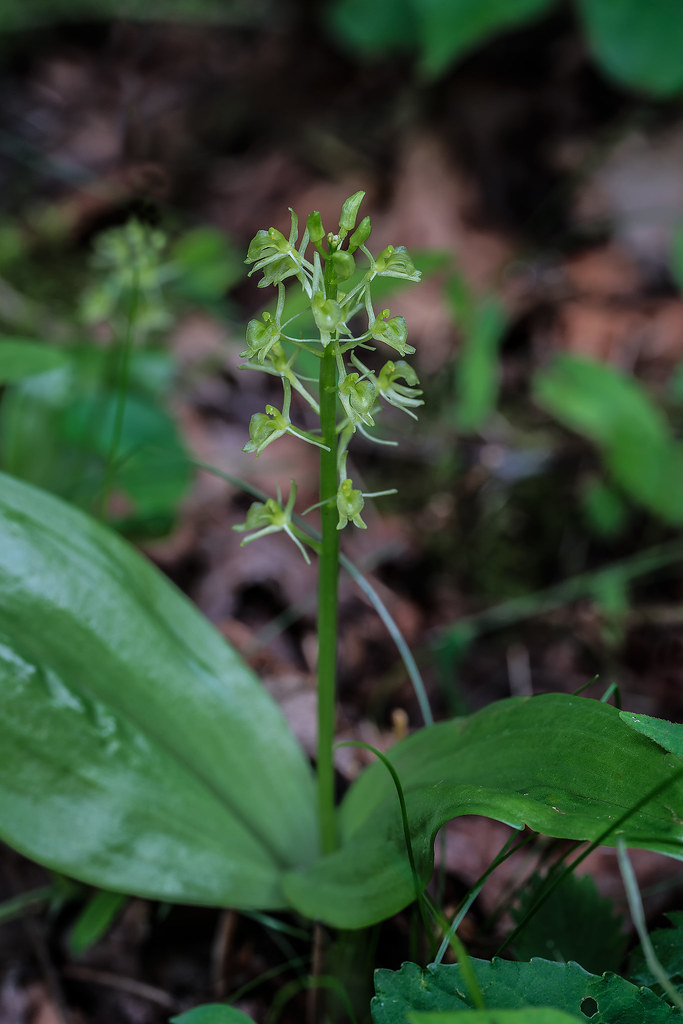 It was great to have another good site for this orchid along the roadside of the Parkway.

Soon, we were driving farther north to try to catch some of the many Milkweeds that were growing along the road. The first ones we saw were Asclepias exaltata or Poke Milkweed. It is called Poke Milkweed, because its leaves closely resemble those of Phytolacca americana or Pokeweed aka Poke sallet [salad].

Note: The leaves of Pokeweed, although toxic when mature, can be picked when young and boiled to make them edible. They make up a good-tasting salad, I’m told… Of course, the Milkweed leaves are also toxic, but that’s the reason certain butterfly larvae munch on them — to infuse the toxins into their body for the purpose of warding off prey. According to Wikipedia, “The entire Pokeweed plant contains triterpene saponins such as, phytolaccagenin, jaligonic acid, phytolaccagenic acid (phytolaccinic acid), esculentic acid, and pokeberrygenin (in the berries), as well as phytolaccasides A, B, D, E, and G, and phytolaccasaponins B, E, and G (in the roots). The roots also contain other triterpenoids such as oleanolic acid, α-spinasterol and its glucoside, α-spinasteryl-β-D-glucoside, and a palmityl-derivative, 6-palmytityl-α-spinasteryl-6-D-glucoside, as well as a similarly functionalized stigmasterol derivative, 6-palmityl-Δ7-stigmasterol-Δ-D-glucoside. Pokeweed berries also contain betalain pigments such as betanin and others. The leaves contain a number of common flavonols. Seeds of Pokeweed contain the phenolic aldehyde caffeic aldehyde. Pokeweed also contains lectins, such as pokeweed mitogen.” After reading this, I’m not sure I’d ever want to try Poke sallet.

Anyway, here are some shots of the rather tall, Poke Milkweed plants we saw:

Driving farther north, we began to see large patches of another Milkweed species, Asclepias syriaca or Common Milkweed. In many locations, it was only in bud, but we did manage to find a couple of sites with flowering plants. Apparently, it blooms a week or so later than the Poke Milkweed. Interestingly enough, a couple of years ago, we managed to find a hybrid between these two Milkweed species — not unheard of, but still quite rare. Here are a few shots of this delightfully fragrant Milkweed species: 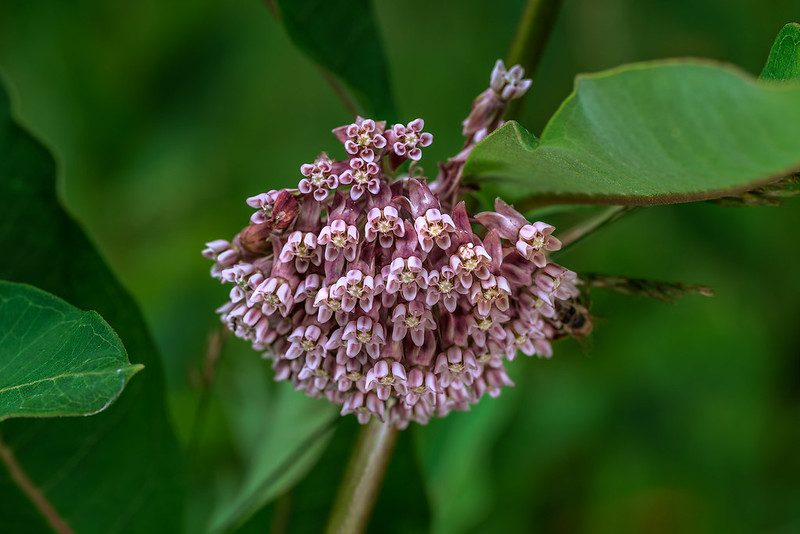 It was getting to be late afternoon, and it was time to head back to the cabin to finish our chores. On the way back, just short of our turn off out of the Parkway, I spotted a wonderful Rhododendron calendulaceum or native Flame Azalea in full bloom. I had actually photographed this same one last year, and I thought that the color was exceptional. Here it was, again, just begging to be photographed: 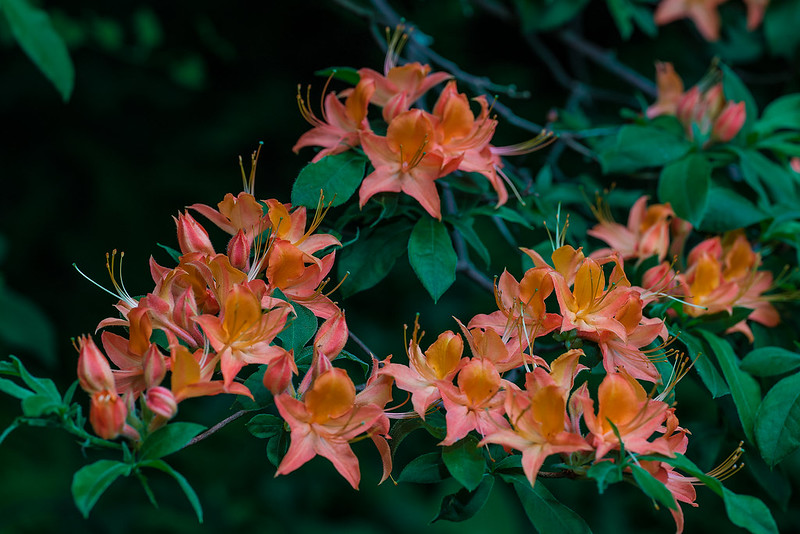 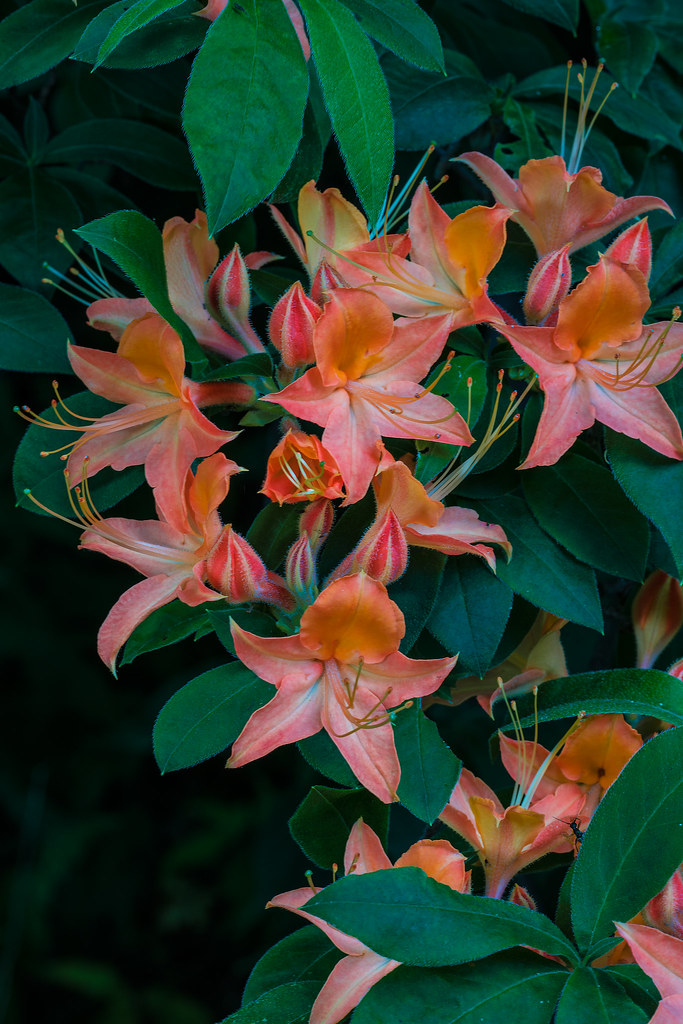 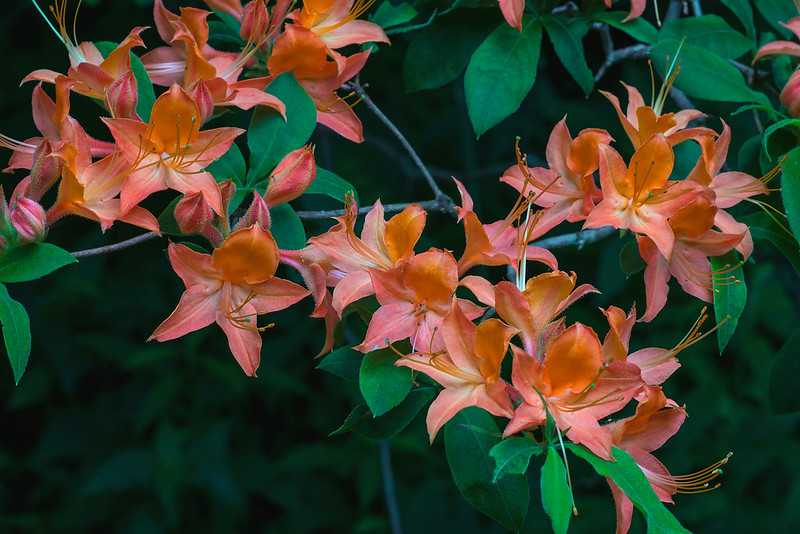 Flame Azalea comes in a wide range of colors from a pure yellow to a deeper orange-red. But this peachy-red color was so unusual that I thought it to be very special. So, I’ll be photographing it each year that I’m able.

After photographing the Flame Azalea, we proceeded off the Parkway and home to our mountain cabin. Just for the sake of documentation, here is a shot of the cabin covered in snow, taken for our Airbnb listing: 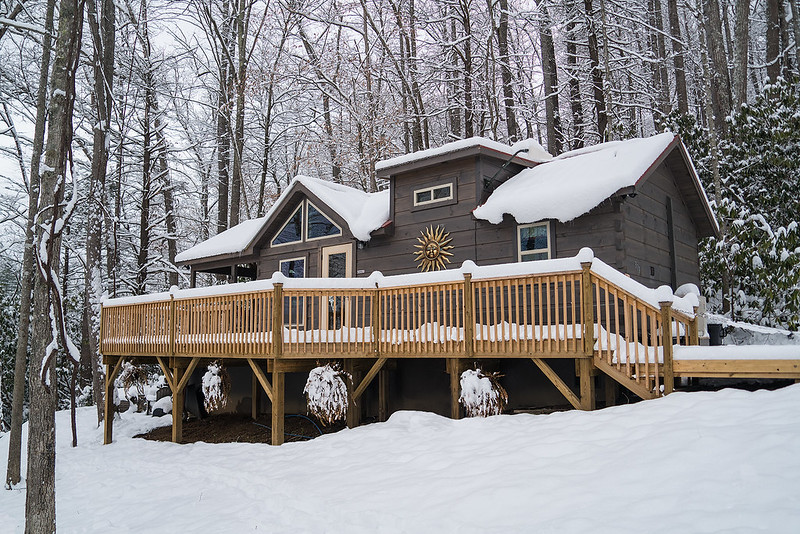 I have documented more than 50 wildflower species on our mountain property, one of which is Poke Milkweed. Here are a few shots taken the next day as I was preparing to do some landscaping on the property: 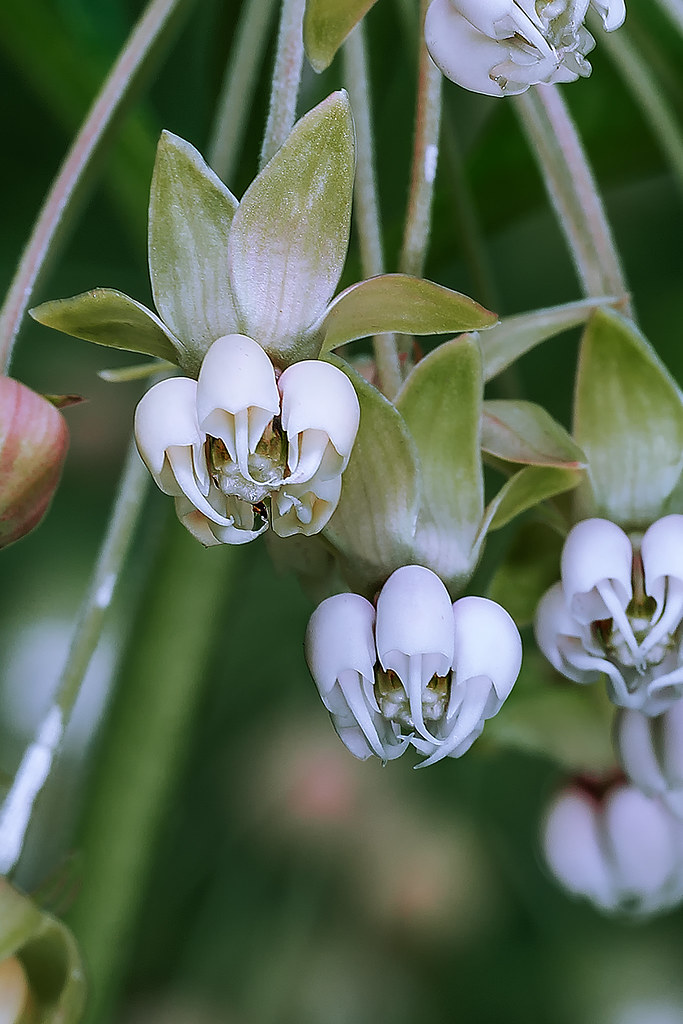 To close out this blog post, I’ll leave you with a couple of critter shots that Walter took while I was operating the weedeater next to the river. First, is a small Diadophis punctatus or Ringnecked snake on the wood pile, and second, is a Notophthalmus viridescens or Red-spotted Newt in the Juvenile Eft stage: 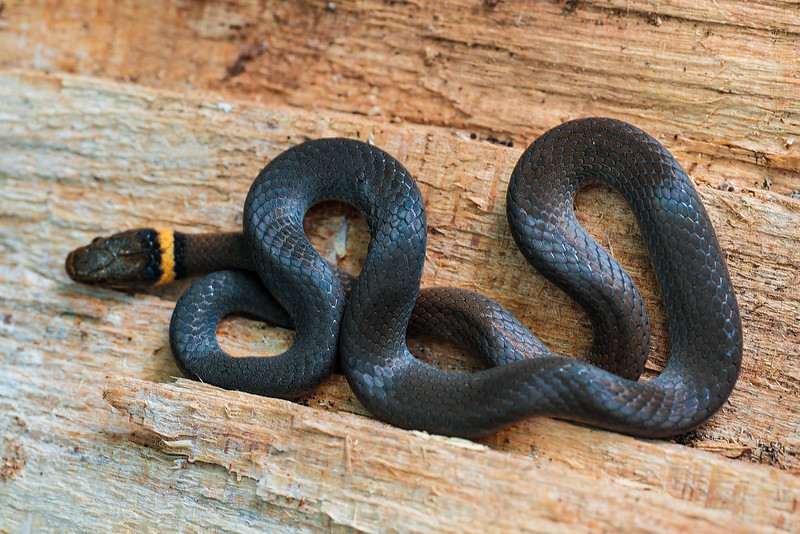 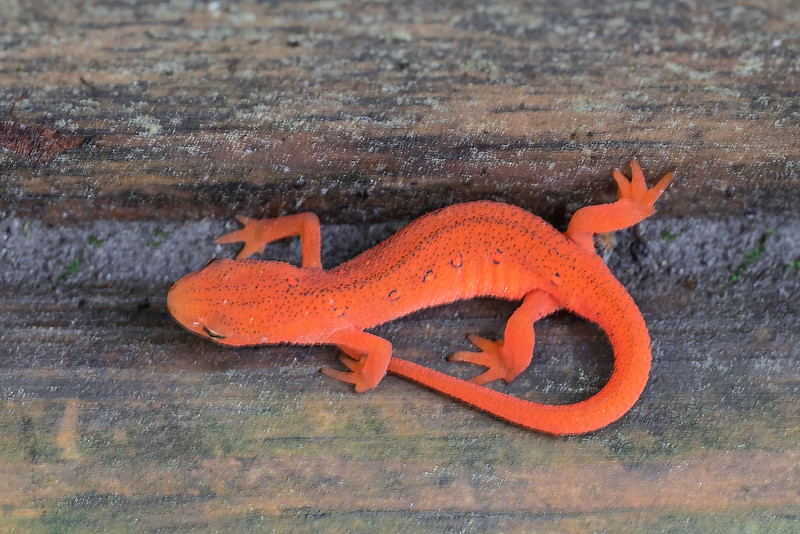 This was a pretty good visit to the mountains of North Carolina. Be on the lookout for a couple of more blog posts in the next few weeks as the summer wildflower season picks up in the Carolina mountains and along the Blue Ridge Parkway. It turns out that some of the species I’ve photographed in the past have waned while others have grown in size. I suppose that’s the way nature takes her course, especially where human intervention also plays a role as in roadside mowing and such.