The Timeliness of an Untimely End

Jim Fowler did a great many memorable things in his 74 years, but the way he left us is among the most memorable. He left us while returning once again to Mt. Mitchell to appreciate the wild profusion of the purple fringed orchids that bloomed, once upon a time, in early July but of recent years in late June. We have this photo of him rejoicing in the profusion on the slope below the Mt. Mitchell restaurant, July 1, 2006, 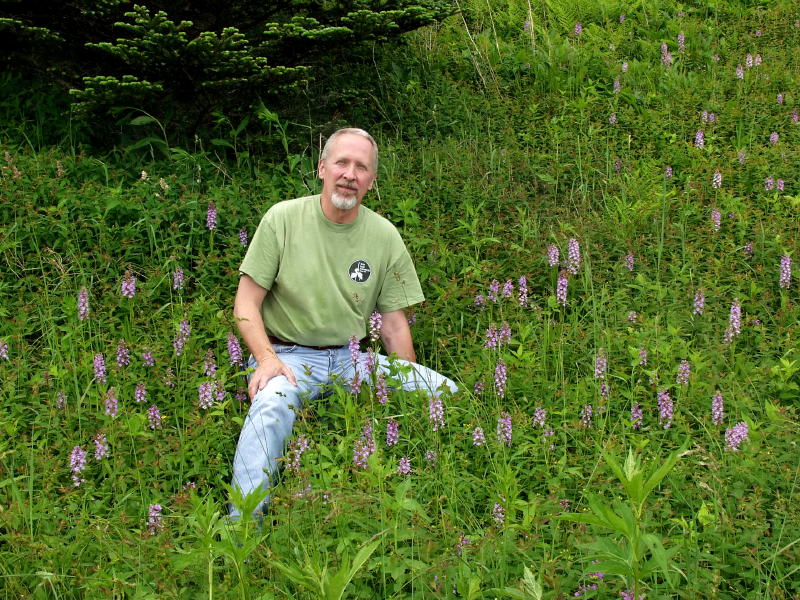 and this one, in the same spot eleven years later. 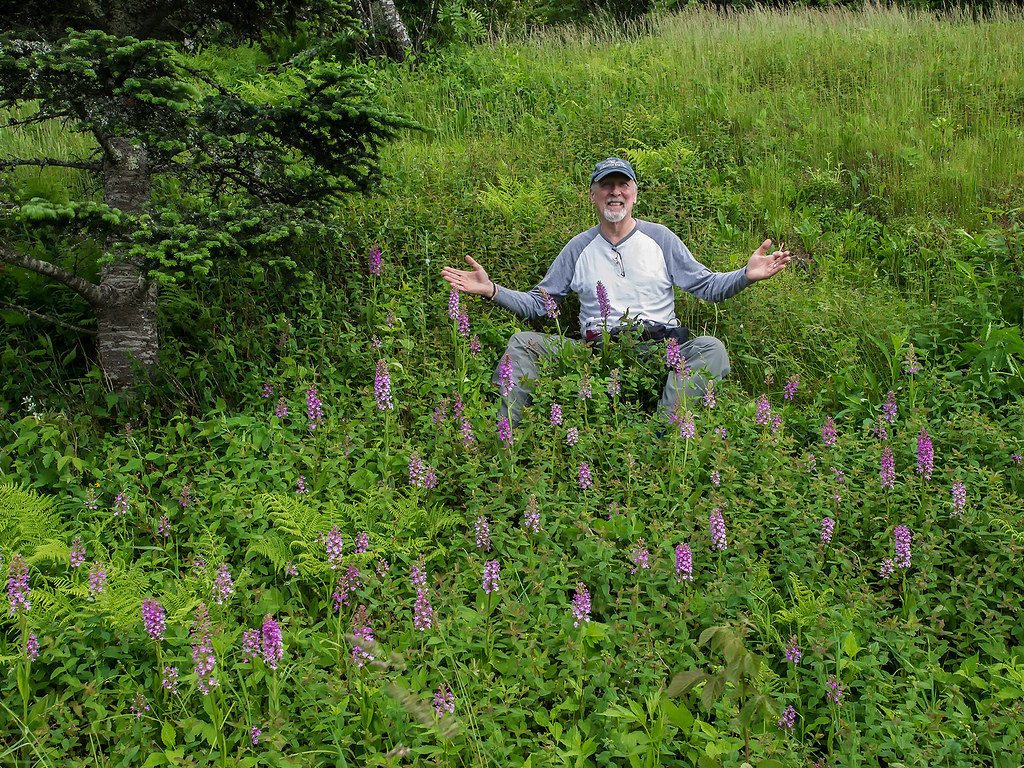 And we have this image from 2009, showing his pickup truck parked in the same place he left it again this year on that last day when he was taken with a heart attack.

A passer-by saw this man lying by the road and reported to the park headquarters a mile away. By the time a ranger arrived, a doctor from Greensboro had seen the crisis and was administering CPR.

It all happened so quickly. The medical examiner recorded an approximate time of death as 3:15. Jim died attended by caring people, surrounded by the beauty he returned to year after year. He was there, on that final day, doing what he loved.

This was not the only strange convergence in Jim’s memorable life. There were the stamps. Jim was a lifelong stamp collector, with dozens of albums. In the early ‘90’s when we couldn’t find software that would readily create custom stamp album pages, Jim, a software engineer, wrote the computer program called AlbumPro. 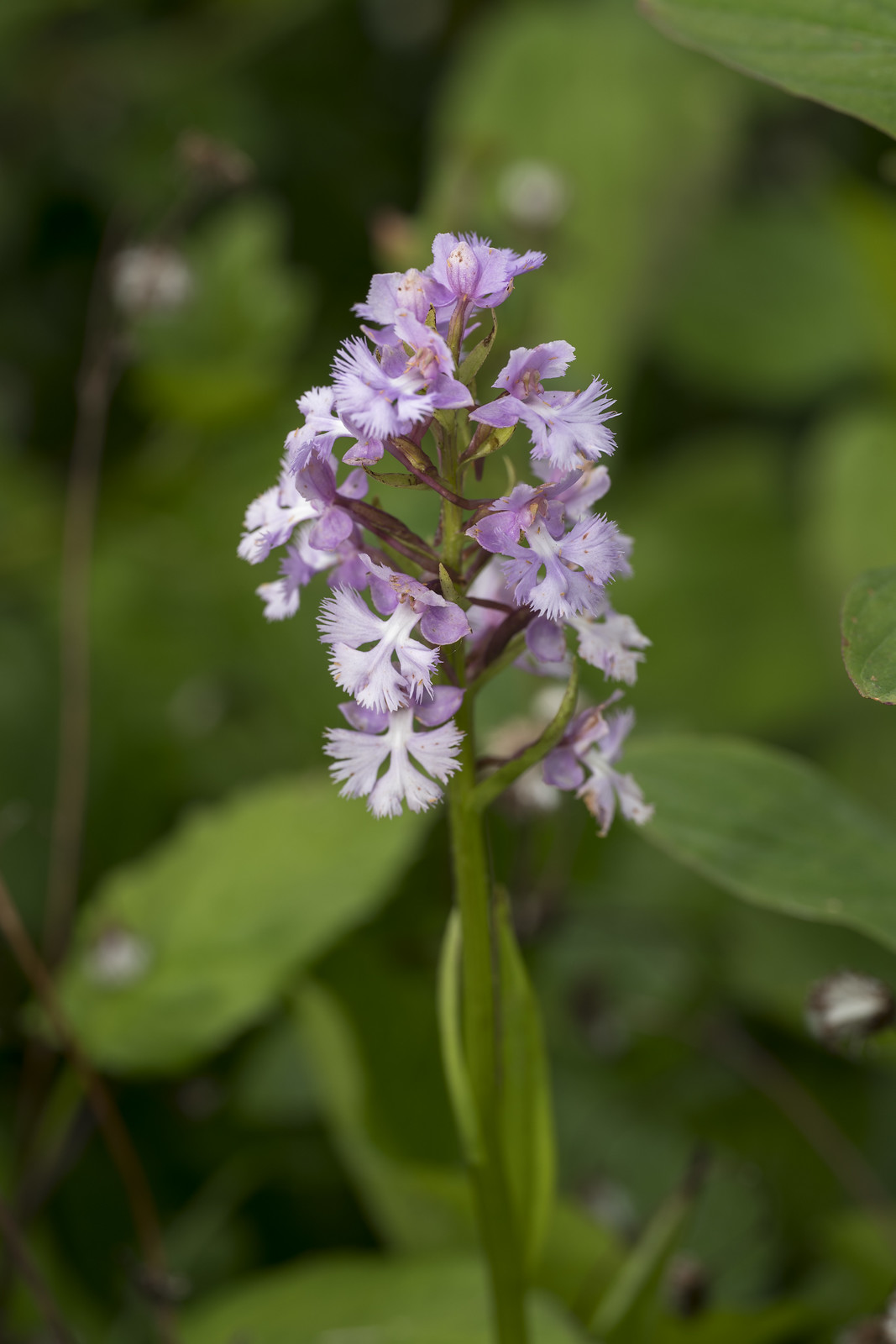 Stamps. Photography. Orchids. Three of Jim’s passions. So why wouldn’t the U.S. Postal service issue 10 stamps with Jim’s photos of orchids? We went to Coral Gables, Florida last year for the dedication ceremony. This was a convergence that Jim called a trifecta.

But all this is mere biography. What we will really remember is his kindness.

As a young man Jim flashed smiles wherever he went. His was the unearned beauty of youth. In his senior years he had a different beauty. His resting face radiated a deep kindness with a modicum of melancholy. Smile lines creased his eyes, but you’d have to squint to find traces of frown lines.

I accompanied Jim on many of his photography expeditions. He had an amazing ability to notice tiny flowers growing along the roadside as he cruised the backroads in his Ridgeline. He could remember where flowers grew years earlier and comment on how their numbers had increased or decreased, or even skipped a year or two. He would speculate on the causes. He was always disappointed when roadside mowing interfered with the life cycle of plants he regarded with tenderness and joy.

Indeed, two things made him crabby: indiscriminate mowing, and drivers who changed lanes without signaling.

And there was his bog garden, a 3-foot by 12-foot place of beauty in our front yard, where he tended pitcher plants, sundews, wild orchids and other precious plants. Here again, mowing was an issue. He would not allow anyone else to mow the lawn lest they fling seeds and contaminate his bog garden. Whenever I went to the living room expecting to see him, if he wasn’t there, I would find him kneeling by the bog garden, observing its beauty, grooming it, removing weeds. I would join him, and he would comment on the progress and status of specific flowers. In his last days he was looking forward to a bountiful blooming of a budding group of spiranthes. As I write this, the buds are beginning to open. It will take a week or two for them to reveal their full glory. I will do what I can to maintain his garden, and will turn to one of his many friends to identify each species for me.

Here’s an example of his kindness: A young man said his parents had given him permission to build a bog garden. He asked Jim how, and Jim took the time to write him 650-words of detailed instructions on Facebook messenger. We don’t want to bury the news about Jim’s final day, but after a few weeks, I might post Jim’s instructions for building a bog garden.

As the news about Jim filtered out, the tributes poured in.

According to Dr. Richard Porcher, the author of A Guide to the Wildflowers of South Carolina, and former professor of biology at The Citadel, “Jim was an outstanding field botanist. He was always willing to share his discoveries and time with his fellow field botanists and anyone else interested in photography and field work. His books will stand the test of time and be a treasure on my bookshelf.”

According to Emmy-winning naturalist Patrick McMillan, “I believe there will never be another human who will be able to capture images of orchids the way he did. The second edition of A Guide to the Wildflowers of South Carolina (in press) would not have been possible without his contribution.” Here is a link to Patrick’s remarks about Jim.

According to Kristen Austin Gunter of the Nature Conservancy of South Carolina, “This Earth has lost a dear friend. His stories and images will live on. Through his updates and vivid images, Jim was the frontline doctor, the reporter, and the artist who took it upon himself to take the pulse and record the health of the natural world in his own backyard.”

On that final day, Jim was gathering measurement and site information for the Smithsonian’s North American Orchid Conservation Center. They are doing research on how the hybridization of two species can eventually lead to the formation of a third, distinct species. We are sending the NAOCC his photos and field notes from that day in support of the research.

Here are links to Jim’s obituary and a beautiful write-up by the Post and Courier.