After leaving the upper Greenville County heritage preserves, I headed up Hwy. 276 toward Brevard, North Carolina and the Pisgah National Forest. Here, I hoped to find the elusive Neottia smallii or Appalachian Twayblade orchid also known as Kidney-leaf Twayblade orchid. I use the term, “elusive”, because this diminutive orchid is almost never seen unless it is specifically hunted. It grows under dense stands of Rhododendron maximum in very low light, usually next to flowing streams. Even when it is sought out, this orchid tends to remain hidden from view because of its small size and muted coloration. 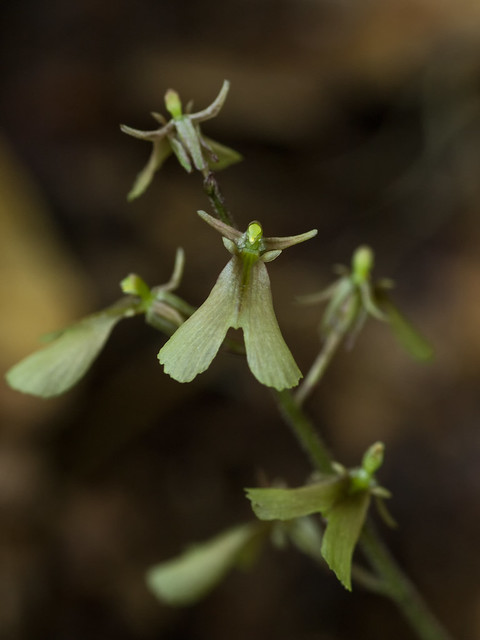 My first stop was on a Forest Service Road north of the Cradle of Forestry center and just off of U.S. Hwy 276. On just about any small stream in this area, you can find this orchid with some diligent searching. It requires kneeling down on the damp, leaf-littered ground and pawing through and under the overhanging limbs of the Rhododendron. Although it is elusive and frequently overlooked, it is (in my opinion) not as rare as one might think.

Once the location of blooming plants is discovered, it is necessary to prop up the drooping limbs so that camera equipment can be properly positioned for photography. Lighting is another problem. Available light is my preference. I do not like to use a fill-flash unit, and I’d rather use a silvered reflector to add fill light, but sometimes that just won’t work. Since the plants seem to prefer growing in a damp area next to a stream, that means that some part of you will necessarily get wet. Get over it. In this case, “the juice is worth the squeeze…”.

Here are a few shots of this wonderfully strange orchid:

Although there were several dozen plants scattered over a large area, only a handful were in bloom. Most of them were in tight bud like this one: 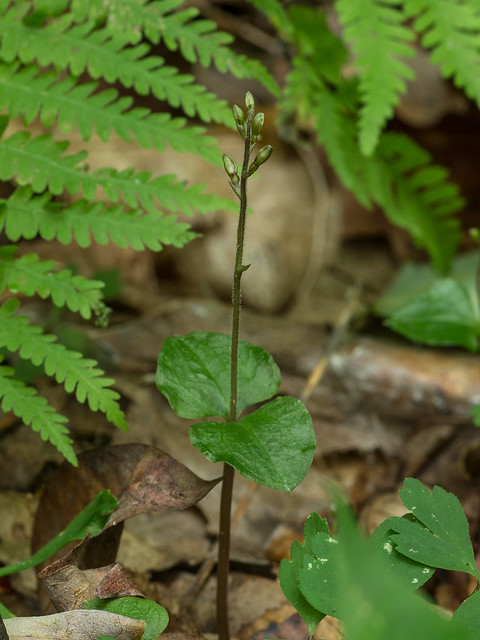 This particular image shows the “kidney” shape of the two leaves. Sometimes, that is the first thing you will spot when searching for this orchid, since the other parts of the plant are the same color as the leaf litter on the forest floor.

Nearby, there were many shiny green leaves of Hexastylis heterophylla or Variable-leaf Heartleaf. As I have mentioned in a previous blog entry, the leaves of some plants will be a uniform shade of green, while the leaves of other plants will show a light green veining pattern. The leaves of most of the plants in the immediate vicinity of the orchids were a uniform green shade: 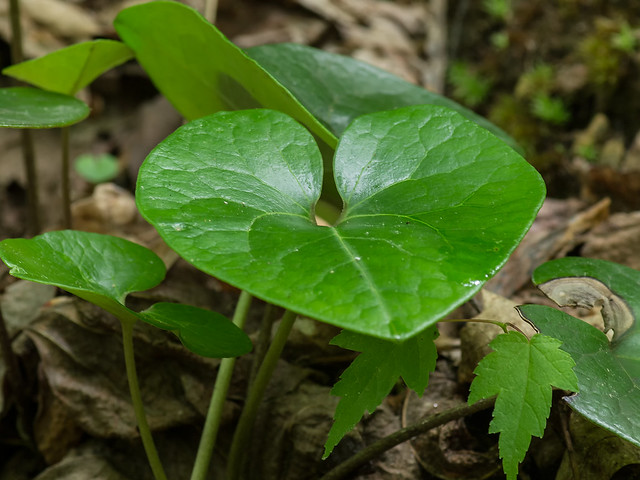 Of course, the most interesting part of this plant is its strange, bell-shaped flower:

With very careful removal of the overlying leaf litter, one can expose these oddly colored flowers for viewing. According to experts in the field, Hexastylis flowers are pollinated by ants and other small crawling insects, perhaps small beetles. In order to attract pollinators, the flowers have to be within reach of them. That is why the flowers are found on the ground and under the leaf litter. This is an interesting method for plants to reproduce, but, whatever works…

Also lining the edge of the stream are dozens of Galax urceolata or Galax sometimes called Wandflower for good reason. This is a plant that definitely feels the pressure of leaf-collection — especially in the winter when the evergreen leaves are easy to find. I have seen collectors leaving the woods with arms full of the shiny green leaves. I suspect they are to be used for seasonal decoration, wreaths, and flower arrangements. I cringe at the thought of imperiling this wonderful native plant, but so far, its presence in huge numbers has kept it from disappearing from the landscape. Today, I was just happy to be able to photograph it: 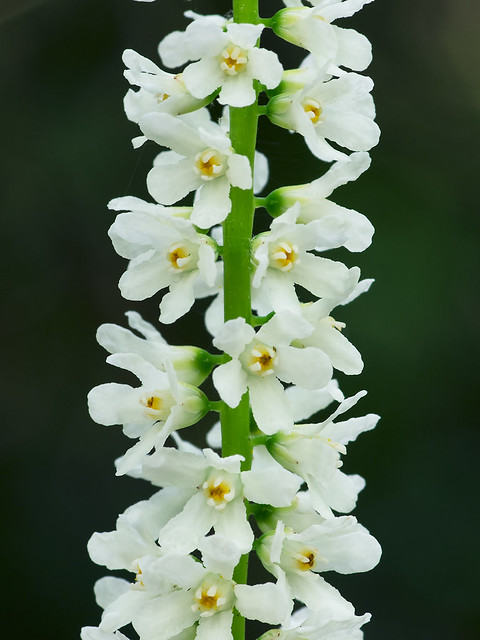 Here is a shot of the leaves: 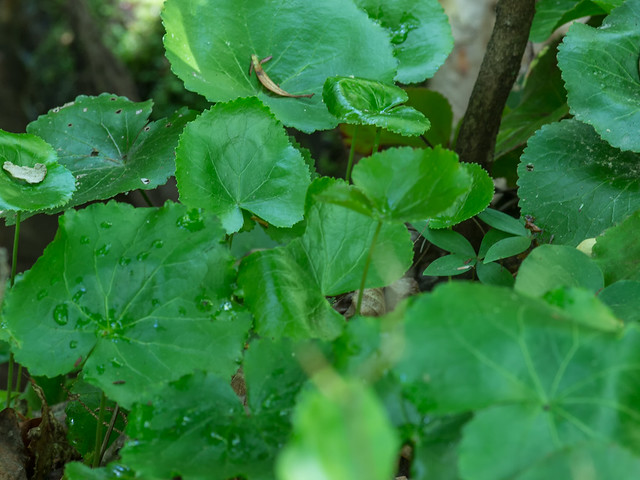 It was now getting to be time to pack up and head back home. On the way out of the woods, I spotted a curious, white growth at my feet. This turns out to be Clavicorona pyxidata or Crown-tipped Coral Fungus. It really does look like a coral up close: 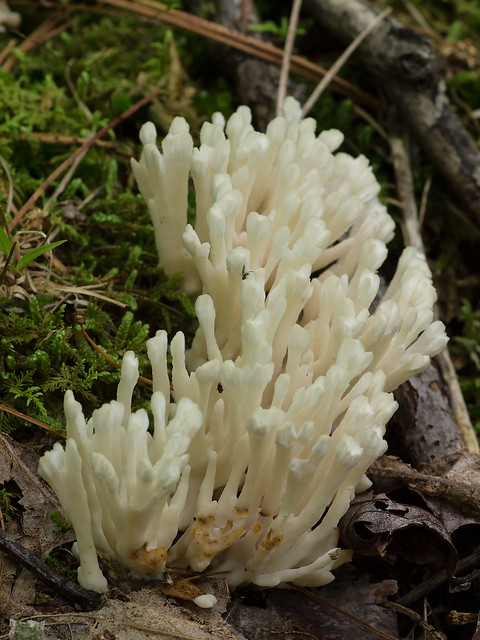 I understand that they are edible, but I’m not quite ready to try them out!

As I leave the woods and approach my truck, I spot a flash of blue on the gravel road. It is Limenitis arthemis astyanax or aptly called, a Red-spotted Purple Butterfly, taking mineralized water from the gravel road. Try as I might, it was almost impossible for me to fully capture the rainbow of iridescence on the lower portion of the wings. I must have taken two dozen shots of this critter from all possible angles, but this is the best shot I could come up with: 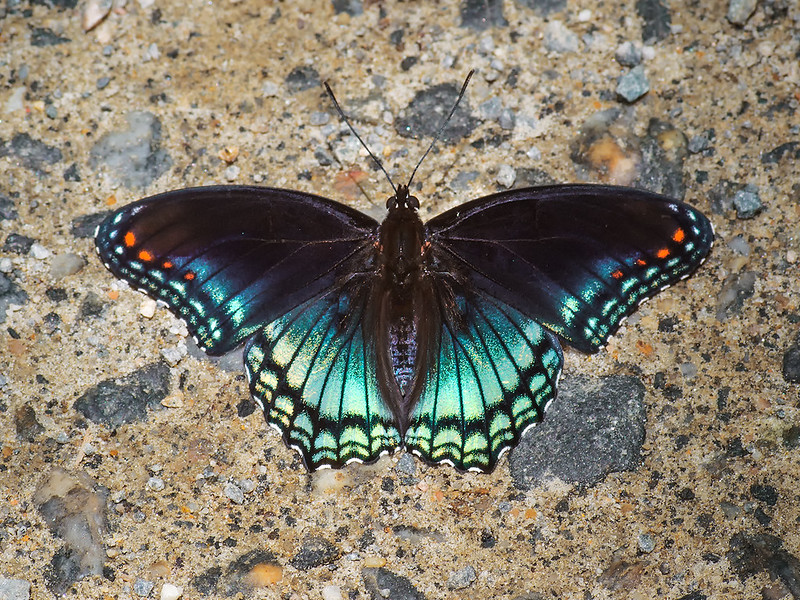 Finally, I was able to pack my gear in the truck and head back down the winding, Forest Service Road. When I reached the main road, I glanced to my right and saw a speck of pink on the ditch bank — I had to check it out. Turns out that the specks of pink were the many tiny flowers of Polygala polygama or Racemed Milkwort. These flowers are small, but up close, they are quite handsome. I suppose they have the appearance of orchids, but that is not the case:

Just next to them were large clumps of the tiny, white, Houstonia purpurea or Venus’ Pride. As I looked around the area more carefully, I saw many more clumps of this species:

I finished with the photography of these beauties, knowing that I had a very good day out in the field. So I packed up my camera gear and headed home. By this time, you know that I’m always open to capturing additional wildflowers that I come across on my forays into the field, so as not to disappoint, I’ll show you one last sighting — Aruncus dioicus or Goat’s Beard: 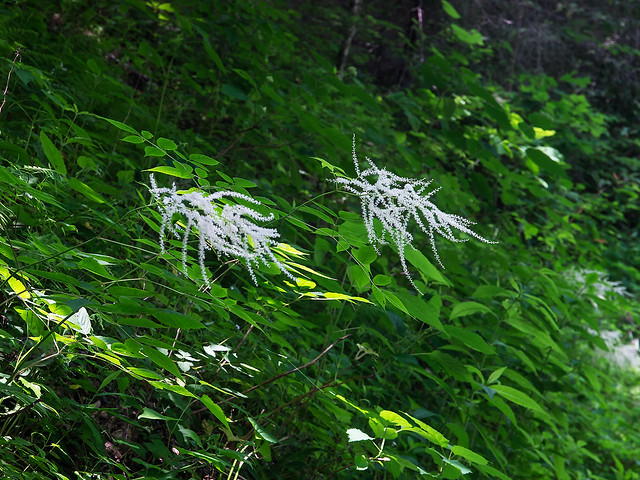 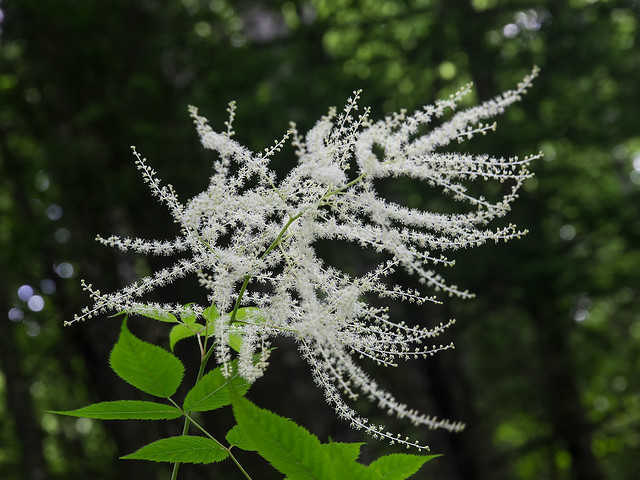 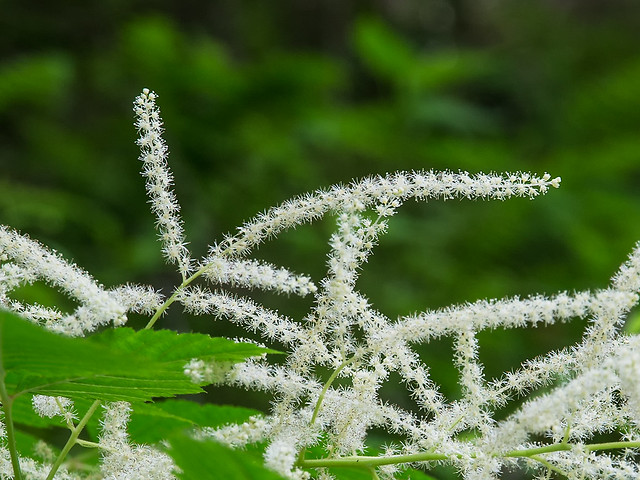 These particular plants were very easy to spot along the roadside. Where they were growing, however, posed some logistical problems. First, there was no where nearby to park, so had to travel on about 1/2 mile (~800 meters) to find a suitable pull-off. Once I unpacked my gear and walked back up the road to the plants, I realized that they were on a steep hillside about 10 feet (3 meters) above my head. Not only that, but to get close enough to them, I’d have to stand in a muddy, water-filled ditch which was precariously close to the road. Automobile traffic was whizzing by me, creating strong wind currents that made the plants sway vigorously to and fro. Finally, I managed to get a few shots of the flowers and decided that I had taken all the risk I was going to take to get them images. I would have liked to get a closer shot of the flowers, but with the wind and the traffic, it was virtually impossible.

So now I could end the day, satisfied that I had captured some interesting plant images for you folks to enjoy. Being retired and able to go out at a moment’s notice is special. It allows me to pick and choose times and places that I would otherwise have to forego or wait until a suitable time away from work. This “amusement” of mine really takes me to a spiritual centering that I’ve been unable to experience in any other way. It puts me in my happy place where I can be very far away from the anxiety and stress of every day living. Plus, it’s a lot of fun…!