Trout lilies in the upstate of South Carolina: some of the first wildflowers of the season — 2015-03-03

As Spring is trying to figure out her way onto the calendar, a 65 degree (F) or 18.3 degree (C) day beckoned us into the field to locate and photograph the first wildflowers of the year. For those of us who live near the mountains of South and North Carolina, that wildflower is the diminutive but beautiful Erythronium umbilicatum or Dimpled Trout lily.

[Botanical stuff follows:] There are two species of Erythronium that are found in this general region: E. umbilicatum and E. americanum. They are confusingly similar, and the best way to tell them apart is to observe the fruiting body and the way that it presents itself. If the fruit/capsule is rounded and held erect off the ground, then it is most likely E. americanum. If the fruit/capsule is indented/dimpled and rests on the ground on a reclining stem/peduncle, then it is most likely E. umbilicatum.

However, the flowers we observed were just opening, and the fruiting bodies won’t be present until weeks ahead, so what characteristics can I use to figure out what we are seeing? Well, there are some other useful features that might lead to a correct labeling. The two that come to mind are as follows: 1) E. americanum has stigma lobes which are erect or slightly recurved while E. umbilicatum has stigma lobes which are spreading; 2) E. americanum has 1-3 stolons per 1-leaf plant while E. umbilicatum has only a single or no stolons per 1-leaf plant. Although there were many hundreds of plants (most not in bud or in bloom) in the immediate area, I am loath to dig plants just to observe their root structures. I just don’t do that. So… I will use the features of the stigma to tell me that what we saw and photographed were, in fact, E. umbilicatum. There you have it!

Here is an image of the flower and leaves of the Dimpled Trout lily: 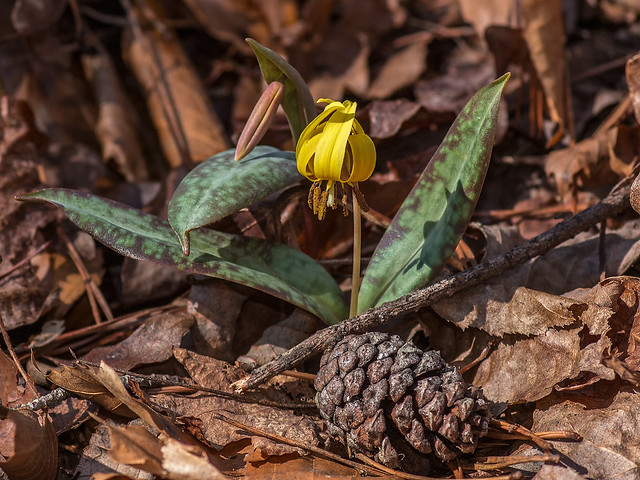 In our region of the Southeast, the Dimpled Trout lily is only about 3 inches (7.5 cm) tall. But in other areas, it may be 5 or 6 inches (12.5 or 15 cm) tall. However, one truth holds for these plants: only plants with two leaves (rarely three) will produce a flower. It takes several years for a plant to produce more than just a single leaf. I understand that newly sprouted seeds take up to seven years to mature to the flower-bearing stage.

In other blog entries, I mentioned that the common name, Trout lily, comes from the pattern and coloration of the fantastically marbled leaves: 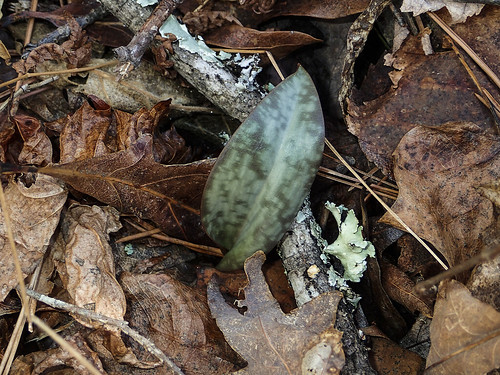 To some, (apparently to the person who gave it the common name), the leaves resemble the coloration and pattern found on our resident Salvelinus fontinalis or eastern Brook Trout. I’m not an avid fisherman, but from looking at pictures of the eastern Brook Trout, I can see the similarities.

Another characteristic item to note is the presentation of the flower. I’ve observed that the flowers will not fully open on an overcast day, and even on days when you find them open to their fullest, they will begin to close in the late afternoon. Even though they prefer to grow in a shady environment, only a glorious spring day will bring fully opened flowers. Unfortunately for us who have just this single species of Trout lily to admire, we have to live with the fact that 99% of the open flowers will always be pointing toward the ground. Occasionally, one can find a flower that didn’t read the text book, and it will point forward and make it much more easy to photograph. Here is one of those which is photographed from both the front and the back:

One other thing that you will surely notice about the flowers in my images, is that some of the tepals (similar appearing petals and sepals) are very strongly recurved upward. It is thought by some that those flowers growing in stronger light will display the characteristic of strongly recurved tepals.

Here are a few images of those flowers with recurved tepals: 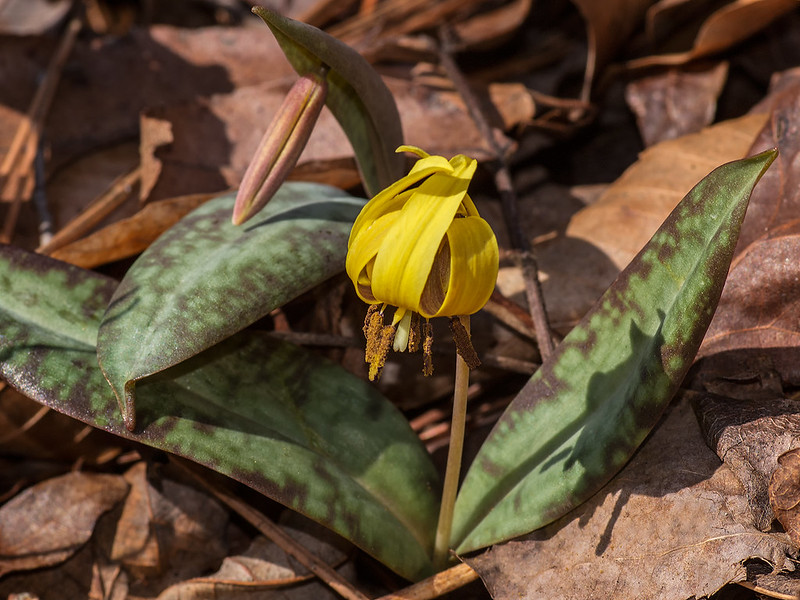 Most of the flowers, however, will fall somewhere between having straight tepals and having strongly recurved tepals. Here are some additional images of this bright yellow wildflower:

Perhaps I will go back to one or both of these locations in a couple of weeks when there will be more open flowers to photograph. In any case, it was not only fun but refreshing to get back out into the field where I find it easy to share communion with the natural world. It is a place for me to recenter my life and to reconnect to that part of the natural world where I can lose myself in the beauty of color and form. The next few weeks will explode with both color and form, and I will do my best not to miss a single one of those explosions…