Continuing yesterday’s post: The second native orchid species that we found in the sky islands of the Huachuca Mountain Range is Malaxis corymbosa or Huachuca Mountain Adder’s-mouth orchid. The Native Orchid Conference field trip planners had located several sites for this rather infrequent visitor, but it was in bloom in only two of them. Although it is widely scattered in northern Mexico, it has been found in only two counties in Arizona: Cochise County and Santa Cruz County.

To this blogger, Malaxis corymbosa closely resembles another Malaxis species that is found mainly in the eastern United States and a few counties in extreme eastern Texas, Oklahoma, and Kansas — Malaxis unifolia. It is also found in the provinces of eastern Canada. The obvious difference, though, is flower color. Malaxis unifolia has medium to dark-green flowers while Malaxis corymbosa has yellow to yellow-green flowers. Another significant difference is in the way the flowers are presented. The flowers of Malaxis unifolia start out as a corymb, but the stem continues to extend until all of the flowers have bloomed. The flowers of Malaxis corymbosa remain more or less corymbose for the entire bloom period. Here is an example of both species to show the differences mentioned: 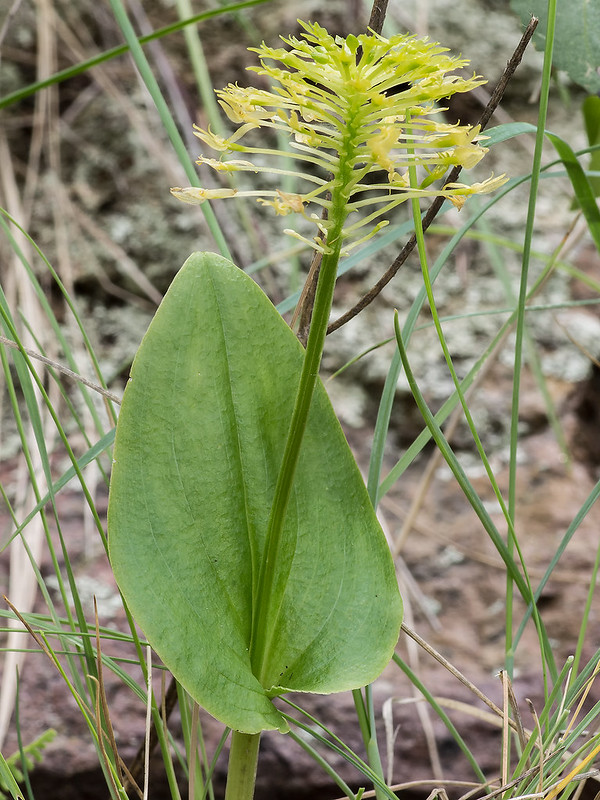 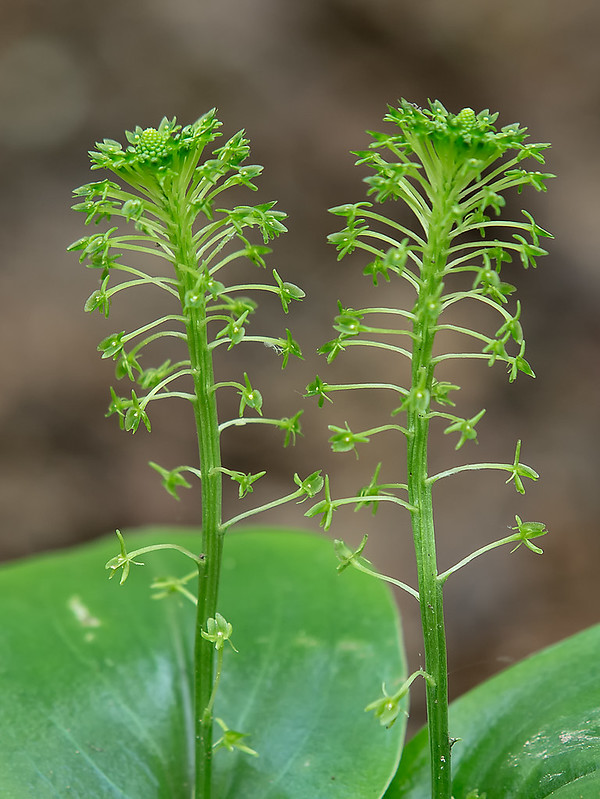 As I mentioned in the previous post, the trip up Carr Canyon Road was exciting. When we finally made it to the Malaxis corymbosa site, we were ready to get out and see some orchids. We stopped at a good spot for Malaxis soulei first. Here we saw quite a few nice specimens, most in great shape. While we were photographing these, Stefan Ambs (a member of our field trip party) decided to scout out a couple of spots for Malaxis corymbosa. Nearby, he found a site that had about a dozen plants. Only one was in flower while the rest were only immature plants — sort of a “nursery” for this orchid species. This will be a great spot in another year or so. We left this spot and walked back in the direction we had come until we came to a steep, boulder-filled wash. Stefan had scouted out this site and informed us that there were blooming plants in the wash “just up the hill”. Well, let me tell you, just up the hill was about a 100-yard (100-meter) climb at about a 40-degree angle that challenged even the more robust of our group. He was up the hill before any of us got a good start. This is a tale of the rabbit and the hare in the sense that most of us made it to the orchid spot, but we definitely took our time.

The single blooming plant was situated In a small grassy spot between two large boulders. In order to properly photograph it required a delicate balance on the downhill boulder which sloped at a precarious angle. I managed to plant myself and my tripod for a couple of quick shots. The first one is the image appearing at the beginning of this blog report. Here is the second shot: 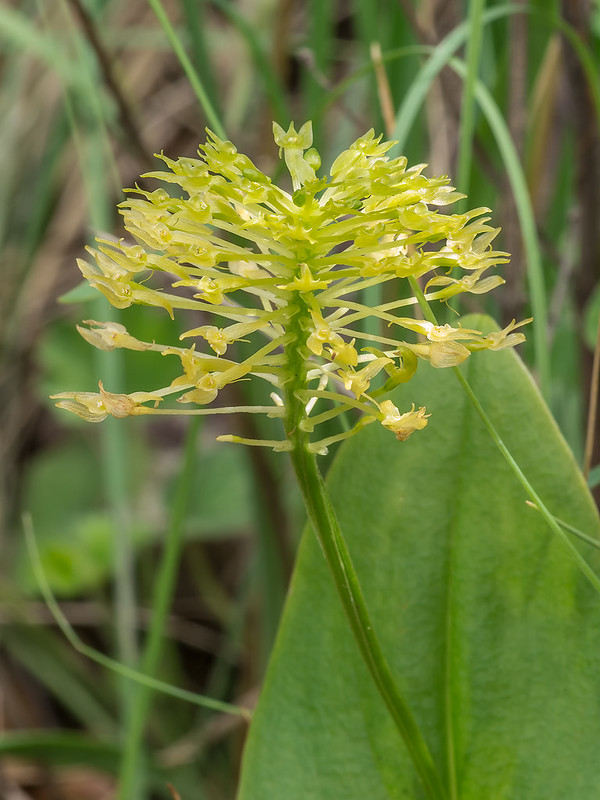 While several of us were photographing this one large specimen, Stefan was scouting the immediate area. He found a small group of three additional plants in full bloom about 15 feet (4.5 meters) from the first find. We took our turns photographing these plants. They were situated at such an angle that the only good shots were from directly above. Here are a few shots of those particular plants: 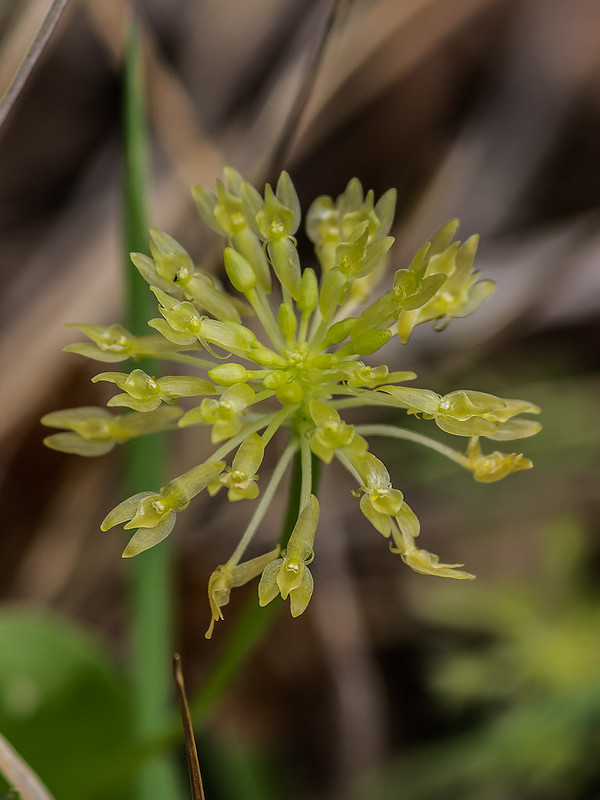 Notice how translucent the petals are. These flowers are less than 1/4 inch (~5 mm) long — tiny in comparison to those of some of the other native orchid species one might come across. Most of the Malaxis species we would be seeing in Arizona, however, had even smaller flowers.

Walter Ezell took this image of Diane Allen pointing to the large flowering orchid plant on top of the boulder: 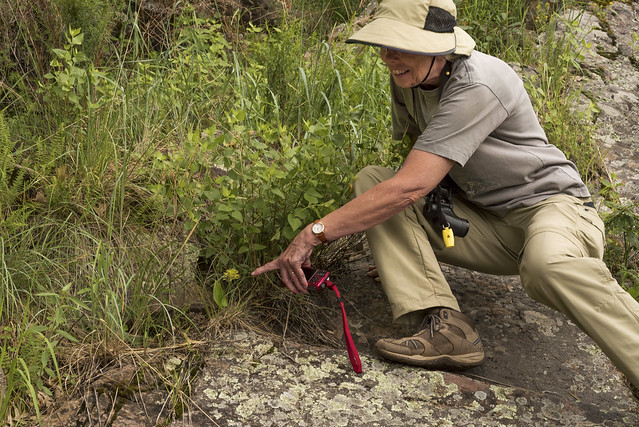 Here is a shot of Cathy Bloom with her camera equipment precariously position over a nearby patch of blooming orchids: 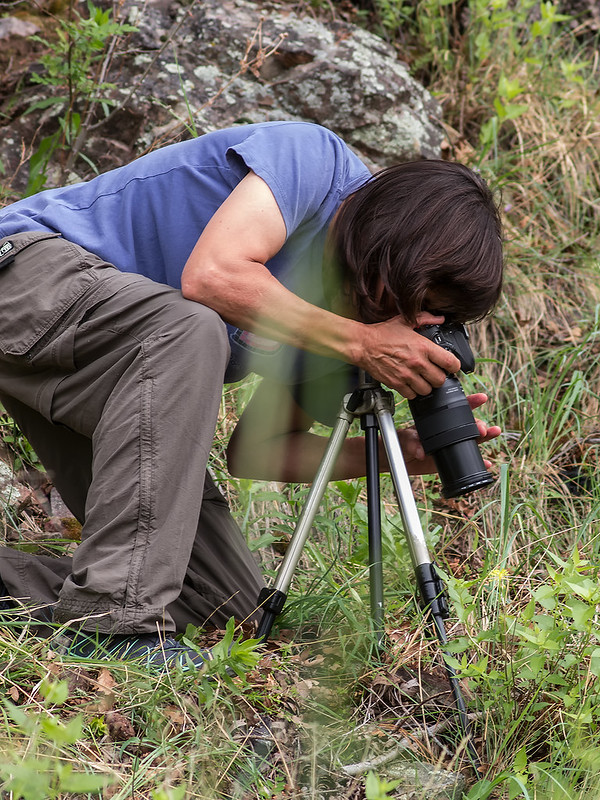 The rest of the group was slow to come up the mountain. We were soon to discover that they had found a small population of plants to the left of the wash. Everyone that desired to finish the climb to the top location had a chance to photograph these fine specimens. We finally finished our photography and headed back down the wash. On the way down, I found the site for the other population and set up to take a few images. Here are two images of the best of the bunch: 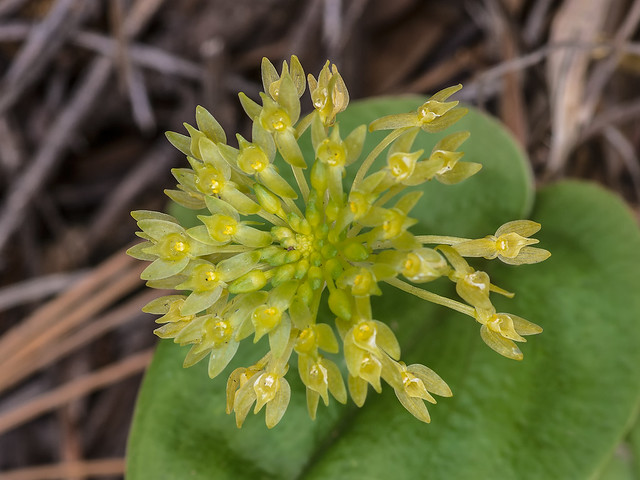 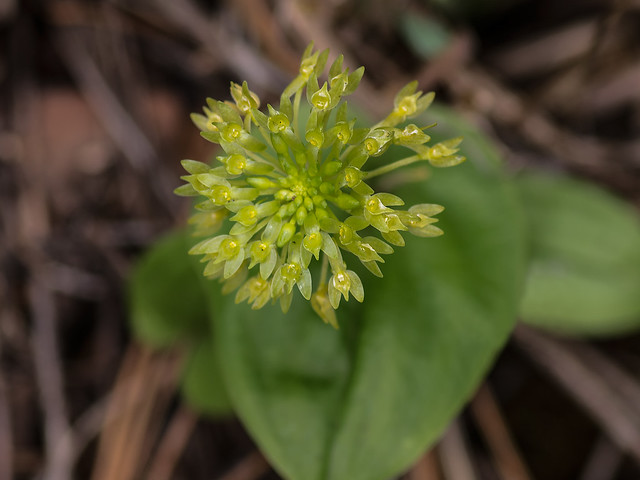 Only one of the plants was of respectable size; the other 3 or 4 of them were much smaller and not positioned well for photographic purposes.

We reluctantly made it to the bottom of the wash in one piece, glad that we had located and photographed this unusual orchid species. On the way back to the vehicles, I decided to photograph one of the nursery plants that was in tight bud. Here is the result: 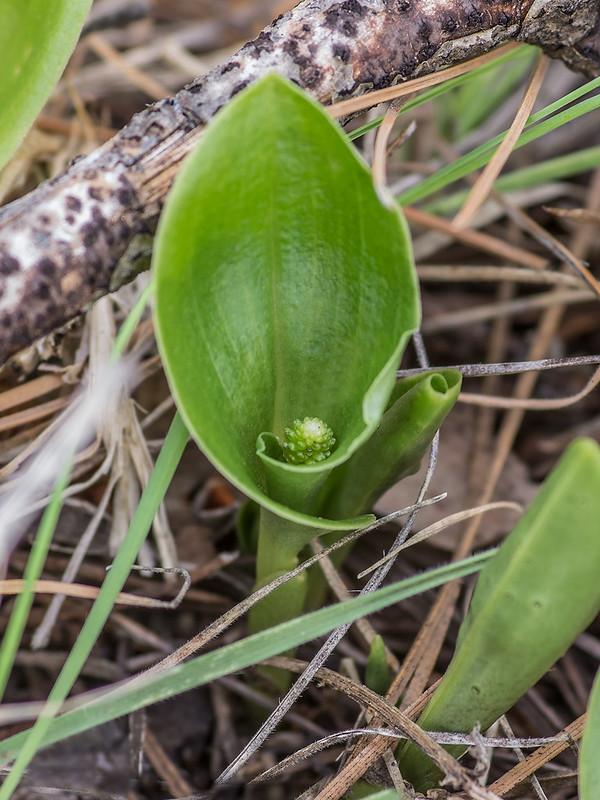 This was another one to strike off my life list. There was another site for these plants in the Chiricahua Mountain sky islands, but it was not to happen for our field trip group. There had been a series of thunderstorms the day of that scheduled field trip, and the stream separating the plants form the access road was impassable. It was good that we had found the plants in the Huachuca Mountains on our first day out in the field.

The featured orchid species for the next post is Malaxis abieticola or Arizona Adder’s-mouth orchid. Stay tuned…