The third native orchid species that we were introduced to at the 2016 Native Orchid Conference symposium in Arizona was found in the sky islands of the Chiricahua Mountain Range. It is Malaxis abieticola or Arizona Adder’s-mouth orchid. The species name, abieticola is made up of two Latin words: abiet => fir tree; cola => dweller, inhabitant. This makes so much sense, because the plants we found were “dwelling” in the shade of spruce (fir) trees. This is another one of those orchids which is relatively common farther south in Mexico but has been found in only two counties in extreme southern Arizona — Cochise County and Pima County. It grows at an elevation of 8,000-9,000 feet (2,400-2,700 meters).

As is typical of most of our Malaxis species, it has a single, clasping leaf and a non-branching stem with the flowers appearing at the apex. According to Ron Coleman’s book, The Wild Orchids of Arizona and New Mexico, Malaxis abieticola can have up to 40 flowers per plant. One confounding characteristic of this species is that the flowers can be seen pointing in every imaginable direction. This, coupled with the 3-dimensional aspect of the inflorescence, makes it quite the challenge to photograph. In any case, we did photograph a number of these orchids with differing results. Here is an image of two of the plants we found: 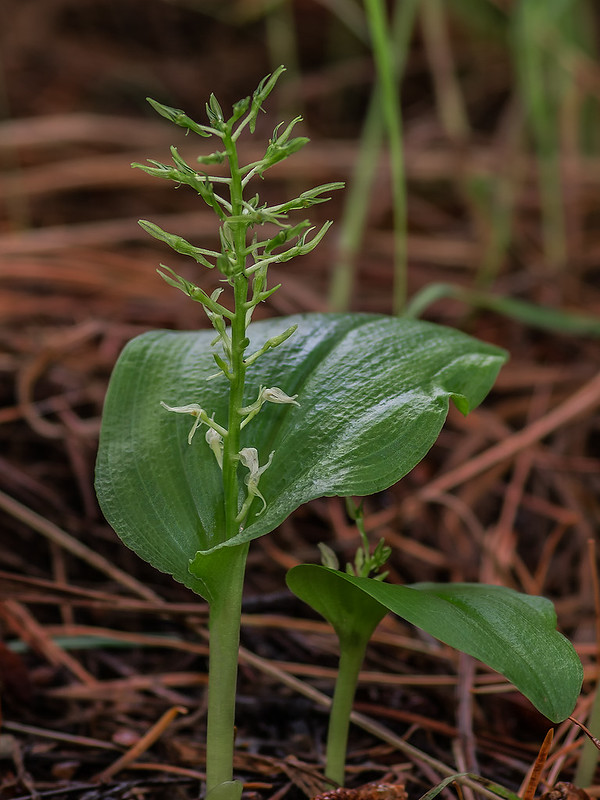 The tiny green flowers of this orchid must be magnified in order to be appreciated — even then, it is difficult to see the petals. Here are a couple of close-up shots that show the dark green stripes on the pointed lip: 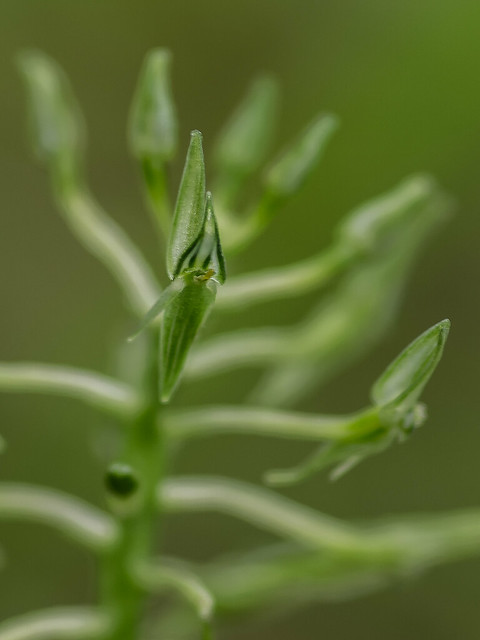 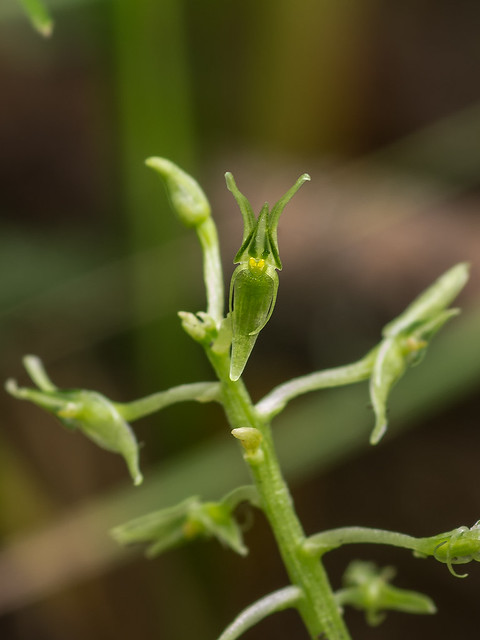 Just in the case that you need a reminder of the three sky islands we visited during the symposium, here is the map: 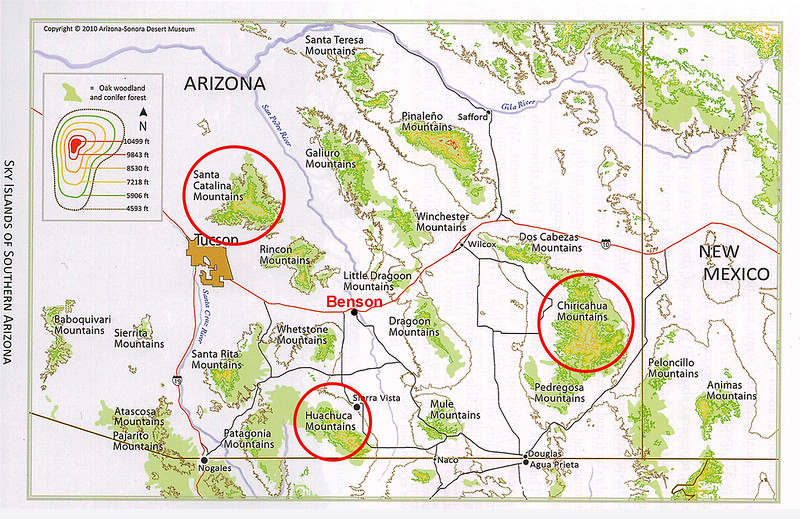 In order to get to the orchid site toward the top of the Chiricahua Mountain range, we were forced to cross several washes. Since some of us were driving 4WD vehicles, it wasn’t a problem. The day we visited as a group, all of the washes but one were dry, and driving across them was merely a bumpy nuisance. To get to the base of the mountains, we had to travel on a dirt road that was a virtual washboard. I knew that by driving at a certain speed, the bumps seem to level out. By driving at a slow speed, the jarring is almost unbearable. Well, our lead vehicle was driven by someone who apparently was not familiar with washboard roads, and it was all I could do to keep the fillings in my teeth. Once we began to climb the mountain, the road became quite narrow, but was in better shape that the road we took up in the Huachuca Mountains two days previous. However, that was only until we got to the steep part of the road…

We finally reached a camping area that had a gravel parking lot, and that is where we made the decision for one of the drivers who had a reliable 4WD vehicle to ferry the others up the mountain about 1 mile (1.6 km) to the orchid site. It was not a long wait, and once we began the trip up the steep road, it was rather exciting — steep vertical cliff on the right and steep vertical drop off on the left — driving on a two-track road with no guard rails. About .25 mile (.4 km) from the destination, there was a huge tree across the road. We had to gather our gear and walk the rest of the way. That turned out to be a good thing, because there were various colorful wildflowers lining the road, and we took our time taking pictures. I’ll be posting some of these in a later post.

I have to mention here, that there were several Forest Service crews felling large trees that had burned in a recent wildfire on the mountain. One member of our group put in a request for a couple of the crew to come up the mountain and remove the tree from the road. It worked! While we were photographing the orchids, we could hear chain saws in the distance, and when we walked back down the road, the tree was gone.

All was not hunky-dory though, as soon as we reached the orchid site, it began to rain. Actually, it rained hard, very hard. I managed to get a few shots of the plants, but I made plans in my mind to return after the symposium to get better shots. Here is a group of images showing a few of the dozen or so plants we saw at the site: 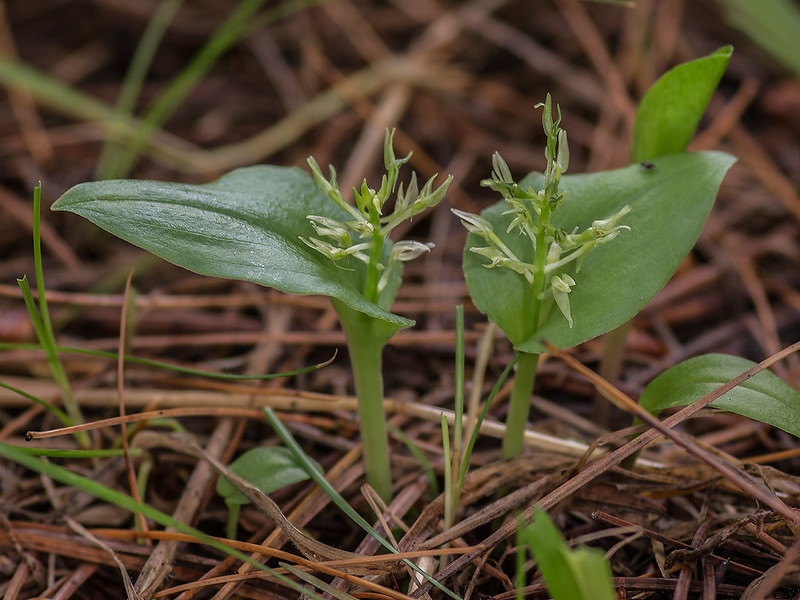 We were hoping that someone would come back up the mountain to pick us up, but it didn’t happen, so we walked back down the mountain in the soaking rain. How Bob Sprague managed to smile while being soaking wet is beyond my imagination: 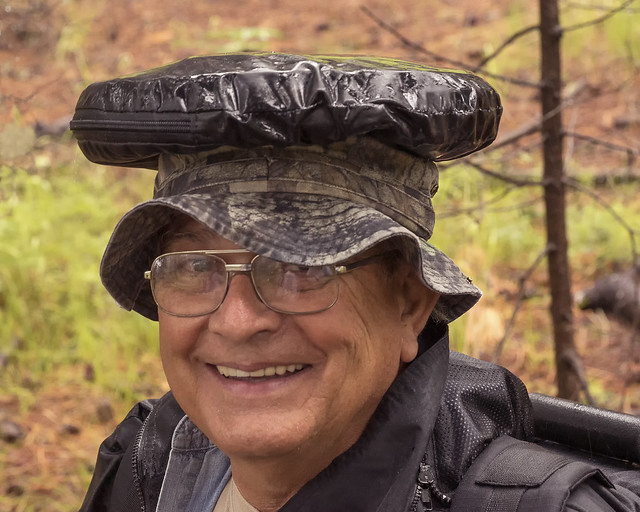 I don’t believe that the zipped, reflector he was wearing on his head was keeping him very dry…

On Friday, after the symposium had ended, we made the hour-long drive back to the Chiricahua Mountains to revisit the site in good weather. We arrived at the campsite parking lot, gathered our gear, and proceeded to make the mile-long hike up the mountain. We photographed more of the wildflowers along the way and finally made it to the orchid site. We had just about finished our photography when I heard lightning in the distance — not a good sign in the mountains. So we put ourselves in high gear and started our way back down the mountain.

Just as we were nearing the parking lot, several bolts of lightning struck just down the hill. We wasted no time in getting to the car. As we began the drive down the mountain, the bottom dropped out of the clouds with heavy rain and marble-sized hail. At every curve, water was pouring down the slope and washing across the road. I remembered one of the wet washes that we had crossed and was nervous about having to cross it again with the additional rain adding to its flow. When we reached the wash, it was no different than when we had crossed it earlier that morning.

I immediately felt relieved that we would have no problem getting back to the main highway. Little did I know that the shallow, wet wash we drove through was on the dry side of the mountain, and it did not get much of the severe thunderstorm we had just experienced. By the time we reached one of the previously dry washes that we had to cross, here is what we saw: 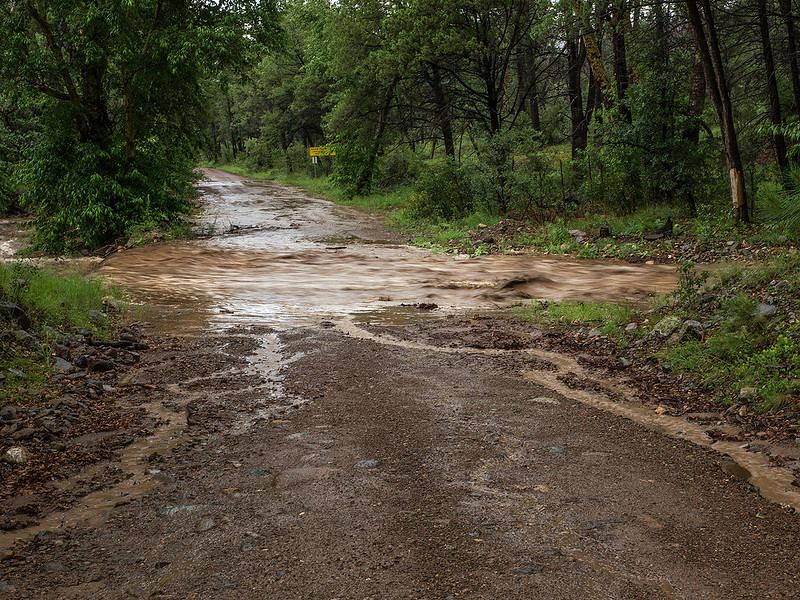 Here is a close-up of the rushing water: 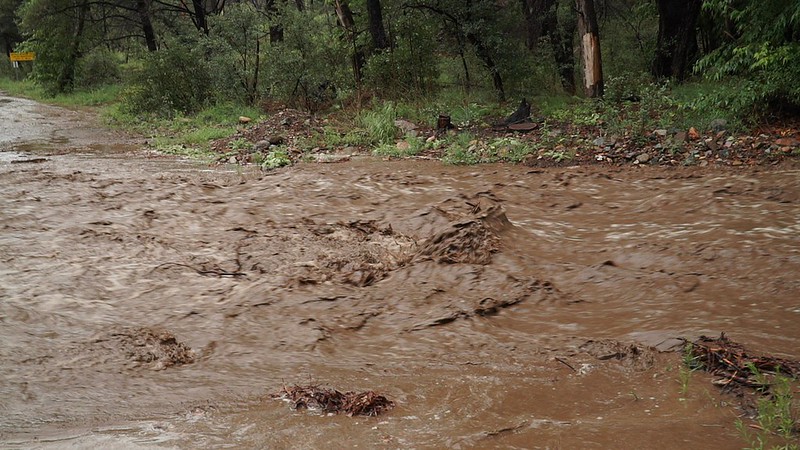 We estimated that it was about 15 feet (4.5 meters) across and about 3 feet (1 meter) deep at the deepest point. I surely would not be driving across this mess. We discussed what our options were, and it was not a comforting thought. We decided to try to wait it out, hoping that the water level would go down, but after 2 hours, it had gone down a little more than 1 foot (30 cm). About that time, a car drove up from behind us, and the driver took a look and decided to head back up the mountain. I suppose he was camping and could wait it out at his campsite. After another 20 minutes, a large SUV with a California license tag drove up behind us, and after looking over the situation, the driver said he would attempt to cross the flooded wash. We held our breath as we watched his vehicle plow through the water and it didn’t look too bad, so we decided that it was now or never for us. With a lot of spray (and a silent prayer) we made it through the water, and I figured we were out of trouble.

About a mile farther down the road, we rounded a curve and here is what we saw: 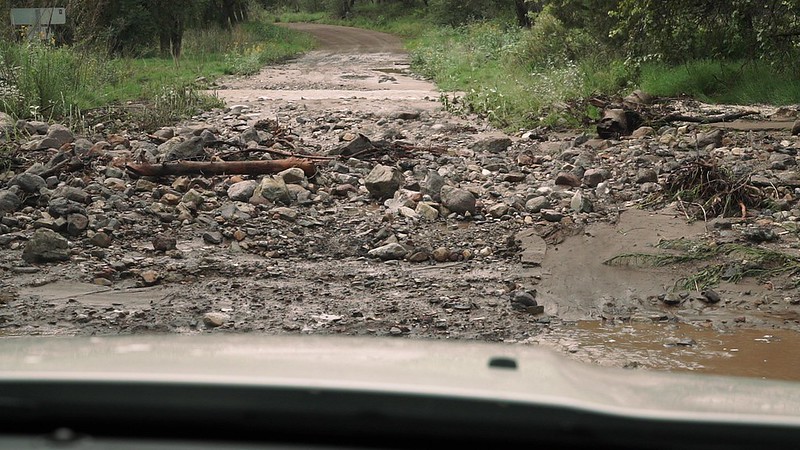 Not much water left, but large boulders blocked the road. These boulders were up to 12 inches (30 cm) in diameter, and I knew without a 4WD vehicle, we would really be stuck for the duration. We took stock of our options and decided to attempt to roll the boulders out of the road as well as we could. There was no way we could pick up the larger ones, so roll we did. We managed to clear (sort of) a path through the boulder field, and we crossed our fingers and drove slowly though the debris, scraping bottom several times. Just on the other side of the boulder field was another flooded wash (you can see a bit of it in the picture). Since the California SUV was nowhere in sight, we didn’t know how deep the rushing water was, but it was only about 8 feet (2.5 meters) across. We made the decision to go for it. With much splashing (it was deeper than we thought), we made it across. Just as we made it to the other side, we met a group of three vehicles that were led by a pickup truck. We stopped next to the truck, and I spoke to the driver. She said that she and the other people were there to do some birding. After we told her of our experience, she and the rest of the group decided that it would be better if they came back another time. Good answer!

Well, what can I say? It was an exciting time for us, but I wouldn’t want to do it again — not without a 4WD vehicle.

Another orchid to add to my life list. The day started out with a blue-bird sky and by lunch time deteriorated into a near calamity. I suppose that is to be expected in monsoon season in Arizona. But, we made it through. It probably was not a good idea to risk the drive through the water, but all’s well that end’s well.

The final Malaxis species that we saw on the scheduled field trip, Malaxis porphorea or Purple Malaxis, will be featured in the next blog report. Stay tuned…