The next day after our adventure along the Blue Ridge Parkway, we headed west toward a place called the Roan Highlands. The USDA website states, “Roan Mountain is actually not one mountain, but a high ridge about 5 miles long. It ranges from a height of 6,286 feet at Roan High Knob to a low of 5,500 feet at Carver’s Gap. No one knows the origin of the mountain’s name. Some claim the name refers to the roan or reddish color of the mountain when rhododendrons bloom in June or when the mountain ash berries appear in September. Others say the name comes from Daniel Boone’s roan horse, because he and his horse were frequent visitors.”

Currently, Carvers Gap is a large parking area (probably not large enough for the mid-summer traffic), and is traversed by the Appalachian Trail. We arrived and parked in one of the few spots that was empty. I had made up my mind not to go home without seeing the three big attractions: Rhododendron catawbaense or Catawba Rhododendron; Rhododendron calendulaceum or Flame Azalea: and Lilium grayii or Gray’s Lily. Roan Highlands is especially noted for its large expanse of Catawba Rhododendron, which unfortunately for us, was in peak bloom the week before our visit. 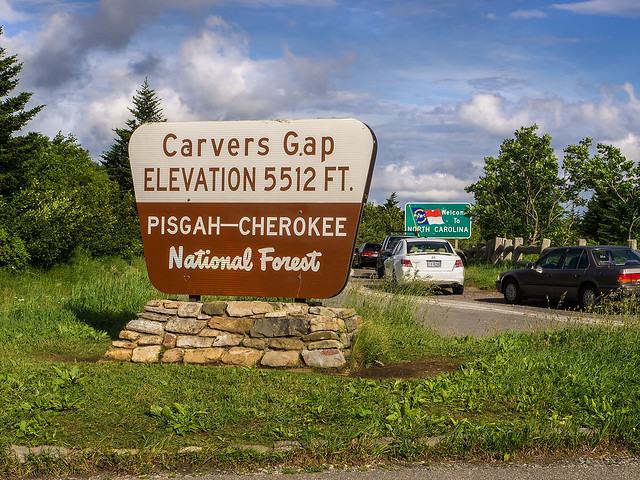 So, we gathered our camera gear and headed off to the trail head. Although the Carvers Gap sign reads “ELEVATION 5512 FT.” (approx. 1680 meters), we still had a climb of around 500 feet (150 meters) to reach the top, where we were told we would find the Flame Azalea in bloom, and “maybe” some of the rare Gray’s Lilies in bloom. This unimproved path is actually part of the 2180+ mile (3500+ km) Appalachian Trail that runs from Georgia to Maine. The hike took us up a grassy meadow where there were a couple of remaining Catawba Rhododendron still in bloom. The large expanse of this species had already bloomed out and almost no flowers were showing. Seeing what little remained, just piqued my resolve to catch it in its full glory next year. Here is a taste of this lovely Rhododendron: 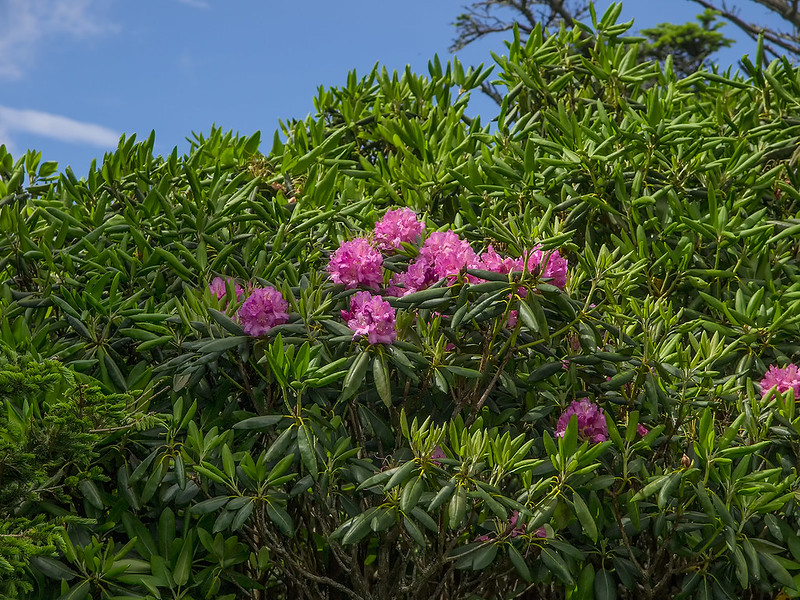 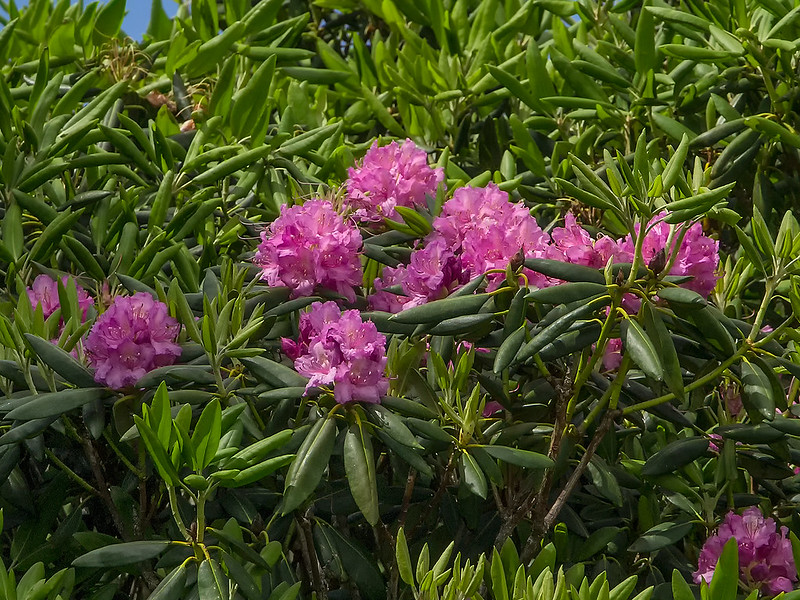 About halfway to the summit, we entered a dense, Red Spruce-Fraser Fir community. We went from bright sunlight into very deep shade in just a matter of steps. Just as we entered, I spotted a flash of red in the tiny amount of sunlight that penetrated the branches of the conifers. This turned out to be the Lilium grayii or Gray’s Lily I had come to see. It is found in only a handful of counties composed of the highest ridges in North Carolina, Tennessee, and Virginia. Here is what I saw: 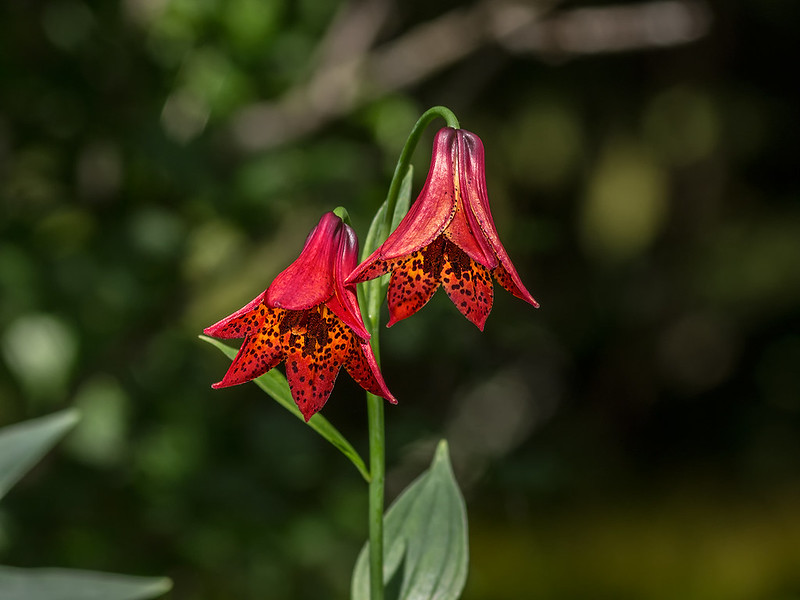 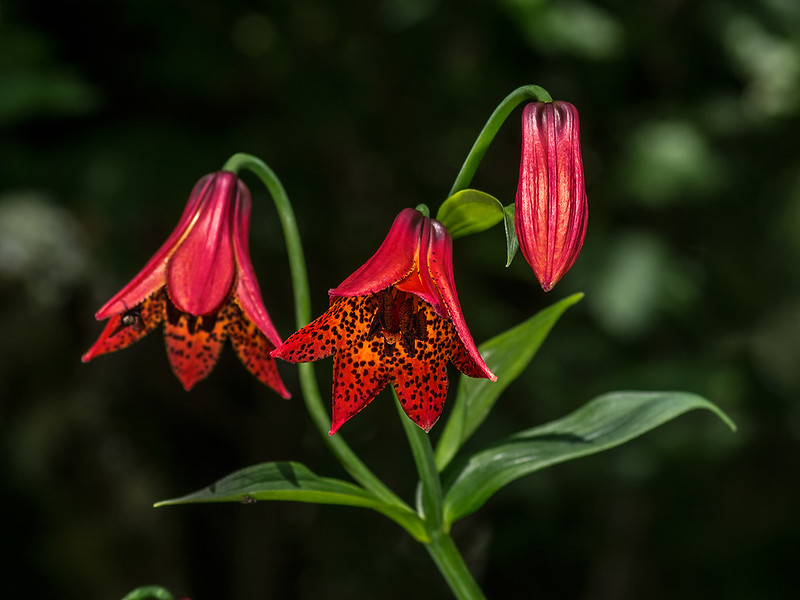 The blood-red outer portion of the sepals and petals gives no clue as to the darkly spotted and orangey-yellow interior. What a spectacular flower! I did use a bit of fill flash to emphasize the interior colors — otherwise, they would not be evident in a “normal” snapshot.

Inspired by this find, we plodded up the trail until we reached the summit. We had been told to continue over the top of the ridge until we began the decent to the east. We did just that, and it was here that we began to see what remained of the Rhododendron calendulaceum or Flame Azalea display. Flame Azalea usually puts on its best show early on, before the plant is fully leafed-out. The leaves on the plants ahead of us had already put on its summer leaves, but many of the plants still held their vibrant flowers. The colors range from a pure, lemon yellow to a deep, scarlet-orange — and everything in between. Here are some of the Flame Azalea flowers we were able to photograph. Also note the spectacular Blue Ridge Mountain scenery that is its backdrop:

Update 2017-06-29:I have been told (by someone who really knows their stuff) that these gorgeous Azaleas are probably Rhododendron cumberlandense or Cumberland Azalea. They don’t bloom until their leaves are present, and they generally prefer full sun, whereas Rhododendron calendulaceum bloom before their leaves are present and prefer to be in the woods or just on the edge of the woods. I really appreciate my knowledgeable readers — you guys never let me down. 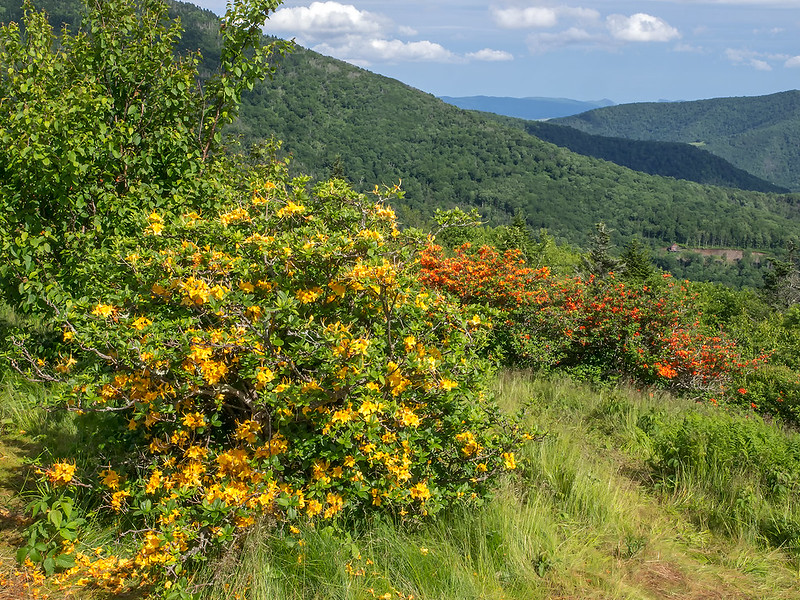 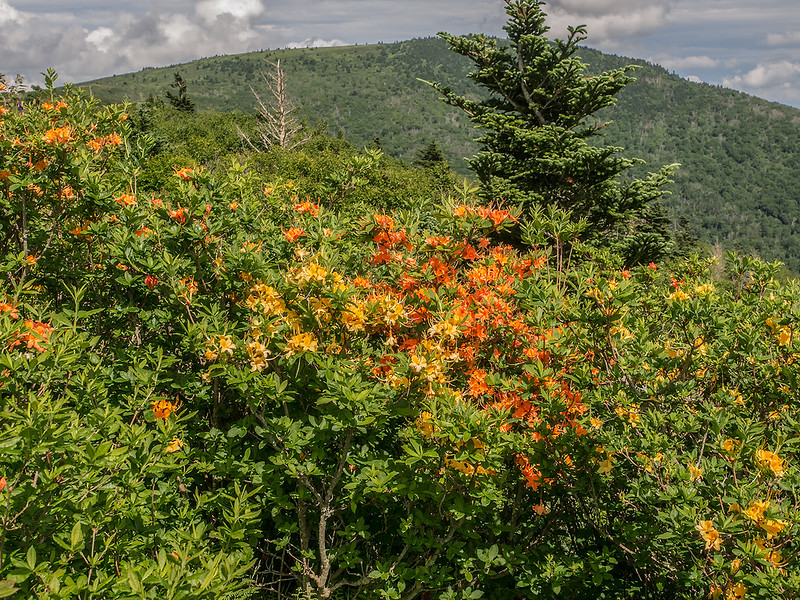 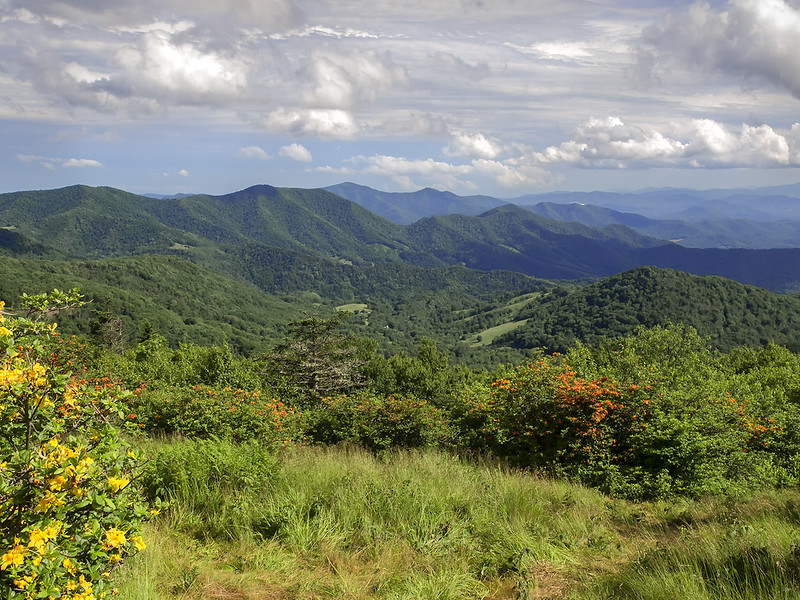 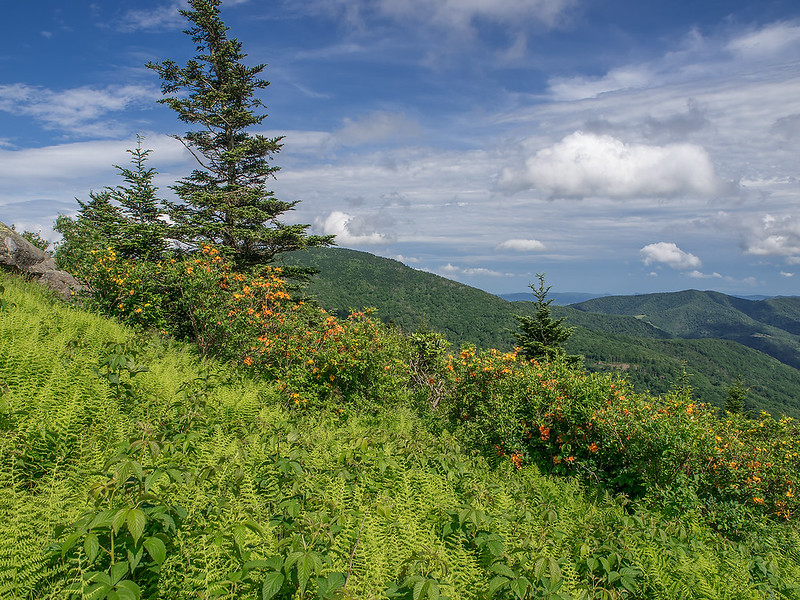 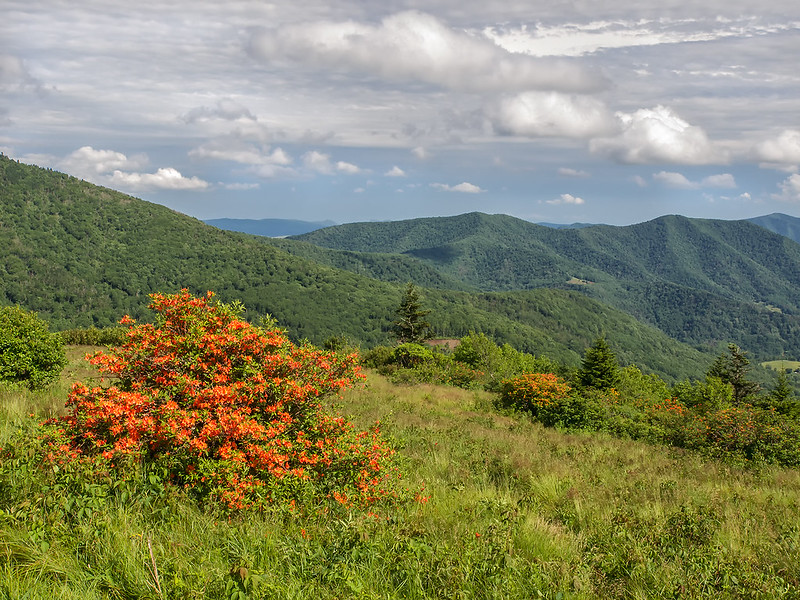 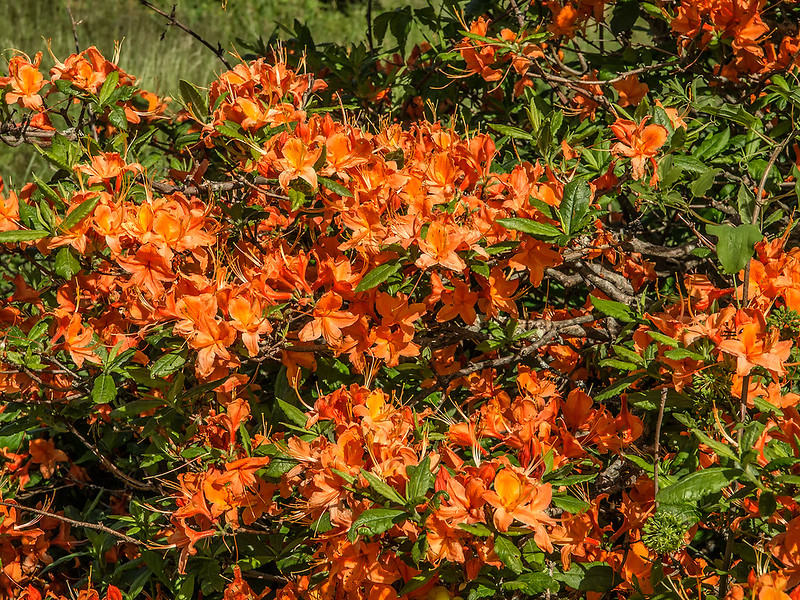 Here are a few more shots of the grassy bald with the high, Appalachian Mountain range in the distance: 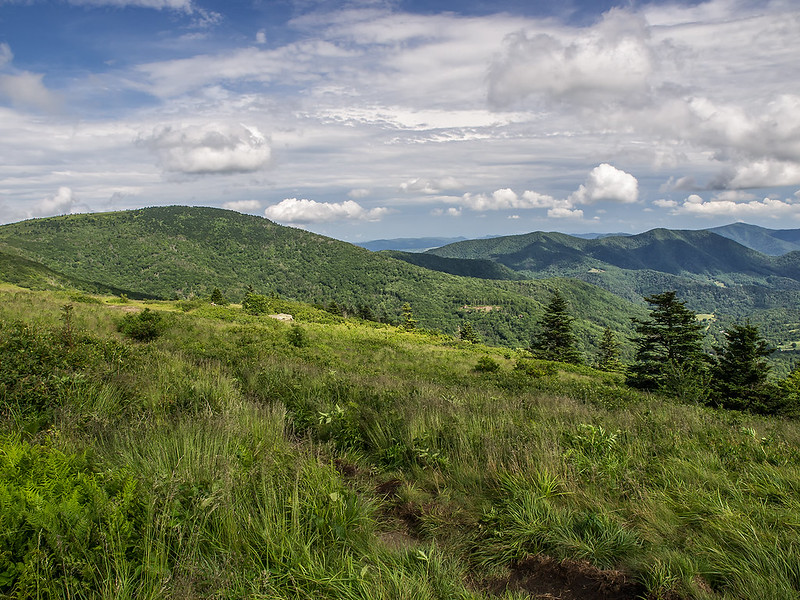 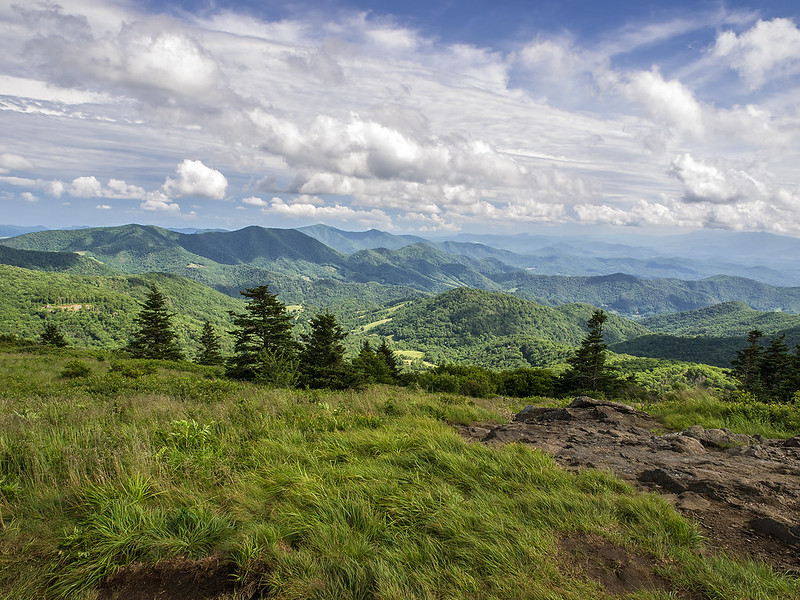 While I was photographing the Flame Azalea, I noticed a few more Gray’s Lily plants in full bloom: 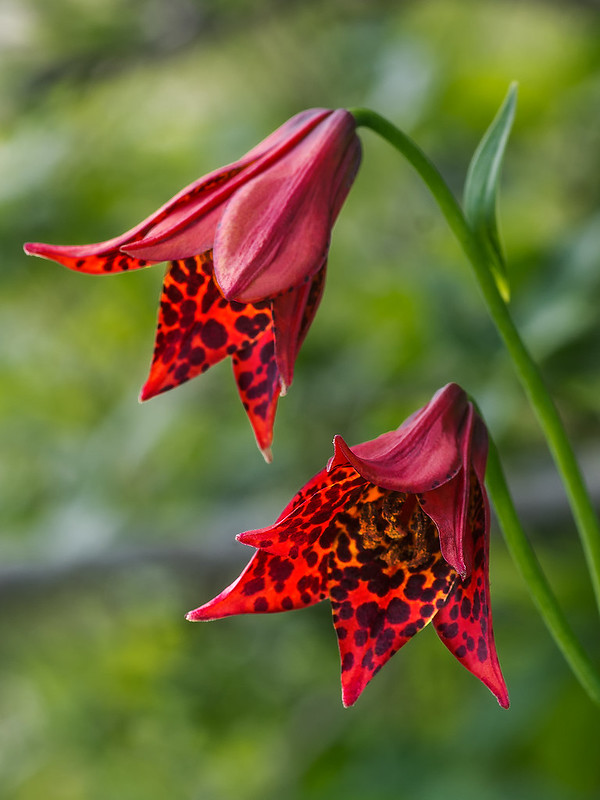 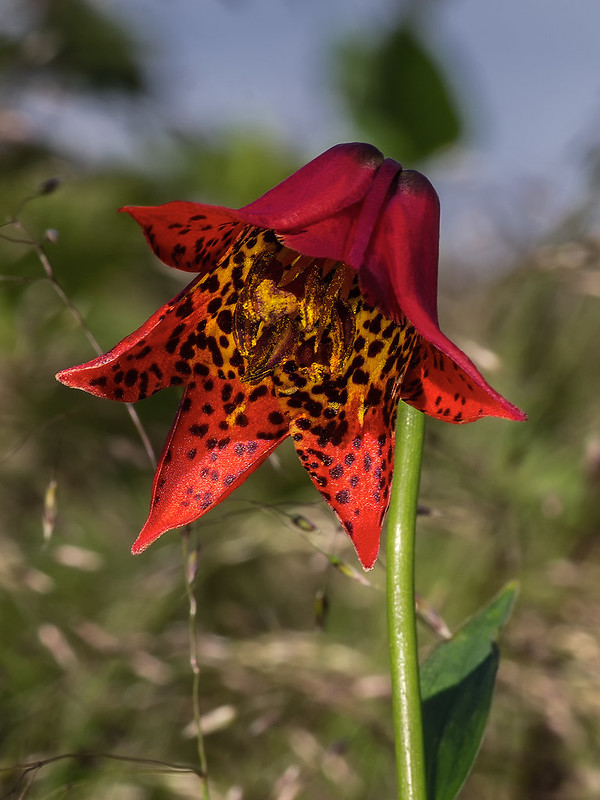 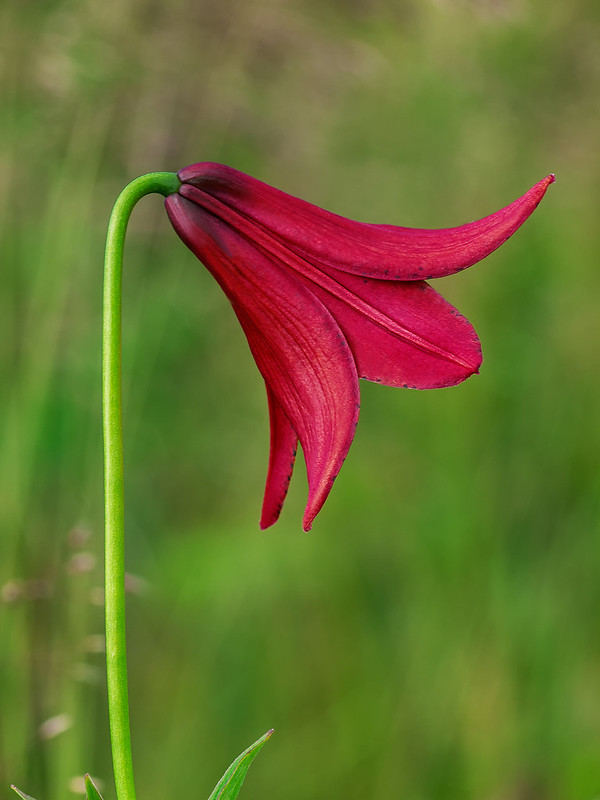 For this last shot, I didn’t have to use fill flash, because it was backlit by the sun: 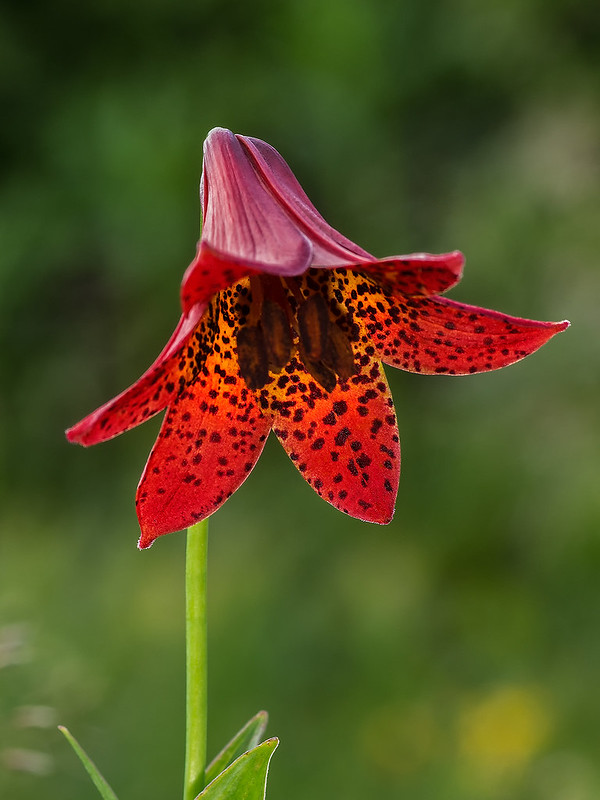 Another scene was to the east as the Appalachian Trail headed north from Round Bald into Engine Gap towards Jane Bald, in the distance: 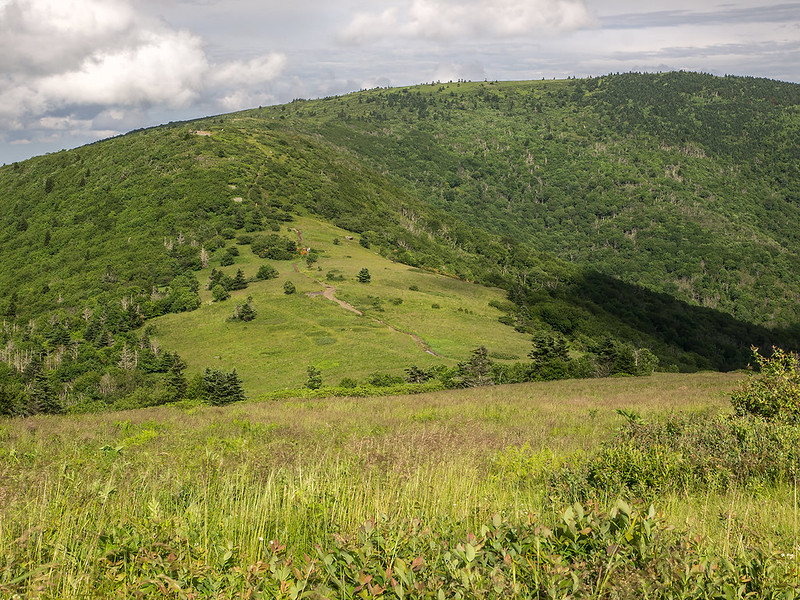 It was getting to be late in the day, and the cold wind and clouds were fast approaching. So, we headed back to the truck at Carvers Gap. But, I had to take one last shot looking west at the silver lining in the clouds which was a fitting highlight our first trip to the Roan Highlands: 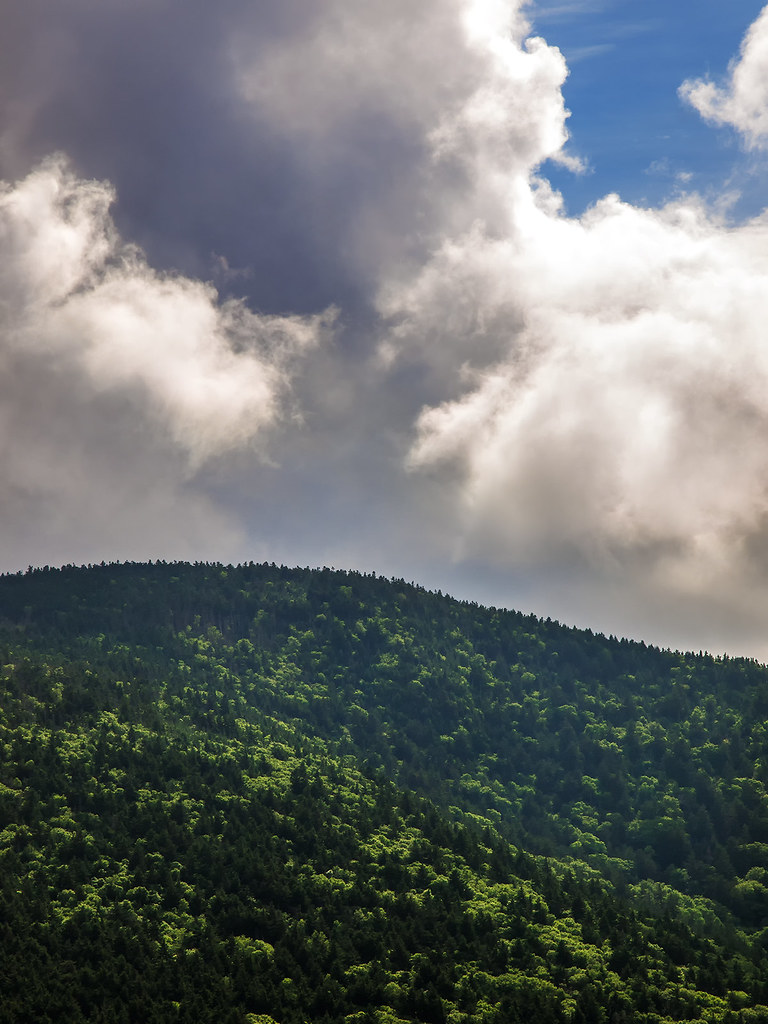