For many years, I’ve wanted to study and photograph a particularly uncommon, federally Endangered plant species which grows in the longleaf pine savannahs along the Carolina coastal plain. This plant species is Schwalbea americana or American chaffseed. According to Wikipedia, “…[it] is the sole species currently classified in the genus Schwalbea. It is an erect, hemiparasitic, perennial herb in the broomrape family. It is native to the southeastern United States where it is found in wet acidic grasslands. This species has declined tremendously from its historical range due to fire suppression, and it is currently listed as ‘Endangered’ by the U.S. Fish and Wildlife Service.”

Although it has been recorded from seven coastal states, this species has a stronghold, if you can call it that, in South Carolina. Many populations are small and have plants that number into only the hundreds or fewer. Click Here for a wonderful and informative write-up by the U.S. Fish and Wildlife Service that tells you everything you want to know about this species, and more.

My sincerest thanks go out to my good friend, Dr. Richard Porcher (noted author and botanist, and also retired professor from the Citadel University in Charleston, SC) who agreed to join me on my trek and point out a couple of locations for this plant species. I visited one other site in the FMNF for these plants, but they were well past bloom.

Here is a shot of the not-so-impressive-but-still-very-interesting flowers: 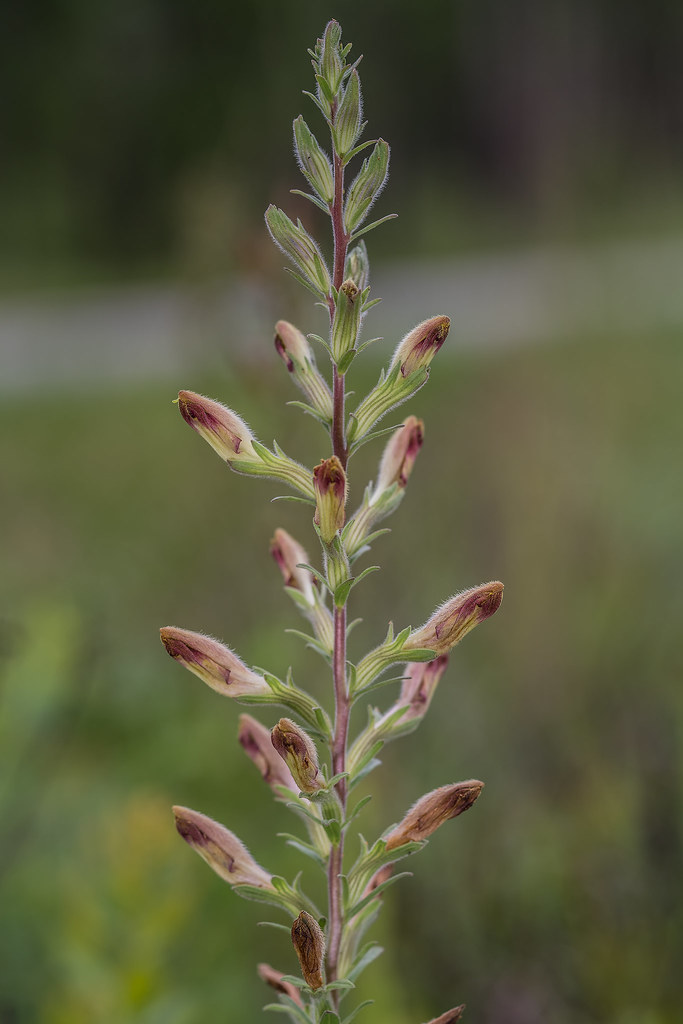 The following is a range map for Schwalbea americana, courtesy of the U.S. Fish and Wildlife Service. Note the large area in blue (extant populations) in South Carolina. It includes the Francis Marion National Forest, where I photographed the images in this blog post: 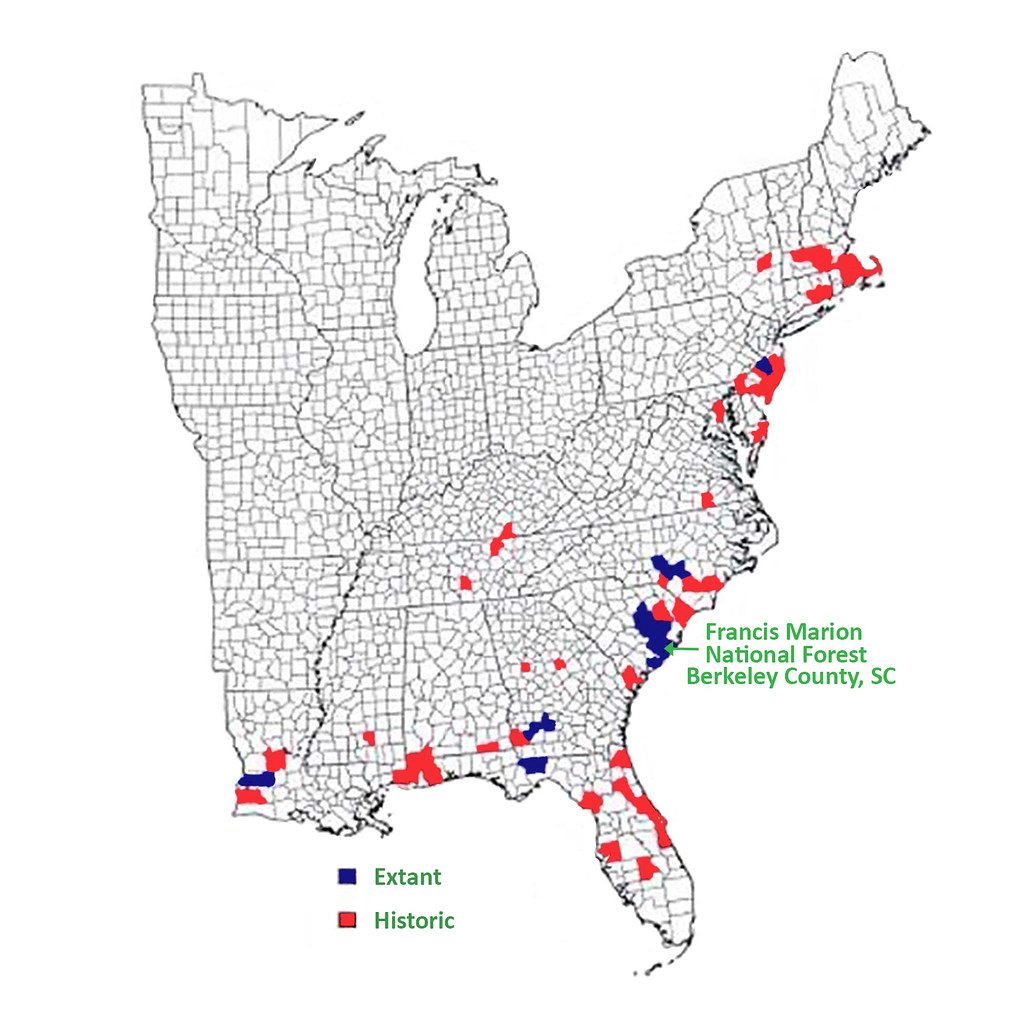 Just in case you didn’t notice, this is a really, really hairy flower! And, it is as open as it is ever going to be! 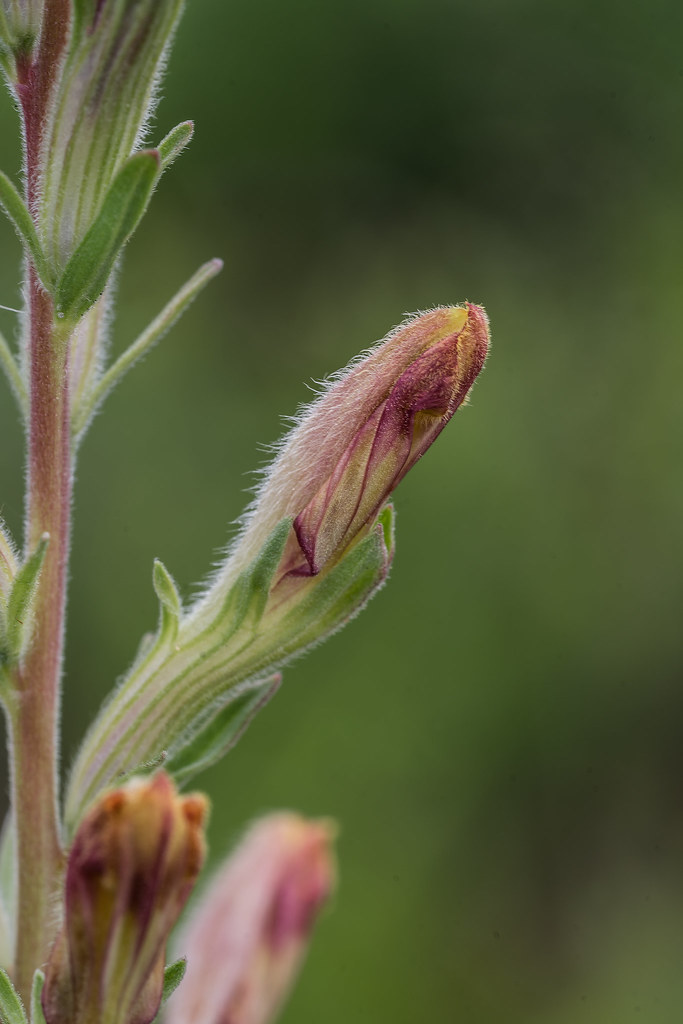 Although not the prettiest of our native flora, it does have a certain appeal. In fact, it even attracts local critters such as one of our many crab spider species: 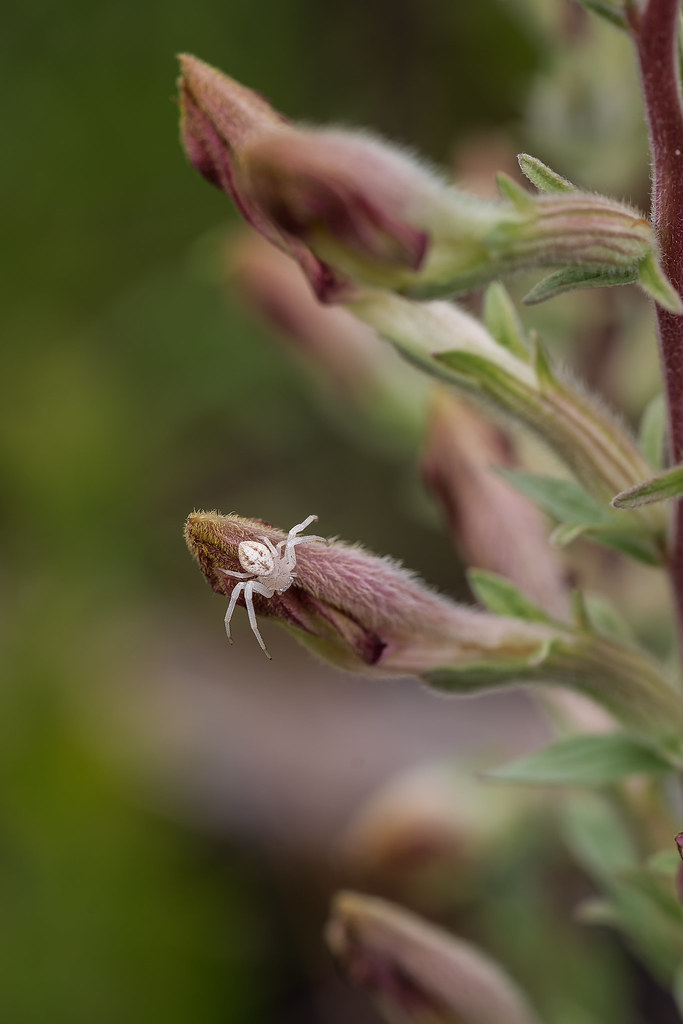 Here are some additional shots of the Schwalbea americana we found:

In the following shots, please note the tip of the pistil or stigma protruding from the flower (they never fully open). I observed only a few flowers, apparently only those at peak bloom, that showed this exposed stigma:

Some of you, Dear Readers, fuss at me for not including the entire plant in any of my shots. So, here is one showing the leaves and one showing a group of plants that are past peak bloom and are producing seed capsules:

If you read the write-up by the USFWS or were astute and noticed the background in one of the above images, you know that this plant species is very dependent on prescribed burns of the forest. The plants will sometimes show from year to year even if there is not a burn, but in order to thrive, the habitat must be burned on a periodic basis. That’s where the USFWS comes in. They conduct the burns in the Francis Marion NF and make sure that at least this part of the puzzle is put into place.

Although the species of host plants (remember that Schwalbea americana is a hemiparasite) vary widely, this Endangered species is not plentiful. It is fairly easy to grow from seed. In fact, the South Carolina Botanical Garden is in the midst of a project to grow and out-plant many of them back into the FMNF and other suitable habitats where sightings have been historically recorded. However, for whatever reason, the mortality rate is pretty high. Apparently, raising the seedling plants with a suitable host seems to work better than not. Much has been learned about the care of this species, but there is still much to learn.

There are a number of other Spring and early Summer wildflowers that can be found in the FMNF during the third week in May. And I have to admit that although I was down there for the intended purpose of finding and photographing Schwalbea americana, I just could not pass up searching for those other beauties. And, I really didn’t have to search very hard. I visited one depression area where there were dozens of Calopogon pallidus or Pale Grass-pink orchid in bloom. That area had recently been burned and the grasses and other sprouting vegetation made for a great background. One note: I’m beginning to believe that this orchid species is a bit more fire-dependent than I had originally expected. I see it scattered in suitable habitat from time to time, but after a prescribed burn like the recent one in the area, it seems to grow in profusion. I’m not complaining in the least, though, it’s difficult for me to pass up any sighting of these beauties, especially because they appears to have “angel wings”. And just like snowflakes, no two of them are exactly alike: 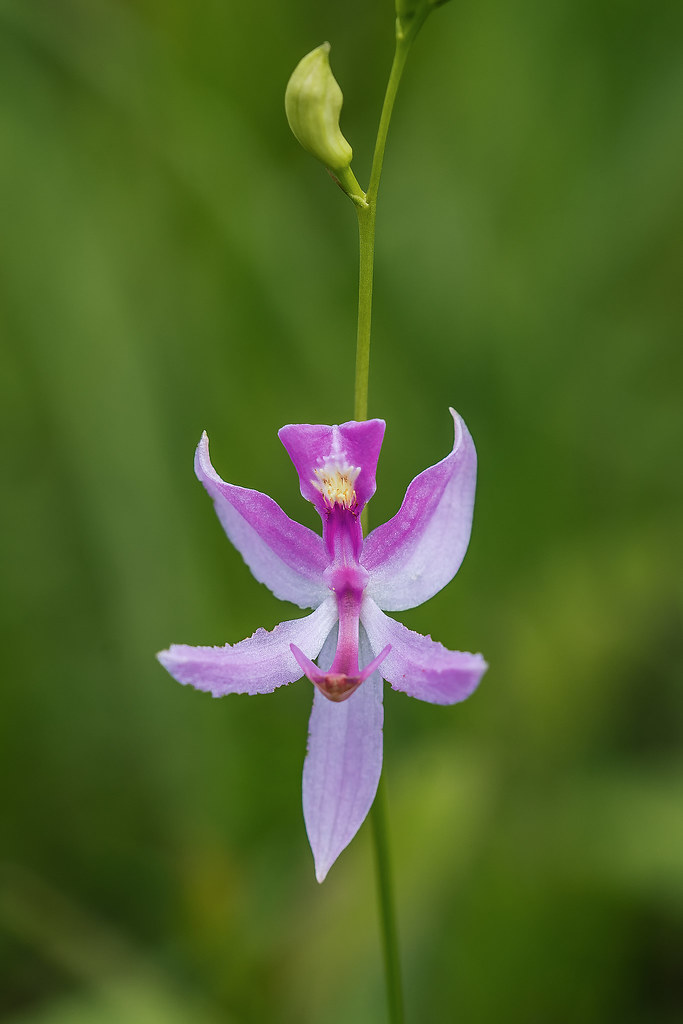 In that same wet depression, I found a few of their larger cousins, Calopogon tuberosus or Common Grass-pink orchids:

And in a nearby ditch, there was this nice grouping: 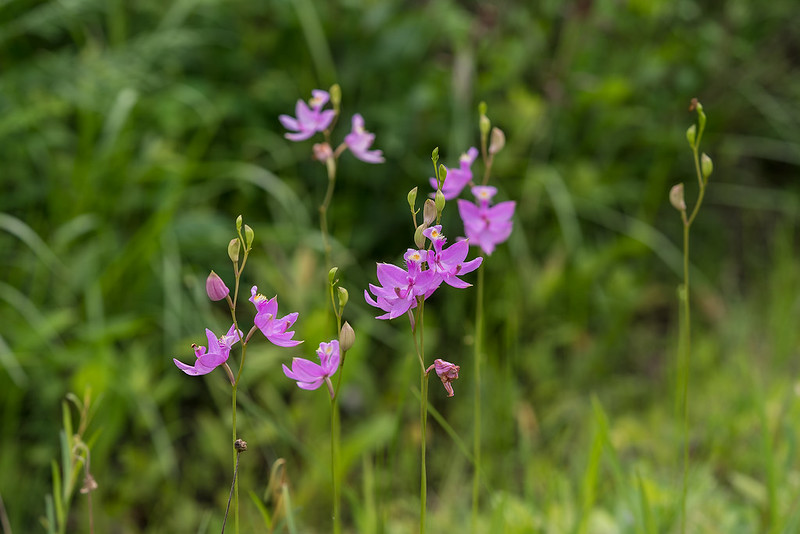 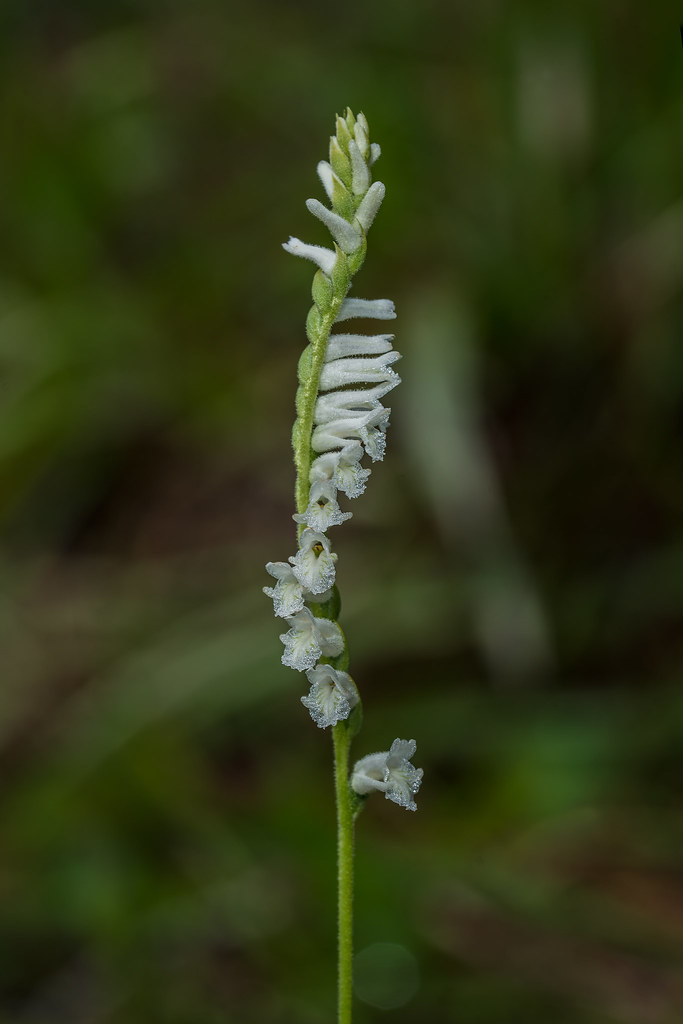 I did manage to spot one, lone Pogonia ophioglossoides or Rose Pogonia in the ditch. It’s also known as the Snakemouth orchid.: 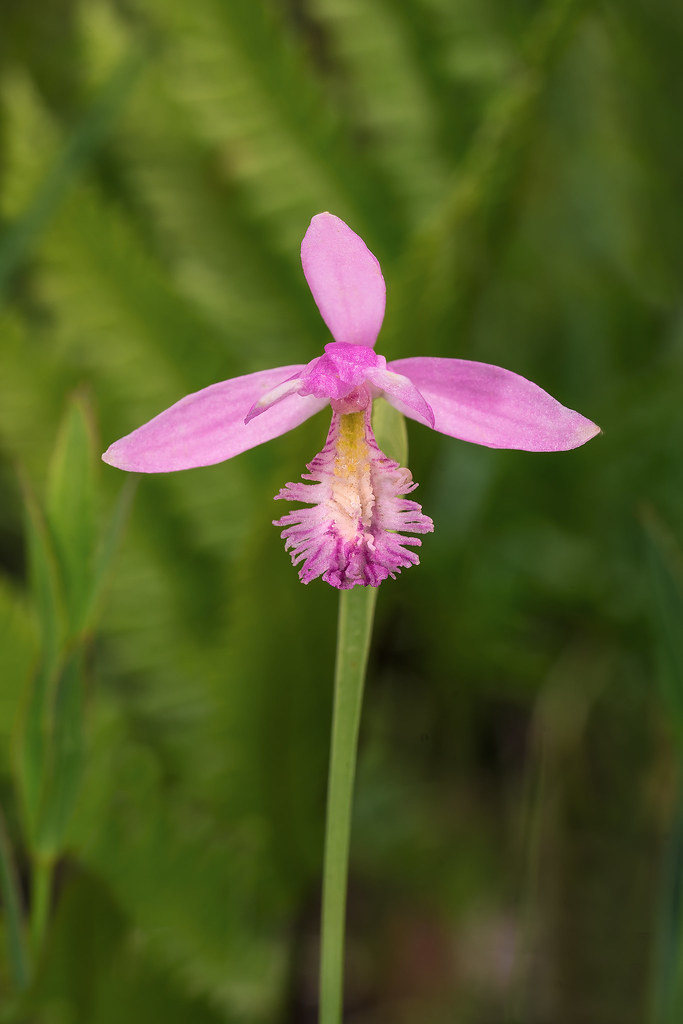 Also scattered along that Forest Service Road were many Spiranthes vernalis or Spring Ladies’-tresses orchids. Photographing these allows me to answer the age-old question of “Which way do they spiral?”:

As you can see, they spiral in either a clock-wise or a counter clock-wise direction. Not only that, but they can have all of their flowers in an almost straight line on one side of the stem. This is called “secund”:

Or, it can present the flowers in a very tight spiral: 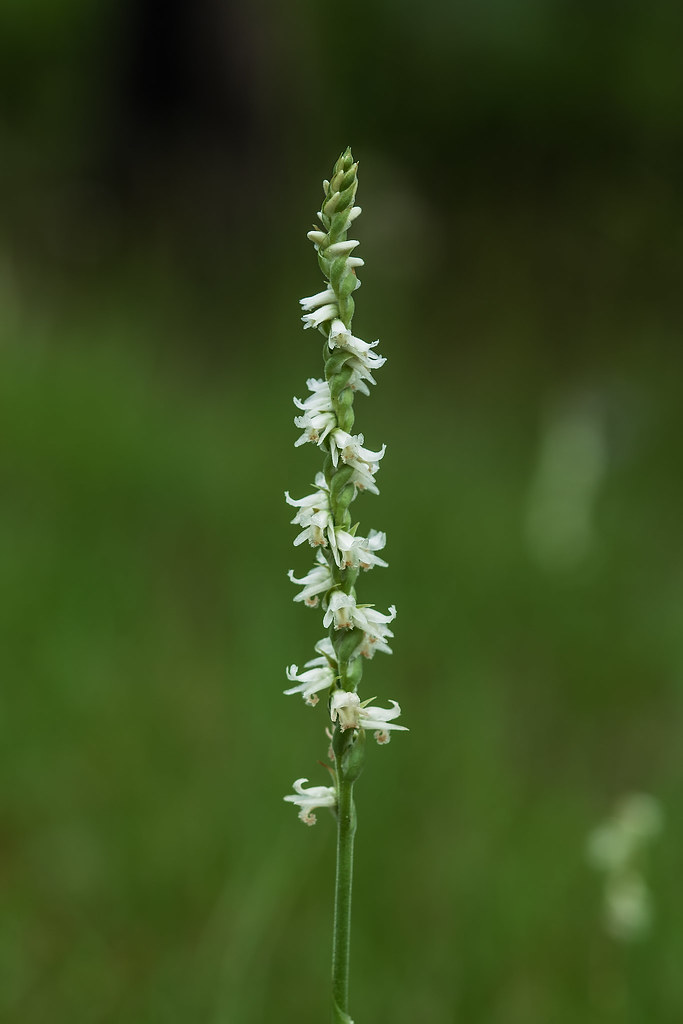 We had a wet Winter and an especially wet Spring, so the ditches were full of water. This makes a perfect habitat for one of the Southeast’s prettiest Iris species, Iris tridentata or Savannah Iris: 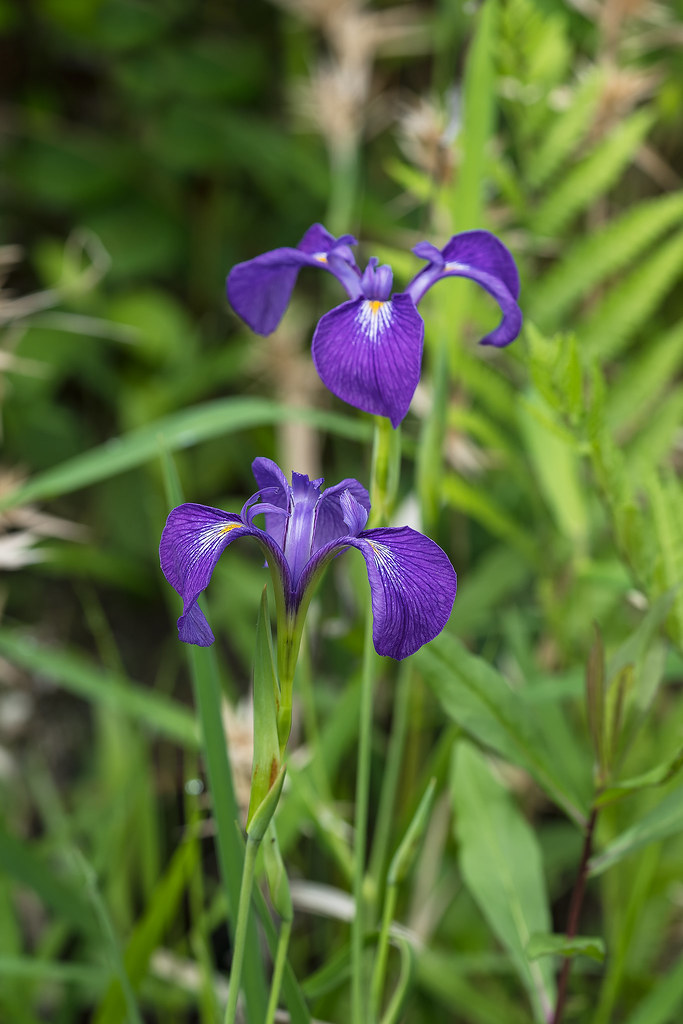 According to the USFWS, “Iris tridentata flowers are purple-blue. The sepals are widely spreading and then arching downward with prominent dark purple veins and a white to yellow signal. The petals are greatly reduced, not exceeding the base of the sepals. The inflorescence is one-flowered, the flowering stalk taller than the attending leaves. The leaves are blue-green, basal and upright, from extensively branched, wandering rhizomes, rooting at the nodes and forming loose colonies.”

Lining the upper portion of the ditch, were a dozen or more Asclepias longifolia or Longleaf Milkweed. This species has extremely long and narrow leaves from whence the name comes:

Not to be confused with Longleaf Milkweed is Asclepias lanceolata or Few-flowered Milkweed. I found only a few plants at this location, but the variation in orange, red, and yellow coloration is amazing. It is certainly a challenge to photograph with its thin, 4-5 foot (1.2-1.5 meter) stems which bend to and fro in even the slightest breeze:

In the drier parts of the freshly burned savannah, I spotted (it would be difficult to miss these) the tall spikes of Baptisia albescens or Spiked wild Indigo:

One plant which is ubiquitous this time of year is Polygala lutea or Orange Milkwort. It prefers to grow on the drier portions of ditch banks. The small, 1-inch (2.5-cm) flowers really light up the landscape and will continue to bloom well into the Summer: 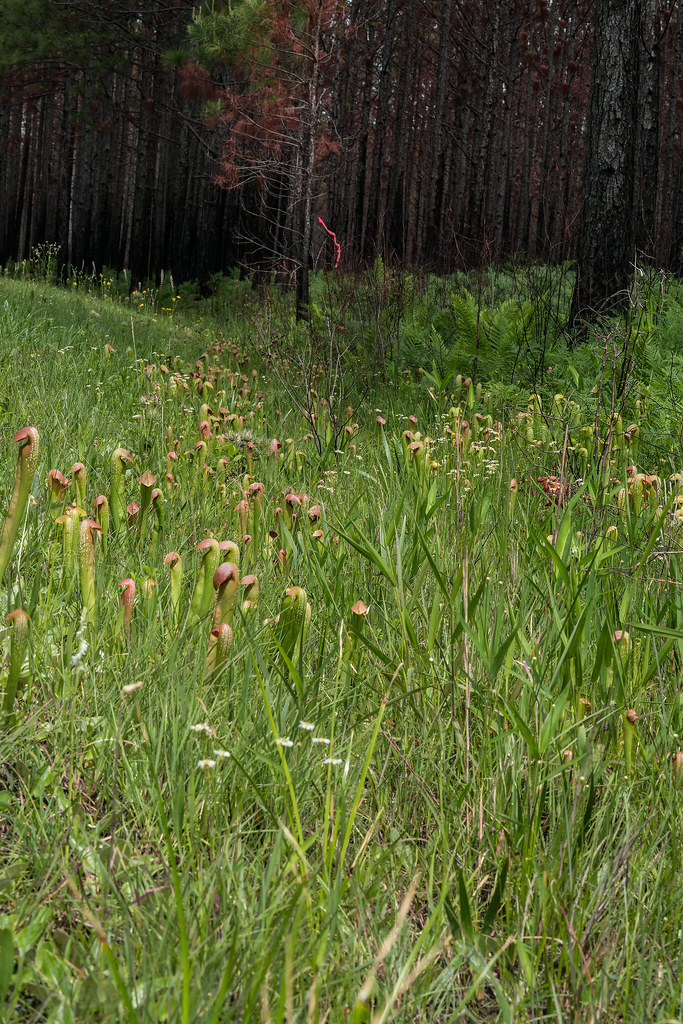 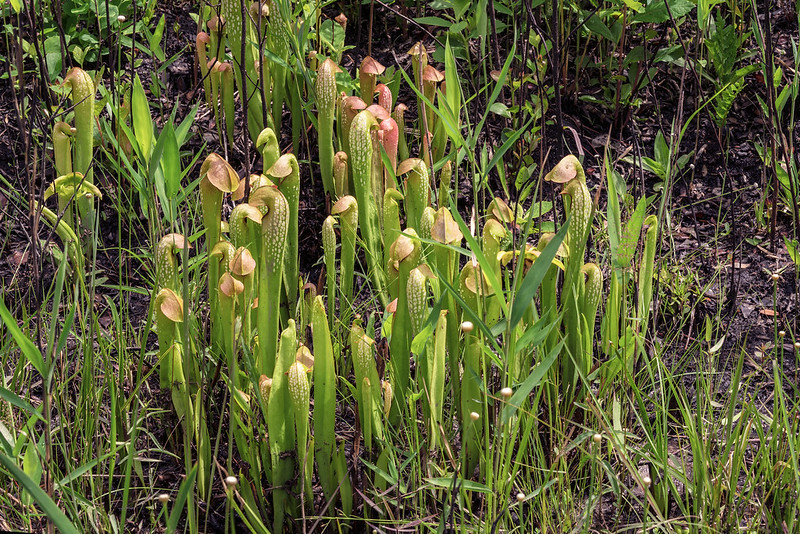 Another denizen of wet ditches is Rhynchospora (Dichromena) latifolia or Sand-swamp Whitetop Sedge. It is clonal and so plentiful, that in some instances, it can completely fill a ditch. I really admire the look of the extra-long, bright green bracts that surround the central cluster of white flowers:

It was time to wrap up the day — I had more than 4.5 hours to drive to get back home. On my way out of the forest, I wanted to check on a small population of Cleistesiopsis divaricata or Large Rosebud orchid. I discovered this population several years ago, and it has proven to be reliable, although some years provide only a few blooming plants. This year, I found 7 in flower and two in bud: 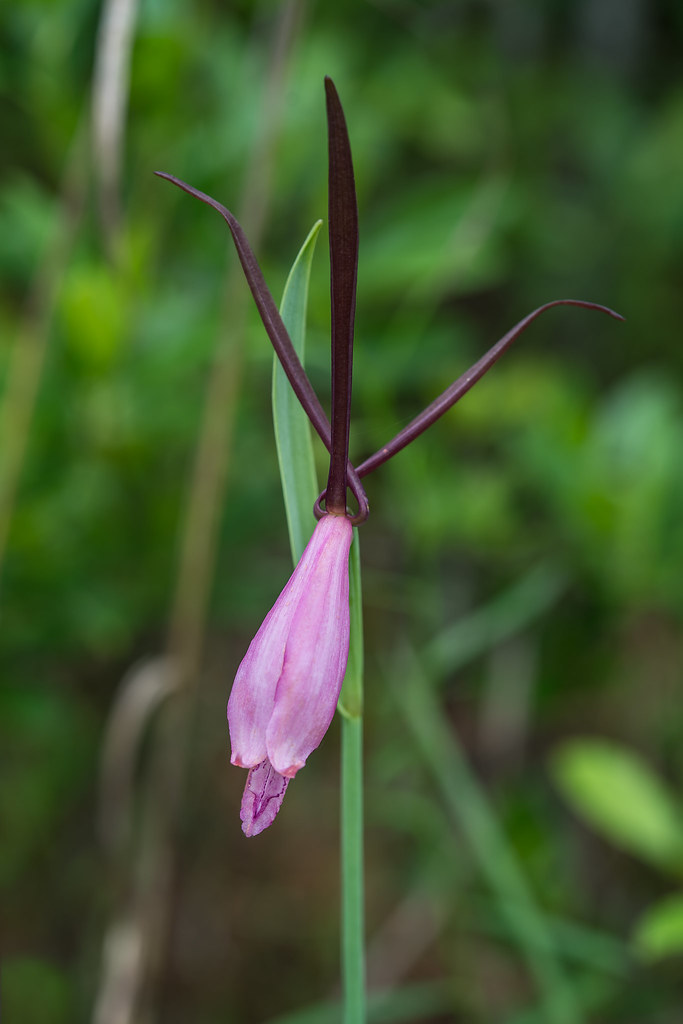 Now it really was time to head home. Heading north from within the forest, I saw colony after colony of the beautiful, Tephrosia virginiana or Goat’s Rue along the edge of the road. Much of it was past peak bloom, but I managed to find a few pretty nice specimens to photograph:

What a fun and fulfilling day I had! I failed to protect myself from chiggers, so I now have a couple of dozen itchy spots on my legs and around my waist band area, but hey, it was completely worth it. The third week of May is also a great time to visit other coastal areas such as the Green Swamp in southeastern North Carolina, but I just did not have enough time to spare an extra day. Again, I want to thank my buddy, Richard Porcher for meeting me down in the FMNF and showing me a few locations for Schwalbea americana. Without his help, I would have had to pick another title for this blog post!!! June is sort of spare around here for wildflowers, so it may be another month before you hear from me again. (I can almost hear the cheering now…) 😉