In case you missed it, Here is a link to Part 1 of 2 for this weekend trip.

After traveling north on the Blue Ridge Parkway on Saturday, on Sunday, Alan Cressler and I made the trip south from the intersection of Hwy. 221 and the BRP near Grandfather Mountain, North Carolina. Our target location was Mt. Mitchell State Park. The access road from the BRP to the top of the mountain is populated with scores of Platanthera psycodes or Small Purple Fringed orchids. Around the last week in June each year, I try to make the pilgrimage to this location because these orchids almost never let me down. They come in a variety of shades from pure white (still have not found this one) to pink to deep rosy-purple. Here is one showing the typical color found in the large majority of plants at this site: 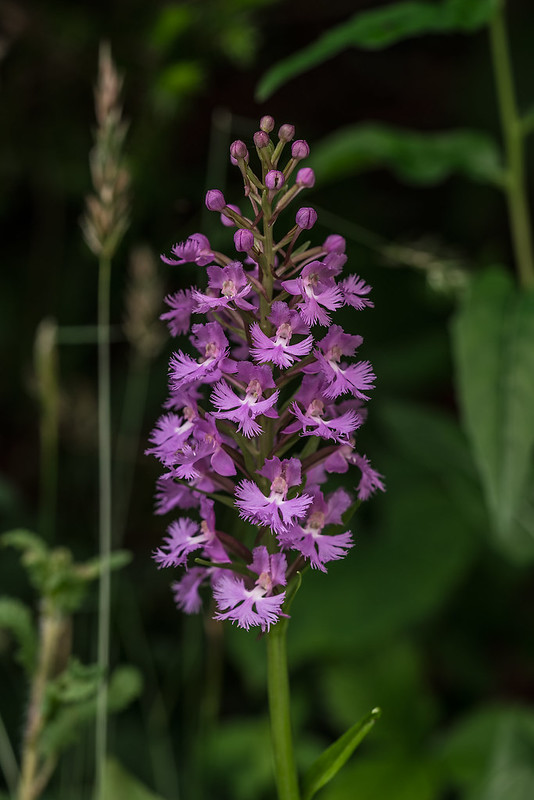 My favorite color form is the scarce pink form. On this trip, we saw just 3 or 4 of them out of the thousands flowering plants along the roadside. Here is an example of this one: 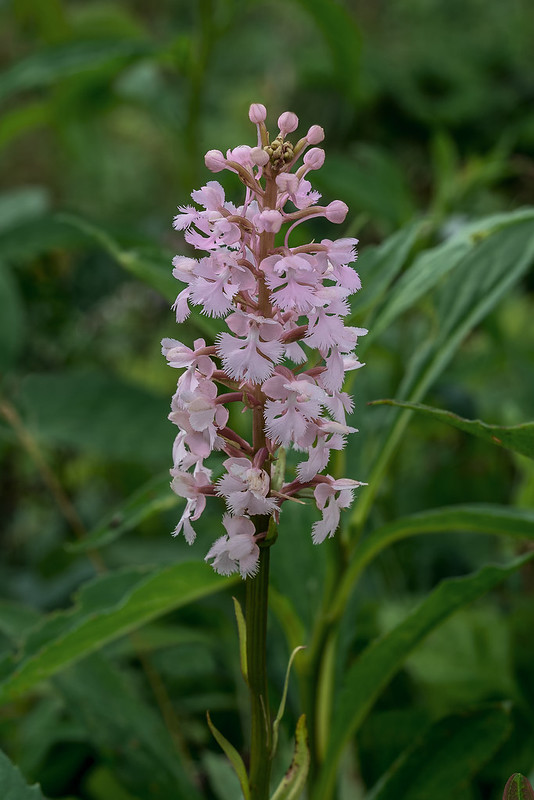 ‘Nuf said about that. Now, back to our scheduled programming…

I try to find instances where several plants grow in a group. This is not a “grouping” species. It does not clump. But sometimes, there are two or three plants that happen to be growing next to one another. Here are a few examples of such a grouping: 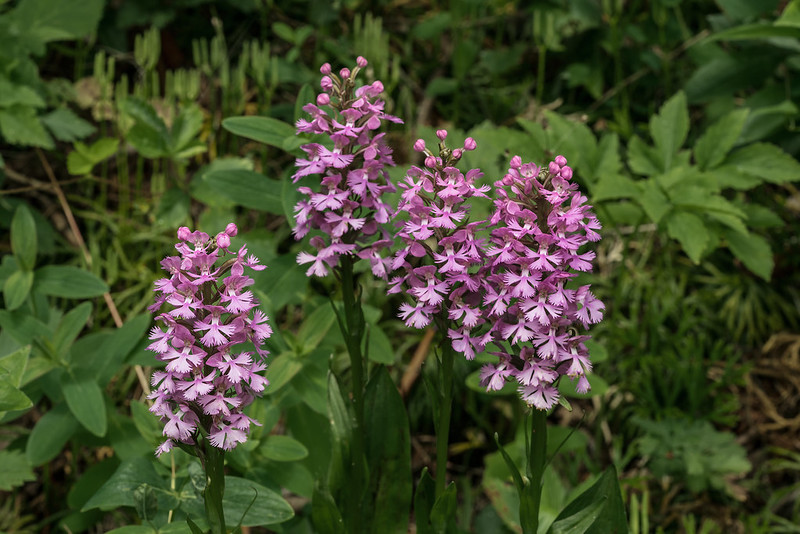 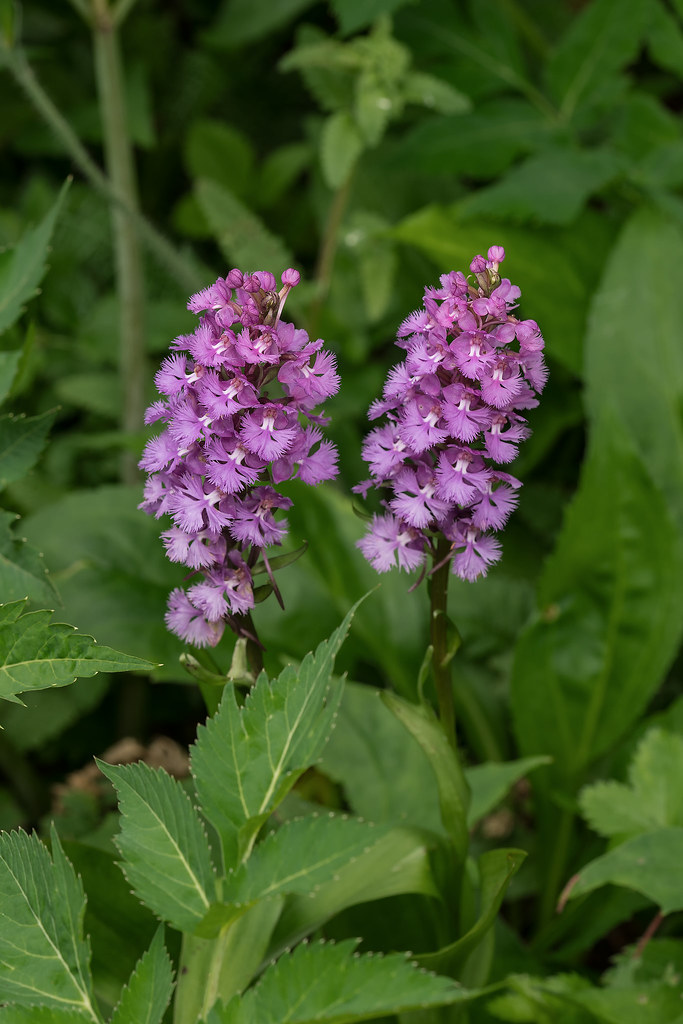 This year brought some larger specimens as well: 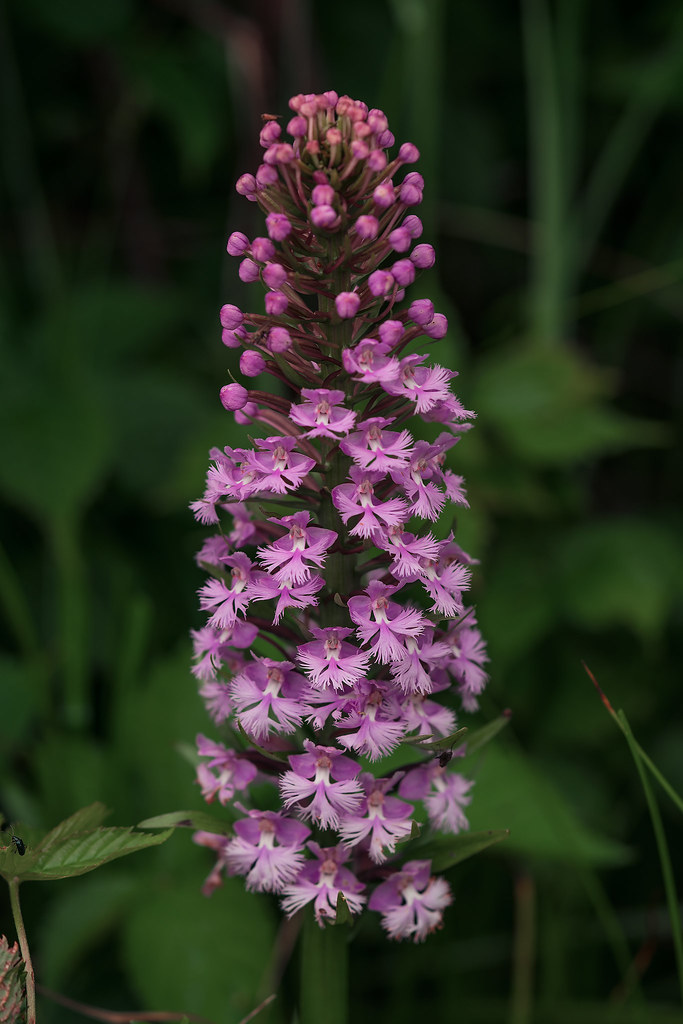 And, of course, a couple more of the lighter, pink ones:

Here’s a shot that captures a misplaced/displaced pollinium that was not totally removed from its anther sac. If you have been following my posts for any time at all, you know that this is the kind of thing I like to find. Sometimes, such as on this occasion, I didn’t know I had captured it until I downloaded the images from my camera: 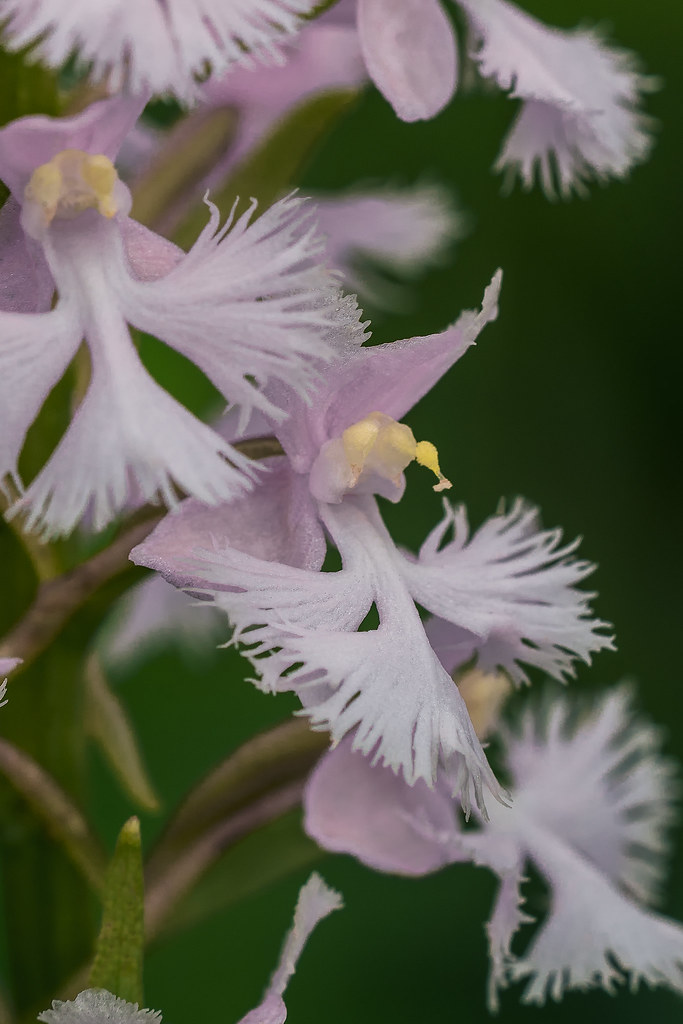 But, I have to say that the pièce de résistance of this trip was the scene of hundreds of rather large Small Purple Fringed orchid plants marching up the hillside. I won’t say anymore about this, because a picture is worth a thousand words (in this case, 3 pictures): 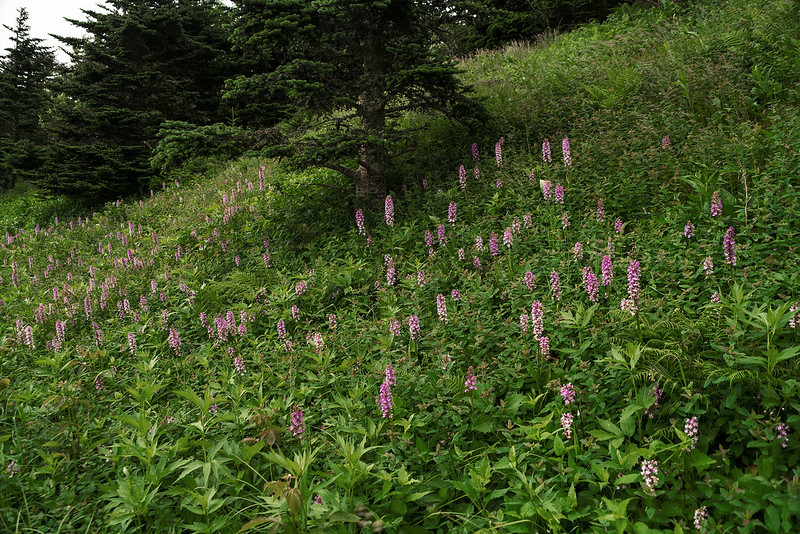 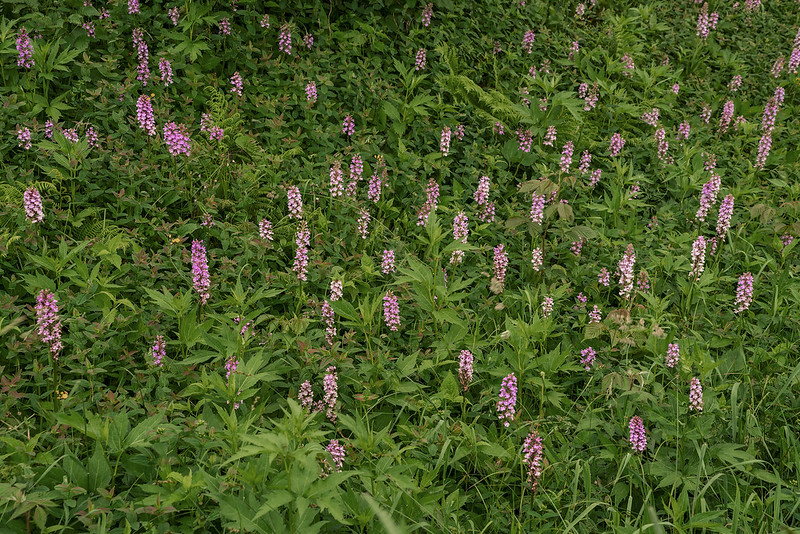 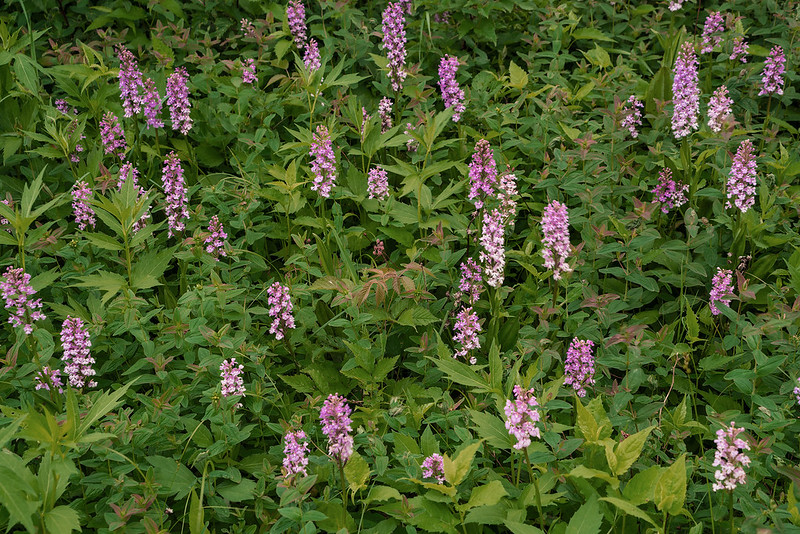 After taking a breather from this marvelous display, we decided to have our lunch in the Mt. Mitchell park restaurant. This time of year, it’s always crowded, but we had our meal in relatively short order and proceeded to head toward the top of the mountain where we hoped to find a secretive little wildflower called Oxalis montana or Mountain Woodsorrel. On Mt. Mitchell, which is the highest point east of the Rocky Mountains at 6,684 feet (2,037 meters) above sea level, this wildflower prefers to hide in the spruce-fir trees beside the trail to the observation tower. Here is an excellently written story about these trees on Mt. Mitchell.

When we finally found the small patch of plants, the flowers were not fully open, so Alan went on up to the summit to capture some cloud scenes while I patiently waited for some sun to peak out to help open the flowers. The wait was worth it: 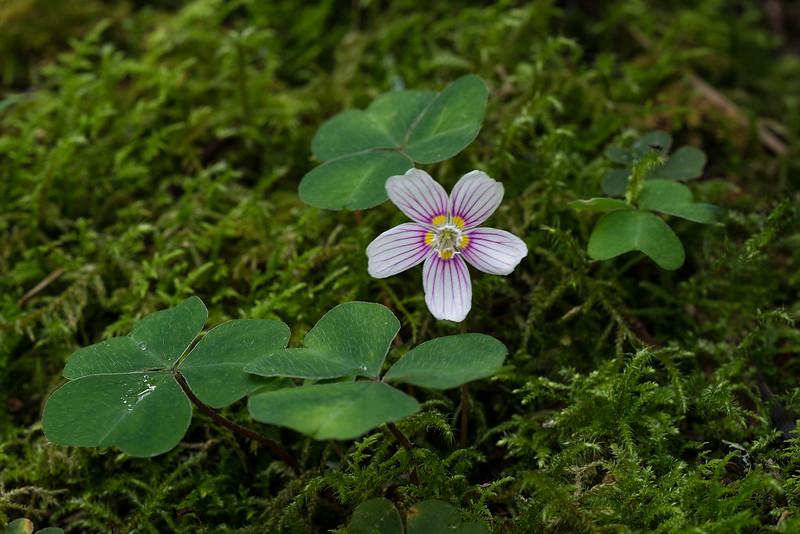 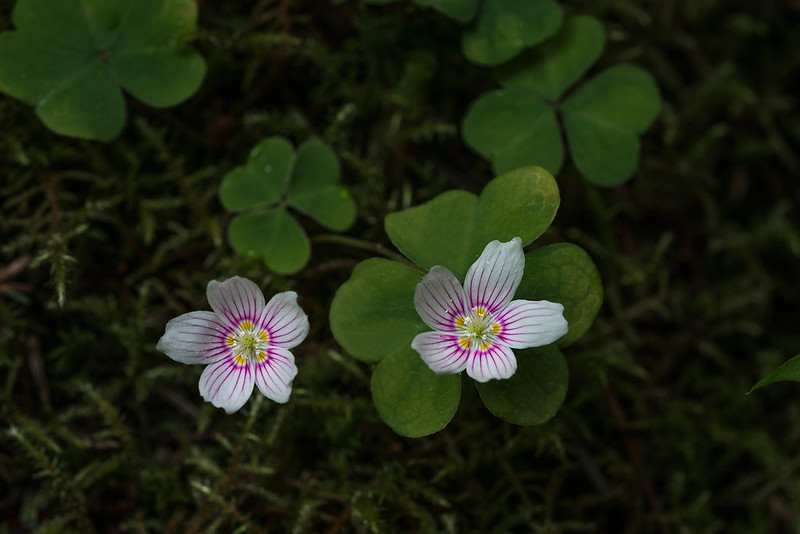 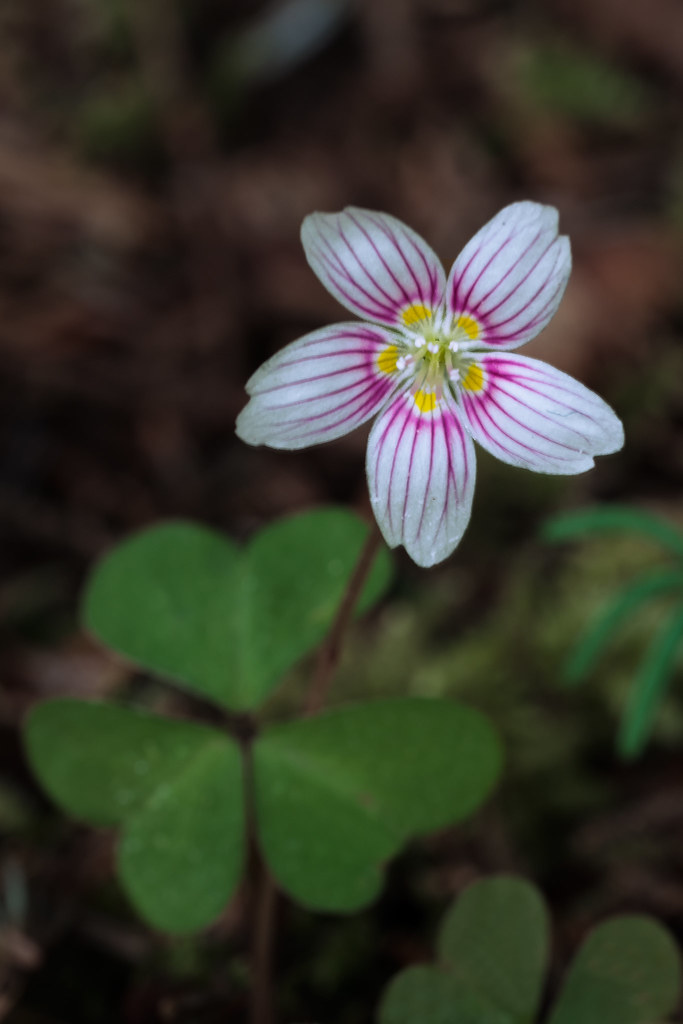 Compared to our other native Oxalis species, this one is a knockout! Its red stripes remind me of another spring-blooming high mountain plant — Trillium undulatum or Painted Trillium (see below). This Oxalis species is found only in the Appalachian Mountain chain from northern Georgia through Maine and into Canada. It seems to like the cooler temperatures of higher elevations. 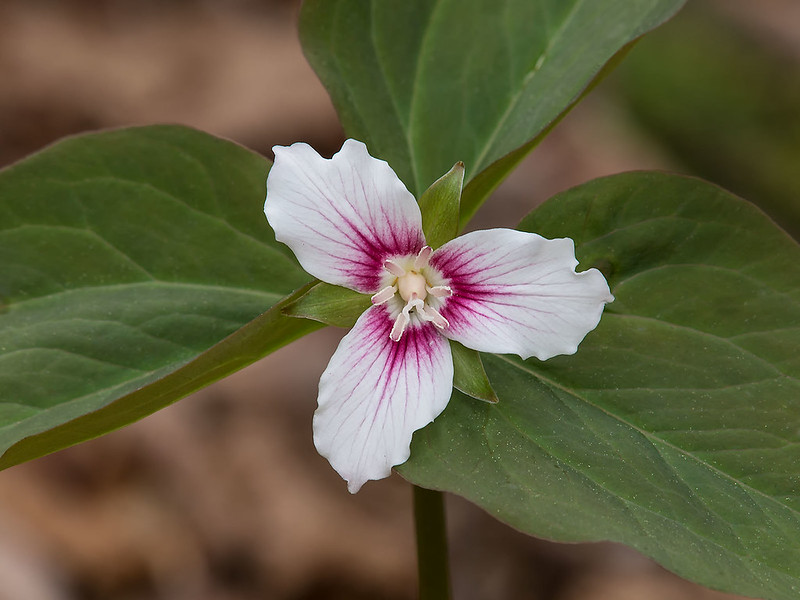 Well, it was now time to head south again. This time, in search of the elusive Platanthera grandiflora or Large Purple Fringed orchid. I know of only three sites for this regionally scarce orchid species along the Parkway, and none of the sites produce more than a handful of flowering plants in any particular year. The first site we visited showed us nothing. I was feeling a bit apprehensive as we approached the second site. But I should not have, because there were about 10 plants in full bloom. Platanthera grandiflora comes into bloom at least a week before Platanthera psycodes, so the plants we saw at this second site were well into bloom. In fact, if we had been there a few days later, they would not have been nearly as nice to photograph. Here are the results of our visit: 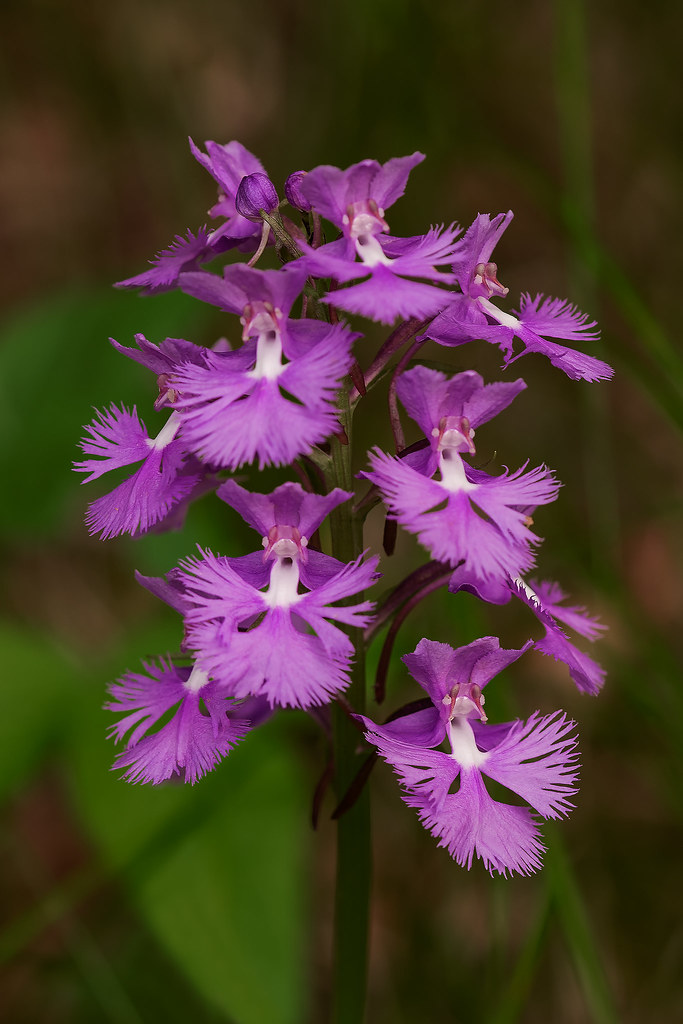 Feeling quite satisfied at finding such nice plants to photograph, we agreed that this would be our last stop for the trip. Alan would be heading back to his home in Atlanta, and he had quite a distance to travel. So, we chatted a bit about the adventure and then said our goodbyes. I headed back north on the Parkway toward the cabin and toward a patch of Penstemon smallii or Small’s Beardtongue I had seen on a rocky outcrop on our trip down to Mt. Mitchell. The color of these flowers and the number of flowers in the patch made it hard to miss. The problem was that where these plants like to grow precludes pulling off the Parkway anywhere near them. So, I had to drive another couple of hundred yards/meters to find a suitable place to pull over. When I walked back to the spot where the plants were growing, I found that I had an additional problem: no space between the rocky outcrop and the road. In addition, the road curved around the outcrop, so I was in a rather blind spot with my butt stuck out into the road. Fortunately, the speed limit on the Parkway is only 45 mph (72 kph), and it being a curve, even slower. But still, when a large pickup truck came around the curve, it was more than a bit unnerving! But, I managed to get off a few shots of this gorgeous wildflower: 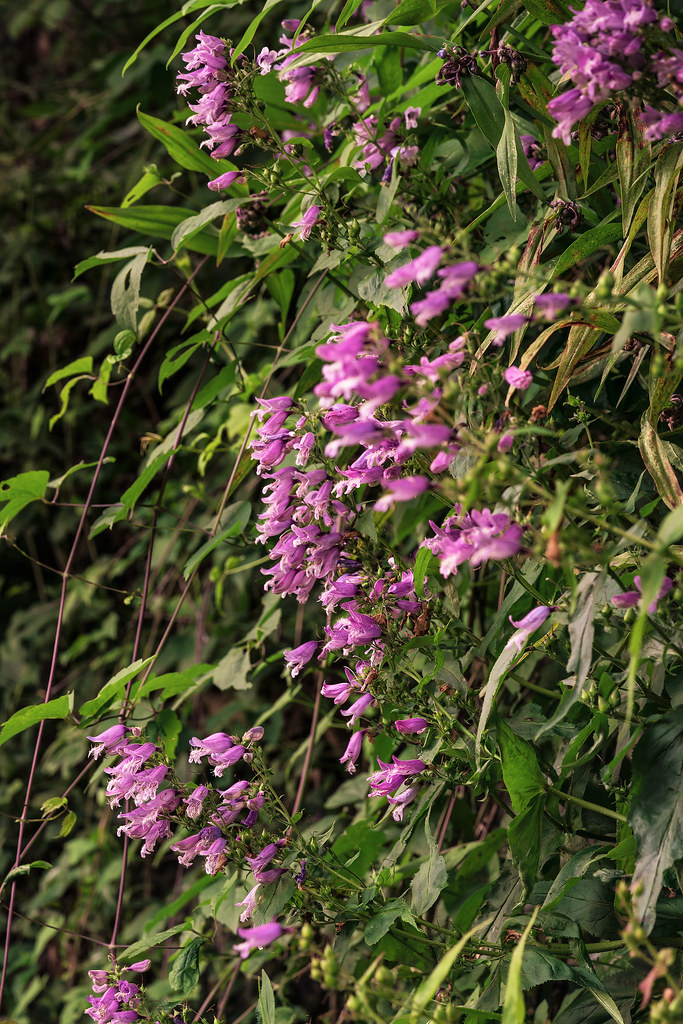 I finished up and got back to the truck safely. Whew! That was close. I pulled back onto the Parkway, remembering what a great time we had had out in the field. The plants we had come to see (well, all but one) had performed in spectacular fashion. Even the ones that were a surprise to us, gave me chills as I reflected on our visit. Alan is really a good friend, and we have a lot in common when it comes to photographing our native wildflowers. I treasure his friendship and look forward to many more adventures with him in the Carolinas and Georgia.

My next trip is planned for a visit to Texas in a few weeks. A great nature photographer and Flickr friend, Matt Buckingham, will be guiding Walter Ezell and me on a trip that will take us from Dallas, Texas to the Davis Mountains in west Texas. We hope to locate and photograph several of the Hexalectris (Coralroot) orchids as well as other spectacular wildflowers that Texas is famous for. Wish us luck!