Fall, having thrust itself on us in the Southeast, I thought it would be fun and maybe a bit instructive to write a blog post about the southeastern Gentians. According to Jim Drake in his illuminating, self-published book, Gentians of the Eastern United States, the plant family Gentianaceae contains 87 genera and more than 1600 species worldwide. But I will restrict myself to three genera, Gentiana, Gentianopsis, and Gentianella, each well represented in the southeast. Incidentally, they all bloom during the fall, September through November. I had actually planned to make a short field trip to the upper reaches of Greenville County, South Carolina to photograph a population of Gentiana saponaria or Soapwort Gentian aka Harvest Bells which I’ve been following the past couple of weeks from bud to bloom, but it is pouring rain as we speak. Maybe tomorrow… This is what they looked like in full bloom a couple of years ago: 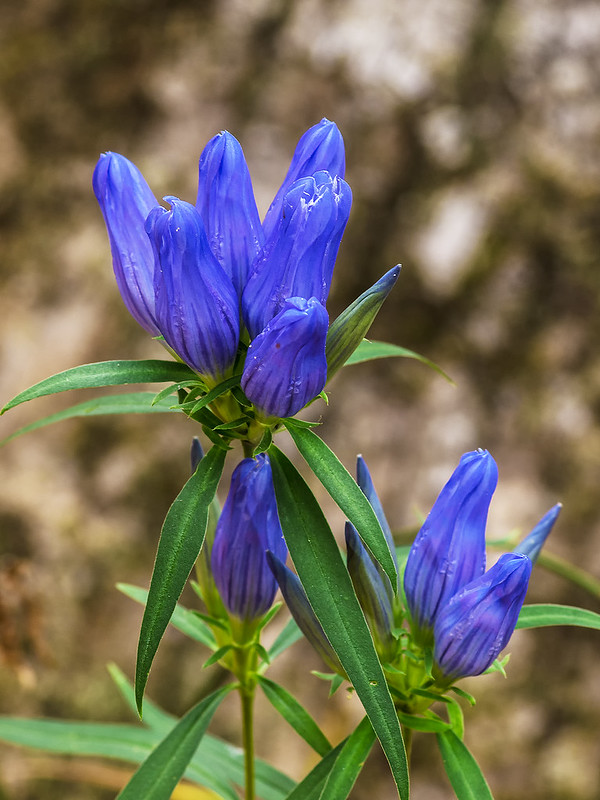 This particular species is found in eastern North America, along the Gulf Coast and into Texas. It comes in several flavors as you can see in the following image: 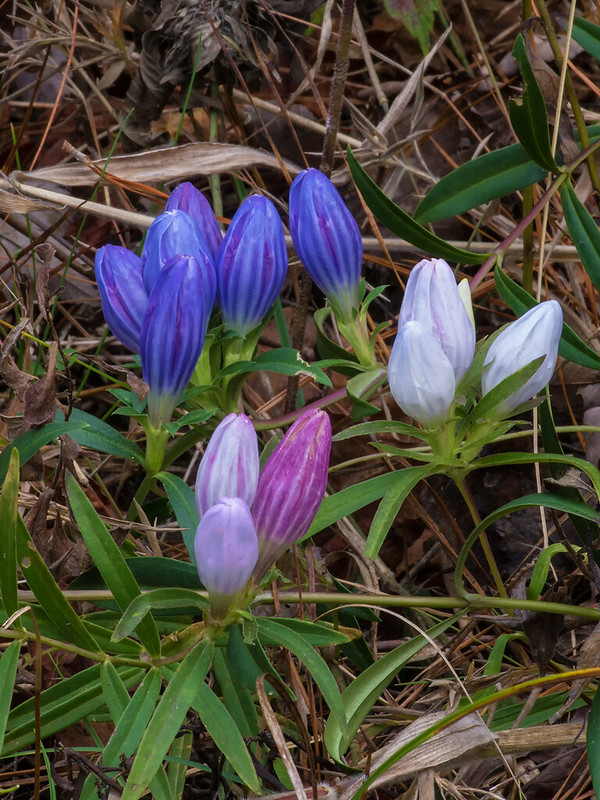 I think these flowers are vaguely patriotic in their red, white, and blue hues. This one was photographed beside a dusty, two-track road in Floyd County, Georgia. Although, for the most part, the flowers remain closed, there are occasions when I’ve seen plants with open flowers, but these observations are rare, in my experience: 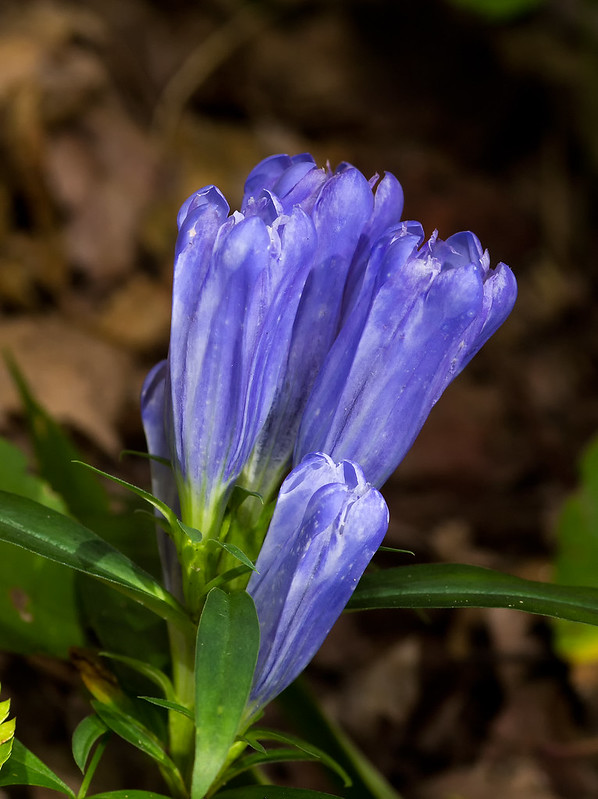 It can also be found in a striped form as in the image below: 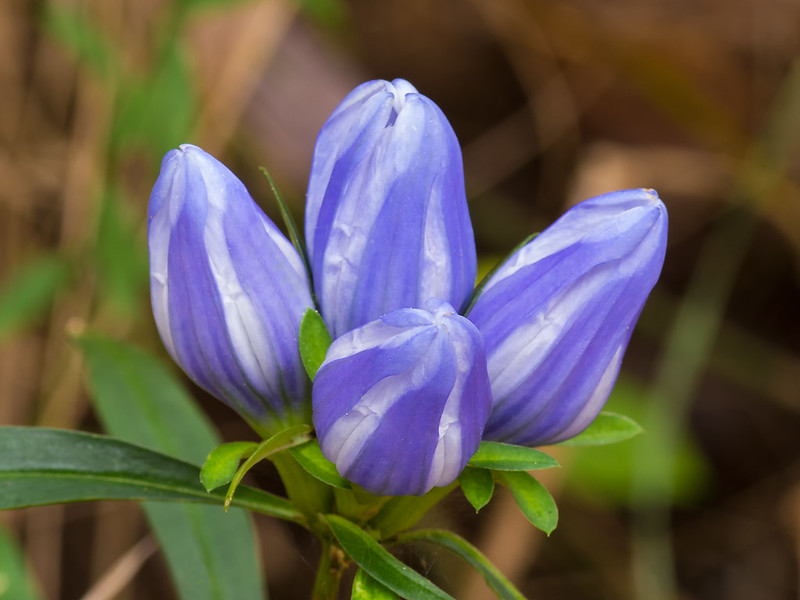 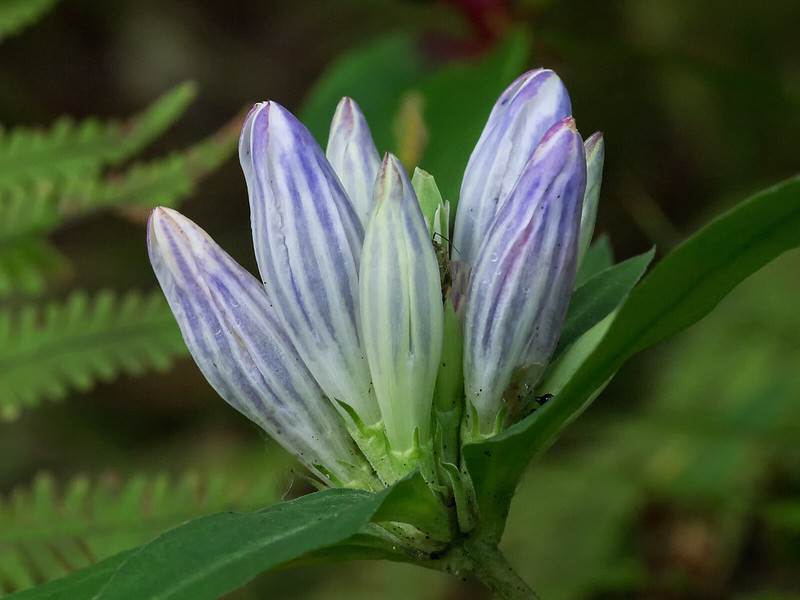 This is another species I’ve seen with open flowers: 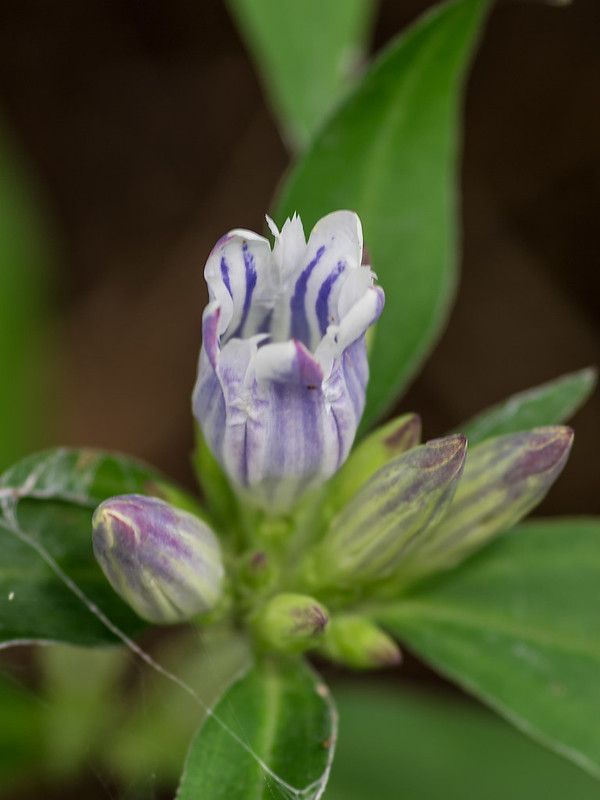 Then there are these bad boys for which I’m still not confident I know the identification. They have characteristics of both Soapwort Gentian as well as Showy Gentian. I have to believe that those two species are capable of crossing, so maybe this is the result. Who knows? I surely do not! In any case, here are some examples of these weird Gentians: 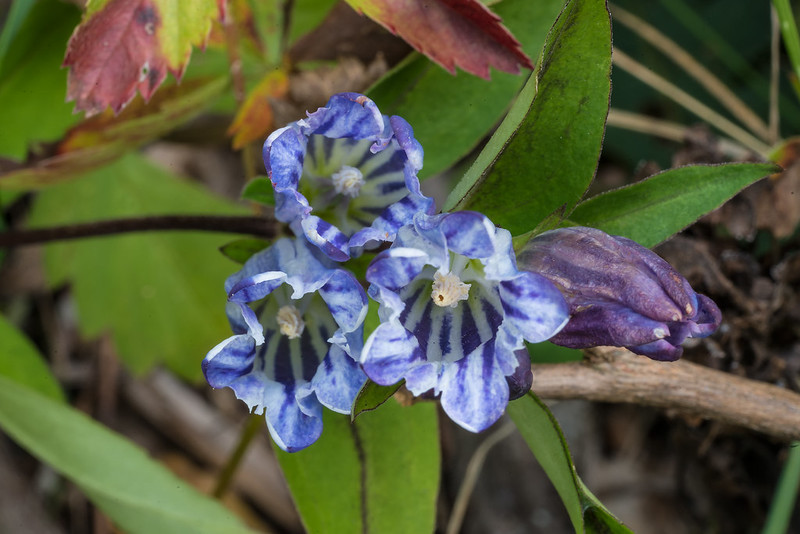 A very deep purple/blue species, quite rare and relatively recently named, is Gentiana latidens or Balsam Mountain Gentian. It is found scattered only in several high-mountain counties of North Carolina, and it can be seen in spots along the Blue Ridge Parkway: 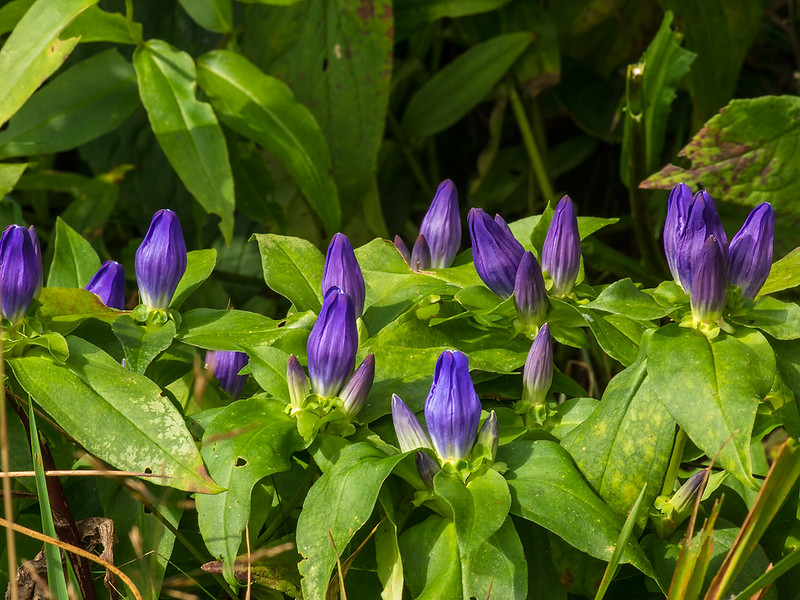 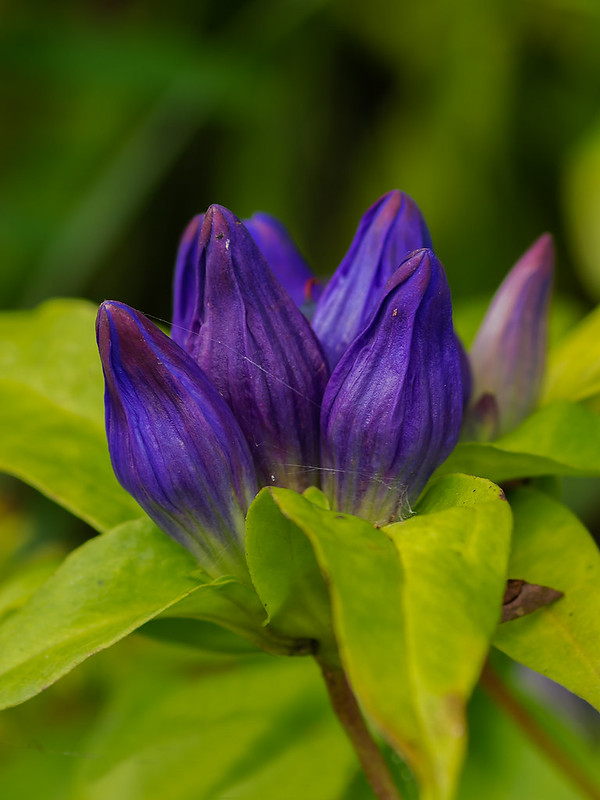 I’ve not witnessed open flowers on this species, which makes challenging work for its pollinator, usually a Bombus or Bumblebee species as seen on the faded flowers in this short video:

Another high-elevation Gentian species is Gentiana austromontana or Southern Mountain Gentian aka Appalachian Gentian. It can be found in North Carolina, Virginia, West Virginia, and Tennessee. I had photographed this species for a few years in North Carolina before I was able to attach a name to it: 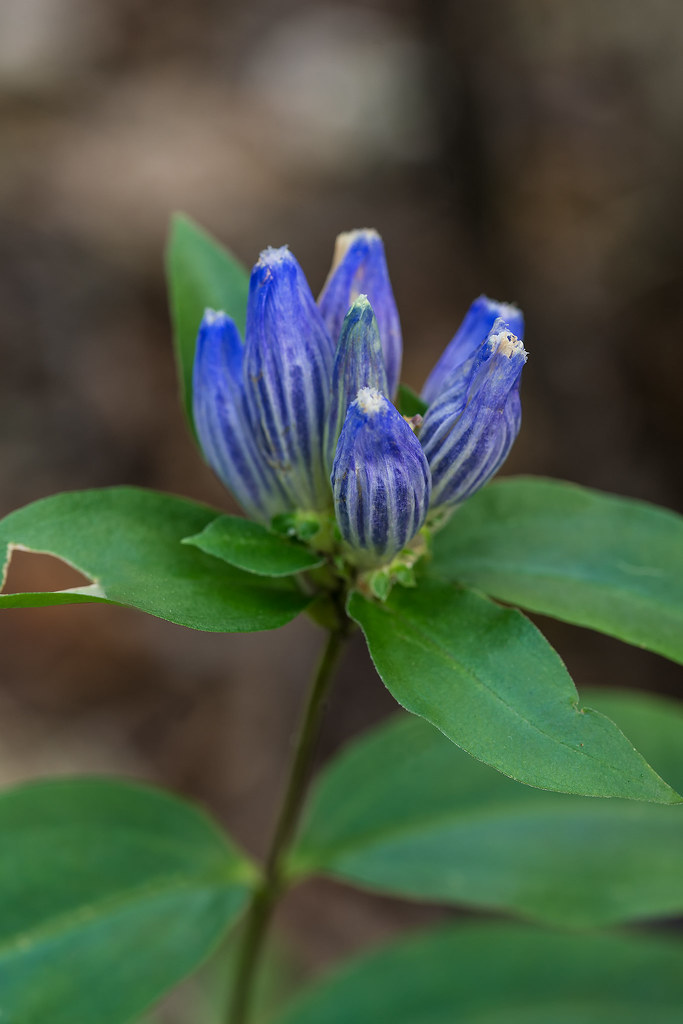 Here it is being targeted by another Bombus species: 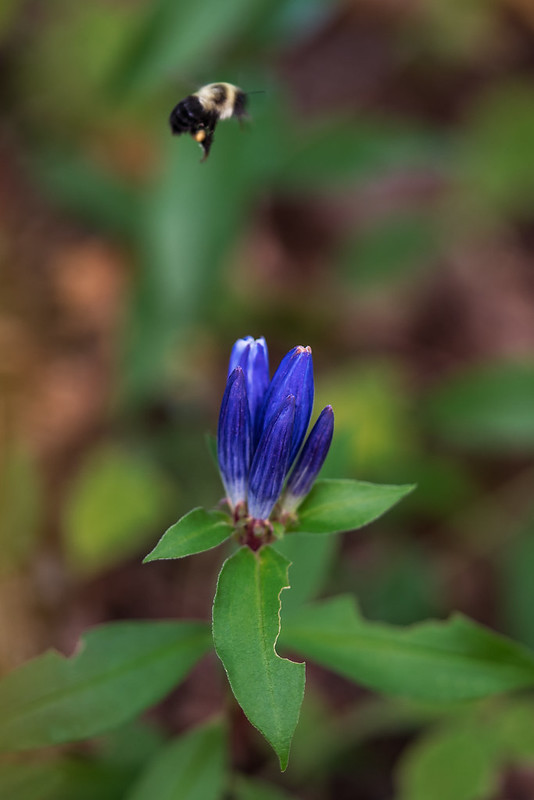 Now, let us look at the Coastal Plains Gentians. There is a Gentian species found on the Coastal Plain that closely resembles the previously mentioned Soapwort Gentian. It is Gentiana catesbaei or Elliot’s Gentian aka Catesby’s Gentian. It is found along the eastern coast from Pennsylvania to Florida. This species, like Gentiana saponaria, shows itself in a variety of color forms: 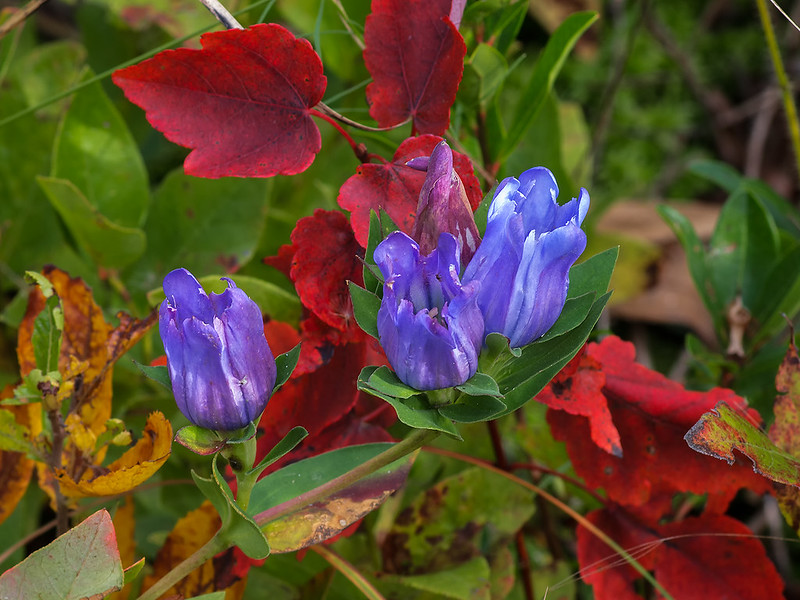 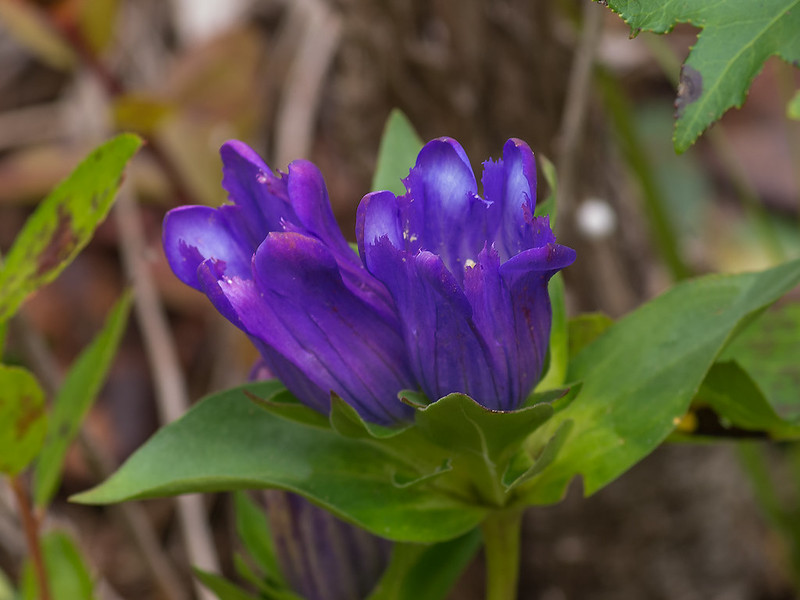 On bright, sunny days, most of the flowers open, allowing smaller insects like the Hover Fly, below, to enter and not have to fight its way into the flower for nectar: 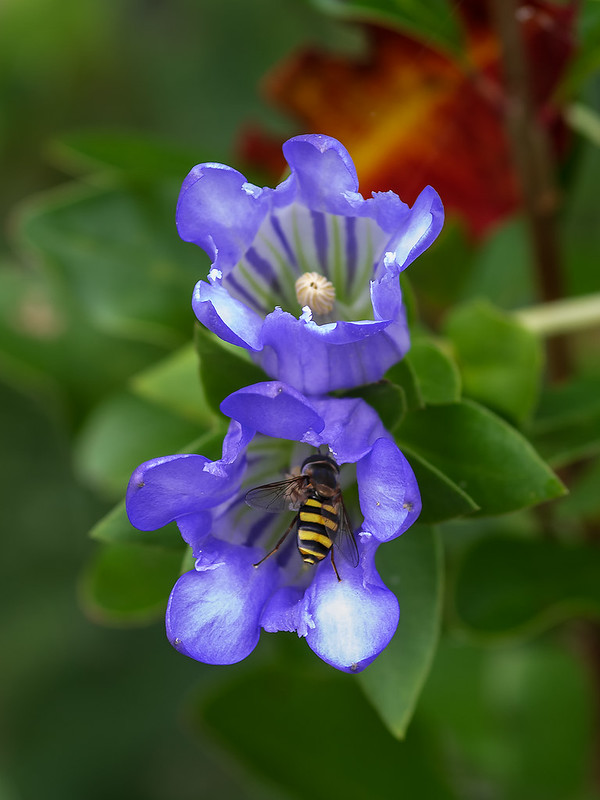 On cloudy days, the flowers tend to remain closed, but are no match for the strong Bombus or Bumblebee species as seen in the video below:

There is another remarkable Gentian species found along the Coastal Plain from New Jersey down through Georgia. It is Gentiana autumnalis or Pine Barren Gentian. Its electric blue color is striking to see in the wild, usually eliciting gasps among first-time viewers: 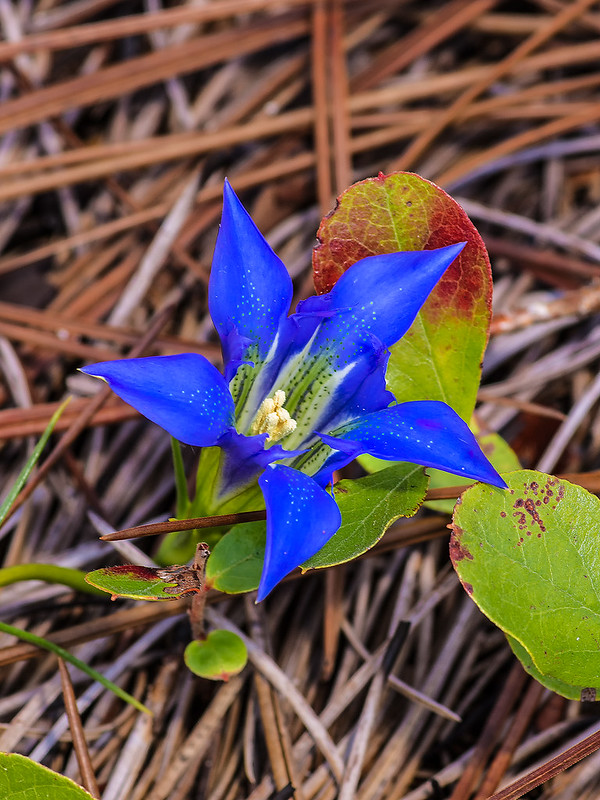 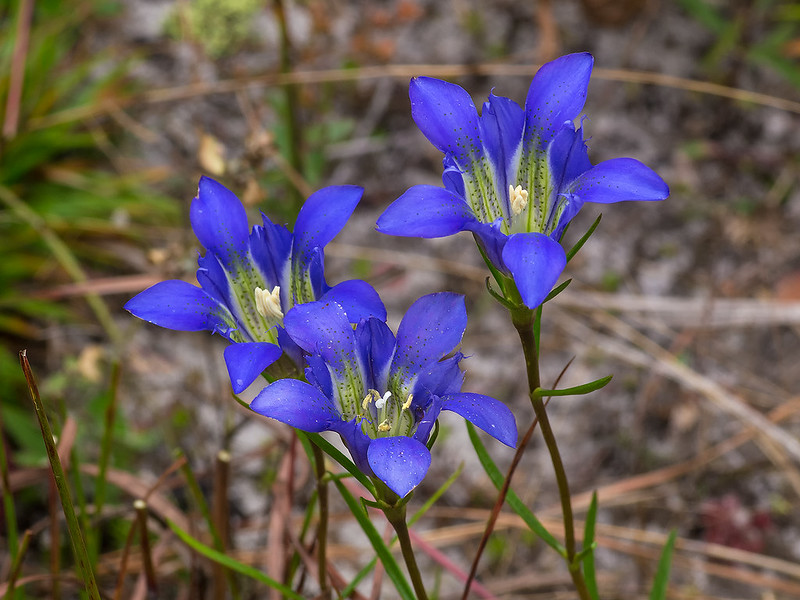 It is also a favorite of the Hover Fly: 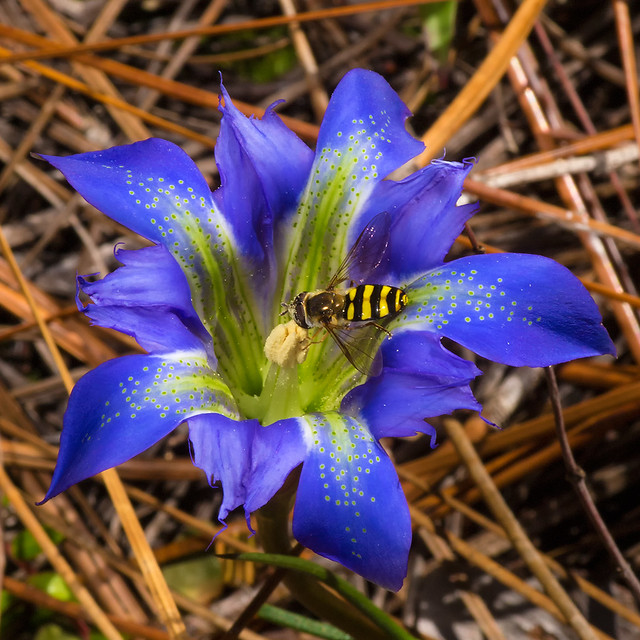 Although the large percentage of flowers have 5 petals, it is not uncommon to find those with either 6 petals or 4 petals:

I can not leave this genus without mentioning one of the color forms that just takes my breath away. My good friend and noted photographer, Chris Davidson who lives in New Jersey, has photographed a pink form of this species that is indescribable. The best way tell you about it is to show you a couple of his images:

Nothing else need be said…

The next Gentian is also in the genus, Gentiana, and I was fortunate to photograph it in the Panhandle of Florida a couple of years ago. It is Gentiana pennellina or Wiregrass Gentian. It very much looks like the Pine Barren Gentian, but it is bright white instead of electric blue. As far as I know, it is found exclusively in a handful of counties in the Panhandle of florida. Here are some examples: 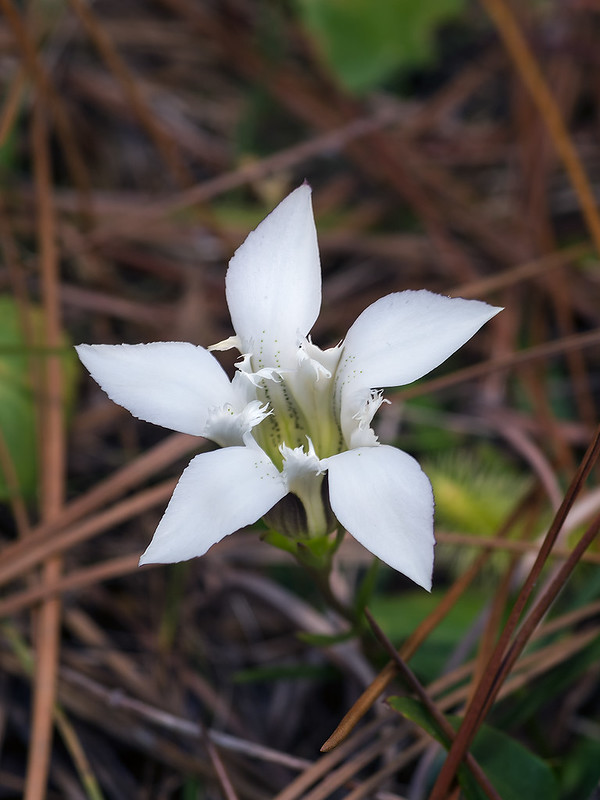 The next genus I will cover is Gentianopsis. The sole species found in the Southeast, and that, only sparingly, is Gentianopsis crinita or Greater Fringed Gentian. It is much more frequent in the northern states and in Canada, but it manages to creep into northern Georgia at its southernmost range. This is a species I never miss an opportunity to photograph, because of its color and beauty. Here are some examples: 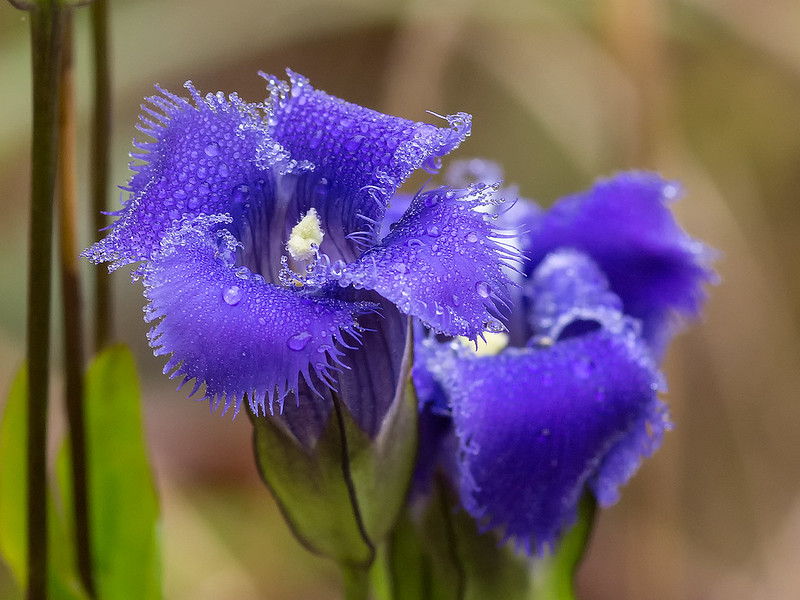 If you can arrive at the site earlier enough, you might be greeted with the flower buds covered with dew. Like many of the Gentian species, the flowers do not open fully until there is bright sunshine. 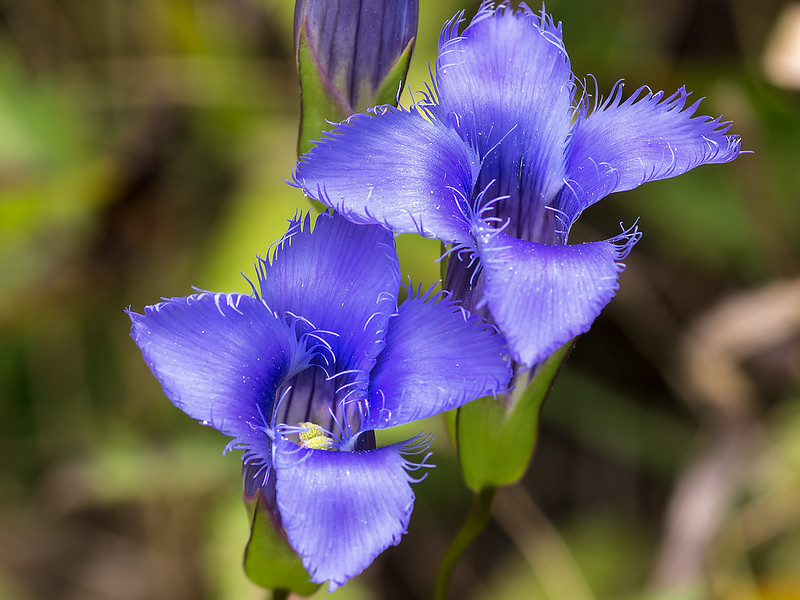 The “silky” sheen on the flower petals in full sunlight is quite unlike anything else I’ve ever seen:

The final southeastern Gentian genus I will mention is Gentianella or Dwarf Gentian. There are about 256 species in this genus scattered all over the world, but the one we have in the Southeast is Gentianella quinquefolia subspecies quinquefolia or Stiff Gentian aka Augeweed. It is a remarkable plant with hundreds of closed flowers ranging from white to deep purple. Although I’ve seen photos of the white form, I’ve never managed to find one to photograph. The flowers are generally tightly closed, but I have seen a few plants with open flowers. In the Carolinas, they can be found in the high mountains, more specifically, along the roadside of the Blue Ridge Parkway at around 5,000 feet (1,525 meters) in elevation.

Here is a selection of images (all photographed along the Blue Ridge Parkway in western North Carolina) showing the wide variation of color forms exhibited by this species:

Plants with many clusters of flowers are not uncommon: 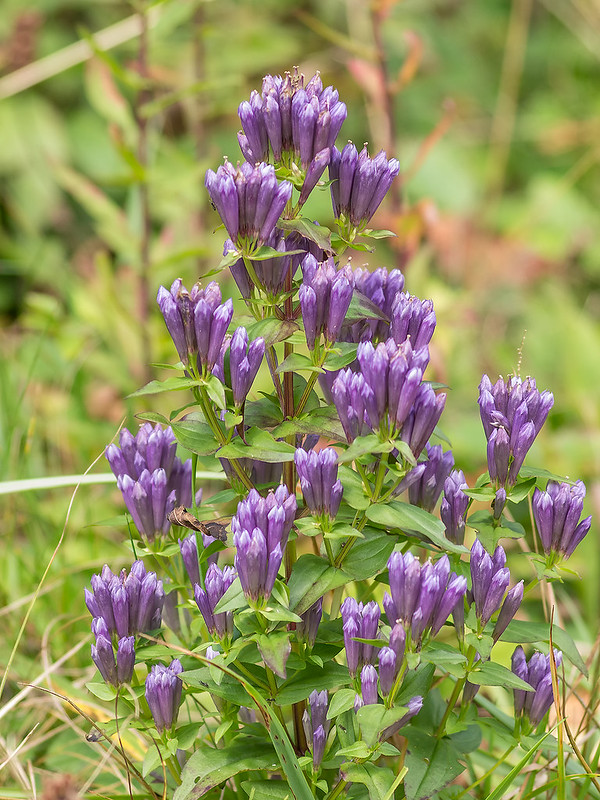 I hope you have enjoyed this little foray into some of the Gentianaceae of the Southeast. This family of plants is one of my favorites, not only because of the wide range of vibrant color, but because many of them can be found close to home. When many of the other summer wildflowers have gone to seed, this family of flowering plants is just getting started. Only the heavy winter frosts can put a damper on these beauties in the Southeast.