Blood Root, that is… Sanguinaria canadensis or Blood Root is a beautiful little Spring ephemeral that was in great abundance at The Nature Conservancy’s Nine Times Preserve in Pickens County, South Carolina. I had made the 35-mile (56-km) trip hoping to catch the last of the Erythronium umbilicatum or Dimpled Trout Lilies, but I was a few days too late. They don’t call them ephemerals for nothing. Like the Trout Lilies, Blood Root flowers don’t last more than a couple of days, but as a group, they will be in bloom for a week to ten days. Fortunate for me, there were hundreds in flower on this day with many more in seed. Here is a shot of one in full bloom: 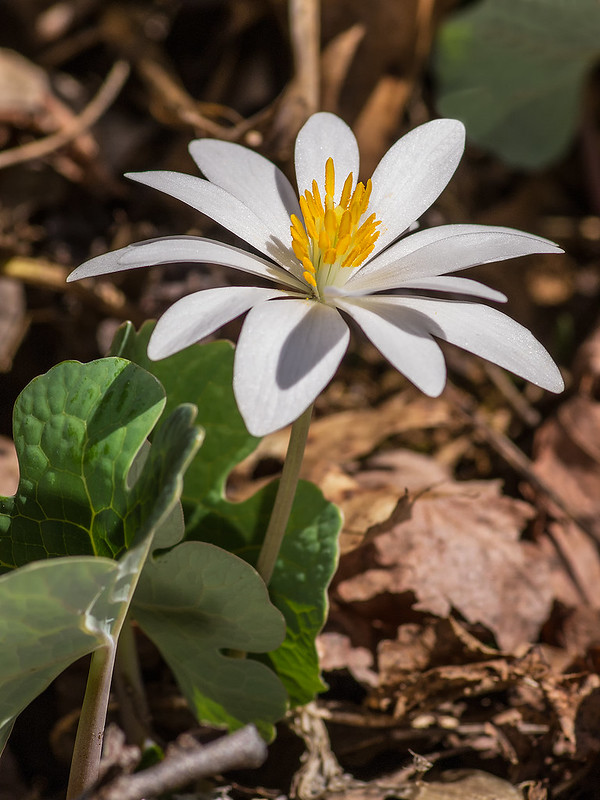 It is said that early Native Americans used the bright red sap of the rhizome for skin decoration. I don’t know the truth of that, but here is an image which shows the reddish rhizome with the rest of the plant attached. I found this next to one of several small holes I saw while photographing the flowers. I can only assume that it was dug up by squirrels or turkeys, since wild pigs would have left a much larger mess: 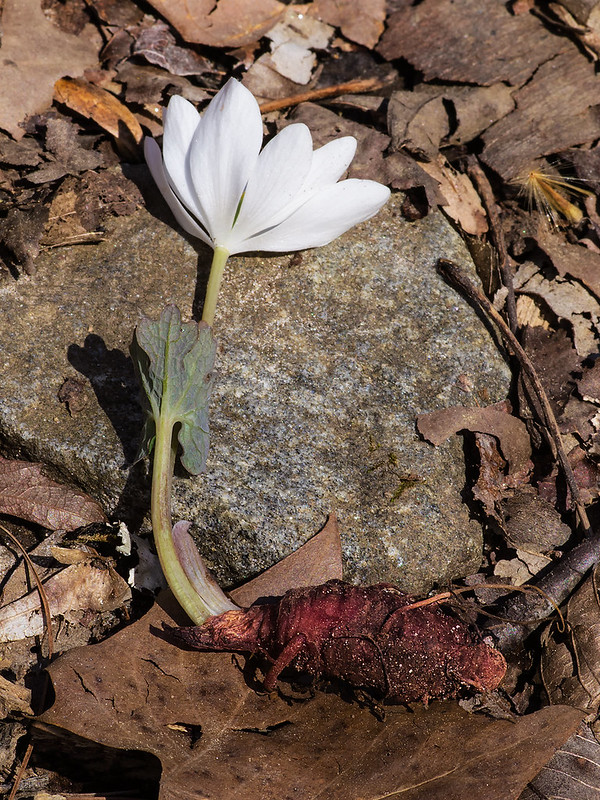 I replanted it, and I hope it survives. Here is a shot of a Blood Root plant in fruit: 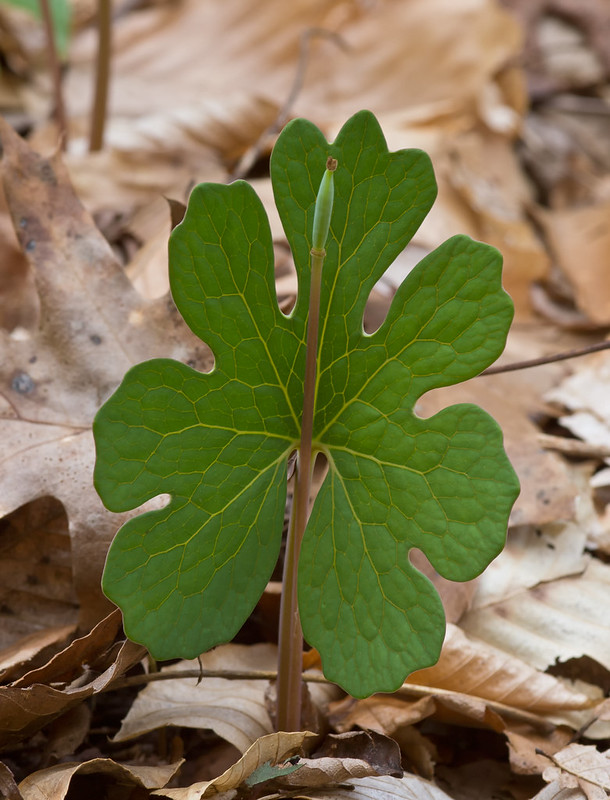 As I mentioned, there were many, many specimens of Blood Root at the site — some in full sun, but most in dappled shade. Here are a few examples:

I like the way the leaf appears to clasp or curl around the stem of the flower. This makes for a neat presentation of the flower in the image.

I even managed to capture a couple of flowers together in the same shot: 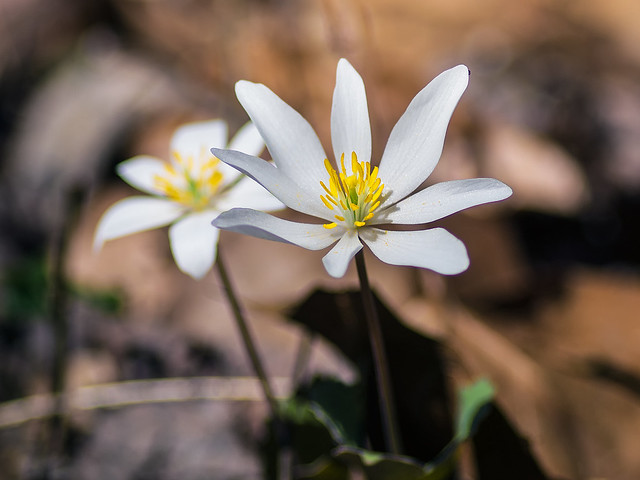 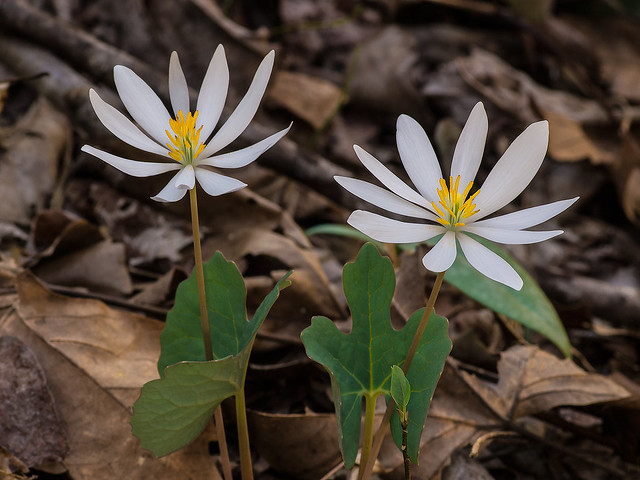 As you have probably noticed, the number of petals on the Blood Root flowers varies from 8 to 12 or more. Years ago, I actually saw a double one with 24 petals. Not only does the number of petals vary, but also the shape of the petals. Some of them are more pointed while others have petal tips that are more rounded. I suppose this is just a part of natural variation.

Fortunately, Blood Root was not the only wildflower in bloom at Nine Times. Another species that was in great abundance was Thalictrum thalictroides or Rue Anemone. By the time I decided to photograph these beauties, the wind had picked up and made photography quite a challenge. Even in the slightest breeze, the flowers twist and turn so that it is almost impossible to get a good shot. Here are a few that I managed to capture during a lull in the wind: 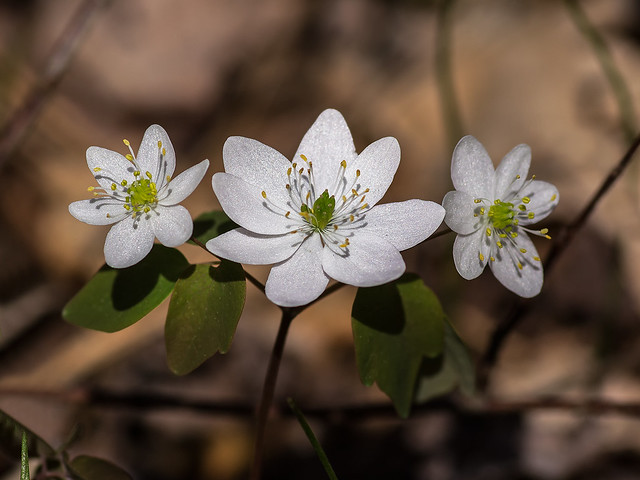 Although the Viola sororia or Common Wood Violets were not all in full bloom, I did find one that was quite presentable: 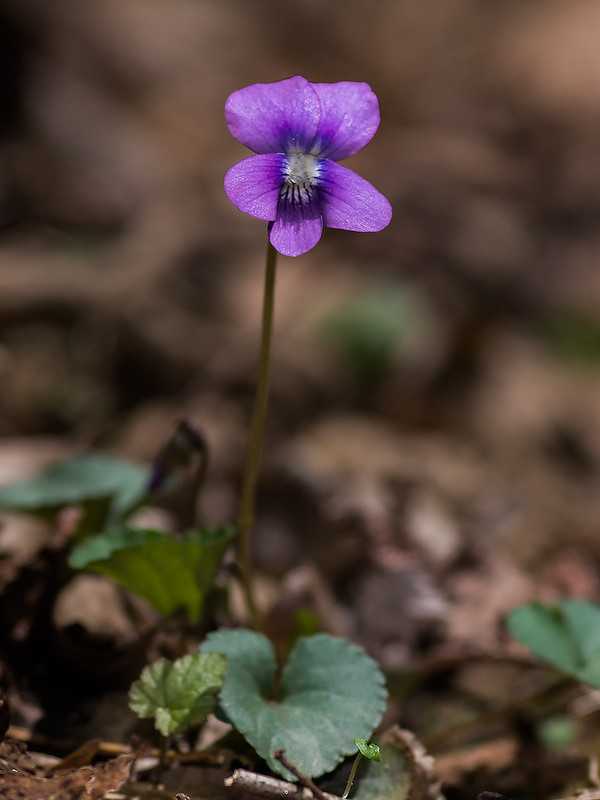 In another part of the site, across the creek, I located several groups of Hepatica acutiloba or Sharp-lobed Hepatica. During my recent visit to Station Cove Falls, where I usually see large numbers of them in bloom, I was a bit late, and almost all of the flower petals had dropped. But at Nine Times, they were in perfect form:

Here is one with a critter attached. It spent an inordinate amount of time on the flower — I assume it was gathering nectar: 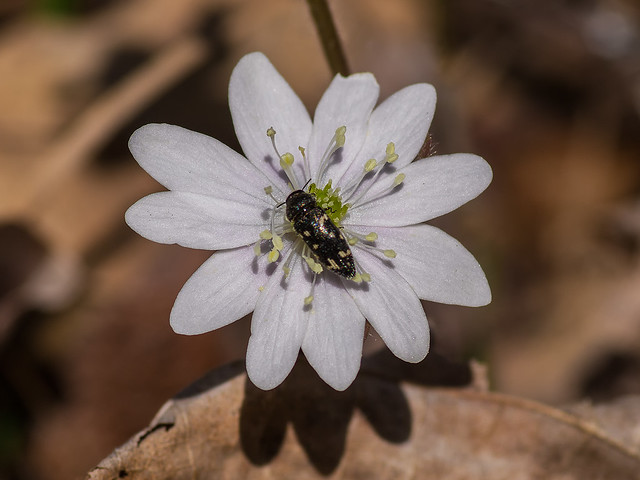 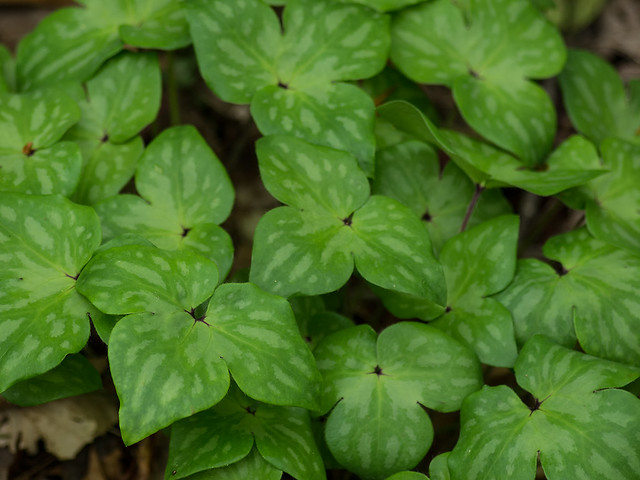 On the other hand, the leaves of Rue Anemone appear much higher on the stem, directly under the flowers, and they have a smooth, hairless stem: 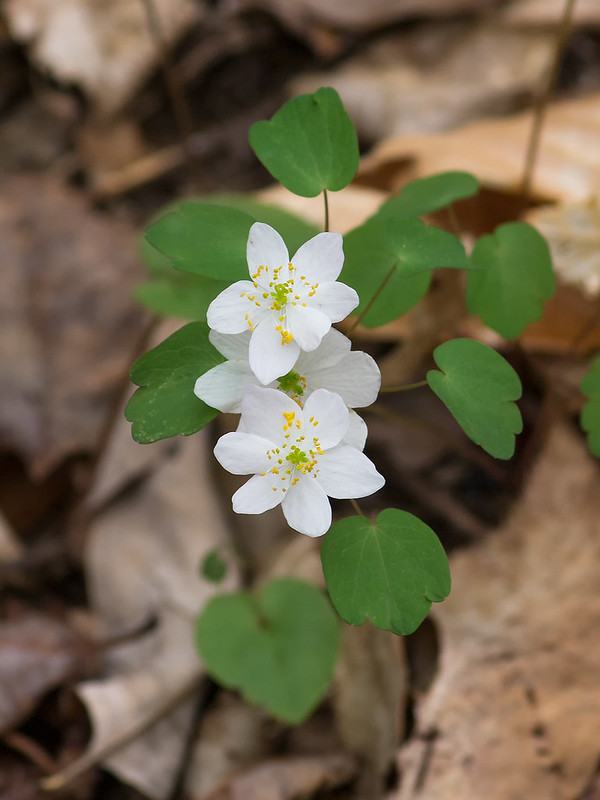 Nearby, I saw the newly sprouted plants of Trillium discolor or Faded Trillium, about a month from being in full bloom: 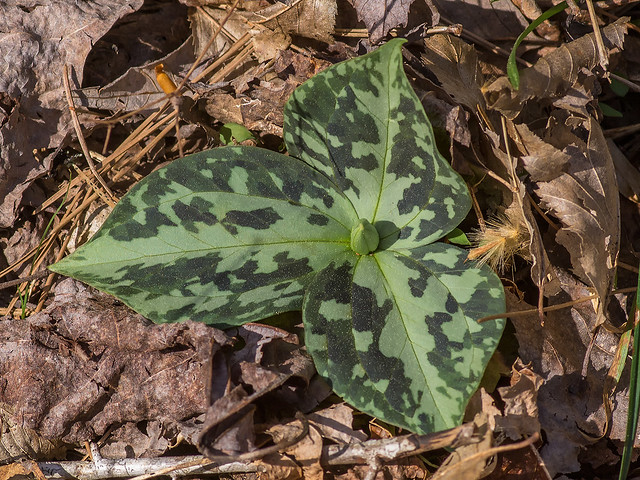 At this stage, they are still hugging the ground. When in full bloom, they will be several inches off the forest floor. Here is a shot of them that I took last year on April 24 at the same location: 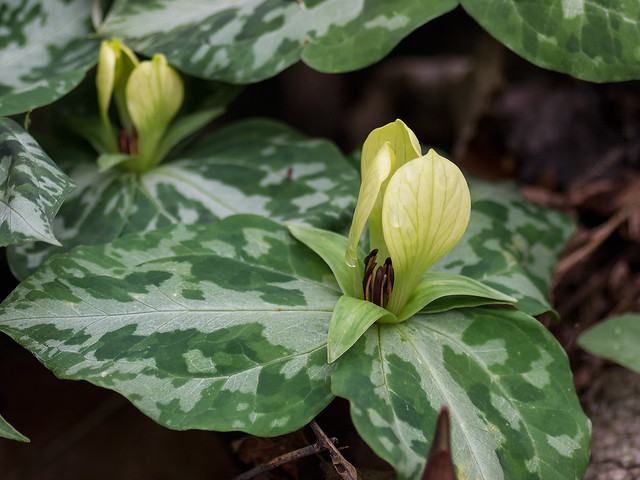 Within a few feet of the Faded Trillium, I re-located a small group of Galearis spectabilis or Showy Orchis. I wasn’t sure I’d be able to find them, especially since it was such a small group, and it had been a full year since I had last seen them: 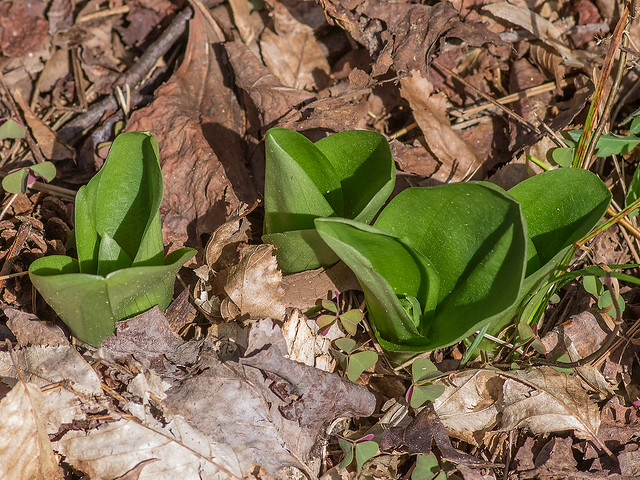 I closely inspected each plant, and I believe that each one of the four will bloom this year. Here is what the same group looked like in full bloom last year when I visited Nine Times Preserve with my Indiana friend, Lee Casebere: 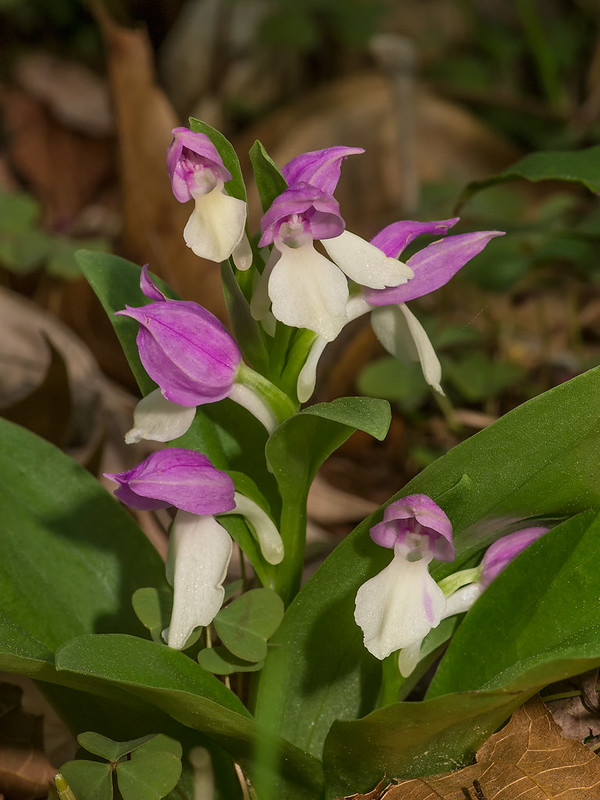 This brings to a close my visit to Nine Times Preserve. Although I was too late to get any photographs of the Trout Lilies in bloom, I did find several other beautiful wildflower species. This is a fantastic place to visit in the Springtime. Even if you come during the time of year when you find no blooming wildflowers, a leisurely stroll along Little Eastatoe Creek is worth your while. During certain times of the year, both Brook Trout and Rainbow Trout are released and are a favorite of fly fishermen. It’s not unusual to see fly-fishermen and wildflower photographers in the same area, each engrossed in their own form of pleasure.

After packing up my camera gear, I decided to go back home via Hwy. 11, passing the iconic Table Rock Mountain in Table Rock State Park: 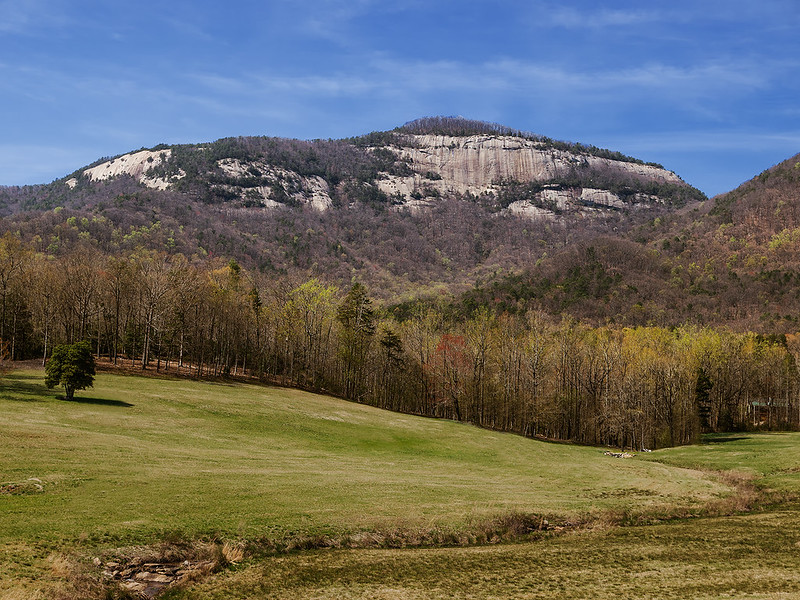 This is a major landmark in the upstate, and is a prominent example of the Blue Ridge escarpment, rising more than 2000 feet (600+ meters) from its base. I’ve actually seen hang gliders take off from the top of the mountain and land in the field below. I don’t know if hang gliding off Table Rock is legal, but I’m sure it is an exciting thing to do — just not for this photographer — I might just end up breaking something that is really important! 😉