Fall orchids and other wildflowers in the Pisgah National Forest, North Carolina — 2016-09-10

Just the other day, one of my blog subscribers let me know that she had found Spiranthes ovalis var. erostellata or October Ladies’-tresses orchid near the Davidson River in the Pisgah National Forest. This area is in Transylvania County, North Carolina, and I am somewhat familiar with the site she described. So, this morning, I loaded the truck with some snacks and my camera gear, and headed up the road about 1 hour and 45 minutes to the site. The only other sites I know for this orchid species are much farther away in the central or eastern central portion of the state, so I was pleased that some had been found closer to home.

It was quite easy to locate the exact spot where the orchids were growing because she had gone the extra mile to give me detailed directions. When I arrived, though, there were throngs of kids preparing to go tubing in the river. In addition, there had been a stocking of trout recently, and the fishermen were out in droves trying to catch the last one. Some were lucky, proudly showing off their strings of foot-long trout.

I’m used to getting curious glances and questions from onlookers, it’s a professional hazard, and I do my best to determine if the onlookers might be a threat to the plants. The majority of the time, I tell people I’m photographing mushrooms or “wildflowers”, and they accept that as truth. Sometimes, they want to examine the plants/flowers, but since the plants/flowers are usually quite small, they soon lose interest. That’s fine with me.

Anyway, back to the orchids…

These particular ones were quite a bit smaller than others of the same species I’ve seen. These were from 3 inches (7.5 cm) to 10 inches (25 cm) tall. As you will notice, the flowers do not fully open. But opening is not necessary, since the flowers are self-pollinating, so the need for a pollinator such as a bumble bee is moot. I found 12 flowering plants and two leaf rosettes without flowers. Here is an image of the nicest one: 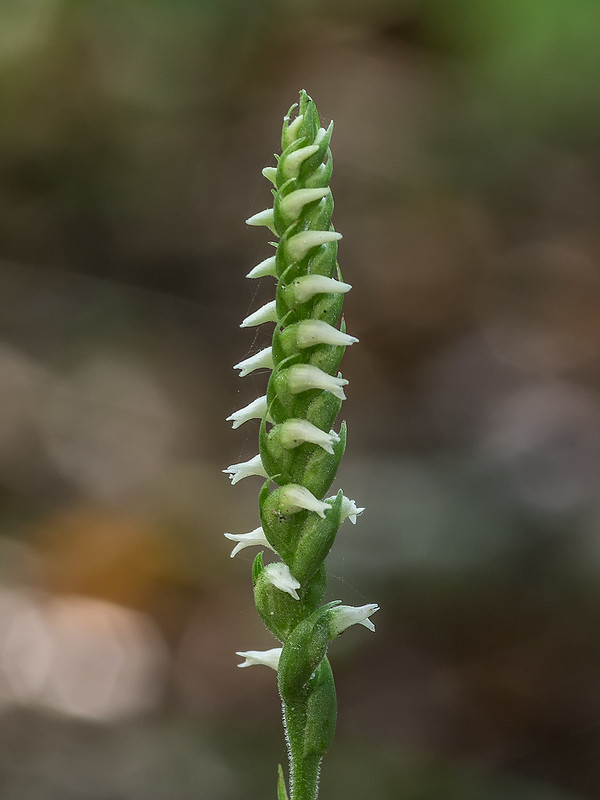 This Spiranthes species keeps its leaves when it is in bloom. Some of the other Spiranthes species have withered leaves at bloom time. Not only does it have its basal leaves, it also has several leaves on the flowering stem, each smaller than the lower one on the stem. These stem leaves appear up to about the half-way point of the stem. Here is an image of the stem leaves: 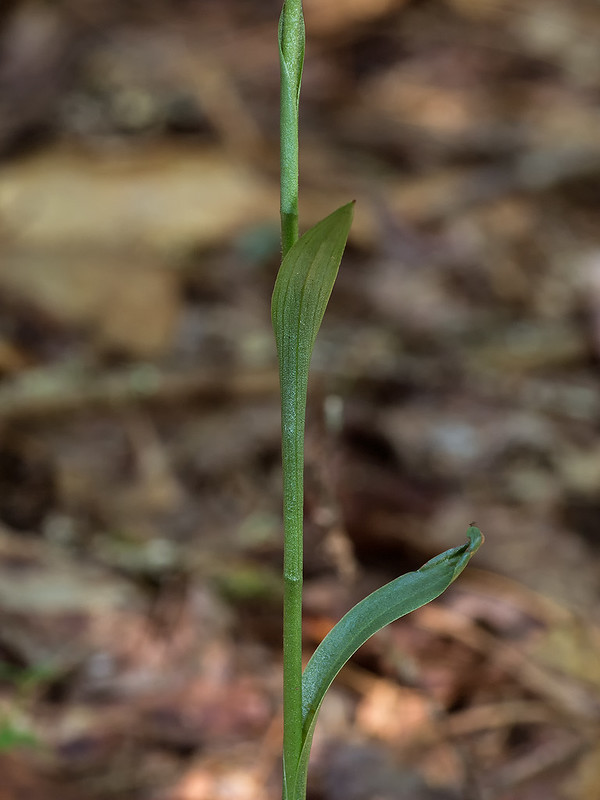 And here is what the basal rosette of leaves looks like on a non-blooming plant. This one was about 3 inches (7.5 cm) across from leaf tip to leaf tip: 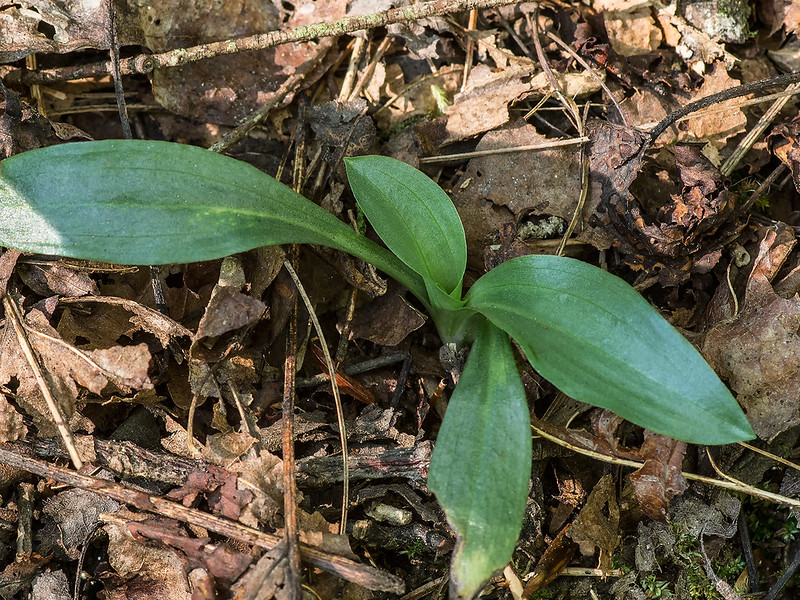 The following images are of three of the other blooming plants at the site: 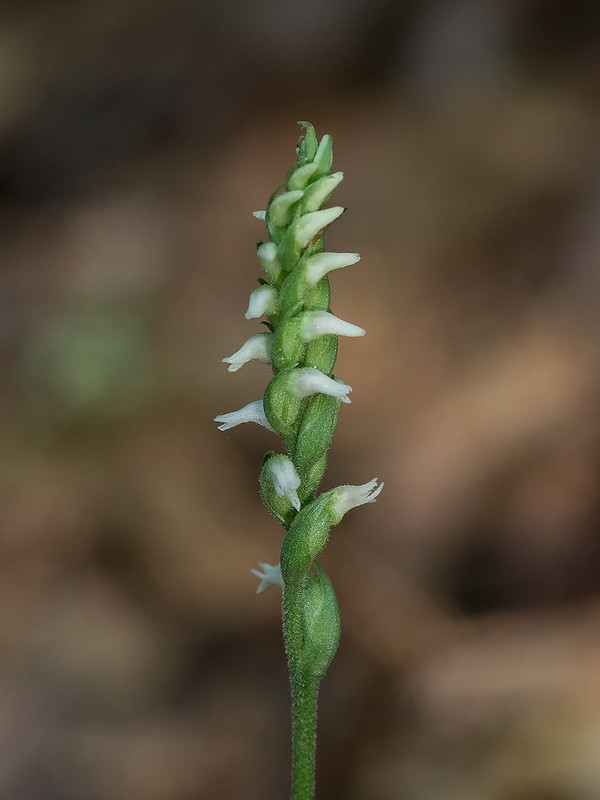 After photographing these plants, I wandered down the river bank. curious as to what else I might find. The entire area was made up of open woods, and that is the perfect place for other orchid species. I knew it was near time for Corallorhiza odontorhiza or Autumn Coral Root orchid to be in bloom. It prefers a damp, not wet environment made up of deep natural humus or duff. Sure enough, as I began to wander a trail along the river, I found several of the orchid plants within a short distance of the trail.

The plants are not very big — about 3-4 inches (7.5-10 cm) tall. And the flowers are certainly not what one would describe if one were describing an orchid flower. There are two flower forms for this species. One, the most common, at least in our region, is the closed, self-pollination form. The other is the open form which is thought to require a pollinator. Although I have never had the opportunity to photograph the open form, I understand it is more common in the northern states. Some even give it a varietal name: Corallorhiza odontorhiza var. pringlei. The first plants I found were of typical yellow-green color with the typical, closed flowers:

The swollen portion is the seed capsule. The flowers of this form are self-pollinating and begin producing seeds shortly after the plant pokes out of the leaf litter. They don’t need to waste any time waiting for a pollinator to visit. The beak-shaped portion at the apex of the seed capsule is the corolla or flower. The white portion of the flower is the underside of the lip. Not much to write home about — eh? It was good to see these again, because it had been a full year since I had photographed them.

After photographing these plants, I continued my wandering and soon found something quite unusual. I found another patch of Autumn Coral Root orchids, but these were very different. The stem, rather than being greenish tan, was a reddish tan, even dark red in a few of the plants. Here are a couple of images of the largest of the plants in this population:

Notice how the red color has also migrated into sections of the seed capsule. Also notice the white portion of the flower which is the underside of the lip. Here is another one with a magenta-red stem and golden seed capsules: 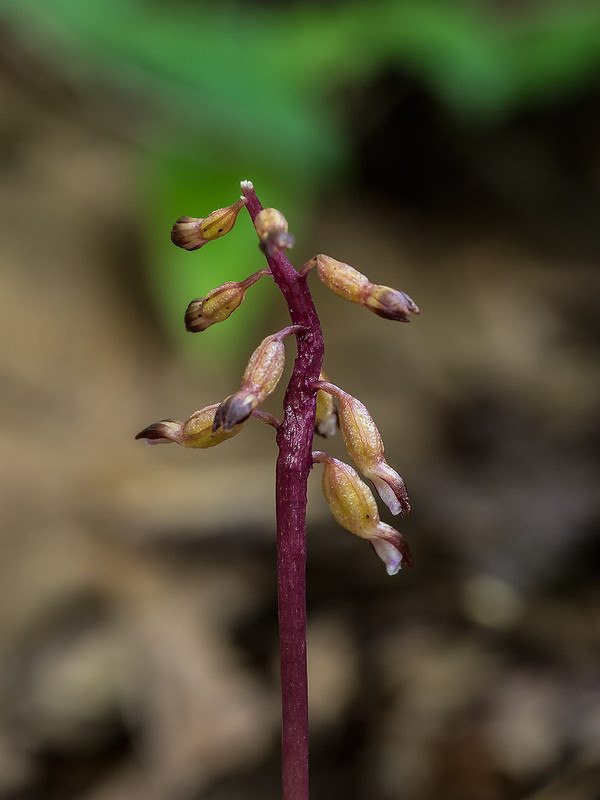 I finished with these plants and made my way back up the trail toward my truck. On the way back, I found another smaller population of 5 or 6 plants. Again, these had reddish stem, but low and behold, there were a few with open flowers!:

These don’t look like the ones in the pictures I’ve seen from the northern states, but they none-the-less have open flowers.

I found one particular plant that had a few flowers positioned at such an angle that I could photograph inside the open flower parts: 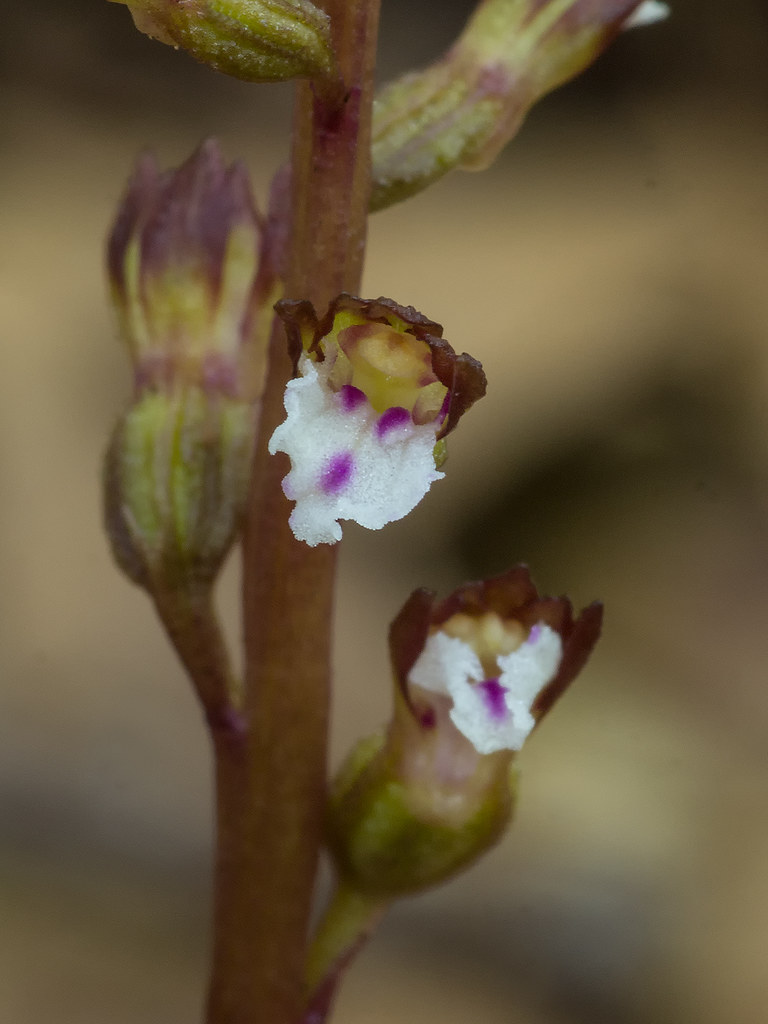 I was really pleased to have found these.

Across the trail, I could see some pink flowers, so I decided to check it out. These are the flowers of Desmodium paniculatum or Panicledleaf ticktrefoil, the seeds of which are those awful round green things that stick to your pants leg, shoe laces, and socks. I was very careful not to get in among them while photographing the flowers: 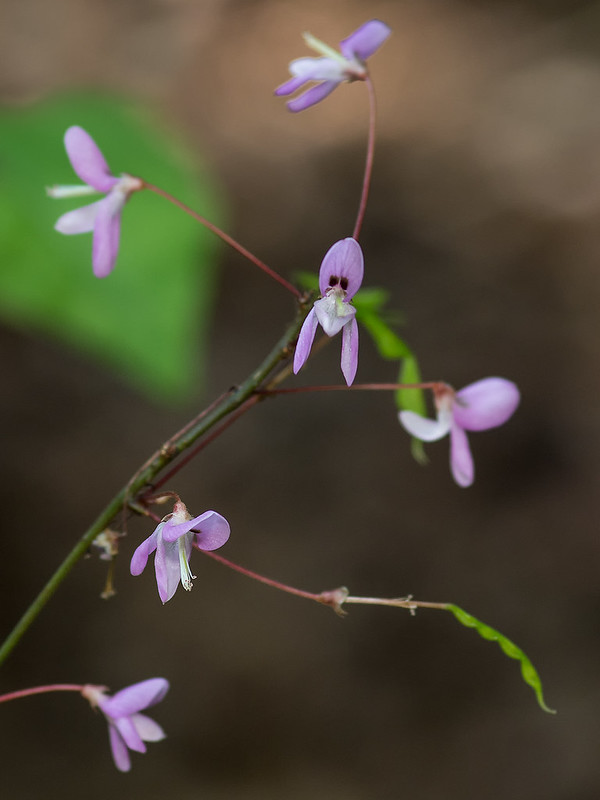 Having finished my photography at the Davidson River site, I wanted to visit another location for Autumn Coral Root orchids that my friend Sam and I found this time last year. It was about 6 miles (10 km) north of my current location, and there are several wildflower spots in between. As I was getting into the truck, I caught a glimpse of a blue flower next to the parking area. This turned out to be the beautiful although fairly common Lobelia puberula or Downy Lobelia: 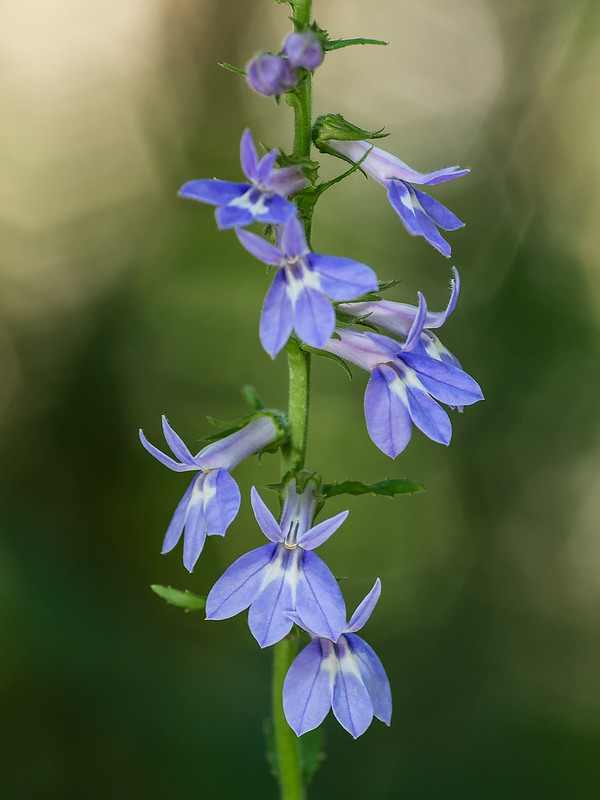 I took a quick shot and drove up the road, dodging the dozens of bicyclists that were participating in a bike race. I don’t know why they let bikers and motorist drive on the same route, but I think that’s what happened. I soon made it to the other Autumn Coral Root orchid site, not being able to pull over at some of the other wildflower sites because of traffic and lack of parking spots which were taken by fishermen. Fortunately, there are a number of wildflowers at the site, and several of them were in bloom.

The first one I saw was the colorful, Chelone obliqua or Red Turtlehead. These plants grow in the wetter portions of the roadside and have long stems that drape over the ditch. The flowers were just beginning to open, and the next couple of weeks should bring quite the show. There were only two clusters of Red Turtlehead open on this visit, and I took some shots with varying magnification:

The second cluster of open flowers was particularly colorful: 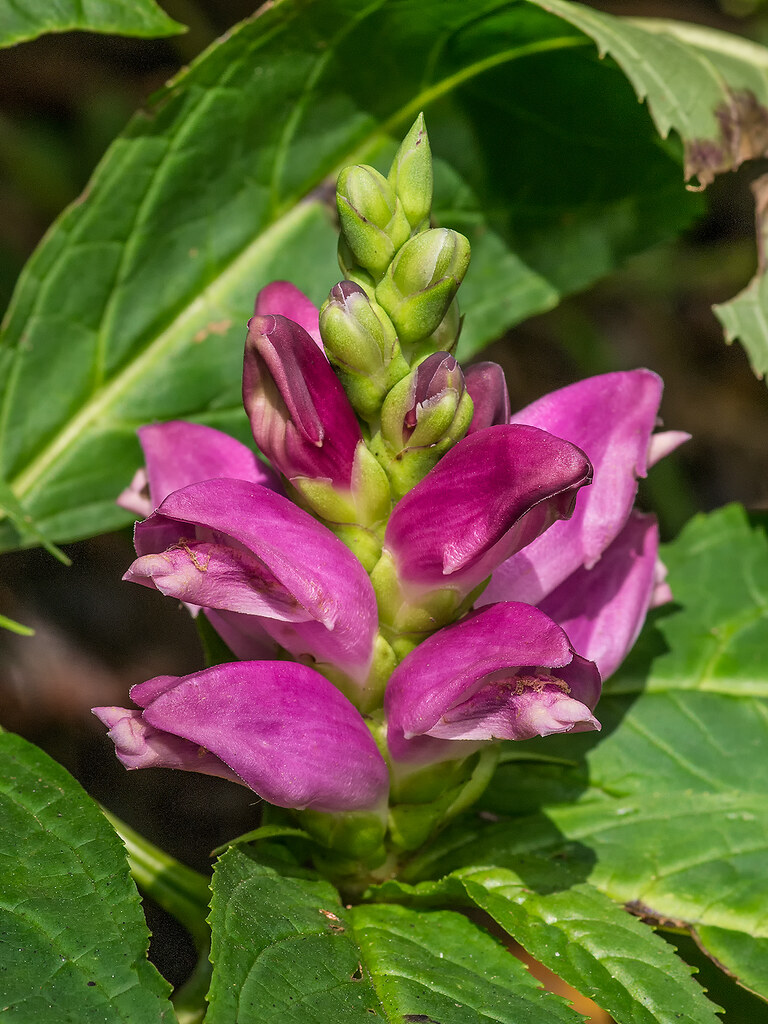 Next to the Red Turtlehead plants were the vibrant red clusters of the fruit of Arisaema triphyllum or Jack-in-the-Pulpit: 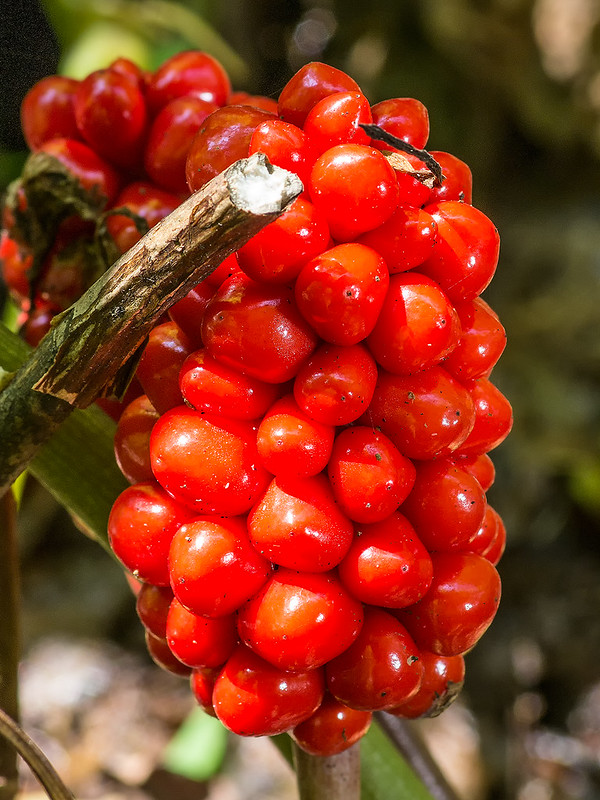 This is what the Jack-in-the-Pulpit looks like when it is in flower: 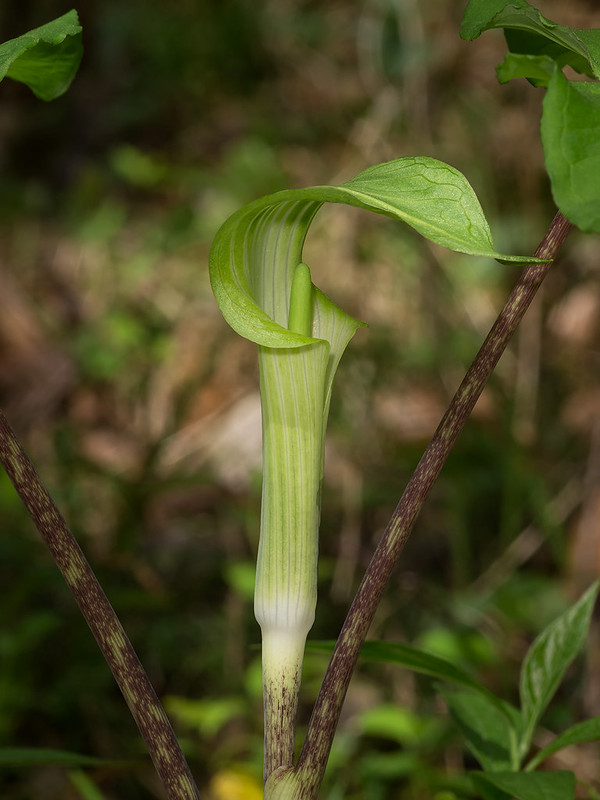 As I approached the spot where we had seen the Autumn Coral Root orchids last year, I spotted some plants of Collinsonia canadensis or Horse Balm: 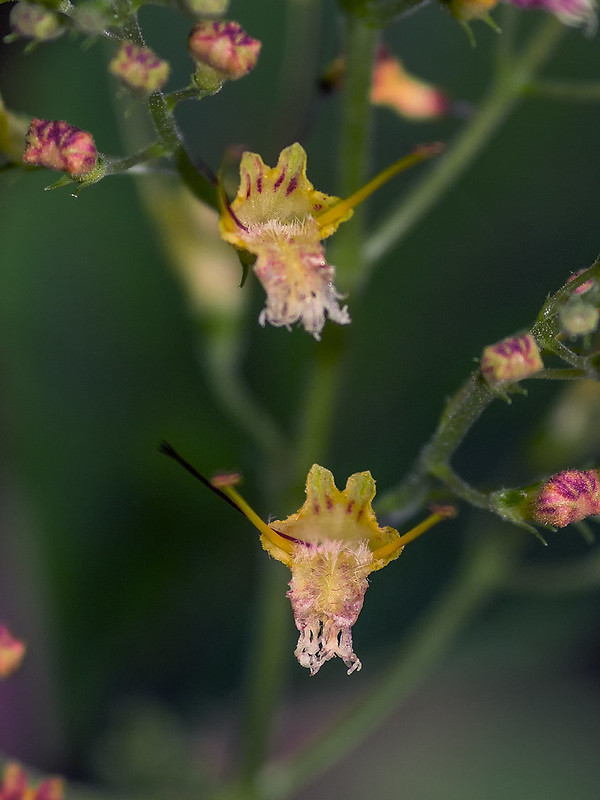 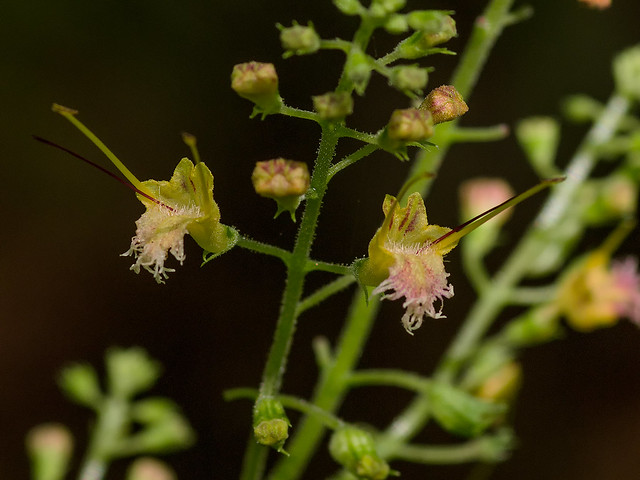 I don’t know why it takes me so long to get to the finish line. Yes I do — I am easily distracted by shiny objects… I found what I think are the leaves and flower stem of Liparis liliifolia or Lily-leaved Twayblade orchid. I hope so, because they are so easy to get to. I’ll make sure I visit this spot next spring: 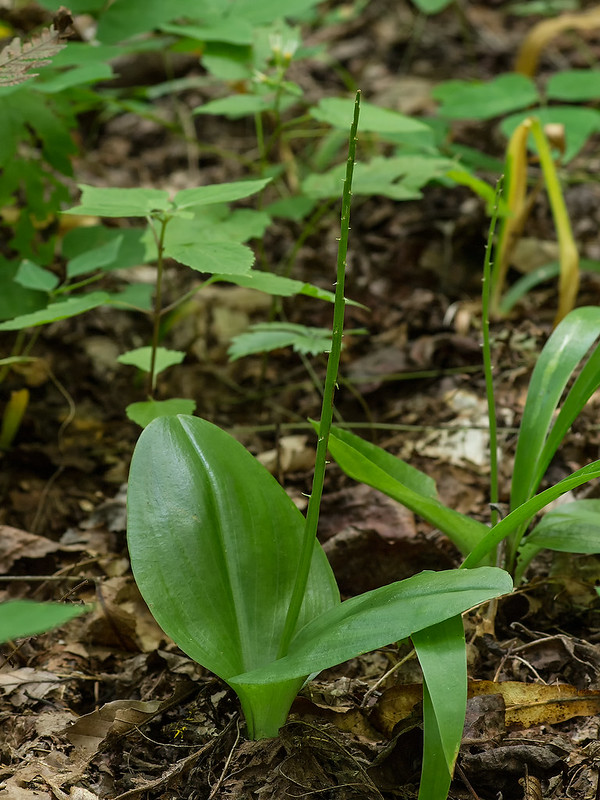 Finally, I reached the Autumn Coral Root orchids. Last year there were less than a dozen blooming plants; this year, there must have been almost three dozen of them! These were the typical green-stemmed ones:

And growing right next to that last one, what do I find but the seed capsule of Triphora trianthophora or Three-birds orchid! They must be everywhere in the Pisgah National Forest: 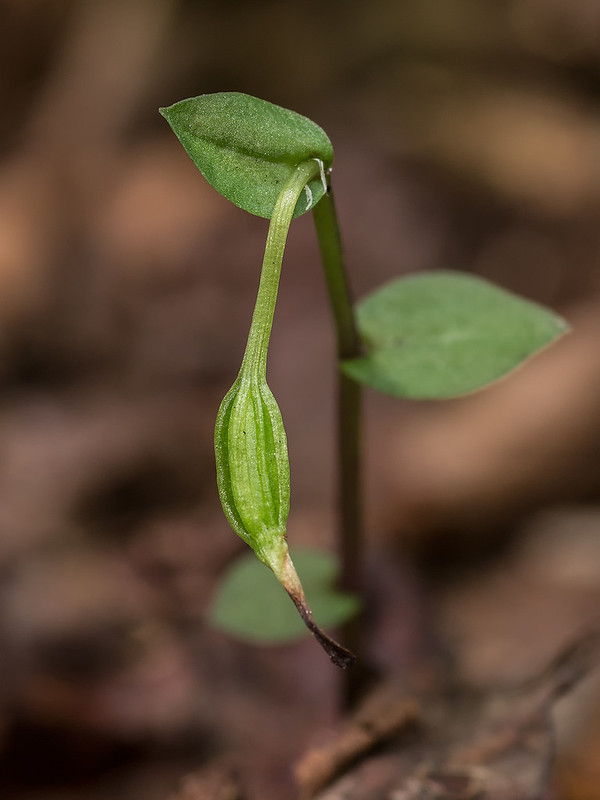 I saved the best for last. There was one group of about eight plants of Autumn Coral Root orchids, growing right next to the road: 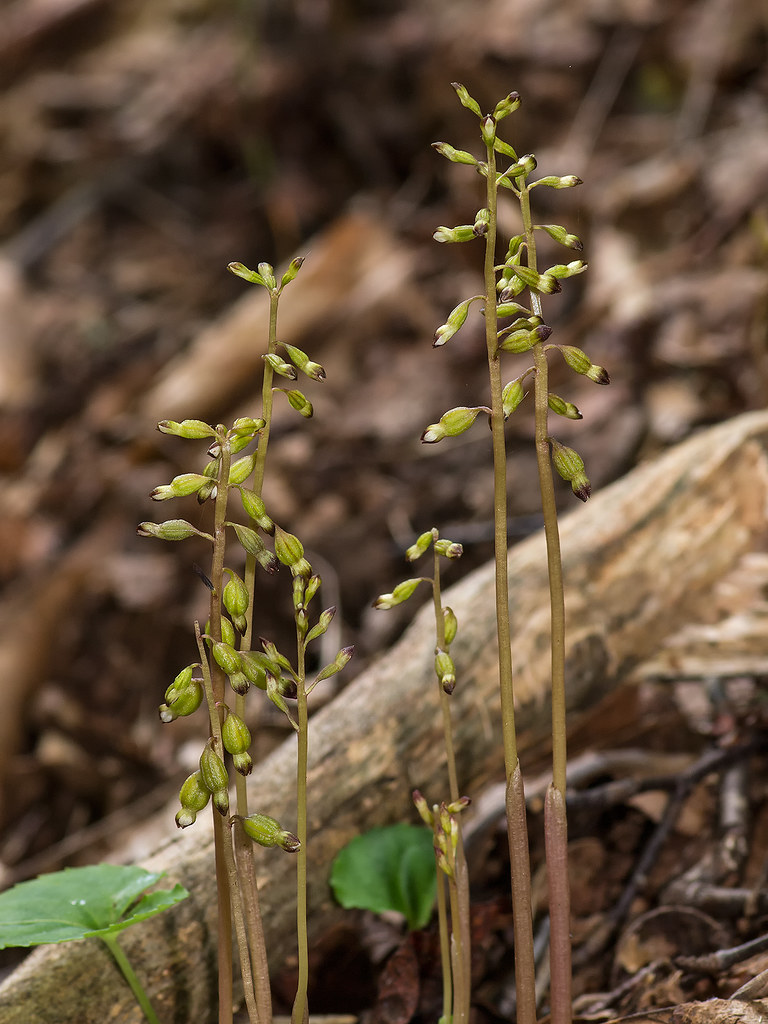 Another great day in the field! I like to go out with one goal in mind and end up finding something entirely new. Thanks to one of my blog subscribers, I now know a new site for October Ladies’-tresses orchid. I’m thinking that I’ll be visiting one of my favorite overlooks on the Blue Ridge Parkway next week if the weather holds out.