Shortly after returning from my trip to attend the 2016 Native Orchid Conference symposium in Benson, Arizona, I joined a couple of new friends in the Pisgah National Forest. I had been in correspondence with John and Judy Kingston, residents of Beeston, Nottingham, United Kingdom even before I met them at the symposium. Like me, they are orchid enthusiasts and photographers. I was pleased to show them several orchid species in flower in the Pisgah NF: Platanthera ciliaris or Yellow Fringed orchid, Spiranthes lacera var. gracilis or Slender Ladies’-tresses orchid which were just holding on, and Tipularia discolor or Crane-fly orchid. The former two were new to them, and I could feel their excitement as they wandered around the roadside, remarking on the beauty and perfection of the flowers.

Toward the end of our visit to the Yellow Fringed orchids, we were honored by the appearance of several Battus philenor or Pipevine Swallowtail butterflies intent on getting the nectar of Yellow Fringed orchids, and at the same time, performing pollination of said flowers. The ones that I managed to photograph (not so clearly, I’m afraid) obviously had been quite busy with their activity, because their eyes were loaded with numerous orchid pollinia that were picked up from visits to other nearby orchid flowers. Here is an image of one of them feverishly at work on one of the orchid plants: 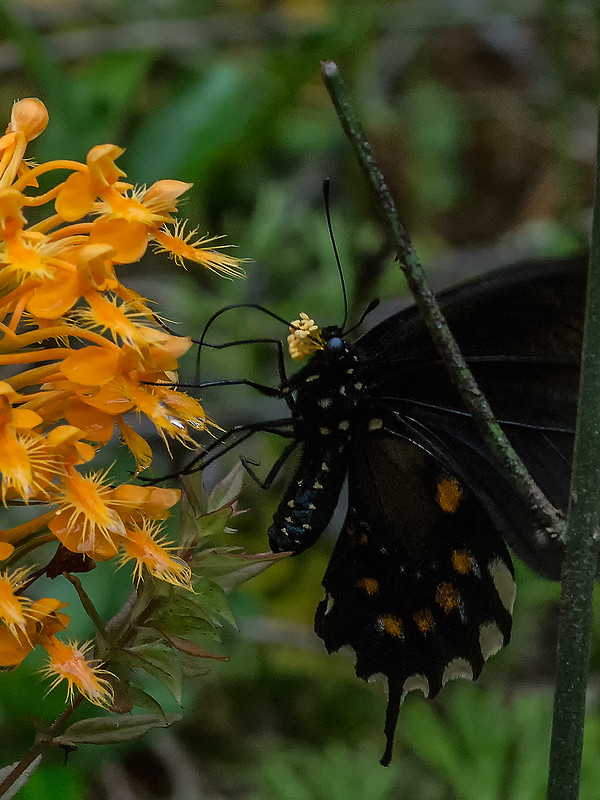 It’s a bit difficult to see, but the pollinia are attached to the butterfly’s multi-prism eyes. Here is how this works: As the butterfly probes the nectar spur with its long proboscis, it is forced to lean way into the flower to reach the bottom of the spur where the nectar is located. By design, the spur is never completely full of nectar. This ensures that the pollinator will lean far enough into the flower so that its eyes will come in contact with the sticky pads on the protruding ends of the pollinia. When this happens, the pollinia adhere to the eyes and are removed from their enclosing structure when the butterfly backs away. At the time of their removal, the pollinia spring into a position that will guarantee that they will come into contact with the stigma of the subsequent flowers that the butterfly will visit. Thus, pollination occurs.

It is said that the attached pollinia do not harm the butterfly, but I have noticed that when numerous pollinia are attached to their eyes, the butterflies do appear to be a bit disoriented, and will take a break from visiting the orchid flowers and alight on a nearby leaf to regain some semblance of orientation. Apparently, the pollinia fall off of the eyes on their own after a short period of time. Over eons, evolution has worked this tit-for-tat mechanism to perfection in order to accomplish its pollination goals.

Here is a mockup of a Platanthera pollinium. Note that unlike many other flowering species that you might come across, the pollen grains of most orchid species are coherent, waxy masses. The actual pollen grains of Platanthera ciliaris do not begin to separate from the mass until after the pollinium is removed from its protective sheath: 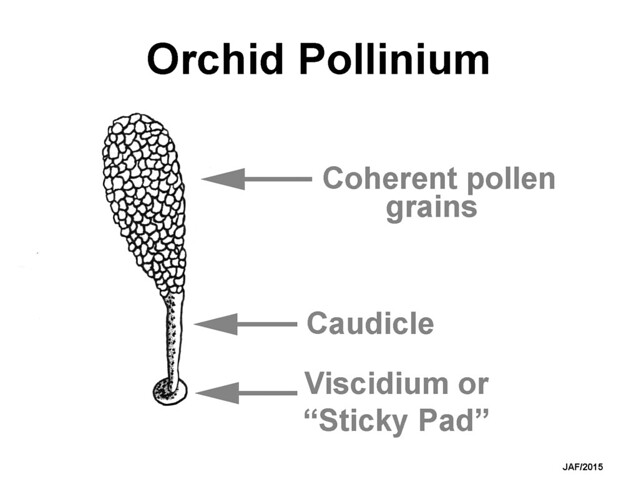 Here are some additional images of these butterflies doing their thing:

Here are a few images of some of the nicer orchid plants we saw at this site (without pollinators). And, yes, it was sprinkling rain a bit: 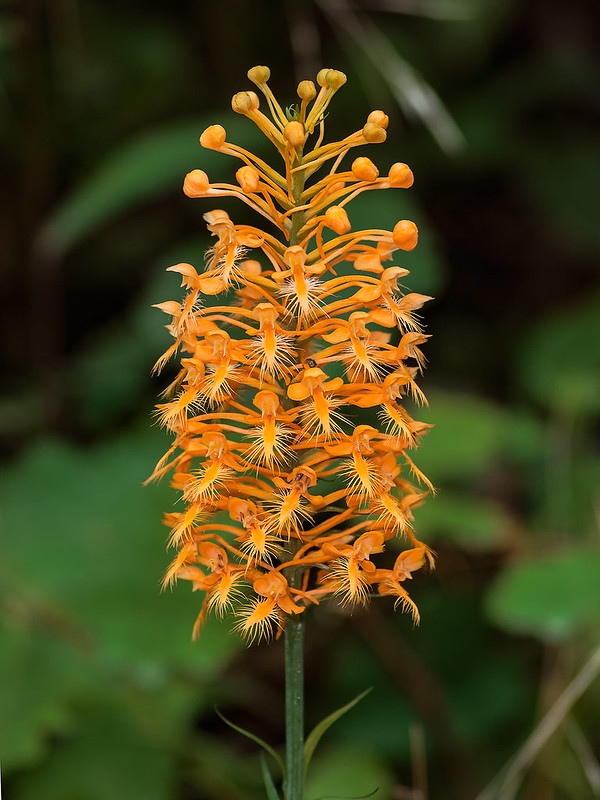 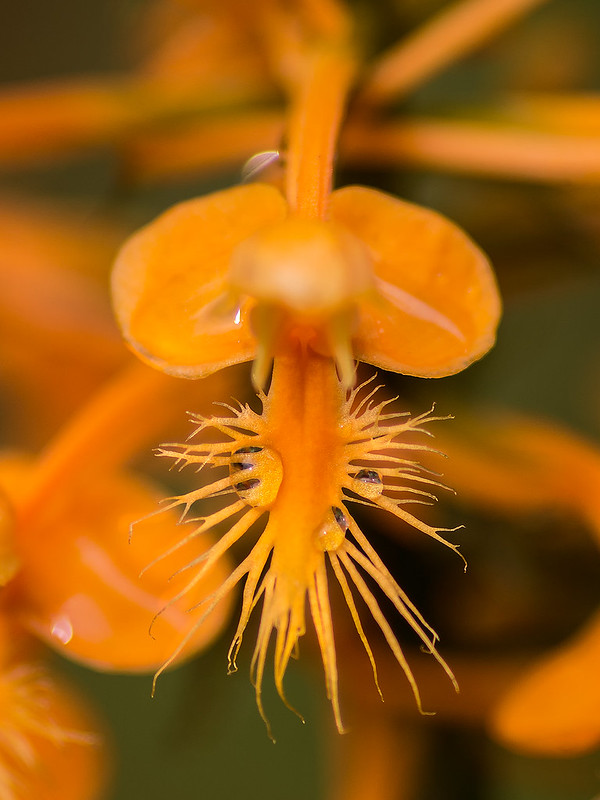 We finished our photography, talked a bit about the location and the pollinators, then said our good-byes and made our way out of the forest.

About a week later, I reflected back on our wonderful visit, and decided to drive up to the Pisgah NF one more time. It’s less than a 2-hour drive for me, and it is not much of a bother, being that it is quite refreshing and relaxing to be in the woods even if I don’t find any orchids in bloom. I arrived at my usual Three-birds orchid site, knowing that they had finished for the season, but I wanted to see what else I could find in the area. Upon parking and gathering my gear, I walked down the road just a short distance when I saw many tiny white flowers blooming in the roadside grasses. I immediately recognized this as Geranium thunbergii or Thunberg’s Geranium. This lovely species had evaded my notice for years until a dear friend, Liz Fox, had sent me some images of this species taken at a nearby, Blue Ridge Parkway location.

The flowers are quite small, coming in at less than 1/2 inch (~10 mm). But the color of the stamens and petal stripes make them very nice photographic subjects. Here is an image of one of the flowers: 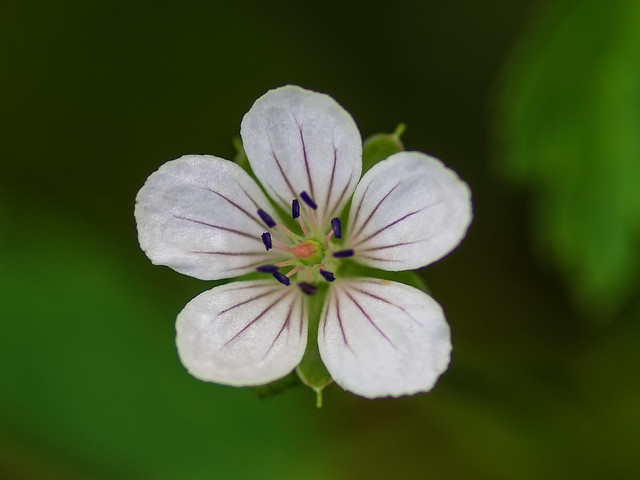 Being so near the edge of the road, it was a challenge for me to photograph the flowers in the sudden gusts of wind caused by passing cars. But it didn’t take long for me to notice the swarms of colorful Halictid bees that found the flowers to be irresistible. I believe the ones that I saw were Augochlora pura or Green Sweat bees. I have seen and photographed this particular species pollinating both Three-birds orchids as well as Downy Rattlesnake Plantain orchids in the area.

As I patiently waited for the traffic breezes to settle down, the bees were busy circling the flowers and apparently imbibing the available nectar. They seemed oblivious to my presence, allowing me to position my camera fairly close to the flowers for some close-up images. Here is the result: 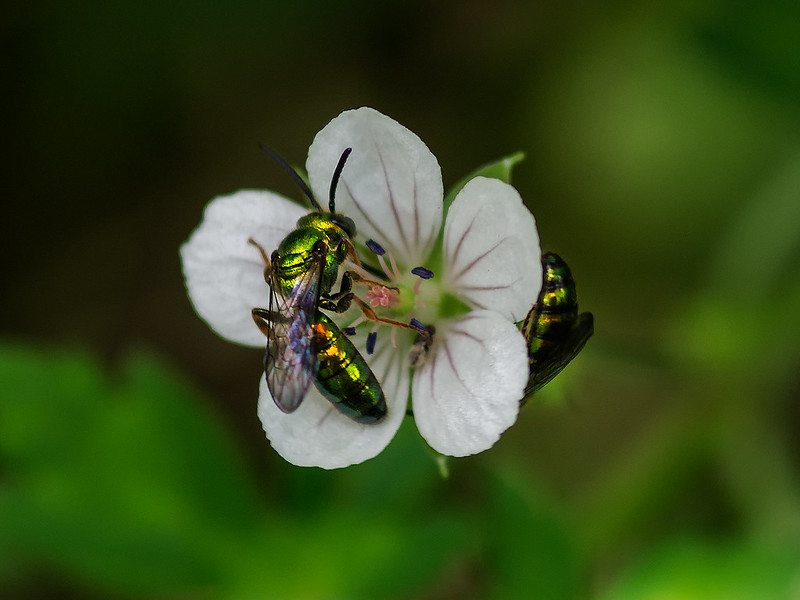 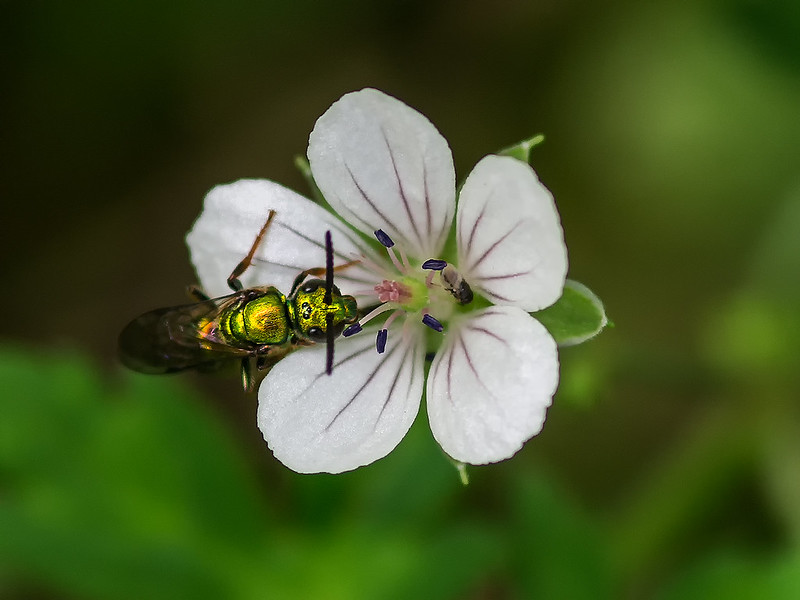 Who could possibly resist photographing these amazingly interesting insects? Although I’ve seen Thunberg’s Geranium on a couple of occasions, I had never witnessed it being pollinated by such a beautiful bee. It seems that I find something new every time I visit this location in the Pisgah NF. This makes my 4-hour round trip quite worth while.

In an earlier post, I postulated that I would not be posting again until late October when I make my annual late-fall pilgrimage to the Carolina coastal plain for some autumn orchids and wildflowers. Who knew? Now, I’m wondering what I’m missing at this moment in some of our local natural spaces… Hmmmmm….. maybe I should clean my camera lenses and recharge the batteries.